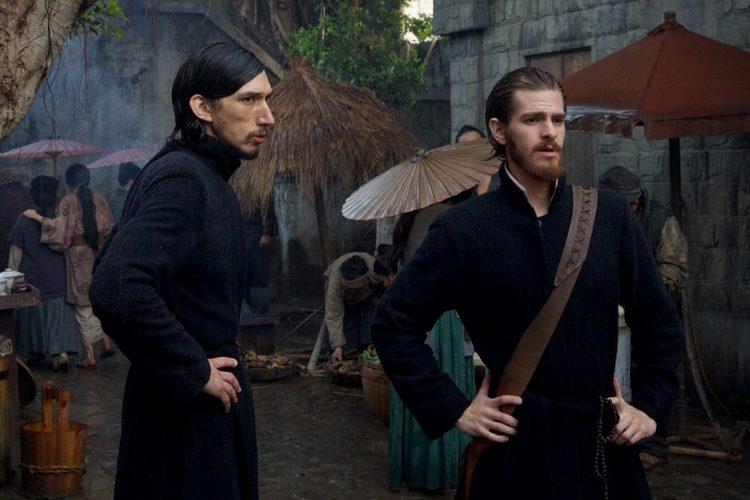 By now, we should be used to cinematic miracles from Martin Scorsese. But Silence, his 160-minute, decades-in-the-planning exploration of faith, is still something I don’t think I’ve ever seen before: a deeply redundant movie that isn’t at all boring. This sentiment was obviously not shared by the quartet of middle-aged patrons who exited the auditorium ahead of me complaining about the film’s length and dullness and their growling stomachs and the previews being “totally deceptive.” (Personally, I thought the trailers captured the haunting, enigmatic mood about as ideally as a three-minute spot, or a 30-second one on TV, ever could. Were these folks expecting Hacksaw Ridge 2: 17th-Century Gore?) Yet if you have the patience for it – and considering the many scenes of physical and emotional torture, the stomach for it – you may find the experience of Scorsese’s latest riveting. I may have been aware of the thematic and narrative repetition, but I never once yawned.

Silence, in its basic design, is strongly reminiscent of Apocalypse Now, albeit an Apocalypse Now that’s been heavily re-written by Terrence Malick. (Actually, Scorsese and Jay Cocks served as screenwriters, adapting Shusaku Endo’s hugely acclaimed 1966 novel.) Opening in 1640, the film tells of Portuguese priests Rodrigues and Garupe (Andrew Garfield and Adam Driver) and their search for missing mentor Father Ferreira (Liam Neeson), whose planned mission to convert the Japanese to Christianity has reportedly led to Ferreira’s renunciation of his faith. (As Ciarán Hinds’ elder priest tells Rodrigues and Garupe, their former colleague is now “living as a Japanese.”) Yet after the young Jesuits arrive on the island, their search, and particularly Rodrigues’, becomes about far more than finding one man. Rather, as the priests witness the persecution and murder of Japanese Christians and Rodrigues himself is captured, it’s a search for answers to life’s unanswerable questions, including perhaps the biggest one of all: If God indeed hears our pain, why does He remain so insistently silent?

Spoiler alert: Scorsese doesn’t tell us. But he asks the question, repeatedly, and with such growing fervor and intensity that the movie becomes something of a religious experience itself – a two-and-three-quarter-hour meditation boasting the visceral power of a fire-and-brimstone sermon and the quiet reflection of a prayer. When you look at the film in terms of plot-driven incident, not all that much happens, and it would be relatively easy to dismiss the work as “the Japanese toture and are tortured, Rodrigues watches in horror, Rodrigues soliloquizes in voiceover” in a seemingly endless loop. Yet the repetition proves utterly necessary for the theological queries that Scorsese raises. With so much human misery, and so much of the same kinds of misery, continually perpetrated over days and months and years and centuries – a far longer period than the piddly 160 minutes Scorsese is asking of his viewers – how does a loving God rationalize the suffering and His refusal to end it? And how do we rationalize our faith in such a being? 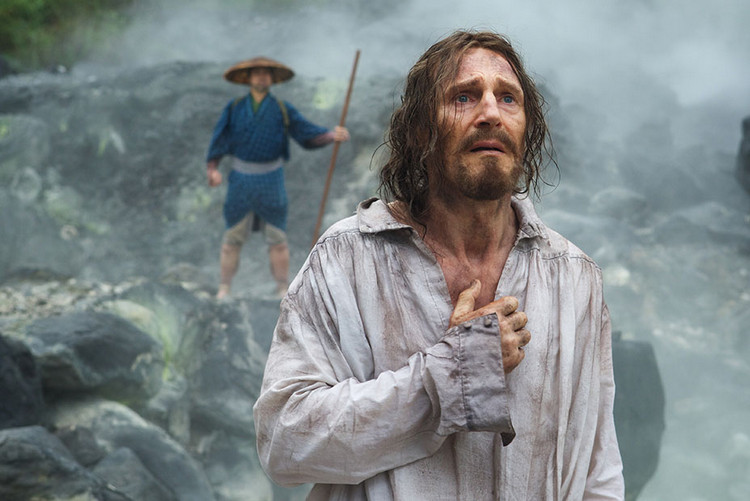 Viewed strictly as a movie, Silence isn’t without flaws. While Endo’s novel is revered for its artistry, Scorsese’s and Cocks’ dialogue is merely conventional, and some of the actions don’t match Rodrigues’ narrated commentary on them. (Mere minutes after being told that the priests have to remain completely silent in their sequestered hiding place, we’re given a scene of Garupe pounding rocks in that shack and loudly arguing with his fellow Jesuit.) And while Driver delivers a fine, conflicted turn and seems period-appropriate, Garfield – who’s on-screen almost constantly – is more problematic, his modern bearing and movie-star presence threatening to turn the film into yet another tale of nameless extras of color dying so one good-looking white guy with fabulous hair can Learn a Lesson. He’s sensational, though, when the script allows Garfield to go a little mad, as when Rodrigues stares at his reflection in a pond and sees his face transform into the visage of Jesus, the priest’s ensuing cackles suggesting a man at the very end of his emotional tether. (If asked to choose my favorite between Garfield’s 2016 portrayals of devout men of faith enduring atrocities in Japan, I’d definitely opt for his work in Silence over Hacksaw Ridge. The guy did have a specific niche last year.)

There are also numerous other perks amidst the anguish, from Rodrigo Prieto’s suberb, mist-laden cinematography to Scorsese’s expertly executed scenes of suspense, as well as magnificent performances by Japanese actors Yosuke Kubozuka, Tadanobu Asano, Yshi Oida, Shinya Tsukamoto, and especially Issei Ogata, whose drop-ins as a grinning, sadistic inquisitor I could happily watch all day long. (Stealing his screen time like a Kabuki Christoph Waltz, Ogata pulls off one of the most thrilling pieces of physical acting I’ve ever seen when, after being insulted by Rodrigues, the inquisitor slowly coils his body with rage, seeming to melt into the floor à la Margaret Hamilton at the end of The Wizard of Oz.) What truly makes Silence resonate, however, are its intangibles – those sensations of hope, fear, inspiration, despair, and deep wonderment that Scorsese evinces throughout this passionately unresolved work. You may not leave the film feeling great, but unless you’re somehow able to immediately erase the experience like those fellow patrons of mine did, God knows you’ll leave feeling something.

For my money, few movies are more subversively satisfying than the ones that convince you their leads actually aren’t the assholes they eventually turn out to be. I still get a kick out of 2009’s The Informant!, with the escalating criminal stupidity of Matt Damon’s agro-business rep, and 2011’s Young Adult, with Charlize Theron, in the end, proving that her alcoholic novelist was an even more loathsome narcissist than her behavior kept telling you she was. Although it’s a lesser work, I think The Founder might have similar repeat-viewing appeal, primarily because Michael Keaton is so fiendishly alive as McDonald’s mogul Ray Kroc that it hits you like a slap in the face when this mostly cheerful, homogenized bio-pic proves nastier, and more nihilistic, that you ever thought it was capable of being.

The tale of how milkshake-machine peddler Kroc turned a small hamburger stand in San Bernardino, California, into a global franchise – one that, as we learn in a startling postscript, feeds 1 percent of the world daily – The Founder begins as the sort of benignly reverential bio-pic we might expect from The Blind Side and Saving Mr. Banks director John Lee Hancock. Its images are as squeaky-clean as the upstanding McDonald brothers (Nick Offerman and John Carroll Lynch, both excellent) who buy into Kroc’s wheeling and dealing, and while the saga is engaging and historically interesting, it’s also, for its genre, deathly predictable. A rags-to-riches narrative, with all the traditional signposts, for our can-do hero? Check. A nagging wife (Laura Dern) who doesn’t believe in his dreams? Check. An overbearing score (by the usually-more-subtle Carter Burwell) telling us exactly how to feel at every given moment? Check. Embarrassing romanticization of the McDonald’s dining experience? Check. (Kroc delivers a lengthy monologue about how incredible the fries are. Like anyone needs to be told that.) Despite Keaton’s blessedly manic energy, the movie is so bland for such a long time that it's no surprise when King Bland himself, Patrick Wilson, shows up in a supporting role.

But bit by bit, events begin to become a lot more gripping. Kroc starts brazenly hitting on Wilson's beautiful wife (Linda Cardellini) directly in front of him, and she doesn’t hesitate in flirting back. A shady lawyer (the ever-phlegmatic B.J. Novak) convinces Kroc to start purchasing land, which he does to make his limiting contract with the McDonald brothers meaningless. The initially jovial gleam in Keaton’s eyes begins to subtly morph into a stare of soulless, capitalistic venality. Kroc starts saying things such as “If my competitor were drowning, I’d walk over and put a hose right in his mouth.” And then Keaton/Kroc starts getting really vicious. The Founder starts out as a friendly, unthreatening, feature-length McDonald’s commercial and turns into a juicily enjoyable cautionary tale oozing nothing but threat, and by the time we get to Keaton’s climactic, Machiavellian speech delivered into a mirror, you’re excitedly unsure about whether you just saw a run-of-the-mill bio-pic or the logical follow-up to There Will Be Blood. “I drink your milkshake!!!” indeed.

And crap it still is, with Caruso proving grossly insufficient in the handling of hyper-edited bullets and body parts and shards of shattered glass, and screenwriter F. Scott Frazier proving he’ll never be mistaken for F. Scott Fitzgerald. In a nice change from the norm, at least the women are allowed to be far more fun than the men, with enjoyable turns delivered by Toni Collette as a grim-faced handler, Deepika Padukone as a leather-clad ass-kicker, Ruby Rose as a sarcastic Aussie sharpshooter, and especially Nina Dobrev as a loquacious tech-support geek. Was it necessary, though, for quite so many of Return of Xander Cage’s women to be so lasciviously drawn to Mr. Cage and his questionable appeal? Sure, he’s muscular. But as played – or rather “played” – by Diesel, he’s also mumbly and slow-moving and just a few months shy of 50. In one scene, a full half-dozen skinny young things in negligees escort the baritone behemoth to their shared boudoir. For Diesel’s sake, I kind of prayed they were bedding him on an orthopedic mattress.

For reviews of Split, 20th Century Women, and Jackie, visit “Crumb-ing Apart at the Seams.”