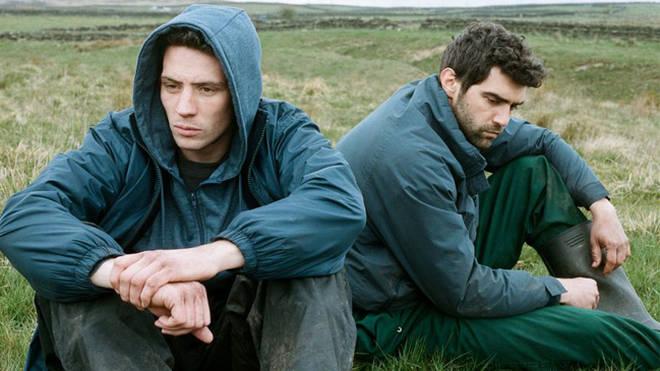 Josh O'Connor and Alec Secăreanu in “God's Own Country" at the Figge Art Museum -- June 19.

Lauded by the Austin Chronicle as "earnest, honest, accurate, and unrelenting," the award-winning British drama God's Own Country will be screened at the Figge Art Museum on June 19 as part of the Davenport venue's celebration of Gay Pride Month, this rural romance starring The Crown's Emmy winning Josh O'Connor praised by the San Francisco Chronicle as "a universal tale about giving yourself over to love, even when you seem hopelessly broken."

Winner of the World Cinema Directing Award at the 2017 Sundance Film Festival, writer/director Francis Lee's God's Own Country is set in the Yorkshire countryside, where Johnny Saxby (O'Connor) lives on the family farm with his father and grandmother. Due to his father having suffered a stroke and his grandmother's age, much of the day-to-day running of the farm falls to Johnny, and in his free time, the young man engages in binge drinking at area pubs and furtive sexual encounters with other men. But when Romanian migrant worker Gheorghe Ionescu (Alec Secăreanu) is hired as extra help for the lambing season, Johnny's world is turned upside-down. A vicious insult turns into a fight, the fight turns unexpectedly sexual, and Johnny must learn to accept both his responsibilities to his family and his burgeoning love for Ionescu, as well as question whether the two men can stay together despite their vast cultural and emotional differences.

The film had its world premiere at the 2017 Sundance Film Festival, and became the only production from the United Kingdom that year to be featured in the world drama category. God's Own Country went onto screen at the Berlin International Film Festival the following month, and shortly afterward, Picturehouse Entertainment, Orion Pictures, and Samuel Goldwyn Films acquired respective U.K. and U.S. distribution rights. Lee's dramas was released in the United Kingdom in September yet banned in Malaysia, China, and several Arab countries due to explicit sex scenes between the two protagonists. The micro-budgeted independent film, however, went on to a worldwide total of $2.6 million, and it currently holds a 98-percent approval rating on the review aggregator Rotten Tomatoes. With the site's critical consensus calling it "a quiet, moving rumination on loneliness and newfound intimacy" and "an outstanding directorial debut for Francis Lee," God's Own Country also boasts a Metacritic rating of 85 out of 100, indicating "universal acclaim."

God's Own Country will be screened in the John Deere Auditorium on June 19, admission to the 4 p.m. Film at the Figge event is free, and more information is available by calling (563)326-7804 and visiting FiggeArtMuseum.org.