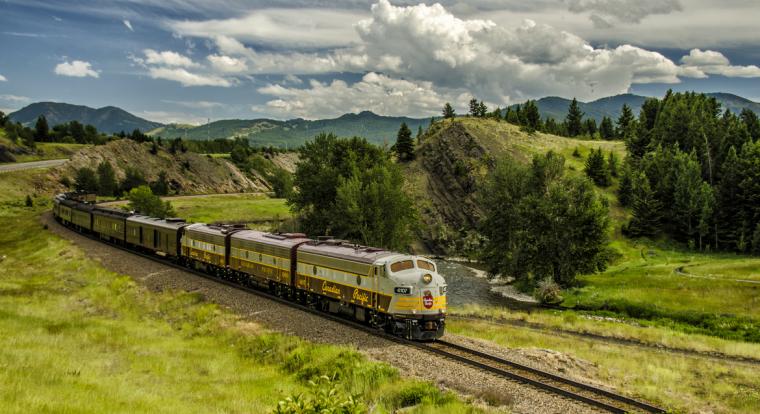 Wonders of nature and conveniences of modern locomotive travel will both be celebrated in the latest “World Aventure Series” presentations at the Putnam Museum & Science Center, with the Davenport venue hosting two March 19 screenings of Doug Jones' documentary The Great Canadian Train Ride followed by presentations with special guest Sandy Mortimer.

In this visually resplendent, 80-minute entertainment, audiences are invited to join travel expert Jones for a breathtaking transcontinental rail journey across Canada aboard the beautifully restored Canadian. Designed to be the ultimate in rail luxury, the Canadian offers all the elegance from the classic age of trains replete with original stainless steel equipment including lounge cars, domed observation cars, and sleeping cars. Its travel destinations, meanwhile, allow viewers to experience Toronto, Winnipeg, Saskatoon, Edmonton, Banff, Lake Louise, the Canadian Rockies, Vancouver, Victoria, and many other gorgeous vistas, as well as footage of the original laying of the tracks at the turn of the century, early steam trains crossing the prairies, and rare film of the original 1955 journey of the Canadian.

Born and raised in Kansas City and a graduate of the University of Missouri at Kansas City, filmmaker Doug Jones has worked as a professional entertainer, radio announcer, European tour guide, art dealer, and theatrical producer. His personal travels have taken him around the world and into nearly 70 nations on six continents, and Jones has produced 18 feature-length travel films to date, among them Great Cities of Europe, Egypt: Gift of the Nile, and The Great Alaska Cruise. Putnam speaker Sandy Mortimer, meanwhile, has traveled extensively throughout the United States and the world as a flight attendant, public speaker, and travel consultant for American Airlines. During the late 1970s, she became a news reporter and on-air personality for CBS, and went on to develop and sharpen her skills in film and video journalism, eventually broadening her interests to include travel documentaries.

The Great Canadian Train Ride will be presented at 2 and 6 p.m. on March 19, admission is $8-9, and more information on the World Adventure Series and the museum's other events and programs is available by calling (563)324-1933 or visiting Putnam.org.