Great Grief: “Manchester by the Sea” 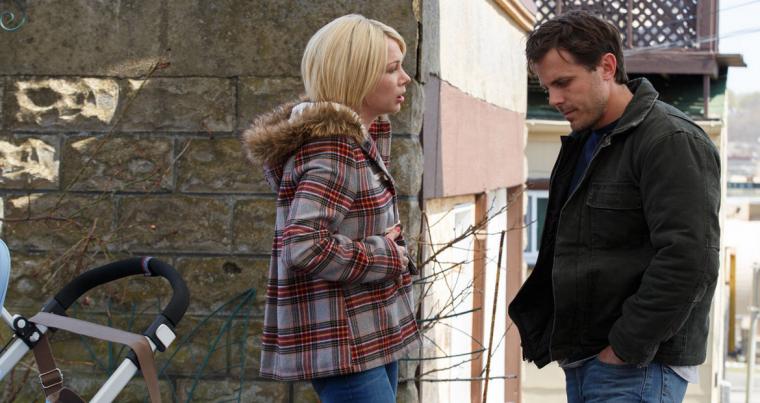 Michelle Williams and Casey Affleck in Manchester by the Sea

MANCHESTER BY THE SEA

Before its narrative gets underway, Manchester by the Sea opens with a title card presenting “A Picture by Kenneth Lonergan.” That unusual phrasing is more formal than we’re accustomed to. But it proves not to be inaccurate, as this picture is indeed a picture, and an intensely specific one, of life continuing in the wake of insurmountable tragedy. Given its reams of brilliantly crafted, oftentimes dryly hilarious conversation and its transcendent performances, you’d never mistake Lonergan’s third feature for a documentary. You’d still be hard-pressed, though, to find one scene, one moment, that doesn’t feel unerringly real. The film is as heartbreaking as actual life can be, but also as funny and startling and, above all, surprising – a profoundly human work that’s also a hell of a satisfying entertainment.

Casey Affleck plays Boston resident Lee Chandler, who, in the initial scenes, is shown toiling away as a janitor, shoveling apartment-complex walkways and offering halfhearted advice on plumbing fixtures. He’s clearly miserable and – judging by his unwarranted instigation of a barroom brawl – clearly angry, and his unsmiling countenance has no reason to change after his older brother Joe (Kyle Chandler) dies of congestive heart failure. The gist of Manchester by the Sea finds Lee having to return to his hometown to settle Joe’s affairs, among them the custody of his 16-year-old son Patrick (Lucas Hedges), with Lee shocked to learn that he’s been assigned the role of legal guardian. And if you’re a veteran moviegoer, or even a fledgling one, you can probably imagine what transpires next: Despite a rocky start to their relationship, Lee and Patrick will eventually bond over their shared displacement and grief, and Lee’s newfound purpose will lead to a hard-won happiness as he inevitably becomes a Better Man. I’m thrilled to report, however, that that’s not what happens. I mean, it happens a little, but not at all in such a proscribed, TV-movie manner.

One of the early things you notice about Manchester by the Sea is that its rhythms don’t feel quite like those of any other movie, unless you’re familiar (as you certainly should be) with Lonergan’s masterpiece Margaret. There are flashbacks that last 10 minutes and present-day scenes that last only a few seconds, and some of the most dramatically significant encounters – such as Lee telling Patrick of his father’s passing – are staged merely as voiceless background, with their meaning implied entirely through body language. Yet what’s additionally refreshing is Lonergan’s keen understanding that people, as a rule, don’t much change, even when circumstances would appear to require them to. Patrick is understandably devastated, but he’s also the same jokey, horny, self-involved smart-aleck he always was, thinking nothing of asking Lee if his girlfriend (one of two) can sleep over mere hours after his dad has died. And while Lee knows he has to step up and assume some responsibility – at least until he can find someone else to be Patrick’s guardian – he’s so enclosed in his suffocating sadness that he can barely make eye contact, let alone contend for Father of the Year. 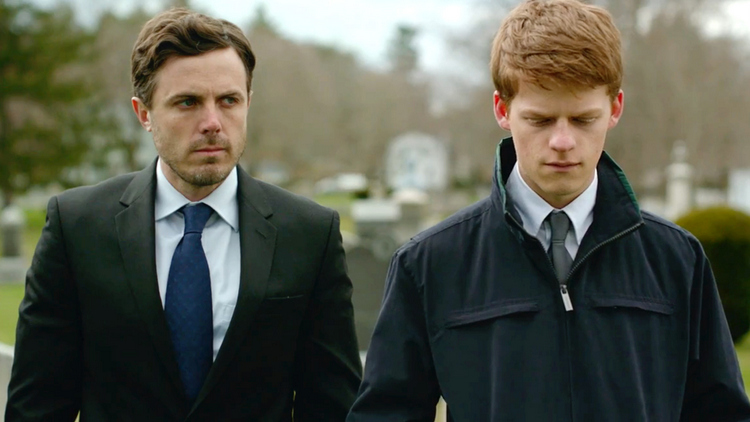 The cause of his misery, by the way, isn’t Joe, but rather a past event that Lonergan doesn’t reveal until halfway through the film, when an extended flashback explains Lee’s reticence, sullen demeanor, and apparently bottomless sorrow. It’s one of those sickening, horrific accidents that you can’t imagine anyone surviving, and in Affleck’s shattering performance – easily one of the millennium’s finest – you sense that Lee is just barely surviving it, as his every waking moment is haunted by death. What Lonergan and Affleck give us in Lee Chandler is a man who knows he hasn’t been punished nearly enough for his sins, with that bone-deep conviction permeating all of Lee’s thoughts and actions. Yet Lonergan is canny enough to know, and demonstrate, that life doesn’t stop for one person’s suffering. There are still pizzas to order and band practices to drive kids to, and bursts of totally inappropriate comedy – exemplified here by the pathetic unfolding of a hospital gurney – that hit even when we’re in no mood to laugh. Longergan embraces the tragic and the ridiculous in Manchester by the Sea, and in doing so, shows how precious little separates the two.

I don’t know how I could love this movie more. (Well, maybe if Lonergan chose not to give himself a Hitchcock cameo, which will likely only bother those of us who recognize the guy.) Beyond Affleck’s wrenching next-level turn, there are superb portrayals by Hedges, Chandler, C.J. Wilson, a never-better Gretchen Mol, and Michelle Williams, whose role as Lee’s ex-wife is brief but indelible, and features a sidewalk breakdown that I can’t even think about without welling up. Jennifer Lame’s editing is almost surgical in its precision, with cinematographer Jody Lee Lipes providing just the right blend of wintry East Coast beauty and overcast melancholy, and the musical selections offering pitch-perfect emotional accompaniment. (Never in my life have I been so delighted, and relieved, to hear Ella Fitzgerald.) But chief among the movie’s many pleasures is the assuredness of Lonergan both as director and writer, his immense talent and generosity evident in every ideally composed tableau and gracefully conceived line of dialogue. In raving about 2011’s Margaret, the follow-up to Lonergan’s 2000 breakout You Can Count on Me, I wrote, “Let’s pray it’s not another 11 years until we get a new one from him.” Blessedly, it wasn’t. Now let’s pray it’s not another five.