"Hannibal" Stays True to Trash: Also, "Left Behind: The Movie" 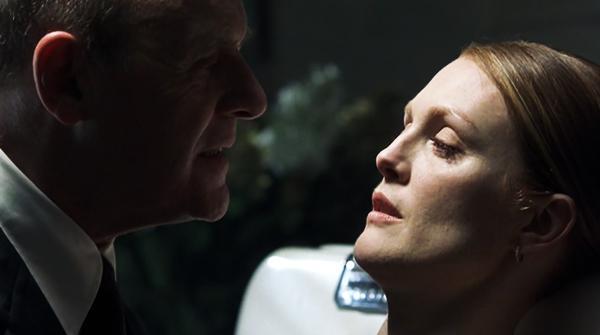 About halfway through Hannibal, the long-awaited sequel to The Silence of the Lambs, our good Dr. Lecter (Anthony Hopkins) is in mid-vivisection of his latest prey when the victim's cell phone rings. On the other end is FBI agent Clarice Starling (Julianne Moore), who has called to give the soon-to-be-deceased warning about Lecter's grislier instincts. And then, with a thrilling, inevitable perfection, Hannibal picks up the phone and says with his patented, seductive purr, "Hello, Clarice." It ranks with one of the all-time-great moments in sequel history - the first reunion of these indelible characters in 10 years - and it produced an audibly electric sensation in the audience, where everyone simultaneously released a deep-throated chortle mixed with a shudder. It might be worth sitting through the film, at least in a packed movie house, just to get to that moment. But be warned: It'll probably be the only time during the movie when you'll have that feeling.

Hannibal is, of course, based on Thomas Harris's bestseller from 1999, and the movie's biggest failing is that is stays relatively true to the author's work, which was terrible. Purists love to complain that screen adaptations of books are never as good as their source material, but what are filmmakers to do when the source material itself is mostly garbage? (Maybe, instead of Hannibal screenwriters David Mamet and Steven Zaillian, they should have hired Mary Harron and Guinevere Turner, who drafted a fine script from the bestselling pap of American Psycho.) The novel was filled with one ludicrous touch after another (my "favorite" was the chilled martinis made with the tears of children that the evil Mason Verger loved to sip), it shoved Clarice Starling to the sidelines, and it featured the most jaw-droppingly wrong ending imaginable, one that literally made me throw the hardcover book across the room. Hannibal director Ridley Scott and his screenwriters have done us an enormous service by ignoring most of Harris' ridiculous throwaways (including the novel's lesbian bodybuilder, a hateful, homophobic caricature) and changing the ending significantly, but sadly enough, they're left with a whole new batch of problems.

In the book, and now the film, Hannibal Lecter is living well in Florence, Italy, where he's trying to reconstruct a life of civility and culture under the alias Dr. Fell. But he has just been placed back on the FBI's 10-most-wanted list, and an aging cop named Renaldo Pazzi (Giancarlo Giannini) thinks he's spotted him and, instead of turning him over to fellow authorities, attempts to garner the reward for his capture. Fair enough, but the novel explains that Lecter has had plastic surgery and now sports a brand-new face; in the movie, he still looks like Anthony Hopkins. Naturally, that begs the question: How, in the past 10 years, has no one else spotted him? And numerous other incredulities pop up. How does this man get through airports? How is he able to sneak in and out of people's houses whenever the plot demands it? And could he really steal supplies from a big-city hospital just because he's wearing somebody's lab coat? (It's like a leftover plot hole from The Fugitive.)

The movie retains a lot of other dopey elements from the novel, too, like the FBI superior (Ray Liotta, in a piggy, obvious role, and giving a performance to match) who threatens Starling's career if she won't sleep with him, and the infamous dinner-party scene that, as filmed here, just looks like a gruesome and rather unconvincing blue-screen effect. With Ridley Scott in charge, you know everything will look stylish and nearly every scene will have little wisps of smoke filtering through, but he can't give the endless series of coincidences and contrivances any conviction; Hannibal has been filmed handsomely, but there's something pretty silly about taking this tawdry, repellant little work and inflating it into something grandiose.

What makes the film more engaging than the novel is the relish with which a few actors go at their roles. Hopkins isn't nearly as sinuous or terrifying this time around, but he's most obviously having a ball in the role, and even though Hannibal Lecter became a pop-culture cliché years ago, he still comes through with dizzyingly original line readings throughout. Gary Oldman, as the disfigured, malevolent Mason Verger, may be predictably cast as the weirdo cum laude, but he delivers his lines with nasty relish. And Giannini is wonderful as the troubled Pazzi; for long stretches he takes over as the star of the film, the absolute embodiment of the world-weary cop. Yet Julianne Moore, for all her talent and technique, is too remote as Clarice, and though it's no fault of hers, the ending scenes between her and Lecter don't accumulate any force because, quite frankly, it's not Jodie Foster in the role. When Moore and Hopkins face off at the finale, you see two fine actors doing some fine acting, but you don't feel the frission that you might have, and that loss can't be overcome. Whatever Foster's reasons were for avoiding Hannibal, her instincts were right on the money; though often well-crafted and performed, Hannibal is a major disappointment, but not, if you read and disliked the book, a surprising one. LEFT BEHIND: THE MOVIE

There's something almost charming about the sheer clunkiness of Left Behind: The Movie; it appears to have been made with earnestness, dedication, and not one iota of talent. Based on the first in a series of fundamentalist Christian novels, it's a modern-day enactment of the Book of Revelation, in which the world's faithful suddenly disappear without warning, a global economy begins to develop, an antichrist with a heavy accent assumes world power, et cetera. You'd think a few smart, or at least well-read, people would start to pick up on the signs, but Kirk Cameron is our hero here, so enlightenment takes quite a bit longer than it should.

I won't spend too much time detailing the idiocies of Left Behind, because it's such a wan and helplessly crummy piece of work that it inspires more pity than anger; picking on it is just too easy. But it is worth pointing out that the movie, while currently playing at a theatre near you, is also available at most video outlets, and $2.5 million worth of suckers bought tickets for it in the film's opening weekend alone. Considering that the movie looks as if it was shot in someone's backyard, and its most impressive visual effect is the stubble that appears on Kirk Cameron's chin, I can't see any reason for a concurrent theatre and home-video release, unless it's to soak up more cash from the faithful while being rather duplicitous in the process. Couldn't this be one of the signs of Armageddon?