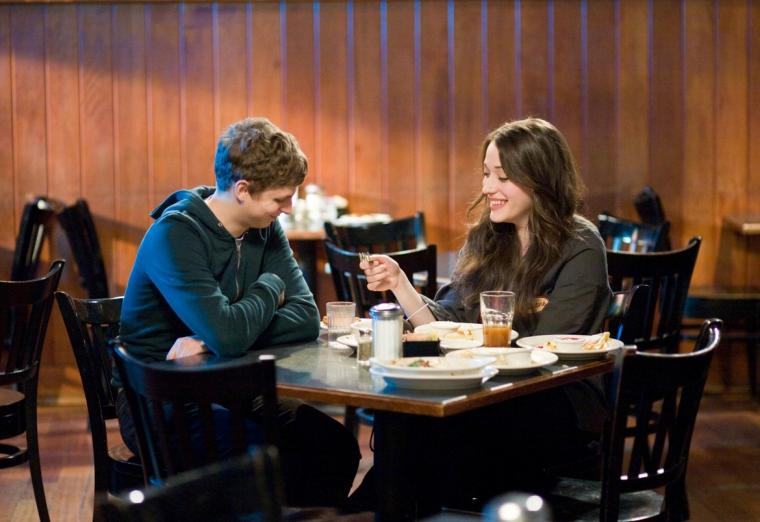 Hollywood, in its infinite wisdom, chose to open a whopping seven wide releases this past Friday, and since the market apparently wasn't glutted enough, also expanded distribution of the Ed Harris western Appaloosa from 14 theatres to 1,045. As business strategies go, this one was a bit of a head-scratcher, but it was refreshing to see a weekend when there truly was something new for everyone - the only people screwed in the deal, it seems, were movie critics without access to press previews.

Yet if you can't handle the occasional triple- and quadruple-feature, you should get out of the reviewing business. (If you can, though, you should consider getting a life.) The following are thoughts on seven of the weekend's eight openings, with apologies to How to Lose Friends & Alienate People, as a quintuple-feature was out of the question. 12:20ish: There's a bad splice at the start of Nick & Norah's Infinite Playlist, so the characters' feet appear at the top of the screen while their heads are at the bottom. The goof is soon fixed, but adding the indie-rock soundtrack, the knowingly ironic dialogue, and the frisky opening credits that look not-so-coincidentally like Juno's, this isn't a great omen. My fears are soon quelled. A romantic-comedy update of Scorsese's After Hours for Generation-YouTube, in which there's always a party and a convenient parking place, the movie is witty, big-hearted, and joyously inclusive, and its only problem - and it's barely a problem - is that Michael Cera isn't really believable as the (heterosexual) guitarist for a gay punk band, nor as someone who can give anyone an orgasm. (The captivating Kat Dennings, however, does a first-rate job of faking it.) For the moment, he might be uncastable as anything other than adorable, hilarious Michael Cera. For the moment, that's enough. 3:00ish: I'm not a big Bill Maher fan, but I'm curious to see Religulous, in which the comedian travels the globe and grills people about their beliefs. By the screening's end, I'm no longer not a fan. I actively detest him; not because he's an unapologetically contemptuous agnostic, but because he's almost soul-crushingly unfunny. Directed by Borat's Larry Charles, the film might've been Borat-esque subversive if Maher occasionally shut the hell up, but he's so busy interrupting his interviewees and countering factually unsupported beliefs with unsubstantiated "truths" of his own that he and the movie quickly become unwatchable. (And Borat didn't cackle at his own jokes.) I find myself staring at my shoes to avoid looking at Maher's hapless victims, or at Maher himself, so self-righteous that he seems far less trustworthy than the subjects he mocks ... which, I recognize, is the same rationale many use for loathing Michael Moore. But I find Moore humanistic and entertaining. I find Maher snide and repellant. I can live with that. 5:00ish: I am currently surrounded by Michael Moore haters! The lead character in An American Carol - which is like Airplane! for right-wing conservatives, and directed by Airplane!'s David Zucker - is liberal-wuss documentarian Michael Malone (haw haw!), who eventually learns the errors of his military-trashing, God-and-country-bashing ways. Yet the strangest thing happens in the movie's first five minutes: I laugh. Out loud. (The suicide-bomber training film is really funny.) It's the last time I do laugh, partly because corpulent Malone portrayer Kevin P. Farley is so uncannily reminiscent of his deceased brother, Chris, that there's absolutely no fun in watching him incessantly gorging on junk food. But while the movie is cheap, lazy, horribly filmed, and offensive in all the expected ways, there are a few smart gags and amusing cameos, and it certainly plays well to its base; Religulous received a mild ovation at its end, but I witness two viewers giving this one a standing ovation. I'm chilled to the bone.

6:30ish: I leave the cineplex to catch a play, and after the last three-and-a-half hours, am delighted to spend some time away from all discussion of politics and religion. And then I remember I'm attending Inherit the Wind. Noonish: Less than 50 people are joining me for the talking-mutt spectacular Beverly Hills Chihuahua. Has word-of-mouth spread so quickly? Despite some cool dog stunts and enjoyably tacky costumes - the kicky bowler hat on the effeminate bulldog was a nice touch - this outing is weak even for the depressingly low standards of (non-Pixar) cinematic kiddie fare, with crummy voice-over work, crummier CGI, and a discomforting degree of Mexican stereotyping. (The film is exactly what many of us dreaded - an 85-minute Taco Bell commercial in Prada.) My favorite moment comes when our canine heroine appears to be dead, and her faithful companion grieves, "She's ... gone," and a little kid sitting behind me does a Macaulay Culkin by blurting out, "Yes!!!" I'm assuming he was aching for the movie to end, too. 1:30ish: Chihuahua's seven-minute plug for the forthcoming animated feature Bolt makes me five minutes late for Flash of Genius, an inspirational bio-pic about the inventor of the intermittent windshield-wiper. (Oh, that old plot ... .) With its pleasantly earnest performances befitting its pleasantly earnest presentation, the film ambles along fine until Greg Kinnear's friendly-nebbish inventor notices the wipers he's invented in use on a passing car, which he trails to the Ford company, which is hosting a gala celebration promoting the company's brand-new wipers ... that they stole from him! (This comes as a considerable shock to the supposedly brilliant college professor, who you'd think would've read about Ford's triumph in the newspaper.) From then on, everything that occurs feels simplistic and contrived in the way of every dull, maudlin, obvious bio-pic you've ever seen. It's the perfect movie for people who hate being surprised by movies - nothing in it happens the way you don't expect. 4:10ish: I'm among a handful viewing Fernando Meirelles' doomsday parable Blindness, which is being protested as degrading by organizations for the sight-impaired. I wind up thinking it probably should be protested, mostly because it's so abjectly stupid. Based, perhaps too faithfully, on José Saramago's acclaimed novel, the film is an ugly, draining literary exercise, all metaphor and symbolism, and you feel like the Great Unwashed for asking logical questions such as "Why don't the virally infected introduce themselves by name, rather than occupation?" and "Why does Danny Glover deliver exposition like he's reading it from Saramago's text?" and "Why doesn't Julianne Moore just tell everyone she can see, for chrissakes?" The movie is a mostly monotonous (if intriguingly shot) drag, yet Moore, at least, escapes with dignity intact, as she's one of the few who doesn't look like she's suffering through a long, ungainly improv class. ("Okay, you're blind, naked, and disoriented ... go!") 6:40ish: My duties end with an inspiringly well-populated screening of Appaloosa, and I almost wish the movie wasn't as funny as it is, because with a half-dozen or so viewers suffering from a hideous, hacking cough, I'm missing a lot of the dialogue. (The laughs led to louder coughing fits.) But the film is funny - also exciting and touching and spectacularly effective. Taciturn lawmen Ed Harris (who also directs) and Viggo Mortensen, both masterfully subtle, contend with a murderous Jeremy Irons and a deceptively charming Renée Zellweger in New Mexico circa 1882, and I'm not sure I ever stopped smiling at it; the movie is a deliberately old-fashioned and satisfying entertainment for those who occasionally sigh, "They don't make 'em like they used to." I have an absolute blast, and realize, on the drive home, that it's the only weekend release at which I didn't yawn. Not even once.

8:55ish: I return from the cineplex, open a book, and begin reading. It feels good.