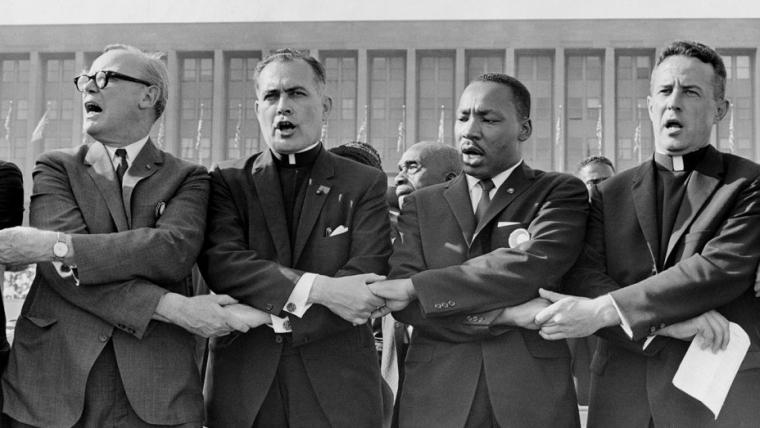 Taking place as part of St. Ambrose University's celebration of Dr. Martin Luther King Jr., the acclaimed documentary Hesburgh will enjoy two screenings in the Galvin Fine Arts Center on January 18 and 19, the film detailing more than 50 years in the life of Father Ted Hesburgh (1915-2015), America's most well-known Catholic priest and a prominent figure in America's Civil Rights movement.

A native of Syracuse New York, Hesburgh became an ordained priest of the Congregation of the Holy Cross and is widely remembered for his service as president of the University of Notre Dame from 1952 to 1987. In addition to his career as an educator and author, Hesburgh was a public servant and social activist involved in numerous American civic and governmental initiatives, commissions, and international humanitarian projects. He received numerous honors and awards for his service, most notably the Presidential Medal of Freedom (in 1964) and Congressional Gold Medal (2000), and as of 2013, he held the world's record for the individual with most honorary degrees, which totaled more than 150.

Hesburgh is credited with bringing Notre Dame, long known for its football program, to the forefront of American Catholic universities and its transition to a nationally respected institution of higher education. He supervised the university's dramatic growth, as well as the successful transfer of its ownership from Holy Cross priests to the Notre Dame Board of Trustees in 1967, and during his tenure as president, the university also became a co-educational institution. In addition to his service to Notre Dame, Hesburgh held leadership positions in numerous groups involved in civil rights, peaceful uses of atomic energy, immigration reform, and Third World development. Hesburgh was also active on the boards of numerous businesses, nonprofits, civic organizations, and Vatican missions.

A 2018 release by award-winning director Patrick Creadon, Hesburgh offers a unique glimpse at more than 50 years of American history as seen through the eyes of Fr. Hesburgh. As an educator, civil-rights champion, adviser to presidents, theologian, and activist, Hesburgh was called on my numerous world leaders to tackle the most challenging issues of the day, and built a reputation as a savvy political operator with a penchant for bridging the divide between bitter energies. The Best Documentary winner at the Cleveland International Film Festival and a dual winner at the Heartland International Film Festival, Hesburgh was called “an informational as it is inspirational” by the Los Angeles Times, with the Washington Post stating deeming it a “lively and inspiring portrait of one of the most influential Americans of the 20th century.”

Hesburgh will be screened in St. Ambrose's Galvin Fine Art Center at 3 p.m. on January 17 and 18, and information on the event, and all events in the university's Martin Luther King celebration, is available by calling (563)333-6251 or visiting SAU.edu.