Hit or Miscreant: “Thunder Force” and “In the Earth” 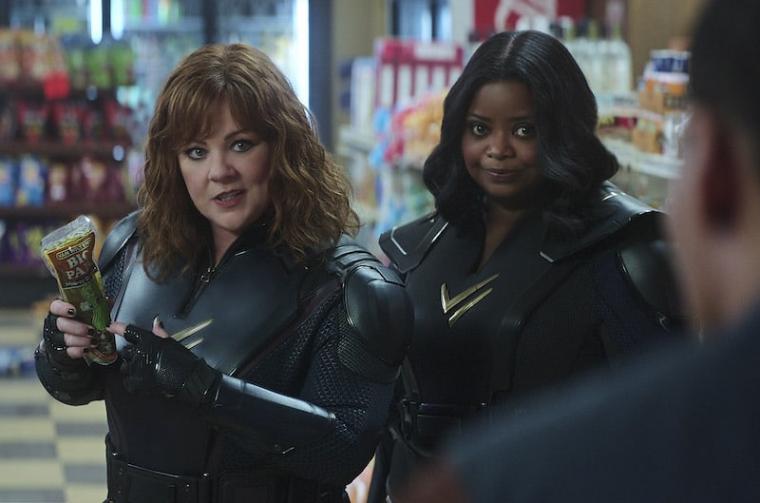 If a comedy isn't at all satisfying, yet somehow also isn't the least bit disappointing, then what the hell is it? I'm not sure, but it probably stars Melissa McCarthy, most likely as directed by her real-life husband Ben Falcone. These two have made so many lame movies together since 2014 – Tammy, The Boss, Life of the Party – that it wasn't until this past weekend that I learned another one, Superintelligence, had actually dropped on HBO Max in the fall. (To be fair, I have no idea if that film is lame or not; I'll probably give it a watch one of these years.) Amazingly, a fifth, titled Thunder Force, landed on Netflix just over a week ago. How do McCarthy and Falcone maintain the energy to keep churning these things out? And why can't I ever seem to hate these obvious, awkward, badly scripted, lazily directed outings with the fervor they deserve?

The chief answer, of course, is McCarthy, who, barring an occasional train wreck in the vein of Identity Thief, seems nearly impervious to weak material. But while she and Falcone have yet to craft a star vehicle that could be described as “inventive” or “ingenious” or, you know, “good,” they at least understand that modern farces are like bags of microwave popcorn: If enough bits have a tasty crunch, you don't much mind the duds. Every once in the while, comedies that are legitimately great from beginning to end – my list of late would include Palm Springs, Game Night, and Borat Subsequent Moviefilm – still manage to get released. In an entertainment world ever-more dominated by familiar intellectual property, though, McCarthy's and Falcone's continued mission to provide cheer through inarguably silly business, ridiculous non sequiturs, and gifted actors willing to look foolish isn't just brave, but kind of admirable. By all means, enjoy the big trademarked ape laying into the big trademarked lizard, or all nine-and-a-half hours of the reconstructed Justice League. Crummy movie or not, I'd rather spend my time watching Thunder Force's Jason Bateman attempt to hold a wine glass with enormous crab claws, or McCarthy imitate Jodie Foster in Nell a quarter-century past that gag's expiration date.

Given that their latest finds a pair of novice superheroes attempting to rid Chicago of a team of nefarious supervillains called Miscreants, you might think director Falcone (who also wrote the script) and McCarthy were initiating a send-up of Hollywood's whole intellectual-property stasis. They're really not, though. It's just dumb jokes, as usual. After some nominal backstory establishes 1983 as the year that outer-space gamma rays (or whatever) gave miraculous abilities to all of our planet's sociopaths, Thunder Force picks up in the present day, where one-time childhood friends Lydia and Emily – the former a blue-collar boor, the latter a shy brainiac – reunite. Hoping to avenge her parents' 1983 deaths at the hands of an über-baddie, Octavia Spencer's Emily has invented serums that will grant non-psychotic Earthlings powers of their own. Yet before the scientist is able to turn herself into a superheroine, McCarthy's Lydia, Nosey Nellie that she is, accidentally gets several needles' worth of a super-strength vaccine, leaving the aghast Emily stuck only with the one for invisibility. A pair of tacky, increasingly smelly leather suits later, and Lydia and Emily are no longer mildly hostile pals. They're Thunder Force! 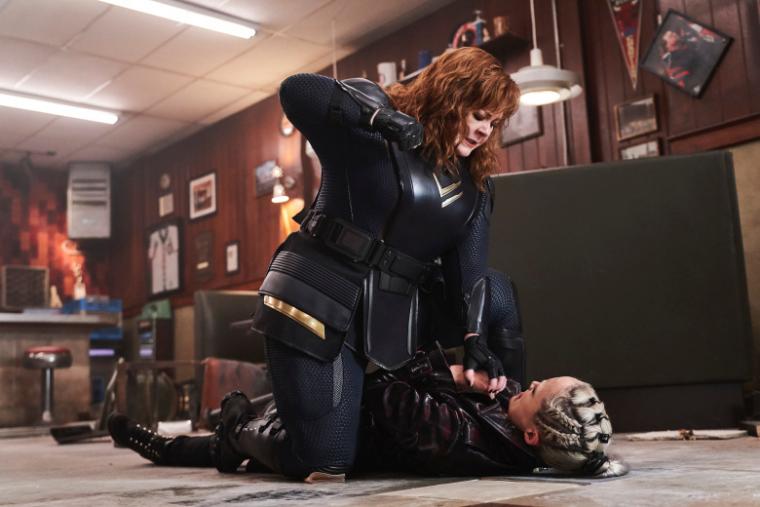 What happens next couldn't possibly matter less. The women train for active hero duty with varying degrees of success (and, on McCarthy's part, lots of predictable slapstick). Bobby Cannavale plays a megalomaniacal mayoral candidate with plans to assassinate everyone who didn't vote for him. A henchwoman unimaginatively named Laser (Pom Klementieff) does the fiend's bidding through glowing balls of destructive energy. Emily's teenage daughter (Taylor Mosby) frets for her mom's safety. Melissa Leo – excuse me, Academy Award winner Melissa Leo – plays the least surprising turncoat in superhero history. The Cubs and the Bears and the Bulls are all dutifully name-checked. Glenn Frey, for some reason, peppers the soundtrack. And Bateman shows up as a snarky smoothie with, yes, crustacean claws, the actor's always-welcome presence also accidentally reminding us of the nightmare that was Identity Thief. The whole thing is stupid. It's desperately formulaic. It's never remotely clear whether the film was designed for family audiences, as the remedial plotting and juvenile puns would suggest, or irony- and nostalgia-minded adults. (Seriously: Nell?!) And I'd be lying if I said I didn't giggle out loud on at least two dozen occasions.

It's entirely possible, of course, that we're simply conditioned to expect less from comedies that debut on our TVs and phones – movies we can safely watch in between bill paying and house cleaning without also fearing that we're missing anything. Ironically, though, you actually will miss things if you tune in and out of Thunder Force, because what makes the film modestly worthwhile (or at least harmless) is its frequent supply of charming, goofy, throwaway gags of the sort that similarly enlivened Tammy and The Boss and Life of the Party. She's only in the film for about 60 seconds, but I wouldn't have wanted to miss Sarah Baker, as Emily's politely firm receptionist, telling Lydia there was no earthly way she'd be allowed into the scientist's lab … only to be told by her employer that, yep, she was indeed allowed. (“Not how I thought that one was gonna go!”) I'm glad my attention didn't wander when Lydia made fun of Laser's achingly slow walk down some steps, and when Brendan Jennings failed miserably at a simple knock-knock joke, and every time Cannavale bristled at being called “King” instead of “The King.” ("That's a dog's name!") And I was super-happy not to have been denied the sight of Bateman crab-scooting sideways out of danger, to say nothing of the moment in which the guy admitted to Lydia that, as a Miscreant, he was really only “half-'Creant,” and she mistook the description for “half-Korean.” Later, Emily makes the same mistake, and it's actually funnier the second time around.

Between the cornball routines and wan sentimentality and cheesy effects and Falcone's bizarre habit of almost never positioning his camera where it needs to be, there's every reason to want to give up on Thunder Force, and despite giving a completely decent and committed performance, Spencer doesn't develop much of a rapport with McCarthy. (In real life, the women are apparently good friends, but here, they don't appear to have even met prior to filming.) Yet the movie's star, as ever, emerges unscathed, and even though she's played variants on this role what feels like dozens of times before, McCarthy and her game cast deliver just enough good-natured fun that you can enjoy Falcone's most recent offering nearly all the time without ever genuinely liking it. The ability to produce that kind of irrational response has gotta be its own kind of superpower. 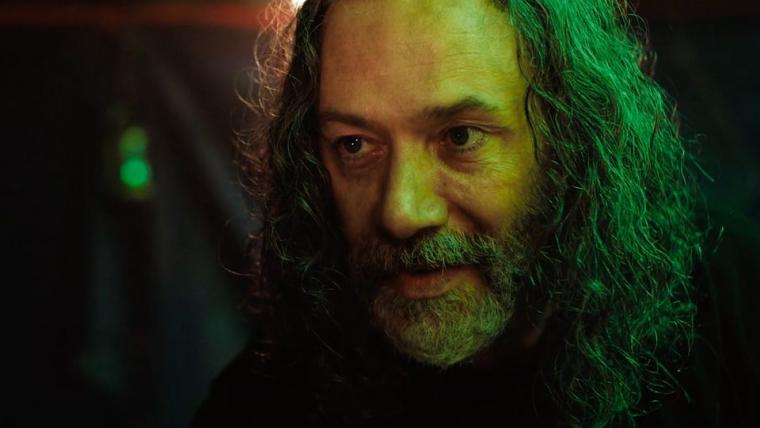 Written and directed by Ben Wheatley, and filmed over the course of 15 days last August, the torture-porn-cum-eco-thriller In the Earth is one of only a handful of cineplex releases over the last year that I've actively hated. It starts well, and with maximum familiarity, as scientist Martin Lowery (Joel Fry) enters a research facility filled with mask-wearing professionals and explains that he's out of practice dealing with other people, having spent the last four months indoors, alone, as a result of a global pandemic. (Join the club, Martin.) Before long, he and a park ranger (Ellora Torchia) are scouring the English woods for unspecified equipment and supplies, as well as running afoul of a mysterious hermit (Reece Shearsmith) who looks like David Strathairn as co-opted by ZZ Top. And for the rest of Wheatley's interminable experimental freakout, nothing about this gruesome assault on our equilibrium ever bothers to cohere. At one point, a fourth character played by Hayley Squires tells our leads “Don't try to make sense of this,” but the advice lands about an hour too late.

So no, I can't tell you what, precisely, In the Earth is about, although there is some metaphysical hooey about the forest being a living entity that lures unsuspecting visitors to their deaths. But I can tell you what I saw and heard. Martin, screaming loudly, having his foot cut open in gory closeup. Martin, screaming even louder, having several toes hacked off. Martin, screaming even louder, suffering through the subsequent cauterization. (Foot fetishists may have to take to their fainting couches.) Savage beatings. Druggings. A medical tool sticking out of an eye socket. Hackneyed horror imagery out of The Blair Witch Project. A number of eardrum-busting, nausea-inducing sound-and-light shows that are never explained and absolutely immaterial to the narrative. (A pre-film title card warns epileptics about the strobe effects to follow, but doesn't warn sentient beings of the nonsense to follow.) And quite possibly the least satisfying wrap-up to a horror flick in modern history, with only the stalwart performers and composer Clint Mansell's synth-heavy, John-Carpenter-on-Lithium score making the experience even borderline-bearable. Most confoundingly of all, the pandemic-y preamble actually has no bearing on anything that happens in In the Earth, which could just as easily have unfurled without the gimmicky addition of a real-world health crisis. Then again, if any cinematic work ever felt like the laboriously unpleasant result of cabin fever, Wheatley's would be the one.