He Wants to Hold Her Hand: "Yesterday" and "Annabelle Comes Home" 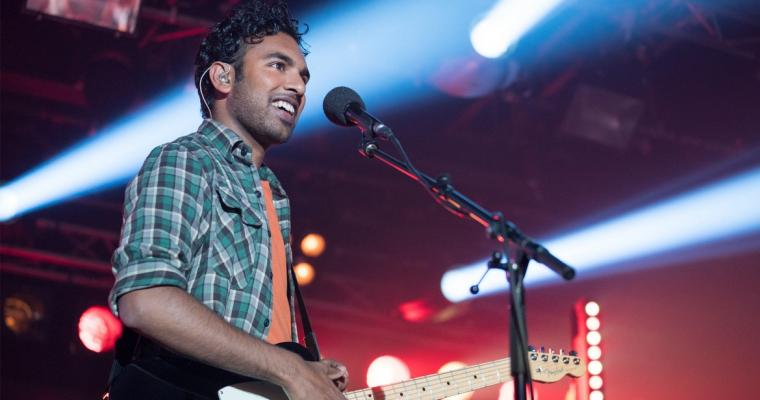 I should probably be knocking wood as I type this. But if my heart ever suddenly stops while you're in the vicinity, don't call for a defibrillator – call for Danny Boyle instead. Boyle, of course, is the Oscar-winning director of Slumdog Millionaire whose other credits include Trainspotting and its 2017 sequel, 28 Days Later …, Steve Jobs, and 127 Hours, the James Franco drama in which Boyle brought excitement and visual flair to the tale of a man with his arm stuck between two rocks for 90 minutes. He's back now with Yesterday, the latest über-adorbs rom-com by screenwriter Richard Curtis (Four Weddings & a Funeral, Notting Hill, Love Actually), and I swear, if Boyle can give life to this inventive yet treacly piece of sentimental uplift – and he absolutely does – he could no doubt bring me back to life, too.

It feels churlish to criticize Yesterday for not being more than it is, partly because it's the rare wide release this summer that isn't a sequel and/or reboot, and partly because it does boast an atypically ingenious premise by Curtis – the sort of conceit that might have led to utter magic had it been written by Charlie Kaufman. After one unfulfilling gig too many, the modestly talented, hopelessly under-the-radar busker Jack Malik (Himesh Patel) considers retirement from singing/songwriting, much to the chagrin of his manager, driver, and one-woman cheering squad Ellie Appleton (Lily James). While biking home, however, the Earth experiences a global power outage during which Jack is hit by a bus, waking with two fewer teeth and the realization that no one except him has any memory or knowledge of the Beatles and their considerable catalog. (A Google search of “Beatles” leads to photos of insects, and even the band albums in Jack's collection no longer exist.) After what feels like mere seconds of shock, Jack accepts this as the chance of a lifetime, and begins performing solo renditions of John, Paul, George, and Ringo classics, taking full credit for their genius. Ellie is astonished. Professional musicians – including, in a substantial role as himself, Ed Sheeran – are agog. The public is ravenous for more. And as his fame escalates, Jack, being a fundamentally decent, Richard Curtis-y sort, begins actively panicking about when, if ever, the other shoe is going to drop, and just what Ellie will think of his ruse when and if it does.

It's that last bit, in Yesterday's telling, that drove me a little crazy. Everyone I know who saw the trailer was jazzed for the film; one of Jack's friends comparing the title song, unfavorably, to Coldplay's “Fix You” and Sheeran suggesting a title switch to “Hey, Dude” seemed to promise an entertainment rife with knowing, witty laughs. And laughs are certainly present, if in smaller quotients than we may have hoped. (The biggest chuckles come from the revelations of what other iconic names and products have vanished along with the Beatles.) Yet far too much of the movie is devoted, in now-irritating Curtis fashion, to its central near-romance. And the question of whether Jack and Ellie will finally hook up after 15 years of platonic friendship is so less interesting than the Beatles angle that it didn't at all surprise me when one of Ellie's maudlin “I've loved you forever and you never noticed!” speeches was augmented by the guy sitting behind me who muttered, “Oh, for chrissakes … .” James is as radiant and beguiling as always, and newcomer Patel is an able singer and a sweet comic presence, even if Jack does spend so much time in pop-eyed shock that you tend to forget the man has eyelids. But I'd argue that audiences, myself included, have perhaps run out of patience with movies in which two obviously made-for-each-other characters fail to admit their love after 15 years of mutual affection. Charming though it occasionally still is, Curtis' idea of romance is mired in stereotypes and clichés that simply don't work on-screen the way they used to, and when Ellie tearfully confronts Jack with the question of why he never once asked her out, it'll likely take considerable willpower on every viewer's part to not shout back, “Why didn't you ask him out?” For chrissakes! 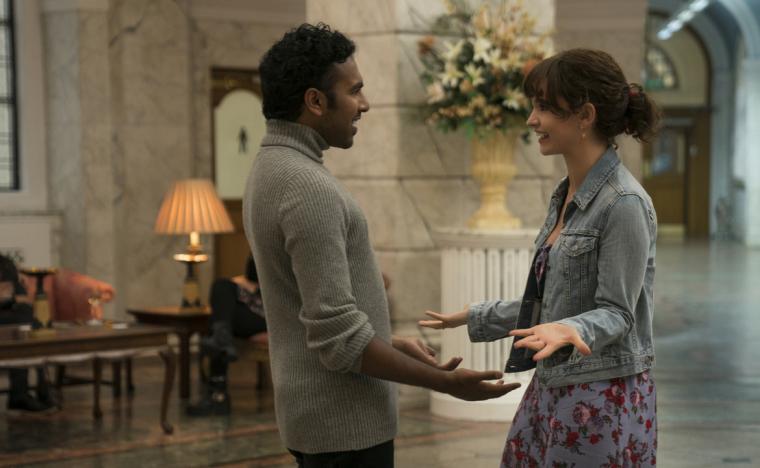 Somewhat incredibly, Curtis appears on far firmer ground when he's out of his traditional rom-com comfort zone. To be sure, Yesterday is rife with the sorts of stock sitcom elements that Curtis would likely be lost without. If one of our romantic leads is about to make a life-altering declaration to the other, you can safely bet that a ringing cell phone or knock on the door will interrupt the moment of soul-baring. Yet despite 15 minutes of shaky set-up (plus some distracting looping of Patel's dialogue), the screenwriter eventually scores big with scenes of Jack fervently trying to recall the Beatles' trickier lyrics, and his parents' absent-minded attention to the debut of “Let It Be,” and Curtis' initial, brilliant implication that people hearing the Beatles today would be completely indifferent to their songs were a taste-maker á la Ed Sheeran not around to legitimize them. (Charlie Kaufman would have taken that premise and ran with it.)

But Boyle, bless him, lends forward momentum and wizardly filmmaking panache to even the script's drearier elements, and the director and his editor Jon Harris provide consistently crackerjack timing. As Richard Curtis-y as this outing is, there's hardly a frame in which it isn't also instantly recognizable as a Danny Boyle picture … and that's even before the eternally great Kate McKinnon shows up as a venal record producer, spouting tough love without a trace of sensitivity (“You're very unattractive – skinny yet somehow round”) and determinedly shaking this oh-so-polite British comedy out of its self-deprecating doldrums. The affable, mildly endearing, overall-underwhelming Yesterday needed Danny Boyle like nobody's business. It may, however, have needed Kate McKinnon just as much. Halfway through the film, there's a reference to an alternate-reality sketch-comedy series – one that everyone but Jack apparently recognizes – called Thursday Night Live. If a world without the Beatles is nightmarish to consider, I'm thinking one without McKinnon would be equally upsetting. 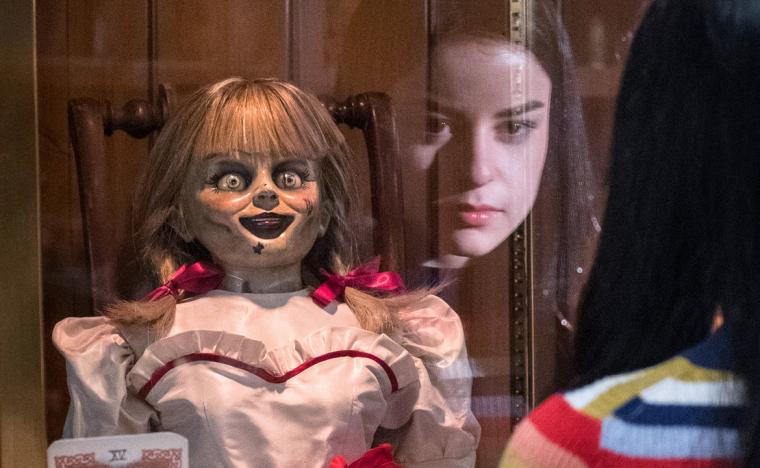 As this movie season of incessant, thunderously unnecessary sequels and reboots lopes unmercifully on, we're now confronted with director Gary Dauberman's Annabelle Comes Home, the third film in the Annabelle series and the seventh is the “Conjuring Universe” that includes, thus far, two Conjurings, The Nun, and The Curse of La Llorona, the latter from earlier this year. Beyond the obvious question of “Why?!?”, which is easily answered with the one-word retort “Money,” I do have another query: When did R-rated horror thrillers get so irredeemably wimpy? As Jordan Peele's Us and Ari Aster's 2018 debut Hereditary attest, there are still some exceptional, unnerving ones being made. But somehow, this latest tale of the braided porcelain doll whose existence wreaks supernatural havoc has also been granted an R-rating despite minimal bloodshed, only one dropping of the “F” bomb (as in every PG-13 release this millennium), and a cast of six – plus one comic-relief pizza-delivery guy – who all survive to the end credits. I know, I know: I should have prefaced that last bit of information with “SPOILER ALERT!” Address all complaints to NoOneCouldPossiblyCare@makethissummerend.com.

The hell of it is that the movie itself isn't bad if you can ignore that it isn't in any way scary or disturbing or memorable – which, admittedly, might be a deal-breaker given this particular capitalized Universe. After our series' parapsychologist exorcists played by Vera Farmiga and Patrick Wilson make their contractually obligated appearances at the start, we shift to the evil-spirit adventures of Lorraine and Ed Warren's tween daughter Judy (McKenna Grace), her babysitter Mary Ellen (Madison Iseman), and Mary Ellen's cajoling best pal Daniela (Katie Sarife). Despite their day-to-night dealings taking place, under Dauberman's lethargic direction, in what feels unfortunately like real time, all three performers give admirably focused and empathetic horror-movie portrayals. And the director occasionally rouses himself from the torpor with transfixing set pieces: Badfinger's 1971 classic “Day After Day” getting a slow, creepy musical descent into the unsettling; an understandably freaked-out Daniela watching her mirrored image on an ancient TV undergo traumas she herself hasn't (yet). It's all perfectly fitting with the Conjuring franchise's recent turn toward creep-out corniness – its lame jump scares and juvenile jokes – and the presumably delicate sensibilities of young fans who, equally presumably, don't want to see their heroes killed but also don't want to see a horror flick that's baby-rated PG-13. So what we wind up with in Annabelle Comes Home is a whole lot of well-acted nothing – a fright-film installment whose only conceivable interest comes from its being an installment. At the very end (sorry … SPOILER ALERT!), Patrick Wilson, guitar in hand, graciously returns to the premises and asks the spooked-but-resilient gathered “Does anyone want to hear a song?” After 100 minutes of interminable, franchise-flick banality, it took all my restraint to not yell, “Yes, please!”, as the Broadway veteran's wonderful crooning would at least have been a relief from the abject non-scariness of what preceded it. Then the credits rolled, and we barely got to hear Wilson sing. Damn you, Hollywood summer.