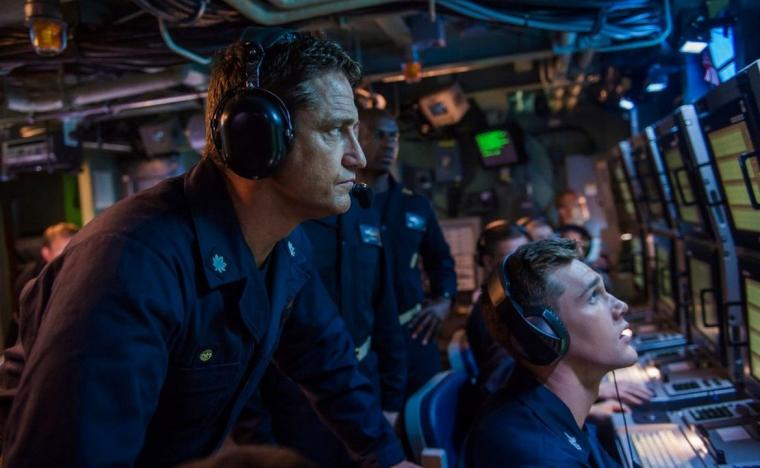 In the action thriller Hunter Killer, Gerard Butler plays Sam Glass, a stern, reckless, my-way-or-the-highway submarine captain who's initially seen, on dry land, in the process of picking off a deer with a long-range rifle. Nothing about the image surprised me – the grim-faced, half-bearded Butler looks the way he always does in his movies, and of course the guy is packing heat. (Bambi fans, though, can rest easy: After Glass spies the deer's mate and baby trotting behind him, the ol' softie refuses to pull the trigger.) Yet I'll admit I was more than a little jazzed by the introduction's Scottish locale. Would director Donovan Marsh's outing have the nerve to cast Scotland native Butler as an actual Scot, and spare us the pain of listening to one of the star's continually unbearable attempts at an American accent?

Sadly, no: While Butler's brashly bland readings most definitely aren't, Glass himself is a red-blooded 'Murican through and through, making the Scotland prelude both meaningless and infuriating. But his first scene with dialogue does bring with it a considerable shock in that Butler, for the first time in living memory, appears on-screen completely clean-shaven. (Who taught the man how to use a razor and where can thank-you notes be sent?) And the whole of Hunter Killer is another kind of shock, because as stupid action thrillers starring Gerard Butler go, it's actually pretty decent.

The decency doesn't necessarily extend to the wildly convoluted plot, which finds the Russian defense minister (Michael Gor) orchestrating attacks on American and Russian submarines while staging a coup to overthrow his nation's president (Alexander Diachenko, a Russian actor whose character, oddly, sounds more American than Butler's). Glass is recruited for rescue detail that quickly turns into a humanitarian effort; a team of Marines parachute onto foreign soil in order to save the kidnapped Russian prez; Gary Oldman, as the dyspeptic Chairman of the Joint Chiefs of Staff, screams a lot at Linda Cardellini and Common. And beyond the excessive busyness of the narrative – the international escapades not helped by being rife with barely comprehensible bureaucratic and military jargon – Hunter Killer is filled with unlikely or downright dopey touches, from the newbie Marine emerging as a superhumanly gifted sniper to the Russians who all speak to each other in English unless it's time for someone to say, “Da.” (A Russian meanie may be the chief villain, but the movie's true enemies appear to be subtitles.)

Still, for a preposterous mid-autumn time-waster, it isn't bad. Marsh pulls off one spectacularly clever, accurate-seeming image that I can't believe I haven't seen in a submarine thriller before, when Glass and his crew are submerging to the lower depths and reflexively tilt their bodies backward by a good 15 degrees in order to remain standing. There are cool shots of torpedoes closing in on their targets and a sub hidden within the bulk of an iceberg, plus smartly executed scenes of tension as Glass navigates his craft through explosive-laden hostile waters; although too much may be happening in the film, at least it happens speedily, and with few overt howlers in the conversation. Butler, meanwhile, may be doing his cranky, entitled Gerard Butler thing for the umpteenth time, but given that he's basically just around to provide blandly “inspiring” pep talks and stare at a bunch of control panels, even he can't do too much overall damage. All told, I didn't dislike Hunter Killer nearly as much as I expected, and found something rather charming in its optimistic view of American/Russian relations – even if we're also invited to cheer (and cheer my crowd did) every time a Russian got a bullet to the brain or a torpedo to the face. So much for détente. 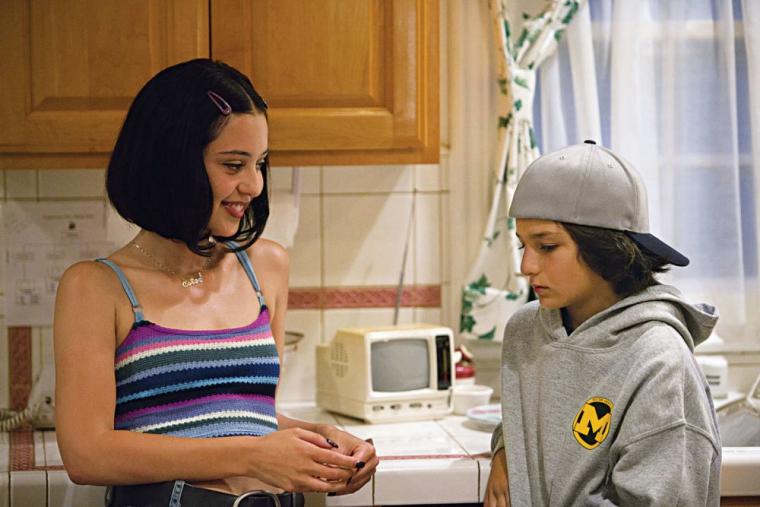 For as long as it's still on local screens, I urge you to check out Mid90s, Jonah Hill's funny, moving, tough-minded account of a few months in the life of Stevie (Sunny Suljic) – a Los Angeles-based youth (he looks about 13) who becomes the unofficial mascot to a group of older kids and begins experimenting with skateboarding, cigarettes, alcohol, drugs, and sex in roughly that order. Boasting strong, naturalistic performances by Suljic, Katherine Waterston, the increasingly versatile Lucas Hedges, and some awfully winning non-professionals, the movie plays – and I mean this as a compliment – like an emotionally, verbally, and sometimes physically violent after-school special. It's also one with just enough hearty laughs and moments of exquisite tenderness to make the experience satisfying and rewarding as opposed to merely wrenching.

Yet while Hill's film, with its priceless period touches (“It's Saturday … Blockbuster Video night!”) definitely deserves a cineplex visit, it'll also, eventually, make a perfect double-feature pairing with Bo Burnham's recent Eighth Grade, which is similarly incisive about the painful process of growing up and just as open-hearted toward its teen protagonist. I don't know what it means that two comedians – with Hill really more of a comic actor – chose to so thoroughly deconstruct early-teen existence for their writing/directing debuts this year. But we can only be thankful that they did, because like Burnam's clear-eyed Gen Z tale, Mid90 is a real beauty – a kind of gender-flipped Eighth Grade with more Nirvana (and Trent Reznor and Atticus Ross!) on the soundtrack and pleasures as diverse as Christopher Blauvelt's graceful super-16-millimeter camerawork, Jerrod Carmichael's riotous cameo, and Suljic's irresistible smile. “You're sweet,” says Stevie's much-older crush (Alexa Demie) minutes before his sexual initiation. “You're at the age before guys become dicks.” Those were a fun couple of years, weren't they, guys? 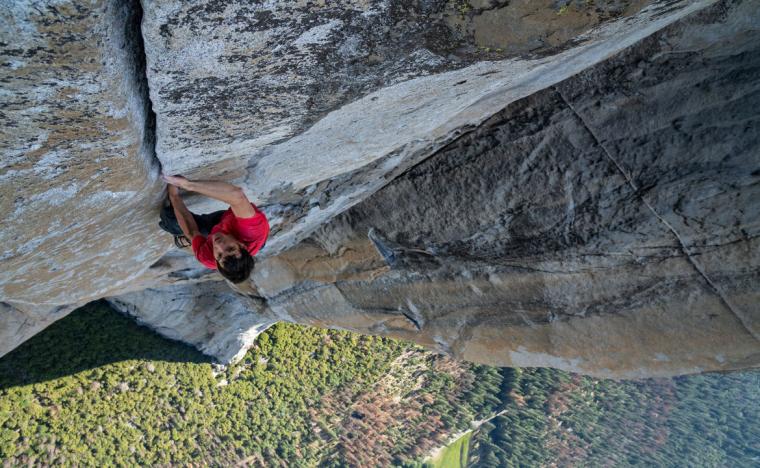 A fascinating extreme-sports documentary that's an even more fascinating exploration into its human subject, directors Elizabeth Chai Vasarhelyi's and Jimmy Chin's Free Solo (currently playing at Iowa City's FilmScene) follows professional rock climber Alex Honnold as he preps for his no-ropes-no-harnesses scale of Yosemite National Park's El Capitan, a 3,000-foot-high vertical rock formation described by an on-screen expert as “the center of the rock-climbing universe.” If the last 20 minutes of Robert Zemeckis' The Walk, with its nausea-inducing Twin Towers tightrope feat, made you feel uneasy, you're advised to maybe steer clear of this one, which finds even the doc's cameramen frequently turning away from the terrifying spectacle. If, however, you can stomach the vertigo, or at least keep your personal terror at bay for 100 minutes, the experience is absolutely enthralling.

Vasarhelyi and Chin do a sublime job of precisely delineating El Capitan's topography so we know exactly where Honnold's biggest challenges lie, making the thrill of watching him overcome them all the sweeter. (Happy Spoiler alert: The 33-year-old lives to tell his tale.) Yet the filmmakers, aided by the intensely forthright and empathetic Honnold, prove even more gifted at exploring what makes this particular rock climber tick – what might inspire a person to fashion a career out of a pursuit in which, as we're informed through a heartbreaking montage, even the most talented and dedicated climbers tend to wind up dead. The directors bring us so close to Honnold that even the material featuring the guy enjoying, or rather trying to enjoy, domesticity with his understandably fretful girlfriend Sanni McCandless is more riveting than such scenes usually are; when McCandless tape-measures space for their new refrigerator while Honnold absent-mindedly scrolls on his phone, you can practically feel the man's discomfort pouring out of him. Even at his most impenetrable, Honnold is sensational company in the trenchant, compelling, and exciting Free Solo, and I applaud Vasarhelyi's and Chin's movie for providing such a thorough look at our hero's physical-training regimen. I wish I'd known how much physical training may have been recommended to watch the movie.