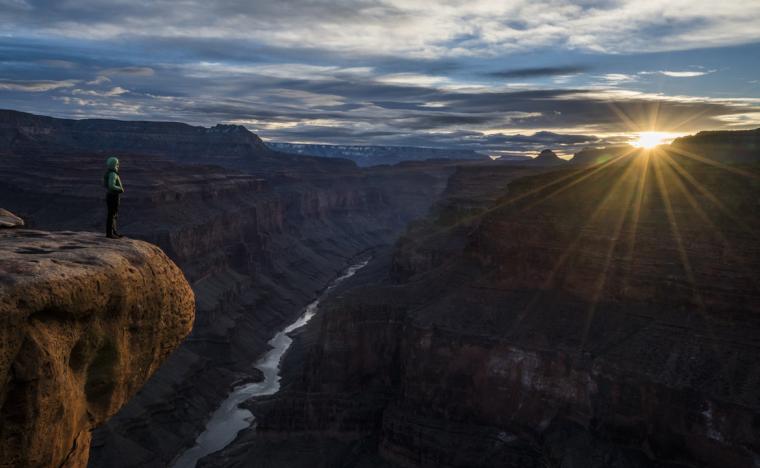 An annual presentation of entertaining education sponsored by River Action, Nahant Marsh, and the Tony Singh Family Foundation, the QC Environmental Film Series kicks off its 2021 season with filmmakers Pete McBride's and Kevin Fedarko's Into the Canyon, a magnificently photographed journey through the Grand Canyon that will be screened at Davenport's Figge Art Museum on August 29.

In 2016, filmmaker/photographer Pete McBride and writer Kevin Fedarko set out on a 750-mile journey on foot through the entire length of the Grand Canyon, and from the outset, the challenge was far more than they bargained for. More people have stood on the moon than have completed a continuous through-hike of the canyon. McBride and Fedarko took a sectional approach, achieving a feat that many adventurers have taken decades to complete, and that others have lost their lives trying. But their quest was more than just an endurance test – it was also a way to draw attention to the unprecedented threats facing one of our most revered landscapes.

Throughout their passage, McBride and Fedarko encountered an astonishingly diverse and powerful landscape, rich in history, that is now facing perhaps the gravest crisis in the 98-year history of the Grand Canyon National Park. Directed by McBride and produced by the award-winning team at Insignia Films, Into the Canyon is a story of extreme physical hardship that stretches the bonds of friendship, as well as a meditation on the timeless beauty of this sacred place. It is also an urgent warning about the environmental dangers that are placing one of America’s greatest monuments in peril, and a cautionary tale for our complex relationship with the natural world.

Native Coloradan McBride has spent two decades studying the world with a camera. A self-taught photographer, filmmaker, writer, and public speaker, he is a Sony Artisan of Imagery and has traveled on assignment to more than 75 countries for such organizations as the National Geographic Society, Smithsonian, Google, and the Nature Conservancy. He has also spoken on stages for TEDx, The World Economic Forum, USAID, Nat Geo Live, and more. After a decade documenting remote expeditions from Everest to Antarctica, McBride decided to focus his cameras closer to home on a subject closer to his heart – his backyard river, the Colorado. Four years and 1,500 river-miles later, McBride produced an acclaimed book and three award-winning documentaries, and co-hosted a PBS TV program. Other watersheds soon called, including a source-to-sea look at India’s sacred Ganges River, and upon completing that journey, the National Geographic Society named McBride a “Freshwater Hero.”

Following the August 29 screening of Into the Canyon, the QC Environmental Film Series will continue this fall with four additional titles that will enjoy Figge Art Museum screenings: Kiss the Ground (September 12), An American Ascent (October 3), Story of Plastic (October 17), and Sustainable Nation (November 24).

Into the Canyon will be presented at the Figge at 2 p.m. on August 29, admission is $5 ($20 for a pass to all five films in the series), and more information on the QC Environmental Film Series is available by calling (563)322-2969 and visiting RiverAction.org.