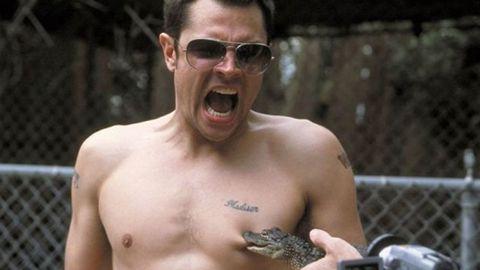 Johnny Knoxville in Jackass: The Movie

Before our cineplexes, and this column, become completely inundated with family-oriented holiday fare such as Treasure Planet, the latest Harry Potter, and The Santa Clause 2 (which is already in release ... how is it that holiday movies, like Christmas decorations at the mall, now routinely arrive the day after Halloween?), let's take a brief look at some of autumn's more adult works, a couple of which - unsurprisingly - have already left a theatre near you.

I thought I'd have to work a bit harder at defending Jackass the Movie, but astonishingly, I've yet to read an unfavorable review of it. (It's possible that I haven't done a completely thorough search.) That's because it's damned funny, though not quite as funny as the MTV series that inspired it. In the feature film, the gross-out stunts and elaborate pranks that Johnny Knoxville and his Jackass cronies pull off are presented in an annoying fade-to-black style; just when you're doubled-over laughing at some sublimely nauseating payoff, the screen goes dark, there's a pause, and we encounter a new setup; this happens continually over the course of the movie's just-long-enough 80 minutes, and it kills the film's momentum. (This won't be so bothersome once the movie hits DVD, as its format is ideal for a chapter search.) Yet despite the blackouts, the crummy cinematography, and the routines that just don't go anywhere, Jackass the Movie is a totally ingratiating experience. Along with the inspired Y tu mama tambien, Jackass is one of the very few 2002 movies to be suffused with joy; Knoxville and his self-flagellating pals are having such fun behaving like imbeciles - they're like members of a frat house you'd be scared to join but would secretly love to - that they're utterly winning. Even though the movie revels in bodily fluids (and solids), its heart is shockingly pure; the Jackass troupe is having the time of their masochistic lives and inviting you to join them. So, bully to the audiences and critics who cheerfully admit to enjoying the film, and cheers to the Jackass team for creating the ultimate cinematic paean to heterosexual alpha males and filling it with male nudity. Now that's subversive. The sordid life and unresolved death of Hogan's Heroes star Bob Crane is the subject of Paul Schrader's Auto Focus, which, with its script by Michael Gerbosi, explores definitive Schrader themes: obsession, guilt, desperation, violence. And since I have a lower threshold for Schrader's unremitting bleakness than most critics - I could barely stand his Oscar-winning Affliction - it's a pleasure to report that there are moments in his latest work that are actually fun. (I'm racking my brain trying to recall a previous Schrader movie that had jokes in it.) The film is powered by marvelous performances by Greg Kinnear as Crane and Willem Dafoe as Crane's chief stooge, John Carpenter - both give tremendous portrayals of men so self-deceiving that they inadvertently destroy everything around them - but what makes this work tower over Schrader's previous output is its tone; the sheer ludicrousness of Crane's video-porn addiction is treated with just the right mixture of detached fascination, black comedy, and surprising empathy. (It must have been incredibly difficult to detail a character's sex addiction without either moralizing or wallowing in the seedy behavior, but Schrader and Gerbosi pull it off.) Auto Focus has its share of flaws - Crane's wives (played by Rita Wilson and Maria Bello) are ill-served by the material, and there's a dramatic hole at the finale, as we never see how Crane's murder affects Carpenter (whom the film implies is the murderer) - yet it's an engrossing, psychologically rich tale, well-told, and for a Schrader film, it's remarkably easy to sit through. Ghost Ship's opening credits read "A Buena Vista Production," followed by the film's title, written in pretty pink, cursive letters, and accompanied by a lush orchestral score that reminds you of Disney at its most simpering. Oh my God, you think, is Hayley Mills going to be in this? What follows is a prelude to the film proper, with hundreds of happy celebrants aboard an ocean liner drinking, dancing, and after a few minutes, being eviscerated by a snapping steel wire, which rips through them like a Ginsu through butter, forever separating the passengers' upper halves from their lower. It's probably the most satisfying shock scene - both sickening and hilarious - the movies have offered since Samuel L. Jackson's demise in Deep Blue Sea, and I prayed that director Steve Beck would follow this stellar opening with equally enjoyable thrills. But given his material, he can't. The film, about the haunting of said ocean liner and the salvage team that gets stranded on it, becomes mired in a series of haunted-house-on-a-ship clichés; the cast, filled with usually fine actors (Julianna Margulies, Gabriel Byrne, Isaiah Washington, Ron Eldard), is uniformly terrible; and it all ends with a burst of metaphysical hokeyness that would embarrass John Edward. Ghost Ship is barely worth discussing, yet that prologue shouldn't be devalued; in a mere three minutes, Steve Beck shows that, given the right script, he's capable of scaring the bejeezus out of us. Formula 51 isn't a movie you watch. It's a movie you stare at, open-mouthed, dumb with disbelief. What in the name of all that's holy is going on here? You have a kilt-wearing Samuel L. Jackson as some kind of drug entrepreneur attacking people with golf clubs, Robert Carlyle as a foul-mouthed football enthusiast, Emily Mortimer as Carlyle's ex-girlfriend who happens to be a hired assassin who might be trying to off them both, Meat Loaf as a severely scarred crime lord who, in the first 15 minutes, survives a chemical explosion with barely a bruise, grotesque shoot-'em-ups by the score, a dreary romance, semantic arguments about the phrase "take care of him," fish 'n' chips ... I'd continue, but my head is about to explode. A gruesome bastard child of Pulp Fiction, Formula 51 feels almost aggressively self-satisfied by its own inanity; director Ronny Yu and screenwriter Stel Pavlou apparently think it would be uncool to give us characters and situations that were, I dunno, coherent. Finally, in Moonlight Mile, Susan Sarandon shows some fire as an edgily grieving mother, Holly Hunter gives her brief scenes some snap, and Dustin Hoffman and Jake Gyllenhaal do what they can with roles that make little sense. But if you missed Brad Silberling's writing/directing effort during its brief run - a laughter-through-tears melodrama so contrived, gimmicky, and blatantly phony that the addition of a studio audience's laugh-and-sigh track wouldn't be at all inappropriate - have no fear; it'll probably show up on Lifetime television any day now.