A Kiss-Off That Ends with a Kiss: “Fantasy Island,” “Downhill,” “Sonic the Hedgehog,” and “The Photograph” 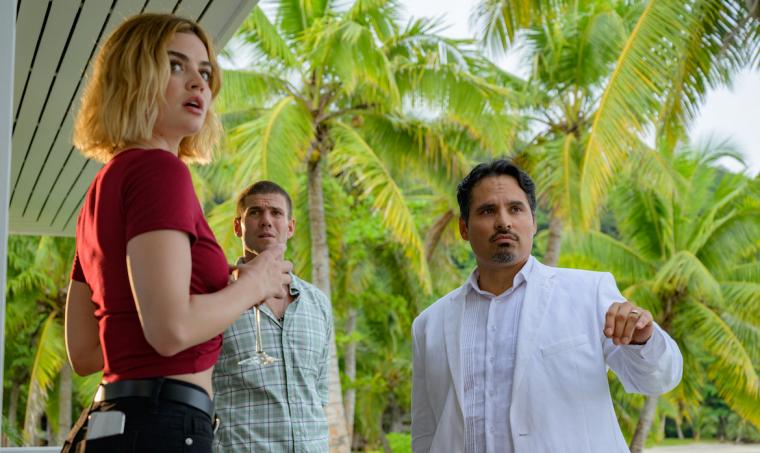 Friday, February 14, 10:30 a.m.-ish: As I deeply love movies, and have been known to occasionally fall in love with movies, it feels appropriate that I'd spend a large chunk of this year's Valentine's Day at my first quadruple feature in 10 months. Yet while previous four-fers have started better, I'm not sure any of them have started weirder than this one, given that it begins with a reboot of television's Fantasy Island, that deliciously cheesy Aaron Spelling soap that demanded “Smiles, everyone, smiles!” from the start and almost couldn't help but deliver them. Those who recall this guilty pleasure from 1977 to 1984 no doubt remember the show for its goofy yet somewhat sinister wish-fulfillment premise, its weekly parade of fading-star guests, Ricardo Montalban's ultra-suave Mr. Roarke in his gleaming white suit, and Hervé Villechaize's trusty sidekick Tattoo chanting, “The plane! The Plane!” What they won't remember, and what this Blumhouse horror flick delivers instead, are the zombies that weep black goo, the torture chamber straight out of Saw, the hulking killer with his lips stapled shut, and only one excited cry of “The plane!” Fittingly, compared to nearly any episode of the TV series, this Fantasy Island is only about half as much fun.

In all honesty, that's still more fun than I was anticipating. After the plane's five passengers disembark and they relay their individual fantasies – accepting a marriage proposal, becoming a soldier, getting revenge on a high-school tormentor, indulging in unapologetic (PG-13) hedonism – director Jeff Wadlow's outing has an initial good time with its “be careful what you wish for” scenarios, and the cast certainly appears game. Michael Peña, as Mr. Rourke, doesn't have Montalban's ease or style (the role screams for Antonio Banderas, whom I hope turned the offer down), but Maggie Q and Lucy Hale, her wide eyes just right for popping, are terrific, and Ryan Hansen and Jimmy O. Yang redeem much of their dully raucous material through sheer dimwit likability. (I suppose it's a mark of progress that while both men play alpha-bros, Yang's character is a gay alpha-bro.) Yet the film makes less and less sense as it progresses, with the “rules” of the island both overly explained and naggingly ill-defined, and especially for a Blumhouse release, the picture isn't the least bit scary, with its most frightening element probably the grim overacting of over-actor extraordinaire Michael Rooker. The idea of rebooting Fantasy Island as a sun-drenched horror movie is actually pretty inspired. Too bad that this one, for me, only inspired an ever-growing wish for the movie to end. 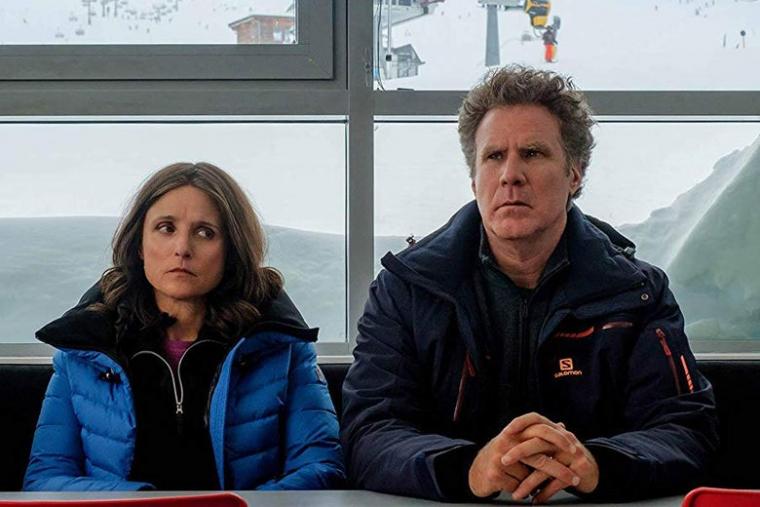 12:45 p.m.-ish: A remake of a famously tacky TV show from the '70s is one thing. A remake of an absolutely outstanding movie from a mere six years ago is something else entirely. And so even more than Fantasy Island, I was largely dreading the prospect of Downhill, the American re-do of Ruben Östlund's Swedish-language sensation Force Majeure. A biting dark comedy about an Alpine family vacation that goes all sorts of wrong after a middle-aged man instinctively abandons his wife and kids in the face of an approaching avalanche, Force Majeure is both marvelously entertaining and, for a subtitled work, incredibly accessible. Consequently, a remake of this property seemed more unnecessary than most, and I also presumed that directors Nat Faxon and Jim Rash – whether by choice or just the laws of Hollywood – would Ugly American-ize things in the extreme with a broad, slapstick-y take on Östlund devastatingly subtle achievement. But color me amazed: Downhill is actually pretty great. Despite the inclusion of a few lazy stereotypes, it's really only broad in comparison to most American comedies, and the film manages to nearly equal its forebear in terms of thematic richness, emotional precision, and exquisitely crafted comic awkwardness. There's no reason for it to exist, but I'm unexpectedly delighted that it does.

If there has been any downside to Julia Louis-Dreyfus' omnipresence in sitcoms over the last 30 years, it's that her demanding TV schedule apparently hasn't afforded her the time or opportunity to make more movies. (She was a smashing lead in the 2013 romantic comedy Enough Said – and, astonishingly, that was the only full-length feature she appeared in during the last decade.) Downhill is a testament to what we've been missing. Hilarious and heartbreaking in equal measure, Louis-Dreyfus delivers epic meltdowns in miniature here, her momentarily abandoned spouse so consumed with rage, confusion, and disbelief that she can't quite find the words to express herself – and when she does, boy oh boy, watch out. Finding continually sharp, thoughtful vocal and physical avenues for all of her character's roiling feelings, the performer is in staggeringly fine form here, yet the bigger shock may be that Will Ferrell comes close to matching her. It's been so long since the comedian has been asked to leave his obtuse-goofball comfort zone that his unhappy hubby's pained humiliation and desperate need to make amends (if he only knew how) feel revalatory; in what might be Ferrell's strongest film portrayal since 2006's Stranger Than Fiction, he's reliably funny yet oddly, almost helplessly moving. I wish the roles enacted by Miranda Otto and Zach Woods were less cartoonish, and the finale is no match for Force Majeure's, with the canned uplift feeling like a letdown after so much thrilling comic ambiguity. Yet Downhill remains a brisk, meticulously composed, unexpectedly trenchant comedy, with Louis-Dreyfus and Ferrell even more terrific together than they were last Sunday as co-presenters at the Oscars. Blessedly, it wasn't all downhill from there. 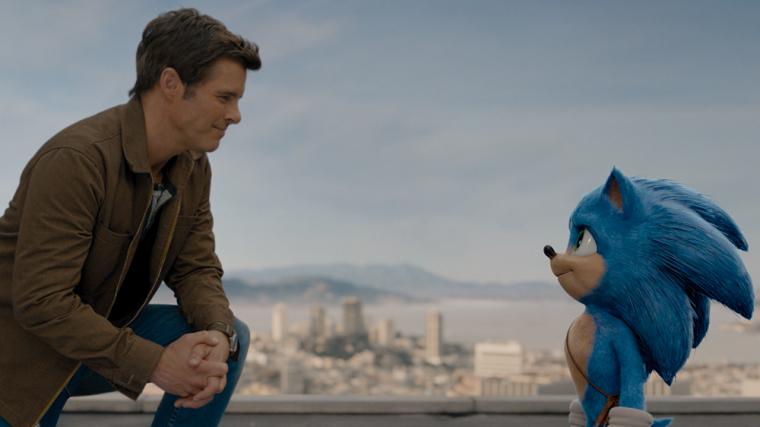 2:10-ish: Because Faxon's and Rash's offering runs a tidy, ideal 85 minutes, I make it just in time for my third movie of the day, which I enter with less trepidation than I otherwise might have: If the Force Majeure remake can really work, and the Fantasy Island remake can half-work, just how bad could the family-friendly action comedy Sonic the Hedgehog be? Ninety-five excruciating minutes later, I have my answer.

Look, I get it. As someone who's never played the video game, and who's never watched anyone else play the video game, the appeal of director Jeff Fowler's manic kiddie flick was probably always going to be lost on me, and if my favorite five-year-old had joined me for the screening, I undoubtedly would have had more fun. But the kid was in school and Jim Carrey was at least on hand to sputter nonsense and tie his body into a pretzel, so I tried to make the best of it. I failed. From the speedy blue critter's incessantly annoying voice-over narration to the plot that was like a pureed blend of E.T. and Doctor Strange to the patronizing “there's no place like Smalltown U.S.A.” sentimentality, I yawned and rolled my eyes throughout, and grew actively incensed every time this blatant commercial for itself also acted as a commercial for others. (One can only imagine how much the Olive Garden ponied up for the lavish love the chain is given here.) The effects are decent enough, even though Sonic's light-speed travels are blatant rip-offs of the Quicksilver routines in the X-Men films, and human lead James Marsden is surprisingly endearing given that he likely had to perform most of his role staring at a cantaloupe that would be given CGI fur later. I still wanted to drop-kick this unfunny, hyper-active time-waster into the ether, and my heart practically bled for Carrey, who tries so hard to wring laughs from his grim shtick that I'm amazed he didn't sprain a wrist. There have been worse video-game adaptations than Sonic the Hedgehog, but few that made me so desperate for a neighboring Space Invaders to blast them out of the cineplex. 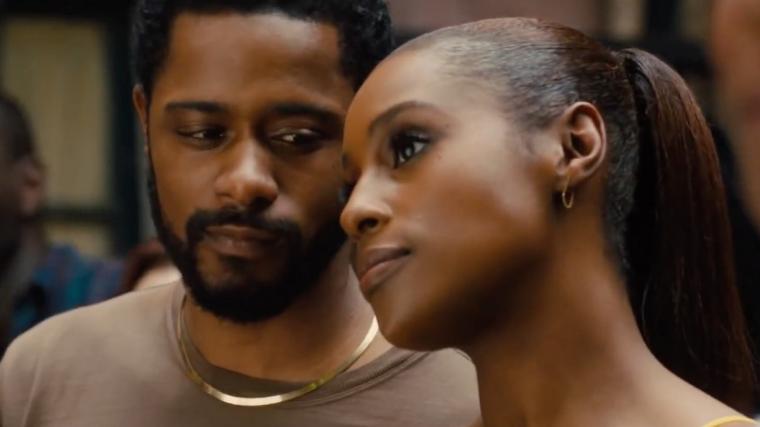 4:25-ish: All told, between Fantasy Island and the Louis-Dreyfus/Ferrell squabbles and the forced playfulness exerted by Sonic's James Marsden and screen wife Tika Sumpter, this has proven to be a lousy Valentine's Day for cinematic romance. That all changes, however, with writer/director Stella Meghie's The Photograph, the first grownup love story in ages to leave me legitimately choked up at the end. Actually, I should probably amend that to “love stories” plural, as in addition to the present-day union that develops between LaKeith Stanfield's journalist and Issa Rae's museum curator, we're also given a 1980s flashback detour involving the aborted, years-long relationship between Rae's photographer mother (Chanté Adams) and a kindly crab fisherman (Y'Lan Noel). These sorts of bifurcated, love-among-the-generations sagas rarely work, given that one screen couple nearly always dominates your attentions and affections over the other. (And please don't get me started on the exception that should be 2004's The Notebook: I love Gosling and McAdams; I love Garner and Rowlands; I hate that piece of dewy-eyed Nicholas Sparks treacle.) In Meghie's hands, though, the scenes between Adams and Noel, beyond being narratively essential, vibrate with romantic ardor and the lingering threat of inevitable heartbreak. The scenes between Stanfield and Rae, meanwhile, are absolute bliss – so unashamedly sincere in their richness of feeling, and so satisfying in their blend of pathos and humor, that the entire, long-dormant genre that is the rom-dram seems to be revitalizing itself before your very eyes.

Stanfield and Rae are known primarily as TV comedians – he from FX's Atlanta, she from HBO's Insecure – and Meghie's movie makes a sensational argument for more naturally funny people taking on the leads in big-screen romantic dramas. As each is also expert at playing things straight, the well-delineated emotional and career-driven obstacles on their characters' paths toward happiness are handled with admirable seriousness and visible internal struggle. But when the pair is just hanging out and reveling in their smooth back-and-forth – arguing over their individual preferences for Drake and Kendrick Lamar, for instance, or marveling over the speed of a courtship that neither wants to slow down – Stanfield and Rae are charmingly riveting together. There's so much effortless chemistry between them that you can't help but smile (you damned near giggle) at their every encounter, and the good vibes are sustained even through the film's more contrived situations and its genre's inherent predictability. I couldn't have asked for a Valentine's Day quadruple feature to end on such a dynamically romantic note, and beyond its foursome of lovers, The Photograph also serves up a delectable supporting cast boasting first-rate work from Rob Morgan, Kelvin Harrison Jr., Courtney B. Vance, Teyonah Parris, and the hysterical Lil Rey Howery. The last time Howery and Stanfield co-starred in a February release was three years ago when they found themselves confronting the comedic horrors of Get Out. This time, thankfully for them, Allison Williams is nowhere in sight.

6:30-ish: Void of romantic obligations on this Valentine's Day, I head home, and am soon enjoying an evening with a similarly date-less pal who uses the holiday as an excuse to whip my ass in chess. Love takes all forms, I guess.