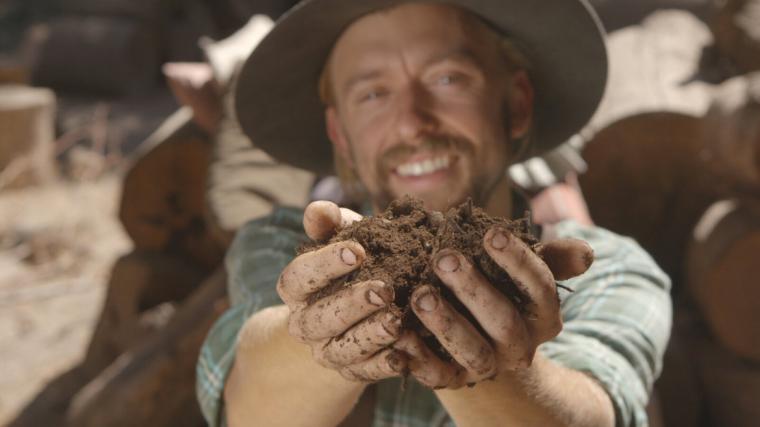 "Kiss the Ground" at the Figge Art Museum - September 12.

Lauded by TV Guide as “passionate” and by Awards Daily as “groundbreaking,” the documentary hit Kiss the Ground serves as the latest presentation in River Action's annual QC Environmental Film Series, the movie's September 12 screening at Davenport's Figge Art Museum sure to demonstrate why the New York Times raved that the work “inspires a rare feeling of hope.”

Narrated by Emmy-winning, Oscar-nominated actor and activist Woody Harrelson, Kiss the Ground explores one of our first viable solutions to the climate crisis, revealing that, by regenerating the world’s soils, we can completely and rapidly stabilize Earth’s climate, restore lost ecosystems, and create abundant food supplies. Using compelling graphics and visuals, along with striking NASA and NOAA footage, the film artfully illustrates how, by drawing down atmospheric carbon, soil is the missing piece of the climate puzzle. The winner of more than a dozen film-festival prizes and an official selection at the 2020 Tribeca Film Festival, Kiss the Ground is positioned to catalyze a movement in order to accomplish the theoretically impossible and solve humanity’s greatest challenges: to balance the climate and secure our species' future.

Serving as Kiss the Ground's producer/directors are the team of Josh and Rebecca Tickell. The author of four books, Josh has worked on environmental issues for more than 20 years, his career spanning a unique mixture of science, journalism, and filmmaking. His directorial debut Fuel was the 2008 Sundance Audience Award-winning documentary that investigates the possible replacement of fossil fuels with renewable energy, and his 2017 book Kiss the Ground: How the Food You Eat Can Reverse Climate Change, Heal Your Body, & Ultimately Save Our World was an Amazon Bestseller in multiple categories. Josh holds an MFA in film from Florida State University’s Film School and gives frequent keynote presentations internationally on sustainability, regeneration, and filmmaking.

Rebecca Tickell is a director, producer, and environmental author and activist who produced Fuel and co-directed/produced The Big Fix, an official selection at the 2011 Cannes Film Festival. She spent several years documenting the impacts and root cause of the BP oil spill, and while investigating the event, Rebecca became ill and was left with permanent damage from exposure to the oil and dispersant in the atmosphere. Her directorial debut (with husband Josh) was the critically acclaimed documentary Pump, narrated by Jason Bateman, and she also directed and produced the John Paul DeJoria story Good Fortune, the YouTube sensation The Earthing Movie, and the forthcoming films The Revolution Generation and Heartland.

Kiss the Ground will be presented at the Figge at 2 p.m. on September 12, admission is $5 ($20 for a pass to all the films in the series), and more information on the QC Environmental Film Series is available by calling (563)322-2969 and visiting RiverAction.org.