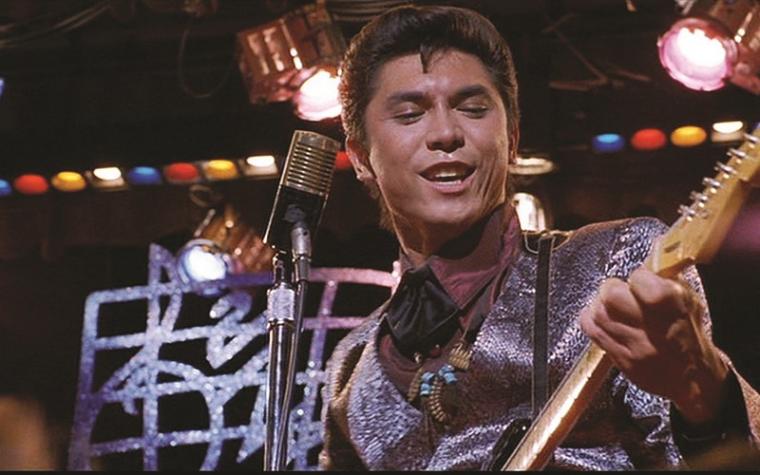 A biographical drama written and directed by Luis Valdez, La Bamba follows the too-short life of the artist born Richard Steven Valenzuela, who, prior to his death at age 17, was a singer, songwriter, guitarist, rock-and-roll pioneer, and forefather of the Chicano rock movement. Although Valens had several hits, he was best-known for the movie's title tune, which he had adapted from a Mexican folk song. Valens transformed the composition into one with a rock rhythm and beat, and it became an immediate hit in 1958, putting young Valens at the forefront of the Spanish-speaking rock-and-roll movement. He also had a number-two hit with "Donna," but on February 3, 1959 – what has become known as "The Day the Music Died" – Valens died in a plane crash in Iowa, an accident that also claimed the lives of fellow musicians Buddy Holly and J. P. "The Big Bopper" Richardson, as well as pilot Roger Peterson. Valens' legacy, however, continued to live on, and in 2001, the late artist was inducted into the Rock and Roll Hall of Fame.

With its cast including Esai Morales, Rosanna DeSoto, Elizabeth Peña, and Joe Pantoliano, La Bamba was notable for its breakthrough star Lou Diamond Phillips, a frequent film and television actor who went on to earn a Tony Award nomination for playing the King of Siam in a Broadway revival of The King & I. Nominated for a Golden Globe Award for Best Picture - Drama, Valdez's movie eventually grossed $52,678,820 in the United States and received numerous critical accolades. The New York Times' Janet Maslin wrote, "A film like this is quite naturally a showcase for its star, and as Valens, Lou Diamond Phillips has a sweetness and sincerity that in no way diminish the toughness of his onstage persona." Roger Ebert, meanwhile, said of La Bamba, "The best things in it are the most unexpected things: the portraits of everyday life, of a loving mother, of a brother who loves and resents him, of a kid growing up and tasting fame and leaving everyone standing around at his funeral shocked that his life ended just as it seemed to be beginning." In 2017, La Bamba was included in the annual selection of 25 motion pictures added to the National Film Registry of the Library of Congress, having been deemed "culturally, historically, or aesthetically significant" and recommended for preservation.

La Bamba will be screened at Rave Cinemas Davenport 53rd 18 + IMAX at 3 & 7 p.m. on April 18, and at 7 p.m. on April 21 and 22. For more information on the presentation, visit Cinemark.com, and for more on the seventh-annual TCM Big Screen Classics series, visit FathomEvents.com.