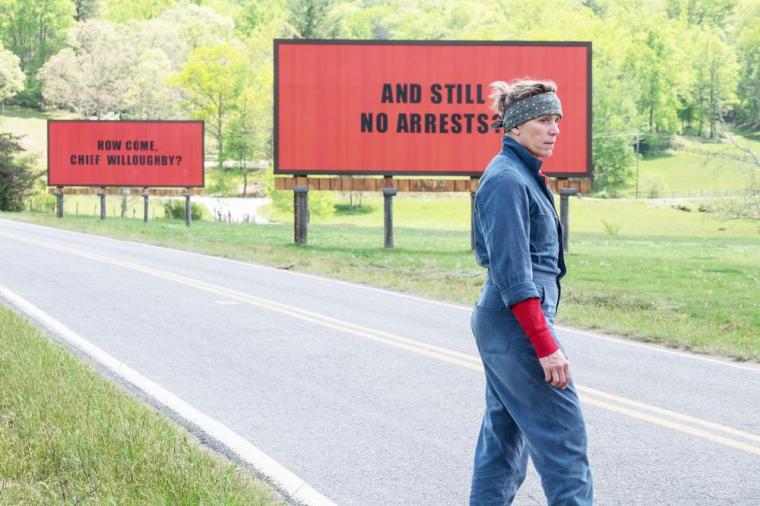 Martin McDonagh's latest genre hybrid, the comedy/tragedy/mystery/procedural Three Billboards Outside Ebbing, Missouri, is a mess. As messes go, though, it's one of 2017's most confident and entertaining, and might easily reward repeat viewings more than many other far-better movies. I loved Dunkirk, for example, yet as the months pass, I'm feeling little desire to revisit the experience. I barely liked Three Billboards, but even with its details still fresh in mind, I'm already antsy to see it again.

From a personal perspective, part of that can be chalked up to my general fondness for McDonagh's works, even if this new outing by the writer/director of In Bruges and Seven Psychopaths, and the author of plenty of terrific stage plays, can't help but expose some of his most glaring deficiencies. Frances McDormand portrays Mildred Hayes, a 50-something gift-shop employee whose teen daughter Angela (Kathryn Newton), at the time of the film's start, was raped, murdered, and set afire seven months prior. The girl's killer hasn't been caught, and hoping to chide local law enforcement into stepping up their efforts and solving the crime, Mildred rents a trio of billboards near her house with its message spelled out in black block letters against blood-red backgrounds: “RAPED WHILE DYING,” “AND STILL NO ARRESTS,” “HOW COME, CHIEF WILLOUGHBY?”

Ebbing's beloved sheriff Bill Willoughby (Woody Harrelson) bristles at the publicly personal attack, as do his devoted fellow officers – particularly his racist, lunkheaded ally Jason Dixon (Sam Rockwell) – and most of the town's other residents. But while McDonagh would appear to be setting up a rather simplistic, politically safe Us-Versus-Them narrative involving a grieving victim who retaliates against ineffectual cops, that's actually not what Three Billboards' creator has planned. Willoughby, it turns out, isn't cruelly insensitive to Mildred's frustration and fury, and is similarly exasperated that seven months of investigation, inquiries, and inconclusive DNA evidence have led to zero clues. Mildred, unfathomably pained though she is, isn't a blandly sympathetic heroine, but rather a fiercely pissed-off warrior with no time for sentiment – not even when Willoughby reveals that he has terminal cancer. (When the sheriff asks her to have the billboards taken down out of kindness, Mildred quickly retorts, “They wouldn't be so effective after you croak, right?”) Even the abusive, criminally stupid Dixon, his bigotry clearly inherited from the growling mother (Sandy Martin) with whom he still lives, proves not to be the irredeemable soul his early words and deeds would lead you to expect. 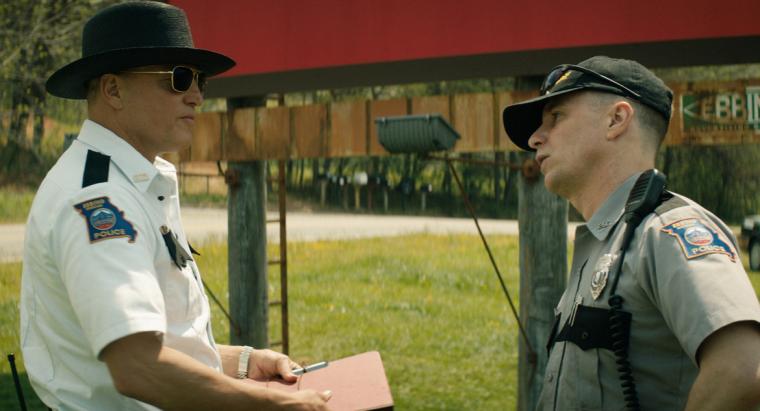 McDonagh, in short, is presenting us with deliberate clichés in order to upend them, and in the process, is asking profound questions about human nature: Can there be such a thing as fairness in an unreasonable world? How far is too far in the pursuit of justice? What are the limits of empathy? (And do they extend to Mildred countering a shady comment from her dentist by drilling a hole in the man's thumb?) Three Billboards doesn't pretend to offer answers, but McDonagh's raising of the issues is in itself exciting and rewarding, especially when they're explored with as much performance vigor and intellect, and with as many examples of strong writing, as we're given here. That makes it all the more maddening that McDonagh, in his third feature film, isn't more frequently at the top of his game, and that the movie's lapses in tone, style, and taste – lapses that are sadly not uncommon in the McDonagh oeuvre – continually keep true greatness out of its grasp.

What's most jarring, if almost refreshing, about Three Billboards' considerable problems is that they don't sneak up and slowly gnaw away at you – they're hurled at you front-and-center so they're impossible to miss. Take the movie's women: With the major exception of McDormand's Mildred, and the minor exception of Martin's amusingly loathsome Momma Dixon, they're pretty embarrassing. Despite exceptions such as his 1998 Tony winner The Beauty Queen of Leenane, McDonagh has never shown much interest in, or talent for, the writing of female characters, which may be why so few exist in his films and plays. But Willoughby's wife Anne (Abbie Cornish) is a cipher, memorable only for being the only Ebbing resident with an Australian accent. Mildred's co-worker Denise (Amanda Warren) seems to be around only to show that Mildred, unlike the rest of the local citizenry, has at least one black friend. And the town's younger women – including a chirpy TV personality and not necessarily excluding the late Angela – are all shown to be vapid, shrill, and dopey, particularly the 19-year-old dip Penelope (Samara Weaving), the new girlfriend to Mildred's ex-husband (John Hawkes) who confuses “polo” with “polio.” (McDonagh is at his most unpleasantly flip when buttoning a violent family squabble with the comic-relief interruption of Penelope, who tells the clan she needs to pee.)

But I'm not sure that these females are treated much worse than Peter Dinklage, who, as the nicest guy in Ebbing, has to endure repeated jokes about his height and all but drowns in his character's ladled-on sentimentality. (A dwarf was similarly used for comically exotic “other”-ness in In Bruges; it might be up to McDonagh's therapist to explain why.) And even the most textured figures here are routinely at the mercy of the film's wildly divergent moods and presentational leanings: scenes of kitchen-sink drama that mesh uncomfortably with slapstick farce; unbelievable narrative contrivances that feel like parody played straight; an overall air of realism that, in one theatrically shot act of arson, wholly concedes to surreality. (Nothing in the movie is crazier, or pulls us out of the experience more, than the apparent aural strength of Dixon's earbuds, which manage to drown out the sounds of exploding Molotov cocktails 10 feet away from him.) There's so much that's good, even excellent, about Three Billboards that its failings stand out more blatantly than they otherwise might've; even the guaranteed audience laugh, familiar from the previews, of Mildred accosting a reporter during a drive-by dies in context. How on earth did Mildred manage to hear the insult that inspires her profane response? 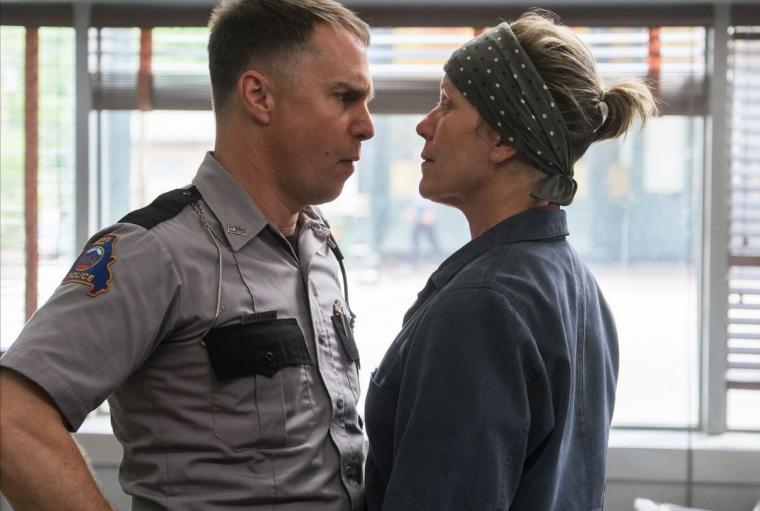 I have other grievances, from the material's unmistakably stage-bound nature – Ebbing feels like the land of 10 characters and five settings – to the latest mush-mouthed performance by Caleb Landry Jones, who has clear talent but is in desperate need of a vocal coach. (Jones' remarkable 2017 output includes roles in Get Out, The Florida Project, American Made, and Twin Peaks: The Return, and in none of them did I find his readings fully comprehensible.) But despite the specificity and quantity of my complaints, I can't pretend I'm not eager for another rendezvous with McDonagh's film and its Missouri residents.

That's partly because of its occasional scenes of shocking power, such as the one in which Mildred finally gauges the depth of Willoughby's illness, and its frequent examples of blisteringly fine punchlines, conversations, and monologues. (Mildred's comparison of Catholic Church leaders to the Crips and the Bloods will no doubt be delivered in acting classes for decades to come – though maybe not in Catholic schools.) It's partly because of the film's ridiculously appealing supporting cast, with even the weaker characters a pleasure to be around thanks to their portrayers, and especially notable work contributed by the grizzled and decent Harrelson, Lucas Hedges as Mildred's wary and heartbroken son, and Rockwell. Miraculously, in what may be the finest film performance yet by this eternally underrated performer, Rockwell appears to transform about a half-dozen stereotypes into one marvelously complicated, bitterly tragicomic individual.

Mostly, however, it's because of McDormand, who takes her role by the throat and squeezes it for every ounce of anguish, humor, and humanity it contains. That turns out to be a helluva lot. Reaching levels of tortured emotional repression and explosion that feel nearly cleansing in their bracing honesty, McDormand, when she's on-screen, makes it impossible to look anywhere else, as the entire story exists firmly in the fire of Mildred's eyes and the stern set of her jaw. It's when those eyes momentarily lose that fire, and that jaw reflexively quivers, that Three Billboards Outside Ebbing, Missouri ultimately wrecks you. For all of his movie's flaws, McDonagh has given McDormand the gift of a lifetime in Mildred Hayes. Thank heaven, for we movie lovers, it's a gift she appears visibly thrilled to share.