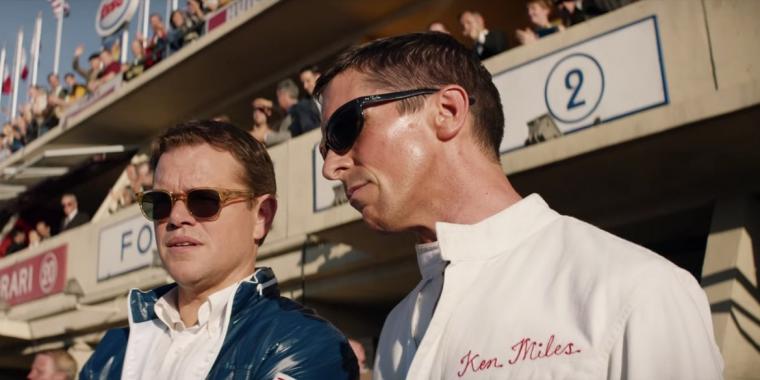 In 2013, Ron Howard directed the professional-racing drama Rush, which explored the legendary rivalry between Formula One sensations James Hunt and Niki Lauda and their competition at 1976's Japanese Grand Prix. Its speedway scenes were spectacular, but the storytelling was largely inert, and with its protagonists/antagonists played by the solid yet ultimately forgettable Chris Hemsworth and Daniel Brühl, the film was a box-office disappointment. Director James Mangold's new professional-racing drama Ford v Ferrari, however, feels like Rush done right: similarly enthralling on the racetrack, but with the added benefits of a more involving narrative, first-rate star turns by Matt Damon and Christian Bale, and – something Rush really lacked – a bunch of topnotch supporting portrayals. (Fittingly, Mangold's achievement has already earned more in domestic release, over one weekend, than Howard's did during its entire run.) All told, Ford v Ferrari feels like one of the best Ron Howard movies Ron Howard never made. I just wish that were more of a compliment than it actually is.

Unlike with Rush, the rivalry at the heart of Mangold's latest – one set 10 years before the events of Howard's film – isn't between its leading men, but rather its more peripheral figures Henry Ford II (Tracy Letts) and his across-the-ocean nemesis Enzo Ferrari (Remo Girone). Incensed that Ferrari's cars, Italian cars, have beaten those of American manufacturers at the 24 Hours of Le Mans four years in a row, Ford sends emissary and Ford Motor Company vice president Lee Iacocca (Jon Bernthal) to Italy with an offer to purchase Ferrari's automotive line. Ferrari refuses, eventually signing a deal with Fiat instead, and sends Iaccoca back to Ford with a definitive no and a few choice insults, to boot. His eyes gleaming with “This means war” intensity and just a hint of a smile (a moment beautifully enacted by Letts), Ford orders the creation of a race car that'll leave Ferrari, all Ferraris, in the dust at the next Le Mans. Enter Carroll Shelby (Damon), a former Le Mans champ and current designer/engineer, and Ken Miles (Bale), a fearless racing pro and world-class hothead who's the only person Shelby trusts to cross the finish line first.

Damon and Bale, of course, have been in-demand film stars for more than two decades, so it's kind of shocking that Ford v Ferrari marks their first time performing opposite one another. I'd argue that the most appropriate response to this information, while watching Mangold's movie, is, “What the hell took so long?” Playing a can-do Texan with easy charm, a sturdy moral code, and an omnipresent Stetson (much like his Sheriff LeBoeuf in the Coen brothers' 2010 True Grit), Damon is clearly in his element; he's the rare actor who can, under the right circumstances, make dignity and decency charismatic. And Bale, taking a deserved break from American accents, is terrifically entertaining as a combustible Cockney who always knows better and can't help but constantly share that fact. In other words, they're oil and water, and such an enjoyable odd couple that even though they share the screen with regularity, you can't help but wish Damon and Bale had even more scenes together. Screenwriters Jez Butterworth, John-Henry Butterworth, and Jason Keller do a lot of things right here, but I think I most appreciated what they didn't do, which was design Shelby's and Miles' arc in that timeworn fashion of temperamental opposites who grudgingly learn to respect one another's differences. Barring their love of racing and competitive streaks, these two are totally dissimilar. Yet from the movie's start, that's never shown to be an impediment to their mutual goal of winning Le Mans – or, for that matter, to their friendship, which Damon and Bale make clear is one built on shared humor and intelligence, and deep mutual respect. The drama in Ford v Ferrari, happily, isn't “Shelby v Miles.” It's “Shelby and Miles v Everyone Else,” and with Damon and Bale at their finest, that proves to be a hugely winning strategy. 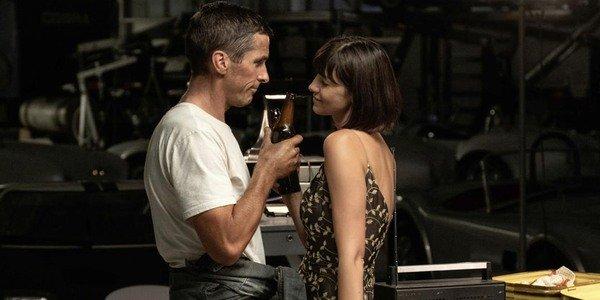 The rest of the movie, though, isn't nearly as surprising, which is where comparisons to Ron Howard's oeuvre unfortunately come into play. Mangold has certainly made a number of strong films over 20-plus years: Cop Land, Walk the Line, 3:10 to Yuma, The Wolverine and its superb companion piece Logan. Yet like Howard, Mangold isn't the most visually or structurally inventive of directors, and his works tend not to deviate from prescribed formula; even the most engaging ones come off as a little under-imagined and presentationally drab. (Mangold's style, akin to Howard's, is referred to as “meat and potatoes filmmaking” for a reason: It's satisfying and filling enough, but there's not much in the way of color or texture.) So while the Shelby/Miles relationship feels fresh, too much of Ford v Ferrari feels all too expected: Miles' domestic squabbles with his loving yet fretful wife (Caitriona Balfe); the hero worship of Miles' young son (Noah Jupe); the sneering odiousness of the Italian stereotypes, Ferrari included; the snake-in-the-grass presence of a senior Ford executive (Josh Lucas) even more noxious than the Italians; the music cues (by composers Marco Beltrami and Buck Sanders) telling us how to feel at every possible juncture; the unconvincing set pieces – principally the suburban brawl heavily promoted in the trailers – that seem distractingly inorganic; the rousing racetrack climax with every significant cast member either in attendance or watching it on TV. If, like me, you were unaware of the specifics regarding the winner of the 1966 24 Hours at Le Mans, Ford v Ferrari does boast a twist or two, and I wound up grateful for my ignorance. Yet even though there were occasionally unexpected developments, it still felt, for the movie's full two-and-a-half hours, as though I knew what was coming around every turn.

Your time spent at the film, however, does pass by breezily enough, in part because those exuberantly shot and edited racing sequences are truly gripping, and in larger part because there's always someone on-screen – usually several someones – whose presence you're thankful for. Balfe may be playing Hollywood's trillionth Long-Suffering Wife, but she's a funny, vital partner to Bale, and is given one sweetheart of a comic scene in which her pissed-off character's reckless driving, in her wood-paneled station wagon, terrifies even her pro-racer husband. Jupe, the child prodigy from A Quiet Place and Wonder who can clearly do anything, is watchful and touching, with one of the film's finest moments a brief, honest conversation – held after Ken nearly dies in a car fire – between this kid and his dad's trusted mechanic friend Phil, played by the eternally underrated character actor Ray McKinnon. Bernthal pulls off a tricky balance of commanding and subservient; Lucas, despite his one-note role, is amusingly hateful. And Letts, earning best-in-show honors as the tyrannical Ford, is in thunderously fine form, so steely and authoritative that his weepy reaction to a spin in his company's GT40 stands as one of the funniest, and most strangely moving, passages of the entire movie year. Ford v Ferrari may be too conventional to be truly great, but in its performers, it at least gives you more than enough reason to get up and go. 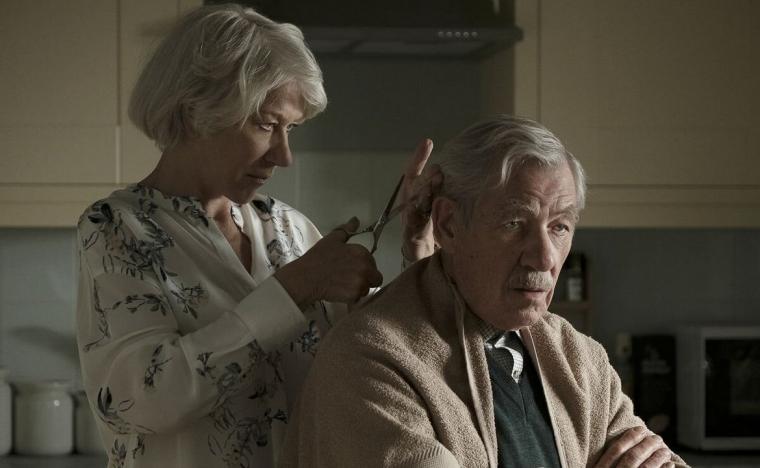 While Matt Damon and Christian Bale team up in Ford v Ferrari for the first time in their careers, director Bill Condon's thriller The Good Liar provides us with an even juicier match: the first screen partnership between Sir Ian McKellen and Dame Helen Mirren, who have acted together on-stage but never before in a movie. How on earth is that possible? And why on earth have they been paired in something so roundly disappointing? To be fair, screenwriter Jeffrey Hatcher's adaptation of Nicholas Searle's novel isn't altogether terrible, and for about an hour, its narrative that finds McKellen's career criminal attempting to bilk Mirren's widow out of her millions is good for some mild tension and, on McKellen's part, some enjoyable hamminess as he flits in and out of con-man personae. But everything about the film – the opening computer-dating montage, the leads' first in-person encounter, the slyness of Mirren's readings, even her placement above McKellen's in the credits – suggests that Mirren's Betty McLeish is hiding as many secrets as McKellen's Roy Courtnay. Consequently, there's almost nothing to do in Condon's latest but wait, and wait, for Roy to figure out what we've already suspected for ages, and when the big reveal finally comes, it arrives wrapped in so many layers of narrative convenience and spectacular contrivance that, despite the fun of the stars' happy slumming, it made me resentful toward the hour-and-a-half that preceded it. There are perks here and there: the continuing joys of Jim Carter's rumbling baritone; a quick, brutal subway killing; McKellen, aghast, at the unremitting beige-ness of Mirren's suburban home. Yet The Good Liar is still a dud. Condon's previous venture with McKellen was 2015's aging-sleuth mystery Mr. Holmes, and it would take Sherlock all of five seconds to glean that there was nothing here worth investigating.

I've read articles (okay, fine, headlines of articles) suggesting that Charlie's Angels died a quick death at the box office this past weekend because viewers have had it up to here with films in the #MeToo era – the recent Terminator: Dark Fate among them – that appear to be sacrificing entertainment for the self-serving promotion of feminist political agendas. I'm not gonna touch that one. But can't we all at least agree that writer/director Elizabeth Banks' franchise reboot might simply have died because it was too sickly to live? An action comedy to make the 2000 Charlie's Angels movie look savvy and ABC's 1976-81 jiggle-fest look freaking miraculous, this train wreck may have empowerment written all over it, filled as it is with leering, lecherous white men and ethnically diverse women more than ready to kick their asses. But given the the heavy (crap)load they're expected to haul, the clearly hard-working, occasionally diverting Kristen Stewart, Naomi Scott, and Ella Balinska are no Kate Jackson, Jaclyn Smith, and Farrah Fawcett-slash-Cheryl Ladd. Nor are they a Drew Barrymore, Cameron Diaz, and Lucy Liu. With this awful material, they aren't even a match for the fantasy B-team of Shelley Hack, Tanya Roberts, and David Doyle. And given that no one I know was even remotely considering going to this movie, it's inconceivable that anyone would think a Hollywood release this illogically plotted, incoherently staged, and drearily executed would be any kind of word-of-mouth hit with or without its recognizable title. This Charlie's Angels ends, inevitably, with the threat of sequels. Knowing there won't be any was the only true pleasure I got from it.