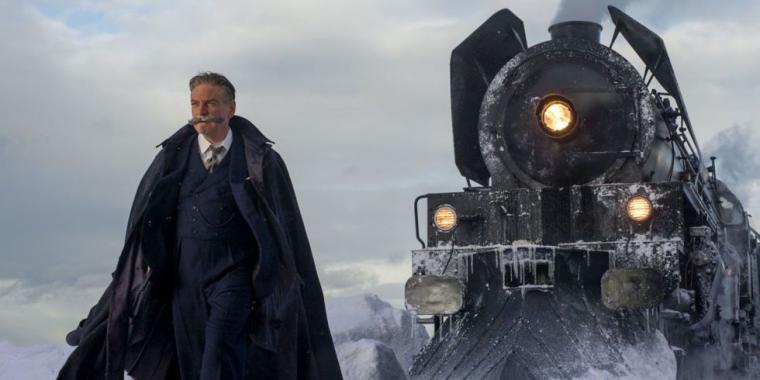 Kenneth Branagh in Murder on the Orient Express

MURDER ON THE ORIENT EXPRESS

As someone who's watched Sidney Lumet's Murder on the Orient Express so many times that it's become less “Whodunnit?” than “Why-Mike-do-you-continue-to-do-it?”, I resisted director/star Kenneth Branagh's Agatha Christie remake for as long as I possibly could. This opening scene is inessential and lame, I mentally scoffed. Branagh's detective is too sentimental. Did they really just turn Count Andrenyi into a 1930s kickboxer? What's with the off-putting CGI for the train? Are these people traveling on the Polar Express?

Slowly but surely, though, my numerous quibbles were mitigated by compliments. At least Judi Dench gets a great entrance. Okay, so Josh Gad is a significant improvement over Anthony Perkins. Hmmm ... having three suspects interrogated in one montage is really smart. Cole Porter on the soundtrack – nice. Just like in Evil Under the Sun!

And by the final half hour of Christie's legendary mystery – one with an equally legendary resolution that's maybe the genre's worst-kept secret – I had to admit I was having an utter blast. What a fantastic piece of misdirection! Whoa, I didn't see that gunshot coming! I can't believe this wrap-up that I know by heart is making me cry! Is that Michelle Pfeiffer singing over the end credits? Is it my birthday or something?!

Plenty of better movies have been released this year. But few of them, for my money, have been more delightful surprises than Branagh's Orient Express, a showcase for Christie's fastidious Belgian sleuth Hercule Poirot that initially seemed deeply unnecessary at best and tragically misguided at worst. (Beyond the 1934 novel and Lumet's 1974 classic, this story has been told in a 2001 American-TV version, a 2015 offering from Japan, and a 2010 BBC adaptation with David Suchet as Poirot.) Instead, we're treated to a powerful reminder of the joys of screen charisma and good old-fashioned professionalism, and one with just enough deviations from its source material to make the in-the-know among us wonder whether Branagh and screenwriter Michael Green will do the unthinkable and alter the “who” in this “whodunnit.” They don't, quite, yet the movie still kept me on my toes. 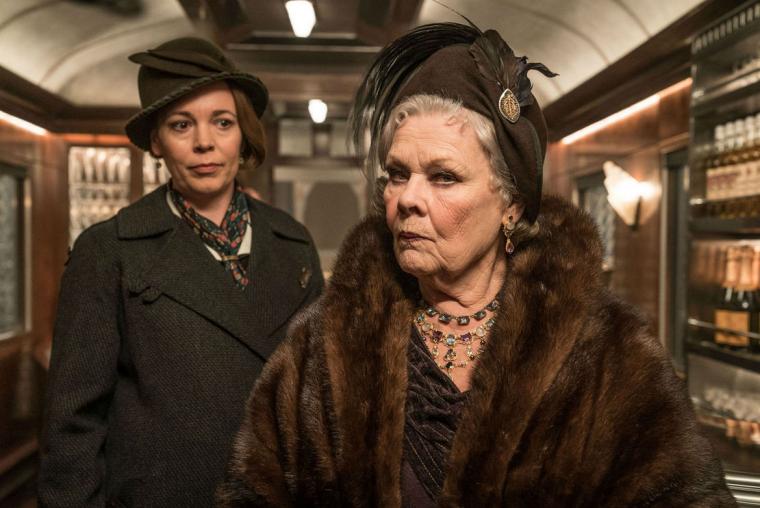 Like Lumet's more blithe, theatrical rendition, Branagh's tale of a killing aboard a European locomotive teeming with suspects boasts an “all-star cast.” That wasn't entirely true then and isn't entirely true now, given that significant roles are assumed by Tom Bateman, Lucy Boynton, Olivia Colman, Manuel Garcia-Rulfo, Marwan Kenzari, and Ukrainian ballet dancer Sergei Polunin – fine actors all, but not a star in the bunch. (Bateman, who's sensationally enjoyable, plays the only character beyond Poirot whose iron-clad alibi assures us of his innocence – meaning, of course, he could easily be guilty.) Regardless, there are names here to send film and theatre fans to their fainting couches: Oscar winners Dench and Penélope Cruz; Oscar nominees Pfeiffer, Willem Dafoe, and Johnny Depp; Tony winners Derek Jacobi and Leslie Odom Jr.; Tony nominee Gad; new Star Wars heroine Daisy Ridley. The least of them (that's probably Depp) is awfully entertaining. The best of them (that's probably Pfeiffer) is sublime. And all of them keep Christie's sturdy contraption chugging along with such wit and panache that even when the pacing stalls, there's always something – someone – wonderful to watch.

Not that Branagh, as director, provides less. While that CGI choo-choo is a considerable distraction, the glorious photography by Haris Zambarloukos adds richness and immediacy even to Poirot's many scenes of interrogation, with Branagh giving the cinematographer plenty of opportunities to showcase magnificent mountain vistas and vertiginous peaks. (In a change from the norm surely intended to blockbuster-ize this chamber piece, an avalanche causes the Orient Express to stall not on a flat expanse, but on a perilous wooden trestle, underscoring the notion that the killer couldn't have disembarked after the murder.) Branagh's staging, meanwhile, may boast the occasional half-realized idea – our God's-eye view of the compartment interiors is a clever yet under-utilized conceit – but there's still a more-than-solid amount of invention on display. The Last Supper tableau was a particularly arresting image, and Branagh's roving camera adds a giddy charge to otherwise unremarkable moments, especially when it rolls past the windows from the train's exterior, giving us brief shots of each estimable cast member looking mighty suspicious. (A similar bit near the end comes close to mirroring Lumet's peerless curtain-call finale.)

If you've seen the trailers, you may be wondering about the scene-stealing contributions of a co-star not yet mentioned: Poirot's mustache. It is every bit as grand, ostentatious, and ridiculous as previews made it appear. Yet in a film of major accomplishments, the biggest might be Branagh's refusal to be wholly buried by his prop hair, as he gives us a Poirot who's wise, dogged, sardonic, fatuous, and, eventually, tortured enough to keep us looking where we should be looking – into his eyes. Suchet's Poirot may have been more commanding, and Albert Finney's more eccentric, and Peter Ustinov's funnier. But Kenneth Branagh, to his enormous credit, absolutely belongs in their company. Toward the end, there's reference to Poirot having to leave for a case involving a death on the Nile. If this Murder on the Orient Express is indeed the start of a franchise, I'm all aboard. 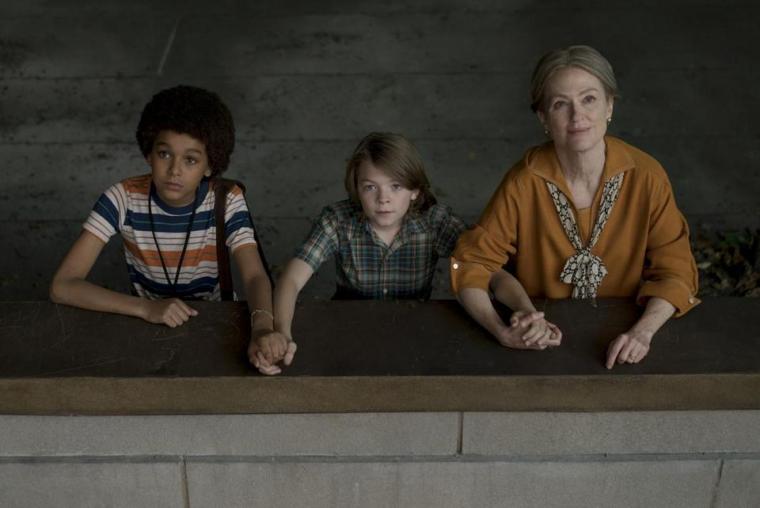 Last month, Julianne Moore played two roles in George Clooney's Suburbicon. This month, she's playing two roles in Todd Haynes' Wonderstruck. I'm 100-percent up for keeping this tradition alive for years to come, so long as Moore's movies are less like Suburbicon and more like Wonderstruck.

Currently playing at Iowa City's FilmScene, Haynes' latest, and one of his loveliest, is a bifurcated tale of two 12-year-olds: an unhappy deaf girl (Millicent Simmonds' Rose) growing up in 1927 New Jersey, and an unhappy, newly deaf boy (Oakes Fegley's Ben) growing up in 1977 Minnesota. Adapted from Brian Selznick's 2011 children's book with Selznick himself serving as screenwriter, the film toggles between Rose's and Ben's adventures as they travel to New York to seek out missing parents, and for most of its length, it casts an intoxicating spell. Rose's scenes, shot in black-and-white by Haynes' frequent cinematographer Edward Lachman, boast the delicate allure of a Lilian Gish silent film – albeit with a splendid Carter Burwell score punctuating the action – and the debuting Simmonds, with her expressive melancholy, suggests a Gish-level talent in the making. Ben's full-color scenes, meanwhile, have a kinetic, street-level vibrancy familiar from Sidney Lumet's iconic 1970s output – Murder on the Orient Express notwithstanding – and lead to exquisite moments in the Museum of Natural History, a setting we're encouraged to view with fresh, youthful awe. (We also get a flashback involving Ben's recently deceased mother, and with the five-minute role played by Michelle Williams, you can be assured that it's exquisite, too.)

Truth be told, I was hoping the film would be stronger. While Haynes and editor Affonso Gonçalves do a rather miraculous job of blending their storylines so that mysteries are subtly raised and effectively answered, and we slowly get to see how Rose's and Ben's individual sagas are linked, it's hard not to wish you were back in 1927 while you're spending time in 1977. That's partly because of the radiant Simmonds and the thrilling black-and-white, but also because, for all of the natural appeal of Oakes and his equally young co-star Jaden Michael, the 1977 sequences are too conventional in both writing and performance. (While the term “kids' movie” isn't always meant pejoratively, the practiced banter and banal dialogue of the Oakes/Michael sequences remind you that for all of Haynes' artistry, a kids' movie is effectively what you're watching.) And although Selznick's narrative concludes in a satisfying manner, the climactic reveal of the film's secrets is so talky, and goes on for so long, that it nearly nullifies the gorgeous diorama and picture-book visuals that Haynes attaches to it.

Still, the director provides enough filmmaking enchantment to handily make up for the magic that's missing elsewhere, at one point staging a chase to catch a windswept newspaper article with breathtaking panic and exhilaration. And as he creates a visual representation of Wonderstruck's central theme – one expressed on-screen in the Oscar Wilde quote “We are all in the gutter, but some of us are looking at the stars” – Haynes proves himself as comfortable in “kids' movie” mode as he was with the '50s melodrama of Far from Heaven, and the Bob Dylan considerations of I'm Not There., and the sprawling post-Depression of HBO's Mildred Pierce, and the lesbian romance of Carol. That's range to leave anyone wonderstruck. 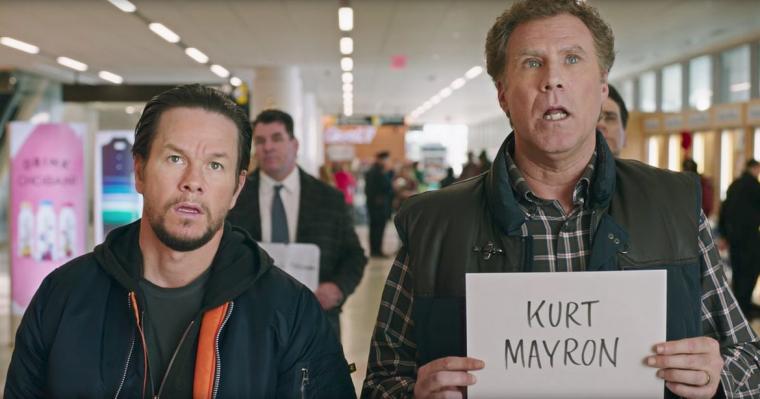 Among our current, seemingly never-ending list of national, political, and pop-cultural embarrassments and atrocities, the continued normalization of Mel Gibson probably doesn't crack the top 50. But that doesn't mean I got one lick of pleasure seeing him, in Daddy's Home Two, playing a devil-may-care man's man who teases son Mark Wahlberg and “co-dad” Will Ferrell for their wussiness and tells off-color jokes to his grandchildren and sneaks away with a woman 10 seconds after meeting her. (Gibson might have salvaged the blight of his casting if he were funny. He isn't.) Can't we scoot this guy into whatever black hole is housing Spacey and C.K. and every other celebrity we'd be better off without?

Then again, there's very little about director/co-writer Sean Anders' holiday comedy that did give me pleasure, with or without Mad Mel's participation. A slapdash farce for those who would've enjoyed A Bad Moms Christmas more if it were blander and didn't have all those women in it, the movie finds Wahlberg's and Ferrell's blended family enduring the visits of grandpas Gibson and John Lithgow, the latter an excitable sweetheart who greets his fully grown child with a reciprocated lip lock lasting three full seconds. All told, it's exactly what you think it'll be, so if you had fun at 2015's Daddy's Home, by all means enjoy yourselves.

For the rest of us, there's at least some cleverly staged slapstick involving a snow-blower and a string of Christmas lights, an early snipe at amateur school-pageant videographers, and John Cena – the one legitimately funny performer here, as he's the only one whose comic persona still boasts a modicum of surprise. (The movie's biggest shock, though, came at the very end, which took place in a Showcase Cinemas venue that had the exact same lobby architecture as the Davenport Cinemark theater – a former Showcase – in which I saw the movie.) Not to spoil things, but all ends happily in this endlessly dopey, treacly, going-through-the-motions “family” comedy, and it even ends the same way A Bad Moms Christmas did, with the stars' newfound-bestie parents heading off to enjoy a holiday weekend in Las Vegas. I didn't care much for either ABMC or Daddy's Home Two, but I would go, without much protest, to see Susan Sarandon, Christine Baranski, Cheryl Hines, Lithgow, and Gibson in whatever synergistic sequel is perhaps being concocted right about now. Maybe, by then, Gibson will have been replaced by Christopher Plummer.