Lord of the Fliers: “Voyagers,” “The Girl Who Believes in Miracles,” and “Tina” 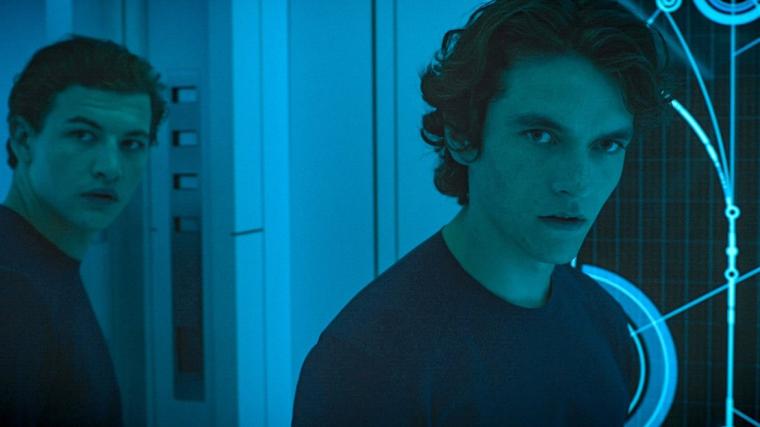 For better or worse, it always feels like the right time for a reinvention of Lord of the Flies, be it a faithful film adaptation or a TV series such as Lost or a random episode of The Simpsons. I was sincerely hoping for more, though, from writer/director Neil Burger's initially promising Voyagers, which puts a sci-fi spin on William Golding's tale of ruinous self-government yet doesn't have the nerve to follow through on its most intriguing and upsetting implications. While the film's PG-13 rating is already a hint that Burger's futuristic thriller won't emerge as the daring, nasty good time it keeps threatening to be, the problem isn't so much the movie's rating as it is its blandness. Thanks to Alien, we know the deal with screams. But as it turns out, in space, no one can hear you yawn, either.

Through a series of brisk opening scenes establishing 2063 Earth as uninhabitable, we learn that a faraway planet is able to sustain human life – it just takes 86 years to get there. Consequently, and with a kindly Colin Farrell acting as chaperone, a few dozen travelers are bred aboard a spacecraft and hurled into the unknown, their function to colonize a new world alongside their eventual children and grandchildren. When we meet these voyagers as young adults of 18 or so, they're a proficient crew of scientists and technicians as docile as replicants, the result of a mysterious blue liquid they consume in order to (unknowingly) quash their personalities and keep disruptive impulses in check. (Touching one another is forbidden, but these co-ed hotties are so robotically blank they're clearly not even touching themselves.)

Kids will be kids, though, and after Tye Sheridan's Christopher and Fionn Whitehead's Zac glean the truth about “the Blue,” they secretly refuse to stop drinking it, transforming within minutes into teens from anti-marijuana propaganda of the 1930s. They run, they rampage, they lust after the same girl (Lily-Rose Depp's Sela), and after their fellow travelers are convinced to also stop drugging themselves, it's a deep-space free-for-all, with doe-eyed Christopher and crazy-eyed Zac battling for control over the ship's fate, as well as the fate of all human existence. Oh yeah, and the ship might also be housing a murderous alien. Because the threat level clearly wasn't high enough. 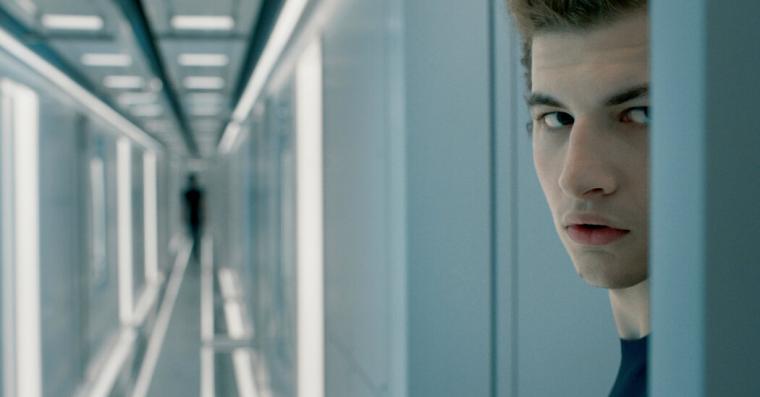 Sounds fun, right? It sure should be. Yet despite the zippy editing and cinematographer Enrique Chediak's pristine imagery, Voyagers winds up being the place where fun goes if not to die, then at least to take a really long nap. You can't help but be jazzed, in a Reefer Madness kind of way, right after Christopher and Zac first say no to the Blue. With their senses and hormones unleashed, the guys' manic grins are like blasts of pure id, and their frenzied sprints down spacecraft corridors and impromptu wrestling matches are loaded with feral intensity and hunger. (The inevitable gay-porn take on this material – Boyagers? – practically writes itself.) But the characters never develop. From the start, Christopher is unmistakably The Decent One and Zac The Loco One, and none of their fellow youths, post-Blue, are granted even half that much individuality. It's hard to feel for the future of the human race when Burger's wan dialogue and the actors' drearily rote portrayals aren't suggesting humanity in the first place.

Meanwhile, every time a fascinating narrative conceit is introduced, it's quickly abandoned. The decision to redesign Lord of the Flies' tragic Piggy as a skittish Black female (Chanté Adams' Phoebe) is front-loaded with thematic weight and potentially uncomfortable insight into the perils of tribalism, to say nothing of overt racism. Yet Burger seems far more interested in his film's boring “love triangle,” its generic us-versus-them fear-mongering, and its tediously familiar action sequences than he is in anything his sci-fi outing is actually suggesting. Shouldn't there be at least passing mention of the fact that the entire space crew is English-speaking, meaning that while humans may indeed thrive on another planet, our globalized differences that make Earth Earth will still be lost forever?

Unexpectedly, and beyond the engaging presences of Farrell and the world's most expressive eyebrows, the one element of Burger's movie that I unquestionably enjoyed turned out to be that unseen alien. Considering the subplot arose roughly 40 minutes into the film, it just seemed like too much: Was this Lord of the Flies wannabe now going to morph into Starship Troopers? But there turns out to be more genuine mystery in the creature's possible whereabouts – especially when it's inferred that the thing, as in John Carpenter's The Thing, is existing inside a human host – than there is in the rest of Voyagers, which keeps raising thorny questions about free will and group-think and our obligation to the future only to routinely ignore them. After 105 minutes of this enervating YA sci-fi, I felt as though I'd been ingesting the Blue. 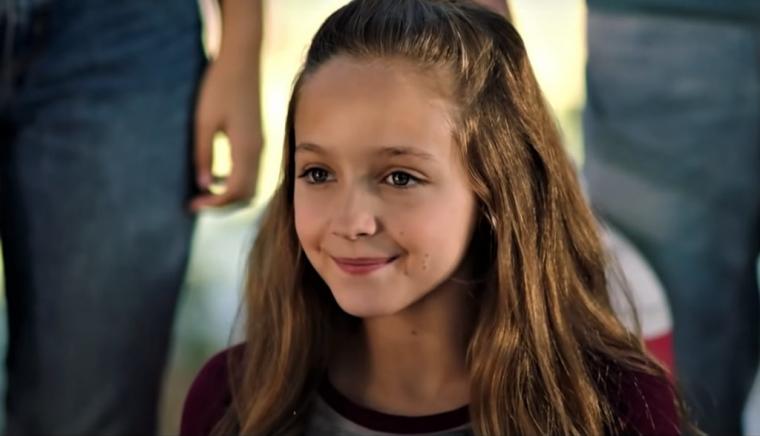 THE GIRL WHO BELIEVES IN MIRACLES

Over Easter weekend, horror fans were treated to the mild diversion of The Unholy, in which a teen girl has an encounter with the Virgin Mary – actually a malevolent demon in disguise – and begins healing people with her touch. That same weekend, fans of inspirational faith-based dramas were treated to The Girl Who Believes in Miracles, in which a precocious 10-year-old has a lakeside encounter with God – no disguise necessary – and not only heals people with her touch, but resurrects dead animals and begins drawing artworks that would inspire envy in Michelangelo. Lord, how I wish I had seen these releases as a double-feature! Unfortunately for me, though, I got around to the latter title later than I'd anticipated, and consequently find no point in comparing writer/director Rich Correll's Miracles with a horror show. To my surprise, and almost despite itself, the movie also doesn't deserve the comparison.

I'm not certain that even the most devout audiences will be completely in the tank for Correll's low-budget offering, given that its staunch refusal to explain an impossible storyline is basically employed as a bullying technique. If you don't buy the film's ludicrously sappy premise or the preposterous detours it inspires, Correll makes it clear that the problem is with you, or more specifically your belief system. (TGWBiM is like the cinematic equivalent of a fed-up parent responding to a child's repeated queries of “Why?” with a huffy “Because I said so!”) But happily, the longtime TV veteran knows how and where to move his camera, and he and co-screenwriter G.M. Mercier thankfully understand the necessity of humor in works of this type; the sit-complicated plan leading to the release of our hospitalized young heroine Sara (charming pro Austyn Johnson) may be laughable, but at least there are laughs. And even though the dialogue in The Girl Who Believes in Miracles is remedial at best and flabbergasting at worst, Correll did have the good sense to hire gifted people to deliver his and Mercier's messaging. Kevin Sorbo, a pro-faith mainstay of late, is solid and relatable as a skeptical doctor; the wonderful Peter Coyote lends his grizzled timbre to the role of Sara's crusty/lovable grandfather; and I couldn't have been happier to see Mira Sorvino again, even though the Oscar-winning performer and vocal #MeToo advocate can't help but carry with her, now, an aura of unrelenting sadness. That melancholic air works for Sorvino's role as Sara's frequently sobbing mother, but it's still heartbreaking that it has to exist at all. 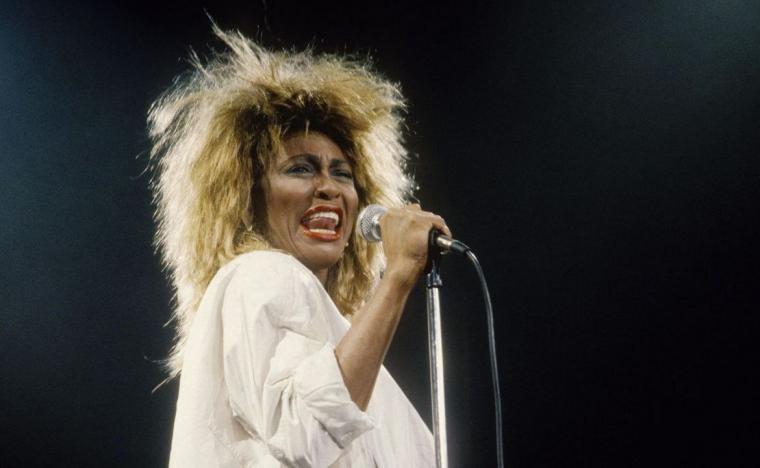 It may only be April, but it's entirely possible that the three most soulful, electrifying, unforgettable movie minutes of 2021 will wind up being roughly three decades old. Because near the very end of HBO Max's spectacular documentary Tina, directors Daniel Lindsay and T.J. Martin finally give us what we didn't even know we were waiting for: Tina Turner performing a fully staged concert rendition of the Beatles' “Help!” in its entirety. Glistening with sweat and alternately caressing the lyrics (“Help me if you can, I'm feeling down / And I do appreciate you being 'round”) and belting them out as though her life depended on them, the iconic rocker – one of the most gloriously physical and carnal of all time – is at her sultriest, but also her most tender and gracious and warm. By the song's finale, I was in tears.

It's hard to imagine any admirer of the now 81-year-old artist not getting weepy at some point in this extraordinary compilation of archival footage, one augmented by the retired Turner giving a moving, down-to-earth interview on the personal and professional ups and downs documented in her 1986 autobiography I, Tina (as well as, of course, the 1993 feature film What's Love Got to Do with It). If you're familiar with Turner's life story and career, and many of us likely feel that we are, it's all here in Lindsay's and Martin's film: the meteoric rise to stardom; the brutality at the hands of Ike; “Proud Mary” and “I Can't Stand the Rain” and “Private Dancer”; that effing dancing. Well-covered ground, to be sure. Yet hearing Turner reflect on these moments while we watch and listen to them proves nearly blindsiding, especially when she spends significant time explaining how publicly confronting her spousal abuse may have seemed empowering to the public, but just meant that she was forced to relive the trauma over and over every time her pain was subsequently brought up – and it was always, always brought up. Having finally reached a point of acceptance and forgiveness, Turner may never have been more beautiful than she is as an octogenarian in the powerful, sublimely entertaining Tina. For 1985's Mad Max: Beyond Thunderdome, she famously crooned “We Don't Need Another Hero.” But it turns out we did, and we do. We just need more of them to be Tina Turner.