Magic Wanderers: "Fantastic Beasts & Where to Find Them" and "Bleed for This" 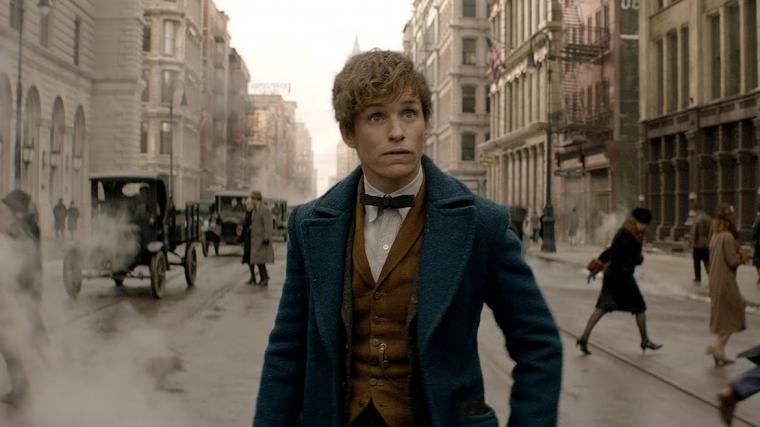 Eddie Redmayne in Fantastic Beasts & Where to Find Them

FANTASTIC BEASTS & WHERE TO FIND THEM

The best thing about Fantastic Beasts & Where to Find Them is that, as part one of screenwriter J.K. Rowling’s planned five-part movie series, it’ll likely be at least a half-dozen years before Hollywood begins rebooting the Harry Potter franchise. (And don’t give me that look; you know it’s gonna happen.)

But the second-best thing is that because this new tale of wizards and Muggles – called No-Majes here – isn’t based on a Rowling novel, instead taking its inspiration from the author’s 2001 tie-in “textbook,” director David Yates’ adventure doesn’t feel slavishly beholden to its source material the way the Harry Potters so often did. Both Rowling devotees and those of us who’ve never read her prose get to be surprised by the goings-on together, kind of like how George R.R. Martin fans and the Martin-ignorant alike could bond over this latest season of Game of Thrones. I just wish the surprises here were a bit more ... surprising. It’s not a Harry Potter, but in look and tone and narrative scheme, it’s exactly like one of Yates’ Harry Potters (he directed the final four of them), and so even if you’re enjoying yourself, the whole experience can feel a bit like yesterday’s news.

To Rowling’s and Yates’ credit, though, the results are definitely engaging, and as with most origin fables, they hint at even more thrilling times to come once the dreary business of all this explaining is behind us. Wasting no time, Fantastic Beasts hurls us headfirst into its heavily plotted terrain in Rowling’s 1926 New York – a time and place where persecuted wizards and witches are in hiding, and a Hogwarts alum (Eddie Redmayne’s Newt Scamander) arrives with a satchel full of unusual creatures in the hopes of attaining more. A few escape and begin causing Gremlins-like mayhem, and before long, all manner of additional characters arrive to complicate matters: the Magical Congress investigator (Katherine Waterston) who wants Newt deported; the No-Maj (Dan Fogler) whose suitcase gets accidentally, predictably, swapped with Newt’s; the fascistic security official (Colin Farrell) with obviously sinister motives; the vehement anti-witchcraft propagandist (Samantha Morton) straight out of The Crucible. Oh, and so very much more, including a political assassination, and escaped zoo animals, and a swirling mass of evil encased in a bubble, and a back-alley speakeasy staffed entirely by elves, and a demolition-packed action climax suggestive of both Ghostbusters and Doctor Strange ... . You can’t argue that Fantastic Beasts doesn’t give you plenty of bang for your buck, and it boasts loads of casually clever touches, particularly in regard to the fantastic beasts themselves: the winged purple snakes whose sizes expand and contract at will; the enormous, glow-in-the-dark hippo that passes beneath a frozen pond; the rats made of newspaper that literally tear each other to shreds. These and other delights – among them Yates’ blessedly swift pacing – help atone for more general detriments such as the movie’s expected reliance on verbal exposition and less expected lack of verbal wit, and for the slapstick rarely rising above Home Alone territory. They even almost compensate for our truly uninspiring pair of leads – Waterston endlessly anxious and teary-eyed even when situations don’t call for tears, and Redmayne’s tiresome little-boy-lost act making Newt perpetually mush-mouthed and tic-y and fey. (I’ll accept much of the blame for my displeasure with Redmayne, as nearly every time I see this serial over-actor on-screen, I want to punch him in the face.)

Still, the Jazz Age design of it all is gloriously rendered, and the supporting cast provides enormous fun, even if several of the most winning performers likely, and unfortunately, won’t be around for the (first) sequel. Now that Hollywood has stopped trying to turn him into Jack Black with doofus projects such as Balls of Fury and Good Luck Chuck, it’s a pleasure to see that a restrained Fogler is a much funnier one, and Farrell delivers no end of suave, insinuating menace. Morton’s grim-faced malevolence is truly terrifying, and as one of her abused young charges, the fiercely gifted Ezra Miller is as hypnotically unhinged as he was as the school shooter in We Need to Talk About Kevin. The motion-captured Ron Perlman is a hoot as a goblin barkeep; Jon Voight, looking more like Donald Trump by the day, suggests a potentially malevolent über-villain waiting in the wings. And finest of all is Alison Sudol as the clairvoyant-flapper sister of Waterston’s cop, so cheerful and buoyant and touching that she can’t be around nearly enough. Fantastic Beasts & Where to Find Them may traffic in magic, but Sudol reminds you that few things in life are quite as magical as a killer smile. A mediocre boxing movie to end all mediocre boxing movies, writer/director Ben Younger’s Bleed for This follows the late-’80s career of Vinny Pazienza, the professional boxer who held the world titles in lightweight, light-middleweight, and super-middleweight classes, and also won the latter of those titles months after suffering a severe spinal injury from which the man was never expected to recover. How, given those insane accomplishments, can a Pazienza bio-pic possibly be this dull?

Possibly because this one holds so little insight. We’re given a bunch of surface details about the fighter from Providence, Rhode Island: his pride in his middle-class background and his happily squabbling family; his lifelong refusal to drink liquor and take drugs; his equal affinity for blackjack and strip clubs. But all we learn about Pazienza’s feelings toward boxing is that he needs to box, full stop, and refuses to quit even when all of his relatives, friends, and doctors tell him to. This is an admirable, if potentially damaging-or-worse, attitude. It’s also a phenomenally uninteresting one for a triumph-of-the-underdog sports flick, because all we can do as viewers is watch Pazienza succeed, and, despite an admittedly major setback, succeed more and more; Younger’s film is like a prototypical Rocky training montage stretched out to two full hours.

In the leading role, the newly buff Miles Teller does well with Pazienza’s cockiness and bravado, and he’s exceptional when the guy is in physical pain. (Prepare to wince at the scene in which his doctor removes the screws from Pazienza’s halo brace without, at the patient’s request, giving him anesthesia. That boxer is a real man’s man – and, clearly, a masochist.) But Younger’s script barely gives Teller anything to play that would help reveal Pazienza’s interior, and most of the other characters appear to have no interiors, with Ciarán Hinds, as Vinny’s dad, doing most of his acting with his accent, and Katey Sagal almost an afterthought as Vinny’s blandly fretful mom. Only Aaron Eckhart, as trainer Kevin Rooney, has a colorful presence, and that has more to do with Eckhart’s physical transformation – protruding gut, nonexistent hairline, reedy voice – than with anything this fascinating sports figure is given to do. With its boxing scenes all filmed in the same impersonal, unimaginative manner, and the narrative progression profoundly unsurprising, Bleed for This would be the most generic boxing film of 2016 if it weren’t running neck-and-neck with August’s Roberto Durán saga Hands of Stone. Ironically, the climactic bout in this new film is the Las Vegas “Duel in the Desert” between Paziena and Durán, although I’m sorry to say that Edgar Ramírez does not again play the latter. Couldn’t someone have blended the boxers’ movies, let Teller square off against Ramírez, and saved us all a couple hours?