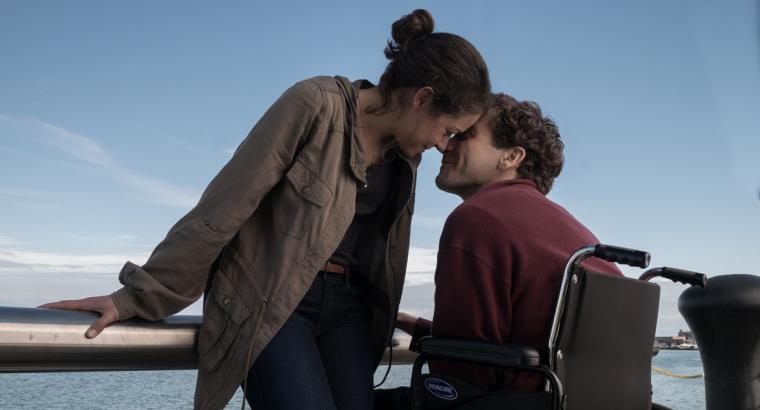 Like most people, I tend to really enjoy Jake Gyllenhaal on-screen. But as with his contemporary Leonardo DiCaprio, with whom I'd guess he routinely competes for roles, watch out when Gyllenhaal is in Oscar Bait mode, because hoo-boy are you bound to see some capitalized Acting – and I don't necessarily mean that as a compliment.

In movies ranging from Brothers to Nightcrawler to Southpaw, Gyllenhaal's histrionic, frequently unconvincing turns have been so emblazoned with “For Your Consideration” that his characters never registered as human. And in his early scenes, you may fear the same will happen in director David Gordon Green's Stronger, in which Gyllenhaal plays real-life double-amputee Jeff Bauman, who lost the bottom halves of his legs in the finish-line explosions during the 2013 Boston Marathon. With his excitability, thinned-out physique, heavy regional dialect, and seemingly lid-less popping eyes – plus a makeup job (or computer touch-up in post-production) making him look a good decade younger than his actual 36 years – Gyllenhaal starts this inspirational drama acting up a storm. To Green's and the actor's immense credit, though, it winds up downgraded to a persistent yet subtle rainfall, with the occasional gusts, when they hit, feeling intensely earned. It's an Oscar Bait role, but Gyllenhaal doesn't give an Oscar Bait performance – merely an exceptional, Oscar-deserving one.

If you've seen enough movies of Stronger's type, its tragedy/recovery/backslide/uplift arc won't be unfamiliar, nor will its cadre of genre-required supporting figures: sympathetic lover (Orphan Black's Tatiana Maslany), fretful mother (British character-actor legend Miranda Richardson), squabbling and comic-relief hangers-on (the great Clancy Brown and too many Massachusetts natives to count). But until the movie's final 15 minutes – with scenes of Bauman bettering himself passing so speedily that it feels like a solid half-hour has been left on the cutting-room floor – Green's latest is a sensationally fierce, surprisingly unsentimental achievement. Plenty of recent films set in Boston have had a high ol' time capitalizing on its citizens' blue-collar, salt-of-the-earth normalcy and “Who gives a fawk?!” uncouthness. Stronger, however, makes The Fighter look like Sense & Sensibility, because the characters here are continually, unquestionably, unflinchingly pissed: Bauman, incensed at the loss of his legs and having to act the hero for a fawning public; supportive ex-girlfriend Erin, hating Jeff for his selfishness and hating herself for hating him; Bauman's lush of a mom, who can't believe her son won't agree to a sit-down with Oprah Winfrey. (“I would've hung myself in the bathroom without Oprah.”) Green's film digs deeply at the ugly resentments that can fester after a catastrophic tragedy, and his performers aren't afraid to go for broke, and consequently come off as unlikable, in order for the truths of their characters' circumstances to reveal themselves. 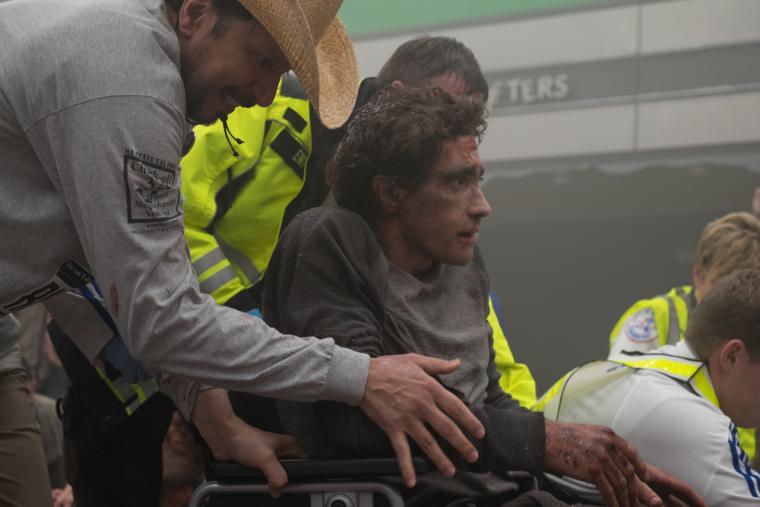 Yet with rare exceptions, Stronger isn't pushy about its themes. Major revelations – Bauman noticing one of the bombers on the street right before the explosion, doctors telling Bauman's family about the amputation – are handled with a glance as opposed to a stare. And Green's directing is quietly masterful in sequences that could've been played for maximum pathos, such as Erin opening Bauman's no-longer-necessary sock drawer, or the scene in which the young man's leg dressing is finally removed and he's torn between looking at his amputated limbs and looking away. (The framing, out-of-focus background, and Gyllenhaal's performance bring to mind that wrenching Brokeback Mountain moment in which Jack Twist wants, but refuses, to look at the naked Ennis Del Mar bathing mere feet away.) Not all of Green's film is this subtle, nor does it need to be; the vocally unrecognizable Richardson, who appears to be entering her Geraldine Page period, is stunning precisely because of her fearless lack of restraint. Taken overall, though, Green's work and John Pollono's topnotch, unapologetically profane script – based on Bauman's autobiography – have turned the sort of film you feel you've seen dozens of times into something that instead feels refreshingly new.

Green and Pollono aren't afraid, for instance, to merge harrowing drama with slapstick comedy; when Bauman takes a painful tumble off a toilet seat, it leads, unexpectedly and rather joyously, into a hilarious gag about the reason many young men make strange noises behind locked bathroom doors. As conventional as the film can get, Green's decision to largely eschew manipulative background music at times that would seem to cry for it can only be applauded – particularly when they showcase Maslany, whose superbly rendered heartache and confusion wholly register without accompanying training wheels. And through it all, Gyllenhaal, performing magical variants on differing states of shock, gives each scene just what it requires in terms of delicacy and/or the intentional lack thereof, whether he's silently struggling with undiagnosed PTSD or drunkenly driving through residential Boston with an even-more-inebriated friend operating the gas and brakes. Stronger is devastating yet wildly satisfying – seemingly prototypical Oscar Bait that can't help but hook you.

Trading in the nightmares of having your social-media page hacked and losing all your Facebook pals, Friend Request comes jam-packed with morals for its targeted youth demographic: Don't blindly befriend that creepy girl in the hoodie who makes experimental shorts resembling The Ring. Don't lie about where you are when photos of you are bound to be posted online. Turn off your eff-ing computer once in a while. But viewed strictly as a horror film, director Simon Verhoeven's outing also has another, less anticipated message: Don't presume that low-rent scare flicks – even those that, like Verhoeven's, were completed three-and-a-half years prior to their release – are awful just because they can't possibly be good.

No one can, or at least should, be surprised that the movie isn't very good. Its über-silly premise involving a teen witch who, via supernatural yet cyber-friendly means, kills long after her own suicide is rife with cheap jumps and jolts, plus the standard, eternally misguided attempt to explain the unexplainable through specious historical events found in a Google search. (The film also makes the mistake of trying to grow a funny bone too late in the game when a pair of ineffectual cops, 20 minutes before the end credits, suddenly turn into Fargo-esque goofballs.) Yet even though Friend Request is crap, it appears to be crap made by a genuine talent. While the results aren't terribly spooky, Verhoeven elicits mostly excellent portrayals from his cast, particularly empathetic lead Alycia Debnam-Carey, the intense Connor Paolo, and Liesl Ahlers, whose victimized tormentor Marina Mills resembles a pale, deranged Claire Danes. He's canny about upending fright-film clichés involving the Opened Refrigerator Door and Fogged-Up Bathroom Mirror, and pulls off bits of enjoyably disturbing imagery, principally the immobile laptop reflections of the soon-to-be-deceased. And even though the film would've benefited from laughs, Verhoeven clearly knows how to evince nervous titters, with the social-media query “Are you sure you want to unfriend Marina Mills?” funny/scary for the italics seen only in our heads. Verhoeven's movie may not be good, but it's hardly as dumb as you'd expect, and scores points for many of its sly touches, such as the complexions of the movie's kids worsening with every addition to the body count. With travails such as these, who has time for Clearasil?