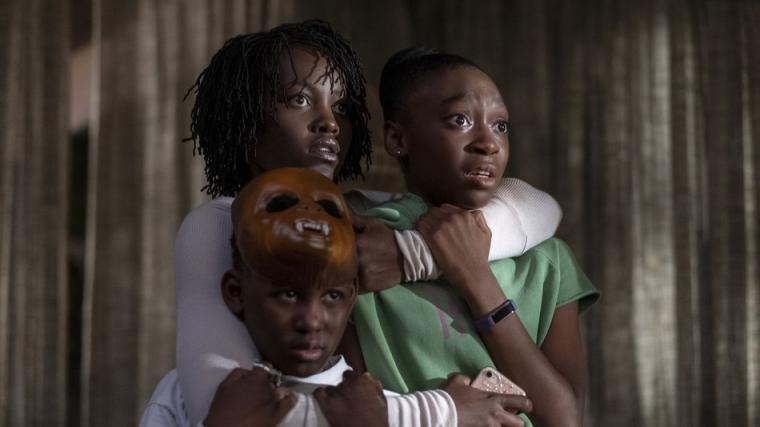 Lupita Nyong'o, Evan Alex, and Shahadi Wright Joseph in Us

“The isty-bitsy spider climbed up the water spout.

Down came the rain and washed the spider out.

Out came the sun and dried up all the rain.

And the itsy-bitsy spider climbed up the spout again.”

In the first minutes of the Jordan Peele thriller Us, a little girl whistles the tune to that age-old nursery rhyme that most of us have known since before we could talk. But when was the last time you really listened to its lyrics? Peele's latest gets a lot of mileage out of putting familiar songs in comic-horror contexts, among them the Beach Boys' “Good Vibrations,” N.W.A.'s “F--- Tha Police,” and, most memorably, Luniz's “I Got 5 on It,” which no viewers of this film will likely hear again in quite the same way. Yet it's “The Itsy-Bitsy Spider,” of all ditties, that might prove the most resonant – not because of Peele's audacity in employing a familiar childhood melody for sing-song-y chills (plenty of fright flicks do that), but because the lyrics might be the most succinct possible synopsis of Peele's fiercely enjoyable, occasionally vexing, thoroughly enthralling creation.

Have I already said too much? The Spoiler Police, of course, are always out in force. But they truly deserve to be for Peele's rabidly awaited follow-up to Get Out, the Oscar-winning horror satire that's about as close to perfect as modern movies get. Much as we may have hoped otherwise, there was really no way for the director/writer/producer's new offering to compete, and to be sure, Peele's sophomore effort isn't nearly as tightly structured, thematically precise, or insanely quotable as his 2017 debut feature. Yet while it's a less satisfying experience overall, I found Us both scarier and more adventurous than Get Out, and so rife with call-backs and references and ideas – maybe too many for the film's ultimate good – that repeat viewings feel almost giddily compulsory.

Opening on a TV commercial promoting Hands Across America – the 1986 publicity campaign designed to raise funds to fight poverty and homelessness – Us quickly scoots its action to a beachfront in Santa Cruz, California, where young Adelaide (a grave, empathetic Madison Curry) walks on the boardwalk with her squabbling parents. While Mom visits the restroom and Dad loses himself in a game of Whac-a-Mole, Adelaide, looking hypnotized in her “Thriller” T-shirt, wanders off, eventually entering a seemingly abandoned carnival attraction advertising itself as a place to “Find Yourself.” Between Peele's subtly eerie framing and the stalker cinematography courtesy of It Follows lenser Mike Giolakis, this prelude readies us for some serious terror. But despite a couple of jump scares inside the attraction's hall of mirrors, the most traumatizing horror is suggested only through Adelaide's wide-eyed, open-mouthed stare – an expression that genre fans will instantly recognize as the same one Danny Torrance had when envisioning the murdered twins and bleeding elevator in Stanley Kubrick's The Shining. 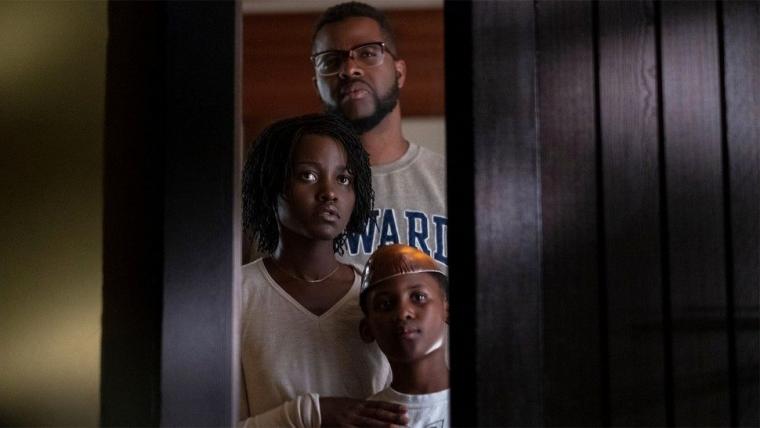 Cut to 33 years later. Adelaide (now played by Lupita Nyong'o) appears happy in upper-middle-class domesticity with her lovable-goof husband Gabe Wilson (Winston Duke), her predictably phone-obsessed teen daughter Zora (Shahadi Wright Joseph), and her pre-teen son Jason (Evan Alex), the latter unmistakably – and given the summer-vacation setting, unseasonably – fond of his Halloween mask. Not long after landing at their rental home in California, Gabe announces plans for them all to visit the beach – the same Santa Cruz locale where young Adelaide had her fateful hall-of-mirrors encounter. With assurances that they'll be back before dark, the newly nervous, edgy Adelaide reluctantly agrees to go, enduring mild annoyance with the arrival of Gabe's wealthy friends the Tylers (Elisabeth Moss and Tim Heidecker) and more significant freak-outs in a series of wildly improbable coincidences and Jason's momentary disappearance. But the Wilsons do make it home safely, and everyone appears ready to contentedly call it a night when Jason enters his parents' room with the classic horror-movie pronouncement “There's a family in our driveway.” There certainly is: a family of four clad in red jumpsuits, holding hands, and looking like shadowy mirror images of the Wilsons. That's when the scissors come out.

That's also where my spoiler-free plot description will end. But if you've seen Us' enticing trailer, it won't shock you to learn that these uninvited guests are indeed doppelgängers of our heroes (played by the same actors) who have shown up for purposes unknown … although those pairs of gleaming gold scissors brandished by each Bizarro-world Wilson do offer a clue. And what consequently results is kind of like what you'd get if a home-invasion thriller mated with a zombie-apocalypse thriller and gave birth to a subterranean Matrix, with Sigmund Freud and Lewis Carroll serving as godparents and Darren Aronofsky performing the baptism.

Jordan Peele, however, is hardly a mere excavationist. He may reference loads of other works, and The Shining, in particular, gets so many shout-outs that the film is practically a companion piece to the peerless rabbit-hole documentary Room 237. Yet Peele's vision is absolutely a singular one, and in its far messier (and bloodier) way, Us says as much about class and systemic oppression in America as Get Out said about race. Beginning with that televised promotion for Hands Across America – followed immediately by the reflected image of Adelaide intently focused on her TV screen – Peele reminds you of the eternal disparity between the haves and the have-nots, first expressed comedically in Gabe's one-upmanship with the Tylers, and then horrifically with the appearance of the Wilsons' mysterious lookalikes. Us is both figuratively and almost literally about that torturous climb up the water spout, and while your character allegiances are never in doubt, you're also forced, in the end, to acknowledge just who and what you've been rooting for and against during the whole of the movie's two-hour running length. But I really shouldn't get into that. 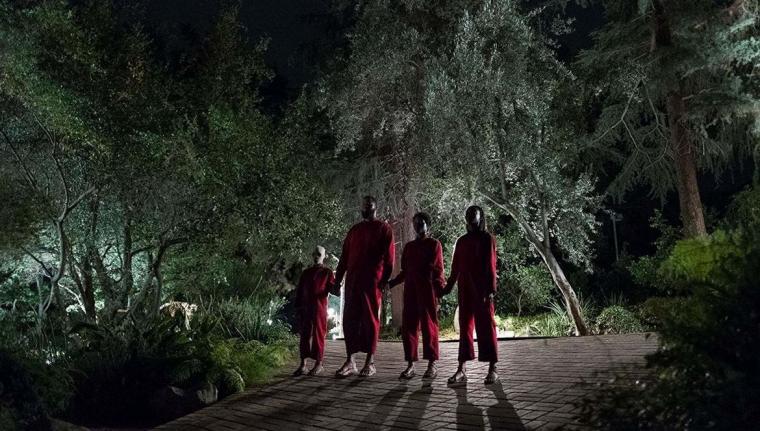 So what can I say without saying too much this early in the film's run?

I suppose I can, and should, make clear that after only one viewing, Peele's themes don't appear to be wholly in-sync with his storytelling ability. While nearly all of his scenes work on an individual basis, they feel less naturally tethered – a word I'm using intentionally – to the ultimate Big Picture than they did in Get Out, and the attack sequences quickly grow repetitive. It's as if the sharp, hair-raising final minutes of Peele's previous film, here, are being stretched out to a full half hour. While there are enormous laughs, with the flare-gun and Home Alone punchlines particularly riotous, they tend to stick out as mood-lightening gut-busters without feeling completely connected to the characters' situations. (I loved the family's hilarious mini-squabble as they compared notes over who was keeping the clan safest, but would that argument really be happening at that precise moment in their turmoil?) And if you're the sort of viewer who demands real-life logic even from entertainments with malleable-at-best connections to the real world, Us may well drive you batty. My brother, a man practically Spock-like in his devotion to reason (and I say that with love), engaged me in a 30-minute debate over the flaws in Peele's narrative construction, all of which I generally agreed with, and none of which bothered me that much.

But I guess the most important thing for me to say regarding Peele's wildly ambitious, occasionally overwrought second feature is “See it.” See it for its off-putting fringe touches that lead to immediate, giggly questions: Why does Adelaide's father, while playing Whac-a-Mole, keep smacking the same mole from the same hole over and over? Why is that homeless man holding a cardboard sign imprinted with “Jeremiah 11:11”, the same numbers overheard in a baseball-score recap and displayed on one of the Wilsons' clocks? (Per the King James Bible: “Therefore thus saith the Lord, Behold, I will bring evil upon them, which they shall not be able to escape; and though they shall cry unto me, I will not hearken unto them.”) See it for its plethora of in-jokes, with that 1986 opener boasting visible video tapes of The Man with Two Brains, The Goonies, and, my personal favorite, C.H.U.D.

See it for the lingering dread and Peele's compositionally astute staging. See it for composer Michael Abels' sinister score and the visual nods to everything from Black Swan to Sisters to Michael Haneke's Funny Games. (See it for the positioning of deceased twin girls in a hallway: Seriously – so much Shining in this thing!) See it for the wondrous young performers Curry, Joseph, and Alex, and for Moss' dreamily nightmarish grin while applying lip gloss, and for Duke, the new cinematic standard-bearer for adorably nerdy dads.

And see it, perhaps first and foremost, for Lupita Nyong'o, whose extraordinary portrayal of damaged vulnerability mixed with furious maternal wrath, as Adelaide, is complemented and expanded by her turn as Adelaide's jumpsuit-wearing other – a figure whose unblinking eyes appear to see everything yet nothing, and whose strangled, ellipsis-filled readings suggest a lifetime of choked rage finally made verbal. It's an almost absurdly brilliant melding of technique and bone-deep emotionalism, and the one aspect of Us, among many, that I'm most eager to revisit. Peele's latest is admittedly problematic, and I still can't wait to climb up its spout again.