Memories Light the Coroners of His Mind: “Reminiscence,” “The Night House,” and “The Protégé” 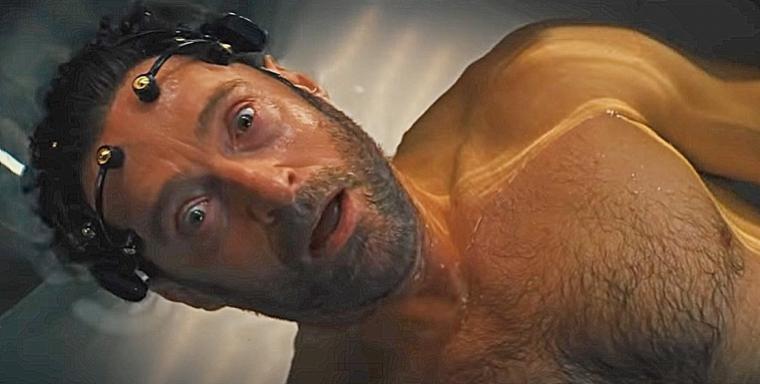 I'd somehow never noticed prior to my weekend viewing of Reminiscence, but whenever Hugh Jackman grimaces or simply frowns, his expression becomes nearly indistinguishable from that cartoon symbol of an upside-down smiley face. His mouth forms a perfect half-circle with its points aiming directly downward, and when the guy's eyes brim with accompanying tears, the effect is startlingly moving; Jackman looks like a five-year-old whose ice-cream cone fell onto the sidewalk and who is now moments away from bawling. Affecting though the sight is, I wish I could say that writer/director Lisa Joy's futuristic noir gave Jackman opportunities to not frown – to access the performer's lighthearted, effortlessly winning side that we rarely get to see outside of him playing The Greatest Showman on-screen or at awards shows. Alas, it doesn't. But at least this intricately plotted, visually arresting crime thriller gives its audiences a few legitimate reasons to grin.

Along with her husband Jonathan Nolan, Joy co-created HBO's sci-fi series Westworld, and if its title weren't already used for a notorious Kevin Costner vehicle, her new project could easily have been called Waterworld. Set in an unspecified future after rising ocean levels have caused Miami to be largely submerged and rising temperatures have made outdoor daytime activity unbearable, Reminiscence finds our society so starved for indoor amusement that nostalgia has become our de facto entertainment. With the aid of his assistant Emily (Thandiwe – formerly Thandie – Newton), Jackman's Nick Bannister runs a Florida operation in which, for a fee, customers can float in aquatic sensory-deprivation chambers and relive experiences from their pasts, whether their goal is to revisit old romances or merely pinpoint where they left their keys.

That latter mundane task is the purported reason that nightclub chanteuse Mae (Rebecca Ferguson) glides into Nick's shabby office, and in the manner of all noir worth its salt, it only takes seconds for our grouchy, gruff-voiced hero to fall helplessly and hopelessly in love. You'd think the arrival of this femme fatale would be enough to lift Nick's spirits, or at least add some upbeat notes to his continually mournful narration. Yet even after he and Mae become an official item, Nick doesn't smile, and he really doesn't after we learn that the mysterious Mae has gone missing, and that Nick has spent months in his memory-recreating tub searching for answers to where she might be and who may have caused her disappearance.

As updated noir concepts go, Reminiscence's is perfectly solid, despite boasting obvious echoes of everything from The Maltese Falcon to Chinatown to Blade Runner. And even the much-too-muchness of the storyline – with the twisty plot eventually involving a narcotics ring, an abducted child, and a heavily scarred henchman (Cliff Curtis) – mostly works in the film's favor, as there's such a plethora of goings-on that you barely have time to register how unconvincing or downright silly most of them are. (Nick and Emily are able to see holographic representations of what their submerged clients see, but the images are shot to look like traditional movie scenes, and aren't presented as first-person accounts the way they'd kind of have to be. I kept wanting to ask those clients, “So who's your brain's cinematographer? Because that memory's lighting is gorgeous.”) 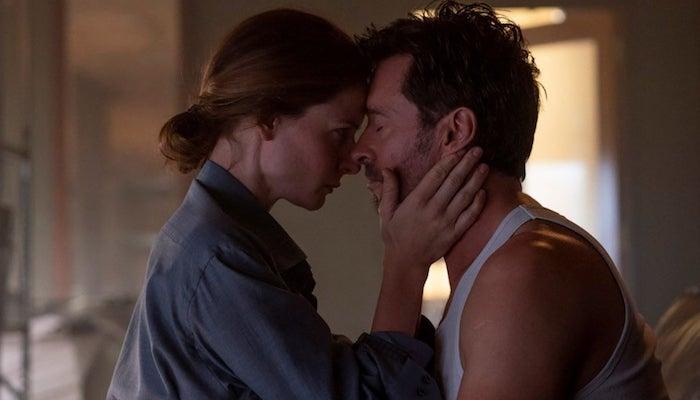 The puzzle pieces, however, never quite fit the way you need them to – the narrative detours feel solely like detours – and there are a number of unfortunate sequences, particularly the sojourn into action-blockbuster terrain that's briefly scored to “Tainted Love” and suggests that Joy's film has momentarily turned into a Kingsman sequel. But Reminiscence's biggest detriment is the complete lack of emotional and romantic rapport between former Greatest Showman co-stars Jackman and Ferguson, whose relationship is the engine with which this noir train runs. While she's a lovely performer who's frequently excellent on-screen, Ferguson doesn't exude the Barbara Stanwyck/Kathleen Turner heat required for Jackman to be a believable dupe so single-minded in his devotion that he'll trash his entire life for her cause. (The deck seems unfairly stacked against Ferguson when, in Mae's lounge act, she's outfitted in a striking red dress that can't help but recall Michelle Pfeiffer in The Fabulous Baker Boys, given that Ferguson clearly doesn't possess Pfeiffer-ian confidence with a torch song.) And although there are several references to the Orpheus-and-Eurydice myth sprinkled throughout, including a solid wink at the tale's unhappily-ever-after finale right before the end credits roll, those two at least had passion for one another. Ferguson and Jackman, by contrast, just appear bored.

Happily, though, Joy's feature-length directorial debut gives us plenty to look at, and does a more-than-decent job of employing the visuals for thematic purpose. I wish the idea had been more fully tied to the plotting, but it was a kick to see monetary status reflected in the relative depths of water in Miami and New Orleans, with poverty-stricken areas fully submerged, middle-class neighborhood streets about six-inches flooded, and wealthy communities completely dry. I appreciated that the memory-enhancing chambers were also used to suss out clues in criminal investigations. Many of Joy's images, such as Nick following a piano as it descends into a flooded ballroom, have an undeniable, poetic lushness.

And the writer/director clearly knows her '40s noir, with Newton delivering ideal sass and grit as a prototypical Gal Friday and Jackman, recreating his Wolverine look in a sleeveless T, growling hard-boiled voice-over lines such as “To find Mae, I had to go to Hell itself.” (The place he winds up going doesn't look noticeably worse than any other locale in the film, but again, the Orpheus/Eurydice reference was appreciated.) It's hardly a complete success, but Reminiscence is still worth a look, especially considering, in addition to the cineplex, you can readily look at it on HBO Max over the next month. Just don't expect, after a few days, that you'll find yourself with much to reminisce about. 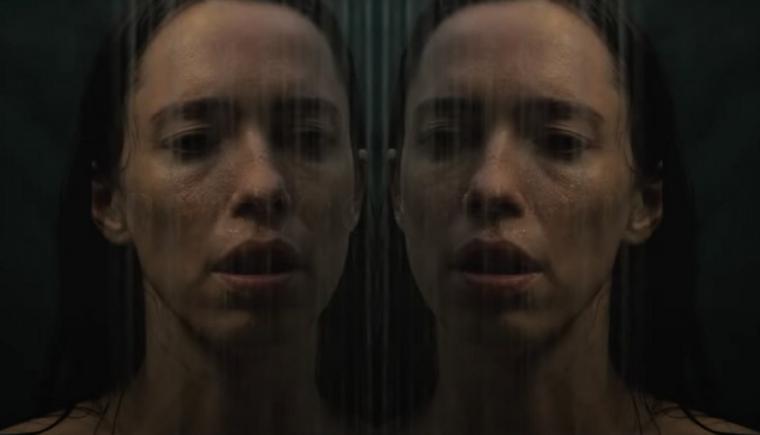 Rebecca Hall is such a thunderously magnetic performer – so present, so intelligent, so alert to nuance and subtext – that she's managed to make vivid impressions even in works such as Iron Man 3 and Transcendence and Frost/Nixon, where the filmmakers clearly didn't know what to do with all that energy and talent. (I blame my inability to remember her in this past spring's Godzilla vs. Kong not on Hall, but on my standard monster-blockbuster narcolepsy.) So whenever she's given the chance to really stand out, as in Vicky Cristina Barcelona and The Gift and Hall's ravaged 2016 showcase Christine, the results are consistently riveting even when the movies themselves don't quite match the fervor she brings to them.

Such is the case with director David Bruckner's fright film The Night House, which might easily have been standard haunted-house stuff without Hall's singular blend of ferocity and emotional nakedness. The movie casts the performer as a high-school teacher recently traumatized by the suicide of her husband (Evan Jonigkeit), with the woman increasingly convinced that her dead spouse is sending messages from the beyond, and perhaps even re-establishing residence in their lakeside home. Bruckner proves fabulously adept at slow-building the suspense so the eventual shock effects are genuinely scary, and even though Ben Collins' and Luke Piotrowski's original screenplay goes off on too many metaphysical tangents by the end, the narrative delivers a frank, upsetting exploration into how self-enforced isolation and buried grief can lead to potential madness. There are also first-rate portrayals by Sarah Goldberg as a kindly co-worker and Vondie Curtis-Hall as a friendly neighbor, with Jonigkeit protracting the creepy vibe he evinced in that superb prelude to The Empty Man, and Bruckner's release, while slight, is quite effective as low-rent psychological horror.

Its star, though, brings it closer to art. Whether sarcastically berating a student's clueless parent or drunkenly demanding that her house's unseen guest reveal it/himself, Hall is like an exposed nerve brought to life, teetering so close to ruin that she's somehow even more captivating, and terrifying, when she spontaneously laughs and says, with an unconvincing grin, “I'm fine.” Playing this ambulatory nervous breakdown with a serious destructive streak, Hall is in just about every frame of The Night House, and singlehandedly turns satisfying genre entertainment into a performance-based triumph. It belongs in a Hall of Fame. Hopefully it leads to more fame for Hall. 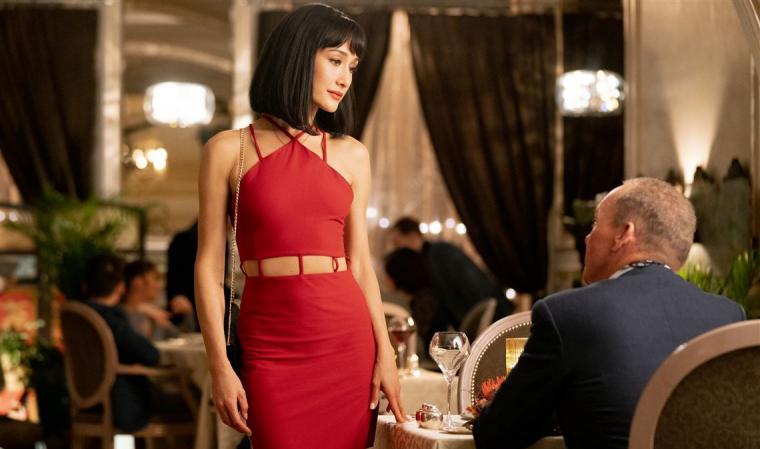 Don't let the title's accented letters fool you: The Protégé isn't high-minded. I'm not convinced there was a mind at work at all in this thing. But as retrograde action nonsense goes, I've certainly seen worse, and the cast makes it modestly enjoyable. In director Martin Campbell's vicious thriller, a contract killer takes in a Vietnamese orphan in 1991, teaches her the family business, and 30 years later, the now-grown London resident goes after the men presumably responsible for her mentor's killer. In other words, barring a few cultural and gender details, you've probably seen this movie before, and a few times before that.

Still, Maggie Q, looking impossibly elegant, is a reliably fierce ass-kicker, and she and Michael Keaton appear to be having a blast together whether flirting in a chic restaurant or beating the crap out of one another (right before having sex) in a slightly more chic hotel suite. The inevitable Samuel L. Jackson has a couple of agreeable scenes as Maggie Q's father figure, while Robert Patrick, as a burly biker, is more laid-back than we're used to seeing him; he could be auditioning for the Sam Elliott role in a proposed sequel to Mask. And Campbell, an action veteran whose credits range from 2006's admirable Casino Royale to 2011's loathsome Green Lantern, at least knows how to position his camera so we get plenty of bang for the stunt team's bucks. The rare case of a Hollywood outing that's endlessly stupid yet, vexingly, also perfectly fine, this one delivers exactly what it's supposed to, even though the only time I was actively engaged was when a drive-by resulted in the total annihilation of Maggie Q's day-job venue: a West End rare-books store that's ultimately shredded beyond repair. I know movies like The Protégé are the enemy of literature, but for Heaven's sake, what did books ever do to deserve this?