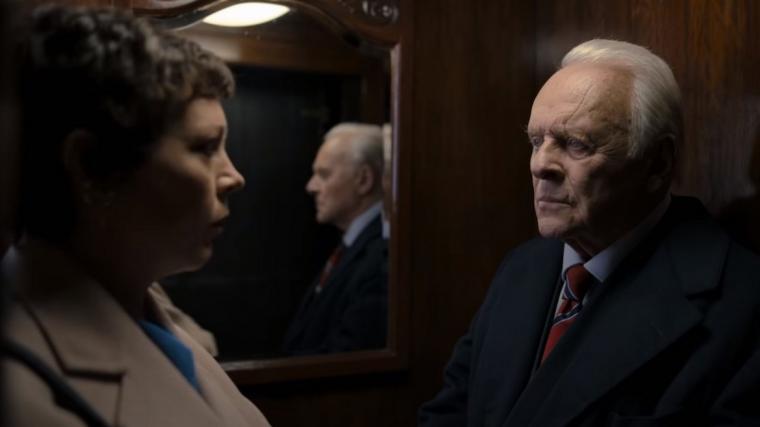 Olivia Colman and Anthony Hopkins in The Father

An adaptation of his Tony Award-winning stage drama, director/co-screenwriter Florian Zeller's The Father casts Anthony Hopkins as an octogenarian suffering from dementia, and there's no point to me even trying to bury the lede: I bawled like a baby at this thing.

Part of my reaction, no doubt, stems from the fact that my own octogenarian father suffers from dementia. And if you, too, love someone who's slowly fading away, you're going to want to see Zeller's movie either presently at the cineplex or eventually at home – though “want” may not be the right word for it. Unlike similarly themed titles such as Still Alice and Away from Her, The Father doesn't give us an outsider's perspective on its protagonist's plight. Rather, this supremely clever, emotional, deeply disorienting film puts us directly into the mind of someone whose own mind is unraveling, and I left the experience feeling as though I understood dementia – understood my dad these days – in ways I never expected from a work of fiction.

With the first scene of Zeller's feature-film debut, you may wrongly presume you know where the story is heading. Hopkins' 83-year-old Anthony, in his spacious London flat, is visited by his middle-aged daughter Anne (Olivia Colman), who has just learned that her father's caretaker, the most recent of three, has quit over his improper treatment of her. (Anthony accused the woman of stealing his watch, an accessory he eventually finds in his hiding place under the bathtub.) Anthony's bad behavior can't continue, Anne patiently explains, because she's moving to Paris to live with her new beau – a move that Anthony considers a particularly heartless form of abandonment. Anne leaves dispirited and guilty, and we're consequently primed to expect a familial, and familiar, tug-of-war in which father and daughter gradually come to terms with Anthony's dementia and eventually find some measures of acceptance and peace. That's absolutely not what happens.

When next we see Anthony, in what feels like the next day, he's in the kitchen putting away groceries when he hears a noise in the living room. He enters to find a man (Mark Gatiss) contentedly reading the newspaper – a man who (re?)introduces himself as Anne's husband Paul. You register the immediate confusion in Anthony's eyes: Isn't Anne's husband named James? Didn't they divorce years ago? The unrecognizable Paul goes on to tell (remind?) his father-in-law that Anthony is actually a guest in their flat, and that he's been living there ever since his caretaker quit weeks ago. None of this makes any sense to Anthony – or to us, really – and Paul finally calls Anne, who's shopping around the corner, to tell her to come home immediately. To the elder man's relief, she does. And when his daughter walks in the door, Anthony's expression switches from bewilderment to outright horror, because Anne is no longer played by Olivia Colman. She's played by Olivia Williams, and has no memory of her prior conversation with her dad. Paris? No, she's not moving. Divorced? No, they're still together. Anthony's flat? No, its hers and Paul's. 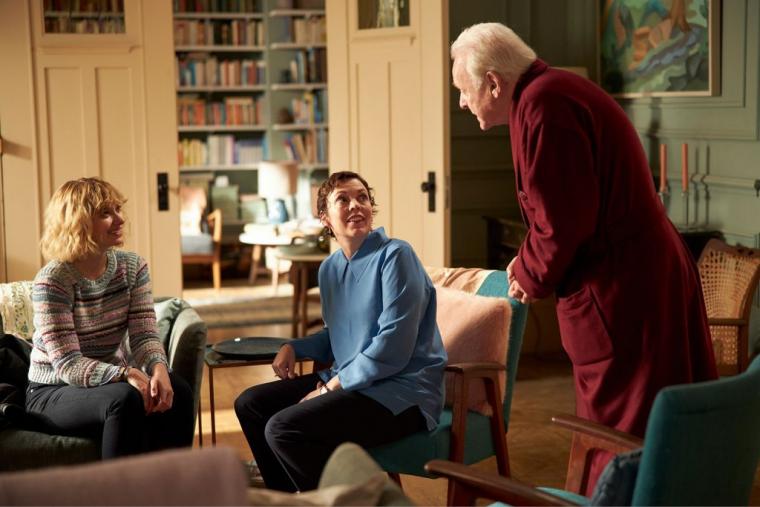 All this constitutes maybe the first 20 minutes of Zeller's 95-minute film, and the dislocation only intensifies from there. Colman returns to the role of Anne, but her husband is now portrayed by Rufus Sewell, who's a far pricklier figure than Gatiss' more courtly Paul. A new caretaker, Imogen Poots' Laura, shows up, but her evident sweetness is undercut, for Anthony, by what he calls her uncanny resemblance to his other daughter Lucy. (Colman's Anne, her eyes brimming with tears, cedes a passing resemblance but refuses to discuss Lucy further.) Anthony, in his bathrobe, enters the kitchen for breakfast only to be told that it's 8 p.m. and time for dinner. He open the front door that leads outside, only to discover the interior of a closet. He walks in on a conversation between Anne and Paul that's nearing its end, he leaves the room, and when he returns minutes later, they're at the exact place in the conversation they were before. In short, Anthony never truly knows where he is, or when he is, or who the people around him are, and Zeller's script (co-adapted by Christopher Hampton) and tightly controlled direction – aided by the subtly phenomenal set decoration – ensure that we never do, either. Just as Sound of Metal allows you to subjectively experience the loss of your hearing, The Father lets you subjectively experience the loss of your sense of reality.

Inventive and meticulously crafted though Zeller's achievement is, The Father might easily have been unendurable without Hopkins' majestic portrayal, which stands as perhaps the finest testament to the star's gifts on his long cinematic résumé. Not exactly revered for his lightness of spirit onscreen, Hopkins has moments of playfulness that catch you completely off-guard, as when Anthony's teasing flirtation with Poots' Laura inspires an impromptu tap dance. Yet even that delightful moment leads to Anthony, mere seconds later, cruelly annihilating the poor girl with a perverse bit of one-upmanship, and just as you can never precisely tell what's happening to Hopkins' character from one minute to the next, you're also never quite sure where, from beat to beat, Hopkins' performance will take you. He'll vociferously rant and rave before retreating into a melancholic remembrance; his calm respite will suddenly end and he'll collapse into sobs. While Hopkins makes everything Anthony does feel organic, and certainly places you inside the man's skin, the grand theatricality of his work – the unmistakable joy he exudes in taking on this Lear-esque role – keeps the harrowing proceedings from being so wrenching that you no longer want to look at him. Instead, you find yourself wanting to look closer and closer – to notice not merely Hopkins' epic gestures, but those miniscule changes in inflection and demeanor that help you find your bearings and, you feel, might help you more specifically understand Anthony. Like Laura, you effectively become his caretaker, too.

If there's a mildly unsatisfying element to the movie, it lies in the depiction(s) of Paul, whose actual presence and purpose in the narrative are left uncomfortably vague, with both Gatiss and Sewell – at their director's insistence, I'd imagine – projecting maximum smarminess and smirk. (Unlike the Olivias, these actors don't at all resemble one another, though they're equally skin-crawling here.) But Colman, as heartbreaking as she's ever been, is like an open wound in human form, Williams and Poots are fantastic, and the tricky storytelling presents and resolves itself with stunning assurance. By the final minutes of The Father, when you basically need a squeegee to mop up your tears, you're at least no longer in the dark. Hopkins' transcendent acting, meanwhile, delivers nothing but radiance. 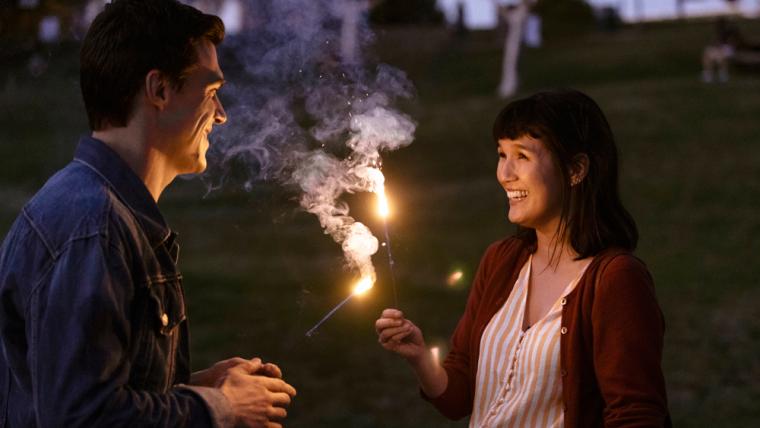 “Are you one of those manic-pixie dream girls?” So asks Finn Wittrock's Bart of Zoë Chao's Vienna not long into writer/director Steve Basilone's unexpectedly touching L.A. romance Long Weekend, and the film-savvy question is a perfectly reasonable one. Like a lot of manic-pixie dream girls over the years, Vienna – whom the depressed Bart meets after a revival-house screening of the Peter Sellers comedy Being There – seems too good to be true: she's beautiful, but in an approachable way; she's feminine, but with a hearty love of profanity; she's feisty and game for anything and can drink Bart under the table. And okay, sure, she refuses to reveal anything about her past, and doesn't own a cell phone, and walks around with tens of thousands of dollars in her purse. But for a straight, single guy in the big city, those aren't deal-breakers. Vienna's eventual insistence that she's actually a time-traveler visiting from 2052, however, might be a biggie.

It's been a while since we've had one of these kinda-sci-fi, kinda-dramatic indie rom-coms at the cineplex – something akin to Ruby Sparks or Safety Not Guaranteed – and until Basilone's feature-film debut, I hadn't realized how much I missed them. Despite the movie, even at under an hour-and-a-half, feeling far too padded with generic montages, and despite it inspiring about a zillion more questions than it has time to address, Long Weekend is a low-key winner. The enviably handsome Wittrock has been deserving of this sort of friendly, empathetic, emotionally accessible leading role for ages, and he's just marvelous here; you're in Bart's corner long before his crises of confidence and sanity. While Chao's portrayal may be a tad too indebted to the Manic-Pixie Dream Girl stereotype for comfort, she's tremendously appealing, and has a few instances of utter rawness – especially when the repercussions of time travel (or “time travel”?) lead to devastating lows – that cut directly to your heart. And as with all romantic comedies worth their salt, this one boasts a terrific, if mildly underpopulated, supporting cast, with Damon Wayans Jr. quick-witted and sensational as Bart's best friend and Wendi McLendon-Covey a hoot in her two scenes as Bart's put-upon landlady with whom her tenant good-naturedly flirts. (“In another world, we could have had a totally destructive relationship.” “I would've ruined your life!”) It's slight. It's slightly too precious. Yet Long Weekend is a totally unanticipated charmer, and one with enough specific hints as to where we're heading in 2052 to make it not just engaging, but fascinating. “Really?” asks Bart when Vienna reveals the company whose stock she's planning to purchase. “Hyundai?” She replies, “Oh yeah." Noted.