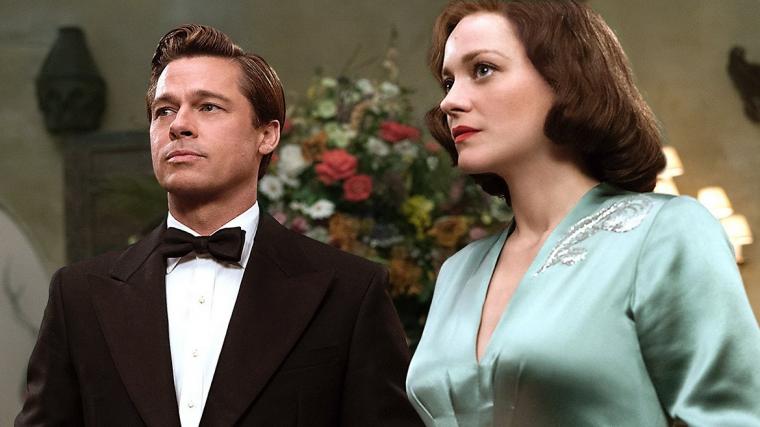 Robert Zemeckis’ World War II thriller Allied is a movie teeming with pleasures, from Steven Knight’s deft and ingenious screenplay to the flawless production design to the visual effects that are employed so seamlessly they barely register as effects. Somehow, they all emerge as afterthoughts compared to the consistent, devastating pleasure that is Marion Cotillard. Over the years, the Oscar winner has had better roles and has delivered finer portrayals, although maybe no more than two or three of them. But Cotillard’s radiant charisma and performance gifts are employed so stunningly well in Allied that the film, quite early on, begins to feel unimaginable without her – at least barring a miraculous hole in the space-time continuum that would allow a 1940s Ingrid Bergman to take her place.

Before we and the movie get to Cotillard, Zemeckis’ latest starts with one of the more breathtaking opening shots in recent memory, as Brad Pitt’s Royal Air Force commander Max Vatan, in 1942, makes a parachuted descent into the Moroccan desert. (With the sandy waves of the dunes giving us no sense of perspective regarding how far Max is from the ground, it’s a sight that’s both gorgeous and nerve-racking, just as the film itself proves to be.) A jeep arrives to escort this native Canadian to a nightclub in Casablanca, where he’s to meet his new partner in a plan to assassinate a high-ranking Nazi official. Max and his associate – French-resistance soldier Marianne Beauséjour – are to pose as husband and wife to gain access to their German target, and as he’s never before met her, Max is told to seek out the woman in the purple dress. Looking almost impossibly debonair for a man so recently covered in sand, the tuxedo-clad Max enters the club and, across the smoky room, spots Marianne. She turns toward him. And when Cotillard first locks eyes with Pitt, and he stares back, the sound you hear in the auditorium is likely that of every fan of Old Hollywood swooning with rapture.

If you’re curious about seeing Allied and have managed to avoid its trailers, I urge you to continue dodging them, as they unfairly (but, marketing-wise, understandably) give away a mid-film plot twist that I would’ve loved to have not had spoiled for me. But you can also ignore them because excess details about the film’s arc are immaterial to the movie’s appeal as a glorious, old-fashioned, star-driven melodrama, albeit one with rougher language, grislier violence, and more nude body parts than the studio system of yore would have permitted. In terms of storyline, the script’s first act concerns Max’s and Marianne’s attempts to pass as marrieds and kill a few Nazis, while its second finds the duo, a year later, enjoying more serene lives in London until a new mission rears its ugly head. Yet despite the cleverness and procedural specificity of Knight’s screenplay, Allied is most effective in its majestic flourishes that, in a less confident work, could have come off as mannered at best and kitschy at worst, and that don’t have all that much to do with the narrative. Pitt’s and Cotillard’s first moments together are fantastically satisfying, in large part, because of the almost ridiculous physical beauty of their pairing; when these two share the screen as lit by cinematographer Don Burgess, that’s an awful lot of pretty to take in. Time and again, though, Zemeckis stages sequences so grandly scaled that they match the combustible intensity of the leads’ golden-era chemistry: Max’s and Marianne’s romantic clinches in the midst of a raging sandstorm; Marianne giving birth during the cacophony of an air raid; a downed fighter jet crashing a few hundred yards from our protagonists’ home. These and other only-in-the-movies scenes come within an inch of parody. They’re presented, however, with such visual imagination and force that they wholly transcend camp, just as the film’s more Hitchcock-ian beats – including an early, scary murder involving a phone booth and half a breadstick – avoid the appearance of homage by exuding a scuzzy vitality that feels distinctly modern. Not all of Zemeckis’ attempts at grandeur succeed, and what should’ve been a boldly cathartic finale is instead overly sentimental – a bit of Forrest Gump schmaltz tacked onto an otherwise clear-headed entertainment. But you’re still grateful to the director for his willingness to swing for the fences. Knight’s plotting makes Allied a true nail-biter; Zemeckis’ contributions, on frequent occasion, make it an emotionally acute one.

Although he gives impressive smolder and is handsome as hell, it admittedly took a while to warm to Pitt here, considering how many times his dramatic expressions reminded me of previous comedy turns. (I detected some Inglourious Basterds in the scene of Max trying to pull off a Parisian countenance, and every time Pitt squinted in an attempt to appear menacing, it looked as silly as it did when he was unsuccessfully strong-arming John Malkovich in Burn After Reading.) But Pitt is terrifically watchable regardless, and, in later encounters with the likes of Jared Harris and Lizzy Caplan, he comes through with ever-more fervent, heartfelt work. Besides, Pitt’s got Cotillard around to make him look even better than he actually is.

During the film’s first half, in a series of ravishing dresses and blouse-and-slacks combos courtesy of costumer Joanna Johnston, Cotillard seems more relaxed, spontaneous, and naturally authoritative than we’re used to seeing her in English-speaking roles. (When they’re first alone together, Marianne wastes no time in chiding Max for his woeful attempt at a Parisian dialect, and a good thing, too.) But as the film’s progression requires Marianne to grow more inscrutable, Cotillard’s face subtly, almost imperceptibly, begins to harden with the possibility of potentially sinister motives, and we start to realize how many hints of that darkness were dropped even in Marianne’s lighthearted moments. She’s always a bewitching presence and nearly always superb, but in Allied, Cotillard floods the screen with just about everything this war-themed noir needs: glamour, humor, seductiveness, mystery, and seemingly ceaseless reserves of honest emotion. Cotillard may be fighting for the French resistance here, but there sure ain’t no resisting her. Director Terry Zwigoff’s 2003 Bad Santa was a surprise: a one-joke slapstick that generated what felt like hundreds of laughs. Director Mark Waters’ Bad Santa 2, meanwhile, is a shock: a years-too-late sequel with an uninspired premise that manages, through sheer force of personality, to be every bit as hysterical as its predecessor. It doesn’t happen often (or often enough), but every once in a while I’m confronted with a comedy that I can’t defend on nearly any aesthetic level that still makes me cackle until I cry. Bad Santa 2, I’m happy-slash-a-little-mortified to say, is one of those comedies – profoundly tasteless and morally repellant and just what the (probably unlicensed) doctor ordered. Forget about the plot, which involves another crime caper, this time in Chicago, masterminded by Billy Bob Thornton’s reprobate safe-cracker Willie and Tony Cox’s scheming accomplice Marcus, with Kathy Bates assisting matters as Willie’s loathsome mother. (Recalling the miracle of her son’s birth, Mama confesses, “I didn’t know I had him ’til I tripped over him.”) Enjoy it, if you have the constitution for it, for the stars spitting out hateful, profanity-ridden insults with so much sarcastic venom – and having such an obvious good time doing so – that you’re left all but powerless to resist. And see it for the unparalleled sweetness of Brett Kelly as Billy Bob’s cheerfully addled charge Thurman Merman, who delivers self-directed zingers with such puppy-like warmth that his punchlines seem to exist in some warped, daffy universe all their own. Arriving in the Windy City, uninvited, in the employee uniform he wears at his California sandwich shop, Thurman calls Willie and asks if he’ll pick him up, as he’s cold in his polo shirt and shorts. “I only brought my gloves,” he says, revealing that he is wearing gloves – those transparent plastic gloves required by sub-sandwich makers worldwide. Just typing that has me giggling. Don’t get me started on the kid’s reaction to turkey bacon.