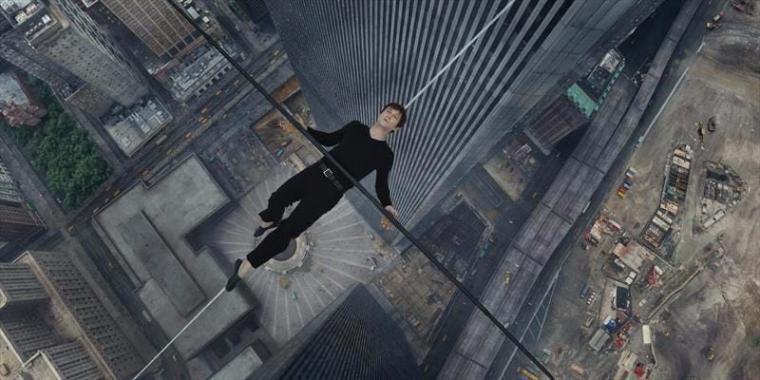 Joseph Gordon Levitt in The Walk

There have been verified reports of patrons vomiting during the last half hour of The Walk, director Robert Zemeckis' big-budget take on Philippe Petit's famed 1974 high-wire trek between Manhattan's Twin Towers, a tale previously recounted in James Marsh's Oscar-winning documentary Man on Wire. The response of those patrons is understandable; as a lifelong sufferer of vertigo - especially when those vertiginous heights are around 1,368 feet above street level - I did have to look at the cineplex floor a few times to steady my nerves. But in the end, my senses of profound terror, anxiety, and euphoria at Zemeckis' cinematic feat proved worth the discomfort. I only wish I could say the same for the movie's first 90 minutes, which could easily provoke vomiting among those, like myself, who gag at the mere thought of revisiting Amélie.

The dementedly winsome Audrey Tautou isn't around, thank the gods. But another ebullient, impish sprite is forced on us courtesy of Joseph Gordon-Levitt, whose Petit may be the most thoroughly obnoxious film lead 2015 has yet delivered. When it's not slipping, Gordon-Levitt's French accent is just fine. What makes it excruciating is that it's being used in service of suffocating whimsy from The Walk's first seconds, which find Petit - I kid you not - narrating the entire movie, on-screen, from the torch of the Statue of Liberty. I'm pretty sure that tarring and feathering is no longer a form of governmentally sanctioned punishment. But for this particular conceit by co-screenwriters Zemeckis and Christopher Browne, I think an exception should be made. Every time the film gets a solid rhythm going in its first three-quarters, the yammering pixie Petit whisks us back to the statue's apex for more ruminations about his self-aggrandizing moxie and "ah-tees-tic dee-si-i-i-ire," and every single time he does, you wind up wanting to throw a brick at him.

Granted, on occasion, Petit's narrative interruptions are interrupting scenes you're happy to be rid of anyway. Loaded with the sorts of superhero-origin-story details that Man on Wire wisely eschewed, The Walk gives us the whole, fraudulent-feeling account of how little Philippe became obsessed with circus feats and trained himself to be a gifted unicyclist, clown, and mime. (At one point, he actually does that "trapped in a glass box" crap to win the heart of a girl played by Charlotte Le Bon, whose resemblance to Winona Ryder would be more noteworthy if she didn't more strongly resemble Audrey Tautou.) Scenes with Ben Kingsley, doing one of his typically hammy and geographically unidentifiable accents, show how Petit mastered the art of tightrope; scenes during an early visit to New York City show how he was able to recruit his team of Francophile accomplices for his public-art stunt. (Among those half-dozen accomplices, only James Badge Dale, as a native Frenchman and electronics whiz, seems capable of independent, human thought.) Zemeckis employs every visual trick in the book during these preliminary scenes: slow motion; fast motion; black-and-white with specified images in color; objects being awkwardly, self-consciously hurled at us in 3D. (As with Everest a couple weeks ago, the IMAX 3D version is the only way to currently see The Walk until its full national release, which happens on October 9.) And if the Big Fish-iness of it all and Gordon-Levitt's relentlessly forced bonhomie aren't already enough to irritate and exhaust you, viewers - or rather, viewers of a certain age - are likely to be uncomfortably put off by the blitheness of the film's representation of just how pathetically easy it was, strictly speaking, for Petit to pull off his act of non-violent insurrection. This is hardly Zemeckis & Company's fault. They can't be blamed for showing, in the film's 1974 setting, just how simple it was for Petit to enter New York from France with a suitcase filled with rigging devices and tell airport security exactly what he was planning to do and be let into the country anyway. But Zemeckis might've at least thought twice about filming this scene - and his scenes of Petit infiltrating the Twin Towers disguised as a handyman, messenger boy, et cetera - without quite so much jaunty Alan Silvestri music, and visual slapstick by way of clever editing, and the growing fear that we're watching an adorable heist pic à la Oceans 11 through 13.

Ah, but then the last half hour lands, and The Walk finally becomes everything you were hoping - and maybe also dreading - it would be. There are smartly staged near-misses involving security guards and a missing arrow and an unexplained visitor atop one of the towers - a two-minute, wordless sequence that is perhaps Zemeckis' most haunting one, suggesting that Petit's presence may have, at least for the moment, staved off a potential suicide. And then Petit makes his walk. The film has prepped us sufficiently, and fascinatingly, with the logistics behind how he's going to pull off this spectacular feat, and all it takes is basic knowledge of Petit's legacy, or a viewing of Man on Wire, or a simple Wikipedia perusal, to know that the man will successfully pull off his incredible stunt. (To say nothing of the fact that, even during the walk itself, Gordon-Levitt's madcap narrator won't stop freaking yammering about how amazing the experience is.) Almost incomprehensibly, though, none of that matters in the face of the wondrous verisimilitude Zemeckis and cinematographer Dariusz Wolski deliver.

Trying to describe the sensation of The Walk's walk is a bit like trying to describe the zero-gravity experience of Gravity when viewed in IMAX 3D, so it's wiser for me to not even try. Suffice it to say that Zemeckis - aided by Gordon-Levitt's wholly believable comportment - manages to give you a first-person account of the goings-on that are alternately nauseating, nightmarish, and blissfully soothing, and manages to find room in this sequence for action-blockbuster thrills, nerve-ratcheting tension, wisenheimer comedy, and even unadulterated grace. It may be the best final quarter after an underwhelming first three-quarters in the entirety of my movie-going history. Plus, it all ends with a beautiful, only-slightly-manipulative ode to the lingering majesty of the Twin Towers, which emerge, in Zemeckis' final shot, as the true stars of the movie - the man-made objects worthy of all of Petit's superhuman devotion. Flaws and all, there's no way I couldn't recommend The Walk. If you happened, somehow, to merely sneak into its final 30 minutes with 3D glasses in tow, I'd recommend it even higher. After The Walk, in which city buses seem as small as insects, it was fun to enter the Putnam Museum's Tiny Giants 3D to see insects as big as city buses. And interestingly, the two wee critters focused on in director Mark Brownlow's edu-doc - a baby chipmunk living in a heavily wooded forest and a two-month-old scorpion mouse residing in the American southwest - are given exactly the same superhero treatment as Philippe Petit. Both are shown, despite their miniscule size, to possess incredible abilities - in the mouse's case, an imperviousness to poison; in the chipmunk's, a nut-storing resemblance to Dizzy Gillespie - and both are frequently shown warding off or attacking predators in slow motion, with obviously heightened sound effects upping the danger factor. (Maybe even some CGI: Far be it for me to suggest that National Geographic films would fake any of their nature footage, but the moose and rattlesnake segments did seem a teeny-tiny bit, shall we say, rehearsed.)

All told, it would be nearly impossible not to have a great time at this thing. The expectedly killer camerawork boasts vivid, eye-popping details, and as a longtime frequenter of the Putnam's docs, I'm always happy when I learn a lot, and I did at this one - who knew that certain desert mice let out piercing (and hugely amusing) howls to warn neighboring animals of their presences? Narrator Stephen Fry, at one point, mentions that the on-screen desert scenarios are not unlike Jurassic Park, but they seemed to me far more reminiscent of Rango, and I applaud the filmmakers for not turning Tiny Giants 3D into a pandering, anthropomorphic shrug on a par with most of Disneynature's recent releases ... though they easily could have. It never happened, thank heavens, but as soon as I saw that our scorpion mouse's home was beneath that of a worn-down tow truck, I kept waiting for it to come to life with the hillbilly cadences of Larry the Cable Guy. Before I saw the title pop up on Davenport's Cinemark Web site, I hadn't heard a thing about the new release Hell & Back. I clicked on this heretofore-unknown-to-me flick's title to see exactly what it was, and learned that it starred Nick Swardson and Mila Kunis, and that it was a "Comedy, Fantasy, Adventure." Somehow, I'd wholly missed the mention that directors Tom Gianis' and Ross Shuman's outing was also a capitalized "Animated" release - and once the movie started, that at least prevented me from wanting to blow my brains out for knowing that Mila Kunis, for some reason potentially involving blackmail, had agreed to co-star in anything opposite Nick Swardson.

In theory, I love the idea behind Hell & Back. It's a stop-motion-animated endeavor not unlike last year's The Boxtrolls or The Book of Life, even if it does display an incredibly rudimentary take on those films' technique. And in its tale of two 20-something best buds (voiced by Swardson and T.J. Miller) who travel to Hell to save a third pal (Rob Riggle) from eternal damnation, it features some inventive design and a few good jokes. I actually laughed out loud at the ghoul who kept tormenting souls with hell-ish inconveniences such as the Pizza Hut/Taco Bell chain that refused to serve pizza, and the offers of Neapolitan ice cream when the only flavor left was strawberry. ("Welcome to Hell!" was the comedic retort every time pranks of this sort were pulled, and damn my soul forever, but I laughed every time.) But this incredibly lazy, unapologetically juvenile, deservedly R-rated slapstick - one in which roughly a third of the gags stem from gay panic or gay "curiosity," which in these alpha-bro comedies is the same thing as panic - remains a moderately clever, 10-minute Adult Swim effort that runs eight times longer than necessary. Expectedly homophobic, misogynistic, xenophobic, racist, and every other adjective you could predictably hurl at a Nick Swardson movie (and how, in 2015, is this man still getting film work, animated or otherwise?!), the film is draining to sit through. Thankfully, Hell & Back will be quickly forgotten, which can only be good news for vocal participants Kunis (especially after starring in this year's Jupiter Ascending debacle), Bob Odenkirk, Danny McBride, Jennifer Colidge, Archer's H. Jon Benjamin, Maria Bamford, and Oscar winner Susan Sarandon. I will, however, relish the chance to have heard Sarandon sing again, even if it her crooning here is in a different, and not at all hoped-for, sort of rocky horror.