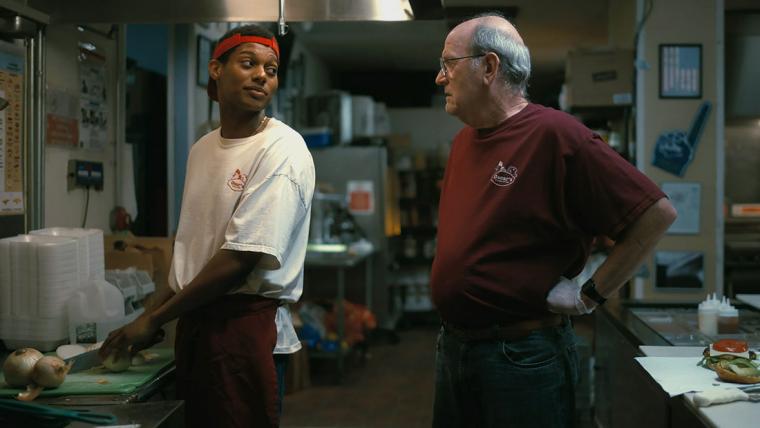 Shane Paul McGhie and Richard Jenkins in The Last Shift

Near as I can tell, and despite more than 100 screen credits, 73-year-old character actor Richard Jenkins appeared in exactly two leading roles for movies and television between 1974 and 2019: as a lonely college professor in the Tom McCarthy drama The Visitor, and as Frances McDormand's supremely patient husband in the HBO miniseries Olive Kitteridge. He was nominated for an Oscar for the former, and won an Emmy for the latter. Ummm … doesn't that suggest, in regard to starring roles, he maybe shoulda had more?

Thankfully for the Jenkins fans among us, writer/director Andrew Cohn clearly felt the same way, as the eternally excellent performer is currently headlining the documentarian's narrative-feature debut The Last Shift. Although Cohn's indie dramedy takes a more intriguing turn than you may initially expect, his film is almost pure formula, and formula you're likely familiar with: it's Chico & the Man; it's Superior Donuts; it's every entertainment in which a cranky (white) senior and a sassy upstart (of color) bicker and banter their way to mutual acceptance. But it stars Richard Jenkins, and that alone makes it more worthwhile than this well-meaning diversion might've otherwise been.

The Last Shift casts Jenkins as Stanley, a 38-year veteran of a struggling fast-food restaurant in small-town Michigan. Although Stanley's entire, thankless tenure has been spent working the graveyard shift, it's clear from his artful preparation of a chicken sandwich that the man takes enormous pride in his job – even if, as evidenced through an early encounter with a trio of stoned high schoolers, that pride has turned him into something of a local laughingstock. Stanley, however, is about to move to Florida to care for his ailing mother, and his final days as an assistant manager require him to train his replacement: the 20-something wannabe-writer Jevon (Shane Paul McGhie), newly on probation for defacing a federal monument, and not at all happy to be taking over Stanley's dead-end gig. The talkative older employee shares his nearly four decades of burger-joint “wisdom”; the sulking younger one barely seems to pay attention. Stanley bristles at Jevon's lack of initiative; Jevon balks at Stanley's authoritarianism. Can two fast-food workers share a graveyard shift without driving each other crazy?!

Even if you've somehow never seen The Odd Couple or any of its odd-couple successors, you know the answer here is bound to be “kind of,” and Stanley and Jevon eventually kind of get along, at least tolerating one another's differences and teaming up for a late-night game of frozen-meat-patty shuffleboard. But the material is still largely a groan. Of course Stanley will be a miserable loner with all of one friend (an appropriately gruff Ed O'Neill) and nothing, not even a car, to show for 40 years of tireless labor. (Eventually he does get a car, which remains in solid shape for all of 30 seconds.) Of course Jevon will be living in a cramped apartment with his mother, girlfriend, and one-year-old son he barely connects with. Despite the actors' considerable chemistry, Jenkins and McGhie are stuck playing tiresome stereotypes in sadly clichéd circumstances, and even when the narrative veers toward darker terrain by establishing Stanley as a potential (if closeted) racist, Cohn's plotting throughout is too neatly diagrammed. While the movie's final scenes are mildly surprising for their lack of conventional uplift, they're just about the only unconventional elements to be found.

Still, if Cohn doesn't presently demonstrate much in the way of original thinking, he already appears to be a more-than-capable director of performances. McGhie is fantastically magnetic, imbuing Jevon with a visible intelligence and offhandedly caustic wit, and in smaller roles, Allison Tolman (as Jevon's level-headed parole officer) and Da'Vine Joy Randolph (as Stanley's dismissive supervisor) are both wonderful and welcome. Jenkins, meanwhile, may be playing his umpteenth downtrodden sad sack, but he's so invested and specific in his choices for Stanley that the portrayal, although customarily outstanding, is unlike any other I've seen him give.

The actor has come up with a perfect doofus chortle – Stanley feels like a guy who always gets the joke three beats late – and it beautifully offsets the strangled wheeze of his breathing and vocal rhythms; you can hear the toll of Stanley's lifetime of cigarettes and oppression in every one of Jenkins' readings. But while you don't sense the performer actively judging Stanley, and he never tries to make the man loveable, Jenkins also doesn't refrain from revealing his seemingly decent figure as also stubborn and paranoid and relentlessly self-pitying – someone who considers the world aggressively against him, and who consequently considers himself owed. Jenkins doesn't shy away from the inherent ugliness of Stanley's character, and through his exquisitely layered work, he turns The Last Shift, for all of its failings, into a thing of occasional beauty.

I'm sure that studios are desperate to get anything onto U.S. screens these days – anything, that is, except titles that would ordinarily make way more money than they would at present. But could there ever have been a proper time to release director Alessio Liguori's Shortcut, a British monster flick of such astounding awfulness that its running length of 80 minutes feels about 79 minutes too long? Kind of like what you'd get if the cast of The Goonies wound up in The Descent, this low-budget, low-inspiration knockoff sends five teens and their bus driver first into the woods, where they encounter a serial killer known as “The Tongue Eater,” and then into a tunnel, where they encounter a fanged, hungry beastie with an aversion to light. If the creature also had an aversion to god-awful scripts, we all could have been spared this cheap-looking, badly acted, resolutely not-scary atrocity that finds its kids shrieking in fear one moment and making lighthearted jokes the next, with many of the script's particulars unsubtly introduced and then, bizarrely, immediately forgotten. (What is the point of the frequently referenced lunar eclipse? Why did we get a lengthy flashback to the chubby kid eating a bacon cheeseburger? Why is a serial killer even in this thing?) Considering how much I want theaters to stay open, and how few cinematic options we currently have, it feels rude to hate on Shortcut with the fervor it deserves. Suffice it to say there are more enjoyable ways to spend your time at the cineplex. Even if that time is spent in your car just staring at the cineplex.