Missing the Mark ... and Not Missing Him: “Patriots Day,” “Sleepless,” and “The Bye Bye Man” 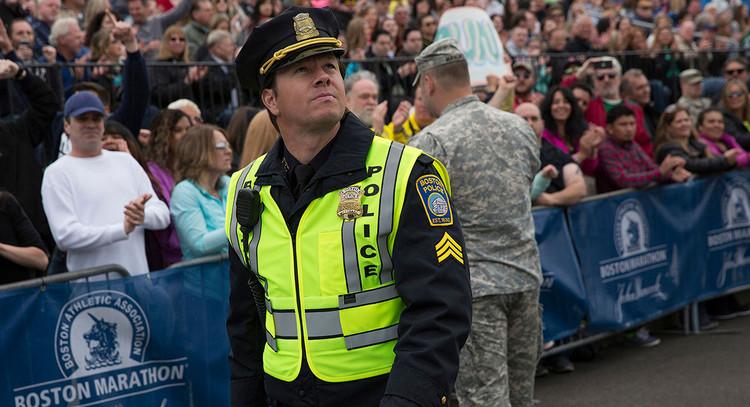 Rarely do I want movies to be longer. But there’s enough that’s great about Patriots Day – director Peter Berg’s procedural thriller about the Boston Marathon bombings – that suggests how great it might have been if given a more expansive presentation à la FX’s 10-part docu-drama The People v. O.J. Simpson. Heaven knows Berg had the cast to pull it off – with one exception. One major, infuriating, movie-wrecking exception.

Whenever said exception isn’t on-screen, however, Patriots Day is gripping stuff. For close to a half-hour, Berg and co-screenwriters Matt Cook and Joshua Zetumer do a marvelous job of building dread, primarily by refusing to push the dread. (And they certainly could have, considering that frequent David Fincher collaborators Trent Reznor and Atticus Ross composed the score.) Long scenes are devoted simply to observing the evening and next-morning activities of figures who will be forever altered by the events of April 15, 2013: Watertown police Sergeant Jeffrey Pugliese (J.K. Simmons) buying his wife a muffin; Chinese grad student Dun Meng (Jimmy O. Yang) Skype-ing with his overseas parents; young lovers Jessica Kensky and Patrick Downes (Rachel Brosnahan and Christopher O’Shea) bantering over the proper pronunciation of “Red Sawx.” These and other early sequences are shot and performed with such charming, unexceptional normalcy, and such an eye for detail, that they make you fear the inevitable through basic empathy; it doesn’t take much more than the awkward flirtations and winning smile of MIT patrolman Sean Collier (Jake Picking) to make your gut ache at the fate awaiting him and so many others.

After the bombings and their immediate aftermath, with Berg and editors Gabriel Fleming and Colby Parker Jr. seamlessly blending re-created and surveillance footage of those horrific minutes, the film’s design becomes more chaotic – which feels appropriate given the circumstances. We do, after all, have to check in with Kensky, Downes, and others gravely injured in the explosions. But there’s also an investigation to follow, with teams hastily assembled by FBI special agent Richard DesLauriers (Kevin Bacon) and Police Commissioner Ed Davis (John Goodman). There’s the political angle to explore, with Boston Mayor Thomas Menino (Vincent Curatola) and Governor Deval Patrick (Michael Beach) unsure about whether they should, or can, label this an act of Islamic terrorism for the fact-hungry press. And there are the terrorists themselves – brothers Tamerlan and Dzhokhar Tsarnaev (Themo Melikidze and Alex Wolff) – who choose Times Square as the next locale on their hit list, and make the blessedly disastrous mistake of carjacking the Mercedes-Benz belonging to Dun Meng.

To his immense credit, Berg manages to keep all these balls in the air with such finesse that you barely notice when he drops occasionally drops one. Some of the film’s pandering attempts at tension-breaking humor, such as Meng’s demand that the cops “Get these motherf-----s!”, fall flat, and true-to-life though the scenario may be, there’s a bit too much Die Hard in the obscenely excessive (if incredibly well-filmed) shoot-out that finally ends with Pugliese physically tackling one of the terrorists. More often than not, though, Patriots Day boasts a thrilling intelligence, both behind the camera and in the actions and performances of those in front of it. 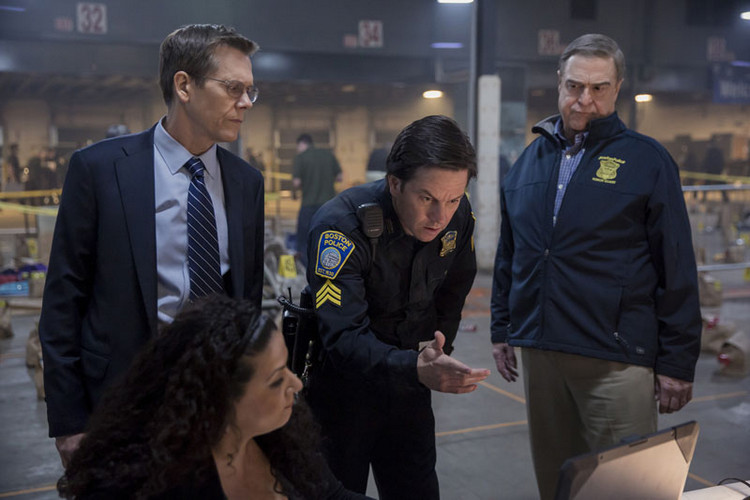 The longest sequence in the movie, in which the quietly panicky Meng attempts to think his way through an impossible situation, is also its most unbearably nerve-racking, and does what all the best scenes in docu-dramas do: It makes you distrust your own recollection of historical events. Yet with Berg's supporting ensemble giving portrayals of sensational authenticity, you’re nearly as hooked in less overtly mesmerizing encounters, as when DesLauriers learns that his investigation’s secrets have been leaked to Fox News, or when – in the film’s most utterly hypnotic five minutes – Tamerlan Tsarnaey’s wife Katherine Russell (Melissa Benoist) is questioned on her potential involvement in the bombings. Because Russell was never charged with a crime, this scene may be morally, and even legally, indefensible. But I, for one, wouldn’t have wanted one second less of it, given Benoist’s performance of Lady Macbeth-esque insinuation and wickedness, and Khandi Alexander’s jaw-dropping assuredness and confidence as Russell’s inquisitor.

You know what I did want less of, though? Patriots Day lead Mark Wahlberg. And by “less,” I really mean “none.”

For reasons known only to film financiers, and perhaps also the gods of epically stupid decisions, it was decreed that there wasn’t enough inherent heroism, bravery, and decency in the cops, rescue forces, hospital staffers, and Massachusetts citizenry involved in the Boston Marathon attack, and audiences clearly needed a big slab of Hollywood star-power to save the proverbial day. But Wahlberg’s police officer Tommy Saunders – a “composite” figure that’s just Hollywood-speak for “totally made-up” – is a disastrous blight on the proceedings, like it would be if you put Sherlock Holmes at the center of All the President’s Men. It’s not enough, and God knows it would be, that Wahlberg is given a mawkish, unconvincing, for-your-consideration speech in which he waxes eloquent about love triumphing over evil and blah blah blah. Saunders, our headstrong yet unimpeachable man-of-the-people, also has to be stationed right at the marathon’s finish line, and give the FBI the bright idea of questioning witnesses, and find Dzhokhar hiding beneath the tarp of a boat, and be the guy whose hand David Ortiz shakes on his way to his famed Fenway Park speech. (It’s also suggested that this fictional character was the one who leaked sensitive information to Fox, which the movie treats as Saunders’ comedic eff-you to the FBI. Wahlberg’s Staff Sergeant Dignam from The Departed would pause exactly two seconds before choosing to shoot this rat Saunders in the face.) Thankfully, the movie ends not with Wahlberg, but with screen testimony by many of the real people dramatized on film – a lovely, touching gesture. Yet it’s not quite enough to erase Patriots Day’s biggest and most depressing failing, one that’s merely exacerbated by all the excellence surrounding him. Every time Saunders/Wahlberg showed up and interrupted a perfectly fine scene with Goodman or Bacon, I wanted to tell this chowdah-head to back awf and let the pros do they-ah gawd-damned jawbs. 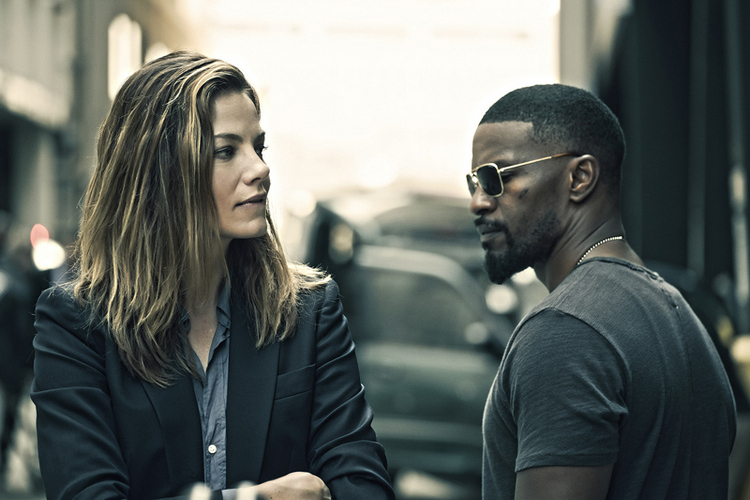 After seeing her talents wasted as Mark Wahlberg’s fretful spouse in Patriots Day – especially in light of similar suffering through Pixels, The Best of Me, and the worst major role in True Detective’s first season – it was a true pleasure to watch Michelle Monaghan’s internal-affairs detective match brains and ass-kicking ability with Jamie Foxx’s dirty cop in the crime thriller Sleepless. What I didn’t anticipate was just how many other actors would contribute to making director Baran bo Odar’s outing such a good time ... for a while. Beyond the leads, this twisty Las Vegas caper boasts David Harbour as Monaghan’s sardonic partner, Gabrielle Union as Foxx’s pissed-off ex, Dermot Mulroney as an oily casino magnate, and Scoot McNairy as a threatening drug-trade welterweight, and all of them attack their roles with relish; even the rapper T.I., as Foxx’s partner in crime, gets into the sordid spirit of things. Better still, screenwriter Andrea Berloff – adapting the 2011 French film Sleepless Night – has a terrific plot at her disposal, and the movie’s escalating threat and who’s-screwing-whom deviousness give the cast loads to chew on and spit out at one another. Unfortunately, tedium sets in as soon as you realize the filmmakers are less interested in delivering an Ocean’s Eleven with a body count than a generic, middlebrow action pic whose sole intent is to polish the fading star of Jamie Foxx.

It was fun to watch Foxx’s mano a mano against Harbour inside a hotel spa, and fun-ish to watch him and Monaghan beat the crap out of each other, if only because Monaghan gave as good as she got. But then Foxx goes on another punching-and-kicking spree with one of Molroney’s henchmen, and then one of McNairy’s henchmen, and then a whole bunch of henchman at once (all the while forgetting about the still-fresh bullet hole in his gut), and my early excitement about Sleepless morphed into an all-too-typical impatience with a movie that delivers a phenomenal cast yet focuses its primary attention on anonymous stuntpeople.

At least the film is occasionally funny, if not always in intentional ways. I laughed, for instance, when Foxx tried to strong-arm a men’s-room attendant who, when he stood up, turned out to be two feet taller than our hero. But I also wound up laughing at the film’s many second-unit shots of a glittering Vegas at night, the camera circling from one neon-lit skyscraper to another. What was the point of establishing the city’s grandeur when all the action takes place in one hotel?! 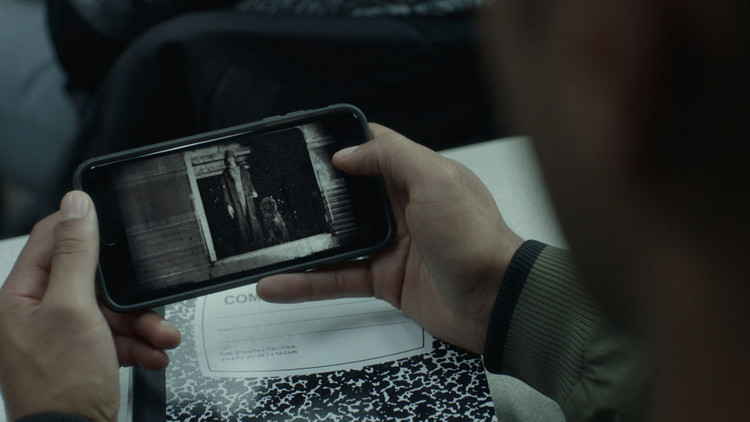 If there’s any sound we’re guaranteed to hear at the cineplex in January, it’s that of some poor schmuck inching his or her way into a dark, scary room while nervously calling out, “Hello? Hello?!” You’ll definitely hear that and many other genre clichés in director Stacy Title’s The Bye Bye Man, but there’s also just enough that’s appealing about this fright flick to keep you from wholly dismissing it as The BUH-Bye Man. The tale of a monstrous entity who torments until death those foolish enough to say or even think his name, Title’s movie is rife with idiocies, from its bloodless (PG-13) shotgun fatalities to its laughable CGI hell-hound to leading lady Cressida Bonas, who’s sufficiently pretty but so inept that she can’t even sneeze without you wanting to send her an acting coach for her birthday. Title, though, shows some skill in her staging of the brightly lit prelude, and there are a handful of giggly/creepy images, particularly when a little girl opens a miniature door at the far right of the screen, and another one simultaneously creaks open at the far left. Bonas aside, she also proves not-bad with actors. Leads Douglas Smith and Lucien Laviscount share a comfortable, relaxed rapport – you buy them as the childhood pals they’re meant to be – and the typically enjoyable Cleo King is a hoot as a librarian who goes way beyond the bounds of professional courtesy or interest. An hour into the film, Carrie-Anne Moss (!) pops up as a dogged detective, her charisma and no-nonsense manner easily making up for her witless dialogue. And not long before the finale, following in the footsteps of Jane Alexander, Alfre Woodard, and Lin Shaye, who should appear but Faye Dunaway (!!!), making her probably inevitable debut as low-budget horror’s Strange Old Lady Who Knows Things. Given that Dunaway was starring in Bonnie & Clyde a half-century ago, you could find her participation here dispiriting. Depends on your tolerance for trash, I guess, because I’d still rather sit through The Bye Bye Man than Rules Don’t Apply.

For reviews of Live by Night, Monster Trucks, and Elle, visit “From Bad to Perverse.”