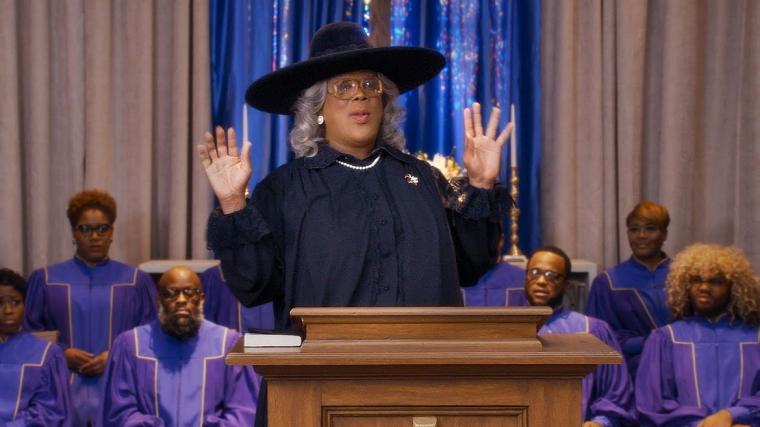 Contrary to Tyler Perry's public statements, I don't for an instant believe that his latest showcase for the straight-shooting, bible-thumping, politically-way-incorrect Madea – Tyler Perry's A Madea Family Funeral – is going to mark the house-dress-wearing hellion's final film appearance, especially considering that the titular ceremony isn't being held for Madea her(him)self. But maybe that's just preemptive grief talking, given that Perry's latest might be his most wholly satisfying Madea outing to date.

To be clear, that's measured praise. As I've repeated nearly twice a year for the last decade-plus, writer/producer/director Perry doesn't appear terribly interested in bettering himself in any of those pursuits, and Family Funeral, like nearly all of the auteur's other comedies, feels less like a movie than a super-sized pilot for an ensemble sitcom with too many characters. This one doesn't waste any time introducing us to its extended clan and initially confusing us about who, precisely, is who. On the eve of a 40th-anniversary party for the seemingly happily married Anthony and Vianne (Derek Morgan and Jen Harper), celebrants gather to pay their respects: son A.J. and his wife Carol (Courtney Burrell and KJ Smith); son Jessie and his fiancée Gia (Rome Flynn and Aeriél Miranda); daughter Sylvia and her husband Will (Ciera Payton and David Otunga); and longtime acquaintance Renee (Quin Walters), who's said to be a friend of the matriarch's, but whose cagey smiles and youthful hot-itude suggest that she may be harboring a secret.

Guess what! She is! Renee, it turns out, has been sleeping with Anthony (who, in turn, has apparently been sleeping with half of Atlanta). And after a particularly vigorous sexual workout – one, naturally, that takes place in a hotel room next to the room in which A.J. is cheating with his brother's fiancée – Anthony drops dead of a heart attack. The proposed anniversary-bash locale consequently becomes a site for hasty funeral arrangements. But have no fear – Madea is here! She can upend an interment just as easily as a party, especially when accompanied, as always, by her eccentric tag-alongs Bam and Hattie (Cassi Davis and Patrice Lovely) and her weed-smoking brother Joe (Perry again … and in his additional roles as the straight-laced Brian and the wheelchair-bound Heathrow, again and again). 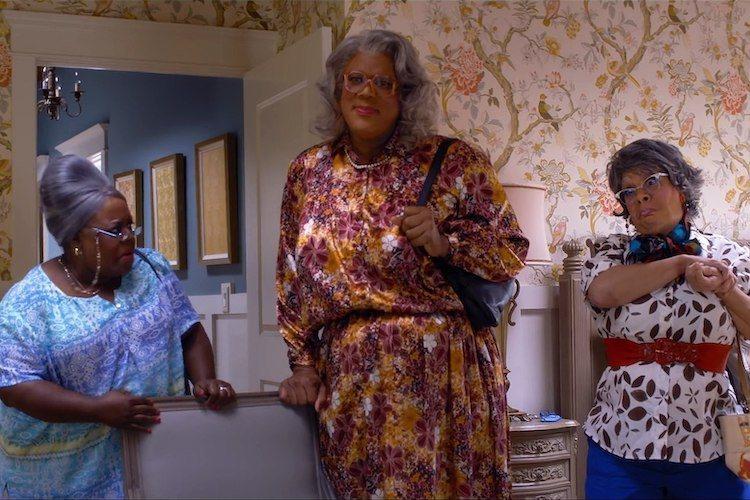 Cutting to the chase, Family Funeral's drama barely works, and if it weren't for an effectively touching monologue by Harper late in the film, it wouldn't work at all. None of the performers in Perry's soap-opera subplots are weak, exactly. Yet the impossibly ripped young men and uniformly gorgeous young women appear there to merely fill time between comic escapades, and the director's handling of their accusations and confessions – so much clichéd dialogue, so much violin on the soundtrack – suggest that Perry may be as bored with their emoting as we inevitably are. In my view, though, this couldn't possibly matter less. From the first, hysterical scene of Madea gabbing with her trio of cohorts to their run-in with a spectacularly unhinged racist cop to the slapstick that found Madea literally smacking the dentures out of Joe's mouth, I was roaring so hard at this dubious swan song that I practically lost all will to critique.

It's something of an unwritten law that beyond Davis, Lovely, and however many Tyler Perrys we're given, everyone else in a Madea movie is forced to act as straight man or woman, delivering easily hittable slow pitches for the others to knock out of the park with caustic punchlines. But that's not quite what happens here; for once, Madea's universe feels legitimately expansive. There are superior comic turns by Joel Rush as that nutjob police officer, Aryeh-Or as an undertaker with too-perfect diction, and Christianee Porter as a piquant parishioner in pearls. (Mike Tyson also shows up in a cameo, but isn't around long enough to significantly diminish the fun.) As a writer and director, Perry finally scores laughs for narrative bits in which Madea is only a tangential figure, such as that riotously eternal funeral with its 85-page program and 10-hour running length. (This despite Madea's pleas that mourners keep their speeches to under two minutes, which doesn't work at the Oscars, and won't fly in Atlanta, either.)

And rather than unquestionably dominating the proceedings, Perry's Madea – who's both sharper and, within reason, subtler than in previous installments – instead slides comfortably into the ensemble, eliciting cackles for her dropped-octave readings of “dead” that are equal to those earned for her explosions of “Oh, hell no!” consternation. My eyes may have occasionally glazed over during the dramatic interludes, but they were oftentimes filled with tears from unbridled laughter, making Tyler Perry's A Madea Family Funeral an almost unmitigated hoot. It's been nice knowing you, Madea. Can't wait to see you again in a year or two. 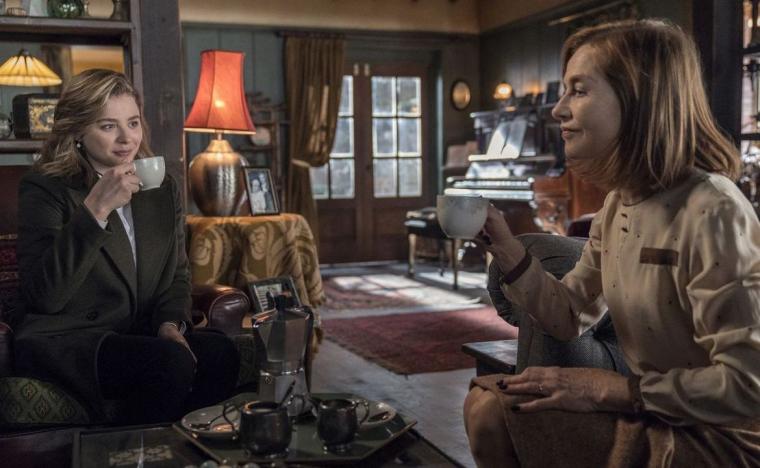 With its writer/director the Oscar-winning Neil Jordan, he of The Crying Game and The End of the Affair, and its star the Oscar-nominated Isabelle Huppert, she of international-cinema iconography, you might expect their collaboration Greta to be high-minded and austere. It's not. It's trashy and silly and absolutely irresistible. In it, Chloë Grace Moretz's recent college graduate finds an abandoned handbag on the New York subway and returns it to its rightful owner, not aware that the woman in question – Huppert's elegant, late-middle-aged socialite – is a crazy-pants stalker straight out of Fatal Attraction. Greta's plotting is almost too ludicrous to be believed. But every second with Huppert in psychotic-Glenn-Close mode is to be treasured, and Jordan is obviously having so much fun with his film's slow boils and smartly staged jump-scares that for the length of its beautifully paced 95 minutes, I'm not sure I ever stopped grinning. Bonus points for the final closeup, which is like Christopher Nolan's Inception finale if that spinning top were the Eiffel Tower. Merde secrée!