No Child Left Behind: "Let Him Go" 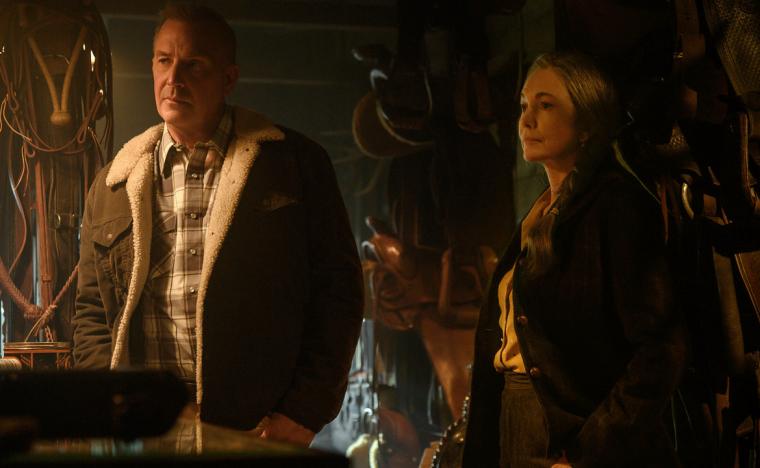 Kevin Costner and Diane Lane in Let Him Go

Is it possible that, in our pandemic era, the cineplex experience won't be saved by young audiences for presumed blockbusters that may or may not open, but rather by dedicated groups of older moviegoers who are happy with simple stories well and elegantly told?

This notion popped into my head while watching Let Him Go, writer/director Thomas Bezucha's first-rate neo-Western (adapted from a Larry Watson novel) that casts Diane Lane and Kevin Costner as Montana ranchers on a mission to rescue their endangered grandson. Aside from a horrific encounter in a roadside motel and a finale that suggests some of Cormac McCarthy's nastier digressions, it's a very quiet, nearly austere film, one that's more reminiscent of melancholy Clint Eastwood than fired-up Sam Peckinpah. But the patrons at my screening, nearly all of them seniors, composed the most populated crowd I've sat amongst since Tenet, and they appeared to have a ball – laughing at the gentle humor, gasping at the legitimate shocks, and, at one point, applauding a villain's deserved death with a fervor implying too many months deprived of that pleasure. Bezucha's movie, which topped this past weekend's box-office chart (not that that was a particularly difficult challenge), might've been a decent-sized hit under any circumstances. Having arrived now, though, the release didn't just give me happiness; it gave me hope. Who needs Wonder Woman's golden lasso or James Bond's smirk when we've got Lane brandishing a shotgun and Costner contentedly munching marble cake?

When I finally saw the Let Him Go trailer early last week, the combination of its stars – Lane with her beguilingly weathered luminosity, Costner with his gruff, laconic decency – seemed so inspired that I wondered why they'd never been previously matched on-screen. It's a measure of just how fully (and apparently willfully) I'd forgotten Zack Snyder's 2013 Man of Steel that the actors' former pairing as Superman's Ma and Pa Kent didn't once enter my mind. I'm betting it entered Bezucha's, though, because this new film is exactly the sort of rich, character-based offering that Lane's and Costner's human-scaled talents and charisma deserve – a cinematic pursuit far worthier than playing origin-story foster parents in a middling comic-book flick. What's especially great about their partnership here is that it requires so little explanation. Long minutes of the movie are devoted to the couple wordlessly communicating their long, shared history, and all of its particulars, through gesture and expression: the disappointment and frustration in Lane's Margaret Blackledge as her husband George purchases a fifth of whiskey; the resigned incredulity of Costner's George as he discovers a suitcase already packed for an ill-considered road trip. You never doubt the couple's love for one another, yet you're always aware that their road to marital fulfillment has occasionally been a rocky one.

It's a relationship that's certainly tested not long into Let Him Go, which is all of 10 minutes old when Margaret's and George's adult son James (Ryan Bruce) is killed after being thrown from his horse. An unexpected jump cut later, James' widow Lorna (Kayli Carter), with her and James' three-year-old son Jimmy in attendance, is now marrying Donnie Weboy (Will Brittain) in a small civil ceremony. The atmospheric awkwardness, Bezucha's deliberately cramped staging, and Donnie's mildly sinister bearing, though, hint that good times are not in store from the moment the spouses say “I do,” and Margaret discovers as much when, unseen by the new family, she witnesses Donnie smacking Jimmy, and then Lorna, on the street in broad daylight. Shot from the interior of Margaret's car with the abuse occurring in silence, the scene is wrenching, as are Lane's devastated reactions. But things are about to get a whole lot worse, because right after Donnie unexpectedly hauls his new wife and stepson to North Dakota to live with his family, Margaret and George hit the road, too, determined to save Jimmy – and, if she wants to come, Lorna – from the unknown terrors of the Weboy clan. 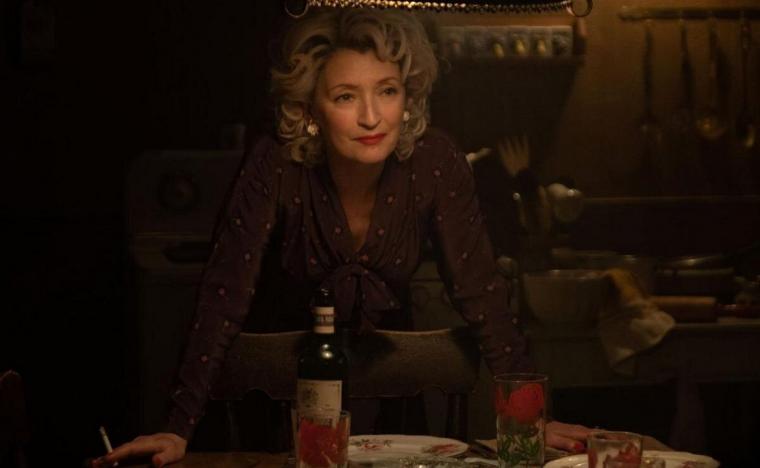 If the first half of Let Him Go is a muted domestic drama about a planned rescue attempt, its second half is a nightmarish thriller in Western-Gothic mode, and while the shift was disruptive, I can't say it wasn't welcome. Bezucha's script does an expert job of telegraphing the Weboys' implied evil through hushed, scared responses whenever their names are uttered: the sheriff's deputy who's obviously aware of the family but isn't going into details; the helpful Native American Peter Dragswolf (Booboo Stewart) who warns the Blackledges about pursuing the matter further. All becomes clear, however, when Margaret and George, having made the unpleasant acquaintance of Donnie's Uncle Bill (Jeffrey Donovan), finally make it to the Weboy homestead and are introduced to the clan's matriarch Blanche, a monstrous, middle-aged figure with platinum-blond hair, long painted nails, a flat Midwestern bark, an omnipresent cigarette, and a manner as serenely welcoming as a cobra's. She's a high-camp horror, and as played by the phenomenal British character actress Lesley Manville, an absolutely unforgettable one.

We never find out what she or any of the other Weboys do for a living. (Donnie also has two brothers as threatening as he is.) Everything about Manville's malignant grande-dame presence, though, suggests “prairie state Mob boss” in the vein of Jean Smart on the second season of FX's Fargo, and while Let Him Go inevitably gets less “real” whenever she's around, it also becomes almost electrifyingly entertaining. Manville is only in three scenes, yet she's so powerful in her grinning wickedness and the control she exerts over her family, blood and extended alike, that the performance feels massive, and you can't imagine the picture without her. I adored Lane's and Costner's tender if frequently pained rapport. But I nearly fell out of my seat with delight at Manville's blatant, beautifully calibrated scenery-chewing – a portrayal that, in its less expansive way, might rival Nancy Marchand's Livia Soprano for sheer, unimprovable ballsiness.

There are sequences, particularly those involving the overly saintly Peter Dragswolf, that feel a little precious and contrived, and while the character sketches we're given in the male Weboys are perfectly serviceable, a bit more understanding into their natures, or even their jobs, wouldn't have hurt matters any. Still, I had about as fine a time at Let Him Go as I've had at any cineplex release since March, and was both heartened and relieved to share the experience with so many people – almost two dozen of 'em! – who seemed to be having just as much fun, even if it was, on occasion, nerve-wracking, emotionally devastating fun. It might be a long while until movie theaters are again crowded places to be. A steady release of movies as good as this one, though, will at least make them more satisfying places to be.