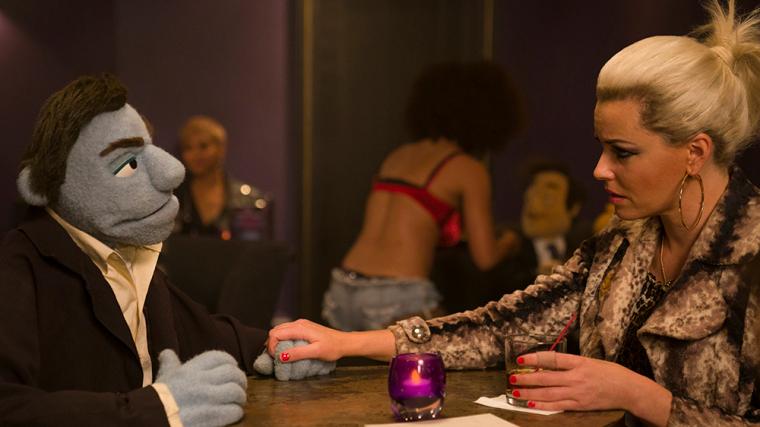 Elizabeth Banks in The Happytime Murders

The novelty of puppets – or, in the case of Team America: World Police, marionettes – cursing and boinking and excreting was already mostly worn out by the mid-aughts, at which point Crank Yankers was midway through its five-season run and Broadway's Avenue Q a mainstream, Tony-winning hit. So The Happytime Murders was probably doomed from the start, given that its central joke, and only truly sustained joke, finds humans interacting with puppets in possession of brazenly filthy mouths, active libidos, and a wild excess of body fluids. As comic conceits go, that one's definitely a yawn. Astoundingly, though, and despite its considerable flaws, the movie itself isn't terrible – or at least, nowhere near as terrible as you may have heard.

Its narrative reminiscent of Who Framed Roger Rabbit's, director Brian Henson's slapstick noir finds boozy private eye and disgraced former cop Phil Philips (a puppet voiced by Bill Barretta) investigating a series of puppet killings with the aid of his bitter ex-partner Connie Edwards (a human played by Melissa McCarthy). And unless you're the type that reflexively cackles at the dropping of commonplace expletives, especially when they're coming out of the mouths of characters made of felt, you're almost duty-bound to find director Brian Henson's gross-out comedy insufferable both for its out-of-date “edginess” and its profoundly juvenile gags. Adding to this, the running motif of puppets being treated as second-class citizens – a sociological metaphor delivered with unbecoming laziness – grows tiresome long before the halfway point. Scenes involving a puppet porno shop and a biological explosion of Silly String last so long that your initial shock morphs into bored irritation. Middle-school yuks of the “A homo says what?” variety get trotted out with embarrassing frequency. Ben Falcone shows up, as he's apparently contractually obligated to every time wife McCarthy makes a movie. Plus, if you still hold an unshakable affection for Sesame Street and The Muppet Show the way most adults I know do, you might hate the film all the more for being directed by the son of Muppet pioneer Jim Henson, whom one can imagine rolling over in his grave at the debasement of the family name. (His son's movie has already received “worst of the year” acknowledgment by the likes of Rolling Stone, the Washington Post, and Vanity Fair – and it's only August.)

Here's the thing, though: I laughed way more often that I thought I would, and certainly more often than I feel comfortable sharing. Every cell of my being knows that Henson's outing is crass, crude, frequently childish, and not worth the considerable effort extended toward making it. (The film's best sequence, in truth, is the end-credits montage showing the hard work behind seemingly simple effects pulled off through a blend of puppeteer magic and green-screen wizardry.) But to misquote Emily Dickinson – or, more awkwardly, Woody Allen – the funny bone wants what it wants, and mine obviously wanted Barretta's hilariously dry gumshoe readings, and Maya Rudolph as a devoted gal Friday named Bubbles, and Elizabeth Banks as a past-her-prime pole dancer. As well as, I'm less inclined to admit, a swinger puppet torn to cottony shreds by a trio of adorable puppies. And McCarthy, on a sugar high, beating the crap out of a roomful of heat-packing puppets. And Phil Philips trying to wrest his way out of an ice cooler. And a deservedly violent reaction to hearing “That's What Friends Are For” on the radio. And, most embarrassingly, the sight of two slow-witted children of married puppet cousins – one with three eyes and one with one. Like a lot of The Happytime Murders, the sight ain't pretty. But it's pretty damned funny. 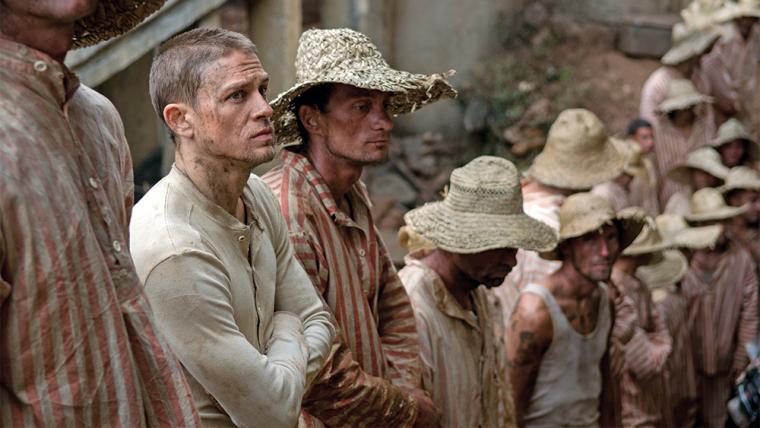 Back in the early '80s, the dramatic thriller Papillon – a 1973 hit for Steve McQueen and Dustin Hoffman that found two prisoners, in the 1930s, attempting to escape from penal colonies in French Guiana and Devil's Island – seemed to be on HBO so often that I'm still not sure whether I actually saw the movie or merely saw its previews every few hours. And if it weren't for Charlie Hunnam, the lead in Michael Noer's new Papillon remake, I'm not sure I'd remember seeing this one, either, a few years down the road.

Unrelentingly grim yet inescapably generic, this blandly directed take on career criminal Henri Charrière's memoir is like a more brutal Shawshank Redemption without the uplift and humor or a less pious Unbroken without the aggressive sanctimony; in other words, just like numerous other works of its type without the qualities that, for better or worse, made them distinct. Aaron Guzikowski's script, meanwhile, would win some kind of award if citations were handed out for Most Blatantly Expository Dialogue. (“You're a hell of a safe-cracker.” “I can't believe they gave you a life sentence.” “They framed you for murder.”) Still, as much as you may wince at the violence and conversation, this Papillon is easy enough to sit through, because while it's only a so-so prison flick, it's at least a first-rate buddy-love flick. Rami Malek, although too physically and vocally mannered, employs his singular, whizzing-brain focus to make forger Louis Dega's desperate need for Hunnam's protector Henri entirely credible. And Hunnam himself is, as usual, a low-key marvel, so magnetic and emotionally present that he easily pulls off the film's centerpiece acting challenge – a nearly half-hour stretch in which Henri, slowly going mad in solitary confinement, doesn't utter a word. As commanding as he's been in projects ranging from The Lost City of Z to King Arthur: Legend of the Sword to TV's Sons of Anarchy (with a special shout-out for his comic sweetness on Judd Apatow's short-lived sitcom Undeclared), it feels unfair that Hunnam isn't yet a popular star given his talents, charisma, and matinée-idol looks. But here's hoping he still might be. Chris Hemsworth can't play Thor forever, right?