Now You Don't See Him, Now You Do: “The Invisible Man” and “Seberg” 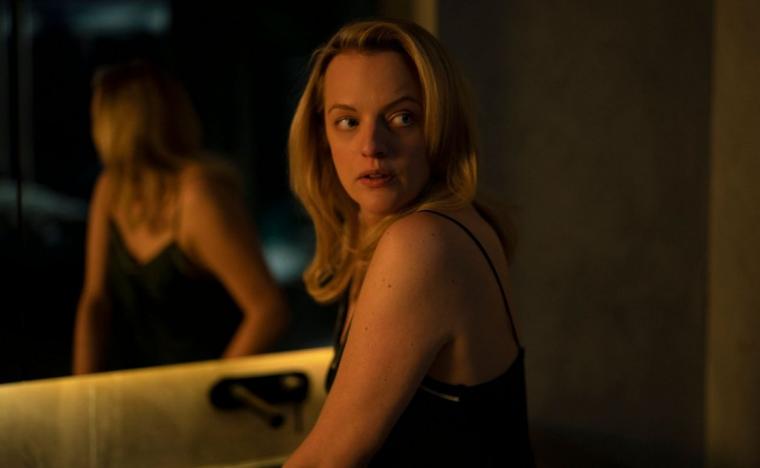 Elisabeth Moss in The Invisible Man

About halfway through Leigh Whannell's new take on The Invisible Man, there's a scene that could have been truly, if inappropriately, hilarious. In it, our protagonist Cecilia (Elisabeth Moss), the long-suffering girlfriend of the titular abuser, has her first violent altercation with her mad-scientist ex after he has found a miraculous way to make himself unseen. Fighting off her invisible assailant by squirming on the floor and pounding her fists, Cecilia resembles a grown toddler throwing a temper tantrum, and when she throws kitchen objects at the instigator of her attack, they shatter upon impact, seeming to explode in the “empty” air. Shot in one long, unbroken take, the sequence is unbridled horror slapstick, and objectively speaking, and despite the vicious ugliness at its core, it should be funny stuff – a physicalized expression of the inherent ridiculousness in material much updated since the 1897 publication of H.G. Wells' original sci-fi novel.

Yet in Whannell's and Moss' hands, there's absolutely nothing funny about this scene of home invasion and violation, nor should there be. The images themselves, with Cecilia's struggle suggesting a pantomimed improvisation in a grad-school acting class, may be fundamentally silly. From the start, though, The Invisible Man's writer/director and star do such a stellar job convincing you of the title character's three-dimensional existence – his vengeful, suffocating presence and what it means for Cecilia – that there are no giggles to be had even when the plotting turns ludicrous. You may not know precisely where the woman's tormentor is at any given time, but damned if you're not convinced that you can see him anyway, and in a movie suffused with genre pleasures, Whannell's and Moss' combined ability to make invisible terrors visible has to stand as its biggest one.

Beginning with its tense, anxious prologue that finds Cecilia literally prying herself from the arms of her lover Adrian (Oliver Jackson-Cohen) and quietly escaping their oceanfront home that has become a glass-encased prison, this Invisible Man revels in the notion that what we can't see is infinitely scarier than what we can. This, of course, has been eternally true in thrillers and fright flicks; Jaws and Psycho are never more suspenseful than when the Great White shark and Anthony Perkins' mother are nowhere in sight. And Whannell leans hard into this idea by routinely framing Moss in shots implying that the unseen horror is right there if only she, and we, knew where to look. Even when Cecilia, early on, is theoretically out of danger, having been driven to the home of her best friend James (Aldis Hodge) by her fiercely protective sister (Harriet Dyer) and learning of Adrian's apparent suicide, Whannell's camera surrounds the woman with crushingly oppressive vacant space suggesting that something else, something we can't see, must be taking up that extra room. (On a couple of occasions, cinematographer Stefan Duscio even slowly scoots the camera away from our lead mid-scene in order to land and linger on … nothing … before its focus gradually slides back to Cecilia.) Like many long-abused women, I presume, Cecilia feels neither safe nor alone even when all evidence points to the contrary. Whannell's Invisible Man, a work unmistakably of the #MeToo era, gives justification – if genre-oriented justification – to those wholly understandable feelings of fear and paranoia. 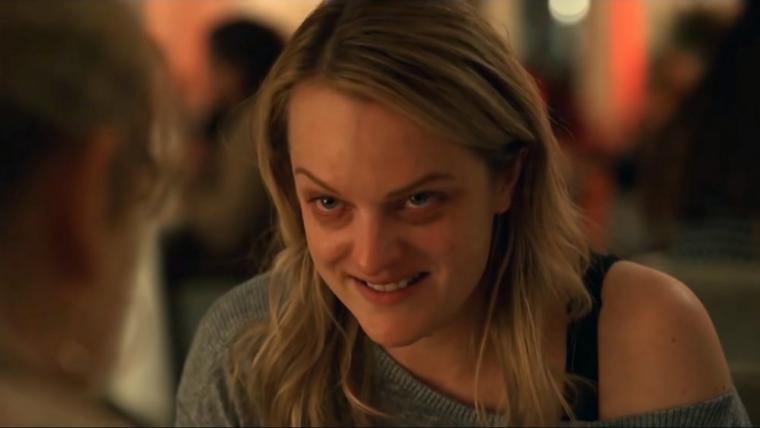 Barring some relaxed byplay between Cecilia, James, and the man's college-bound daughter (Storm Reid), there isn't much lightness or levity in the film, and between its seriousness of intent and undeniable allusions to troubling real-life issues, it's easy to see how Whannell's outing could forget to be fun. Thankfully, though, it still is – at least if your idea of fun sometimes means having your nerves on edge for roughly two hours. While the much-adapted material (and certainly this particular release's promotion) makes the invisible man's eventual re-“appearance” a delayed inevitability, Whannell still gooses our fears with enjoyable flourishes: the creepy untrustworthiness of Adrian's executor brother (Michael Dorman); Cecilia's dog staring and barking at the open air; the spine-tingling image of a knife seemingly leaping off a counter yet making no noise as it hits the floor, because it doesn't hit the floor. And when the attacks come, with Cecilia hardly the last of those enduring victimization, they're delivered with sensational urgency and cleverness, with the off-kilter camera spins mirroring the topsy-turvy scenarios. Especially given the reported $9-million budget, there's a witty intelligence to the movie's visual design – a trait also showcased in Whannell's underrated human-cyborg thriller Upgrade – and despite a few plot holes that you could drive trucks through, The Invisible Man's helmer mostly keeps the narrative foolishness at bay in ways he mostly couldn't in his scripts for the Saw and Insidious franchises.

That task was no doubt made easier by the casting of Moss, a performer who might be impervious to foolishness, and who provides Whannell's achievement with the pulsating heart it desperately requires. While all of the film's portrayals are first-rate, it's Moss who supplies the immediate empathy and continued rooting interest – her face, as always, a direct looking glass into her character's soul, and Cecilia's blend of debilitating unease, potential madness, and staunch refusal to let Adrian win masterfully communicated through Moss' overwhelming emotional transparency. She's a dream of a ravaged horror-flick heroine here, and even if you've been wowed by Moss' talents in The West Wing, Mad Men, The Handmaid's Tale, The One I Love, Us, Her Smell, et al, she manages to astonish anew in this fairly populated entertainment that's oftentimes inseparable from a one-woman show. You may find your eyes drifting toward what you can't see in The Invisible Man, but its star sure makes it tough to want to look at anything other than her. 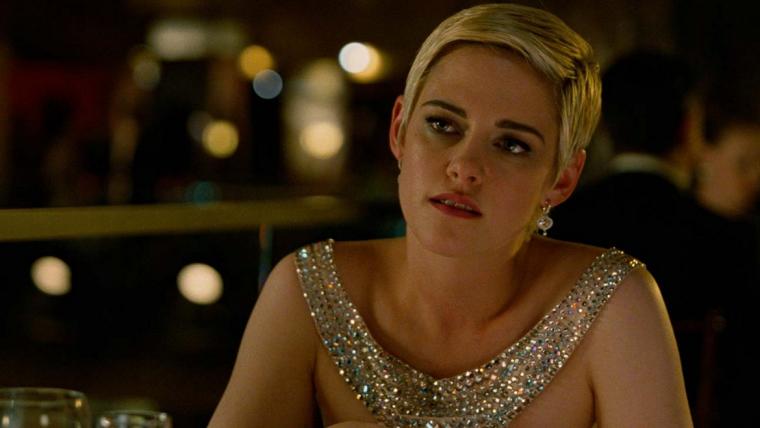 For those willing to consider Kristen Stewart a frequently first-rate actor – and plenty of people I know don't – she can be a remarkably frustrating one. She'll go from moony and borderline-absent in the Twilight series to thunderously present in Clouds of Sils Maria and Still Alice and Personal Shopper; she'll be a great-looking non-entity for Walter Salles (in On the Road) and Ang Lee (in Billy Lynn's Long Halftime Walk) and then bring surprising bravado to a project as stupid as this past January's Underwater. Amidst all this, she'll play Snow White and one of Charlie's Angels and appear in three comedies opposite Jesse Eisenberg, and you never know whether you'll get the affectless, somnambulant Stewart or the focused, searching one. Both of these Kristen Stewarts, it turns out, show up for director Benedict Andrews' Seberg, and taking notice of which one shows up for which particular scene proves more arresting than anything else in this occasionally involving, largely disappointing bio-pic in thriller form.

Although its title figure is the French New Wave screen icon (and Marshalltown, Iowa native) Jean Seberg, a talent best known for Jean-Luc Godard's Breathless, Andrews' and screenwriters Joe Shrapnel's and Anna Waterhouse's Seberg only teases us with snippets of her cinematic legacy: a quick flash to the severe burning she suffered while filming Otto Preminger's Saint Joan; an ultimately successful audition for the notoriously awful musical Western Paint Your Wagon. (Sadly, there's no scene here of Seberg crooning alongside Clint Eastwood and Lee Marvin, which would have at least provided a few laughs in this determinedly laugh-free endeavor.) Instead, the film's focus is on Seberg's FBI intimidation and harassment in light of her growing civil-rights activism in the late-'60s and early '70s, a choice that proves as maddening as it is initially intriguing. 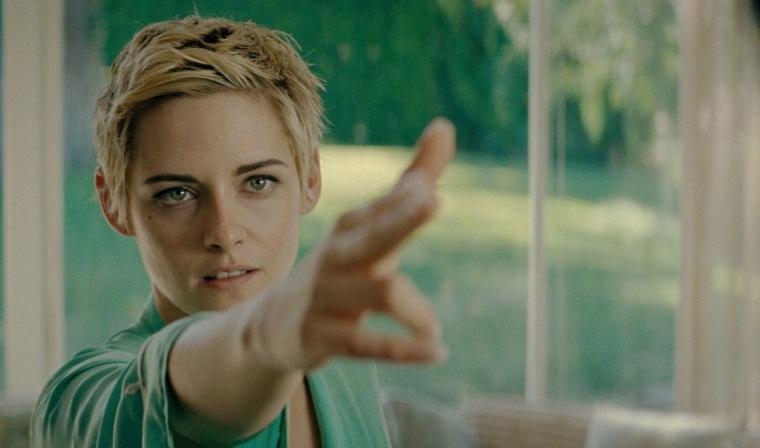 The details of this horrific governmental assault – one that likely caused Seberg's crippling, decade-long depression and may have led to her 1979 death at age 40 – are most certainly fascinating. What isn't is nearly everything surrounding its presentation. For one thing, the character of Seberg's lover, civil-rights activist Hakim Jamal, has been given amazingly short shrift, with so little attention given to his cause that the man's gifted portrayer Anthony Mackie is forced to spend most of his screen time muttering concern over the welfare of a rich white lady. (The great Zazie Beetz, as Jamal's wife, is similarly ill-used.) But even more bothersome is the movie's focus on a fictional creation: Jack O'Connell's FBI agent Jack Solomon, whose journey from dutiful G-man to disillusioned Seberg ally is treated with a gravity equal to the arc of the film's protagonist. Did this work designed to shine light on Seberg's real-life tragedy really need to devote quite so much attention to the banal, predictable exploits of a made-up character? And while it's always a delight to see her, did Margaret Qualley – who, to be fair, gives the film's loveliest, most sustained performance – really need to be recruited for the thankless role of nagging spouse who whines that her husband's FBI duties are keeping him from showing up to dinner on time?

It's entirely possible that Stewart was aware of Seberg's many failings, too, because whenever her material veers toward the lame, she visibly appears to stop caring about it. The star conveys next to nothing when trapped in clichéd encounters, spouting clichéd dialogue, with Mackie's Jamal and Yvan Attal as Seberg's husband Romain Gary, and while Stewart looks devastatingly beautiful in her short-skirted period outfits courtesy of costumer Michael Wilkinson, she spends too much of the movie as a statuesque blank – a paper doll whose expression doesn't change no matter what outfit is placed on her. Yet once Seberg begins to unravel, Stewart's eyes start to burn with desperation and panic, particularly when she's alone on-screen, and the criminal injustice perpetrated on Seberg incrementally reads as legitimately harrowing; Stewart convincingly portrays the inner disintegration of a woman doing her damnedest not to disintegrate in public. In the end, Seberg's leading lady delivers a brave, memorable, almost fearsome performance – but only after a first half that leaves you wondering whether she has the energy to give a performance at all.