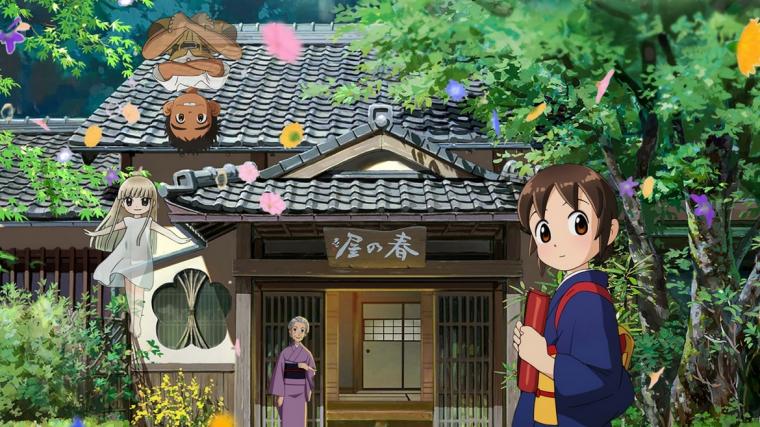 Screening locally through a special partnership between Fathom Events and distribution company GKIDS, the new anime entertainment Okko's Inn will enjoy April 22 and 23 presentations at Rave Cinemas Davenport 53rd 18 + IMAX, the latest work by lauded director Kitarô Kôsaka praised by Pittsburgh magazine for its “easy and very watchable charm,” and by the Pittsburgh City Paper for its “fantastical elemets” and “heartfelt lessons on family and acceptance.”

After losing her parents in a car accident, the titular young heroine of Okko's Inn goes to live with her grandmother, who runs a traditional inn on the Japanese countryside. While she goes about her chores and prepares to become the inn’s next caretaker, however, Okko soon discovers the place rife with spirits that only she can see – welcoming ghosts who keep Okko company, play games with her, and help the girl navigate her new environment. The inn's motto is that it welcomes all and will reject none, and this credo is put to the test as guests challenge Okko's ability to be a gracious hostess, with our curious and thoughtful protagonist ultimately discovering that dedicating herself to others is the key to taking care of herself.

The latest feature from famed anime studio Madhouse, Okko's Inn blends immersive, idyllic landscapes with storybook charm, delivering a rare ghost story that is firmly grounded in the trials and joys of humanity. In its Davenport presentations, the film be presented in both subtitled and English-dubbed versions, with both screening featuring an exclusive introduction from director Kitarô Kôsaka. The helmer of such Japanese features as Nasu: Summer in Andalusia and Nasu: Suitcase No Wataridori, Kôsaka was also a key animator on numerous classic films at the venerable Studio Ghibli, with his credits including such beloved works as Princess Mononoke, the Oscar-winning Spirited Away, and the Oscar-nominated Howl's Moving Castle and The Wind Rises.