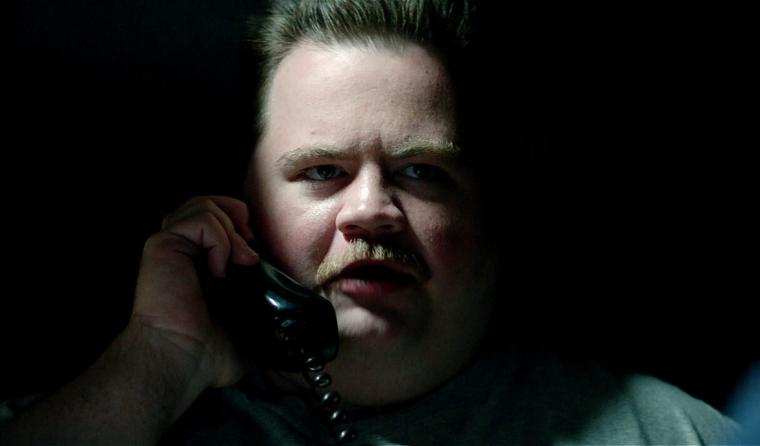 The best thing about Clint Eastwood's new bio-drama Richard Jewell is, thankfully, Richard Jewell himself, or at least the version of him as played, in a sensational breakthrough performance, by Paul Walter Hauser. Three years ago, Eastwood selected for his titular protagonist a middle-aged airline pilot so unimpeachably brave, principled, and decent that the casting of Tom Hanks in the role was almost redundant. Hauser's Jewell, meanwhile, may share many of Chesley “Sully” Sullenberger's finer qualities, but otherwise he's the man's polar opposite: an obese, talkative 30-something with an off-putting manner and his mother as a roommate. He is, in other words, no one's idea of a traditional movie lead, and while Richard Jewell has a lot of hugely bothersome flaws, its choice of hero is definitely not among them. True heroism, it never hurts to be reminded, takes all forms.

In July of 1996, Jewell was serving as a Centennial Olympic Park security guard in Atlanta, parading the grounds for concertgoers at the summer Olympics. It was Jewell who noticed an abandoned backpack stashed under a park bench, Jewell who alerted police to its presence, and, after the backpack was found to be carrying pipe bombs, Jewell who helped clear the area before its detonation. Two people died and more than 100 others were harmed in the explosion, and it's generally agreed, now, that far more casualties would have resulted without Jewell's initial detection and consequent assistance. At the time, though, with no leads as to who may have planned and carried out the attack, the security guard quickly became a chief suspect in the crime – as Jewell himself acquiesces in the film, the person who finds the bomb is always among the first people considered – and a staple of TV- and print-news vilification. (Eric Rudolph was arrested for the attack seven years later.) Written by Billy Ray and adapted from a Marie Brenner magazine article, Richard Jewell is designed to set the record straight: Odd, overweight Jewell was a hero, and the villains were those who rushed to accuse him of being a domestic terrorist. And that would be a perfectly acceptable set-up for Eastwood's latest if, in the movie's telling, those villains weren't just one mustache twirl away from being Snidely Whiplash.

Eastwood's political leanings have been clear for a very long time now (we really don't need another reference to his infamous talking-to-an-empty-chair bit, do we?), and so it's no surprise that the filmmaker would be drawn to the real-life tale of an average Joe undone, at least for a while, by clueless, even malevolent employees of the federal government and the news media. But did these antagonists have to come off as such obnoxious, offensive cartoons? Doing some of the least subtle acting of his career, Jon Hamm telegraphs odiousness as composite-figure FBI agent Tom Shaw, who employs thunderously stupid tactics to evince a Jewell confession and shares privileged information with a journalist in exchange for the promise of sex. And the reporter herself – the Atlanta Journal-Constitution's Kathy Scruggs, who died in 2001 – is played by Olivia Wilde as a vicious, scheming backstabber who not only (it's implied) makes good on her vow to sleep with Shaw, but greets the publication of her front-page “exposé” on Jewell with a malicious cackle worthy of Margaret Hamilton in The Wizard of Oz. Wilde plays this loathsome, media-baiting stereotype (an interpretation of Scruggs that the Atlanta Journal-Constitution vehemently denies) with such icy venom that she's almost enjoyable in the role. She isn't, however, remotely believable, and every time Wilde and Hamm show up, you can be assured that any potential complexity regarding governmental and journalistic motives will be trashed in favor of one-note wickedness. 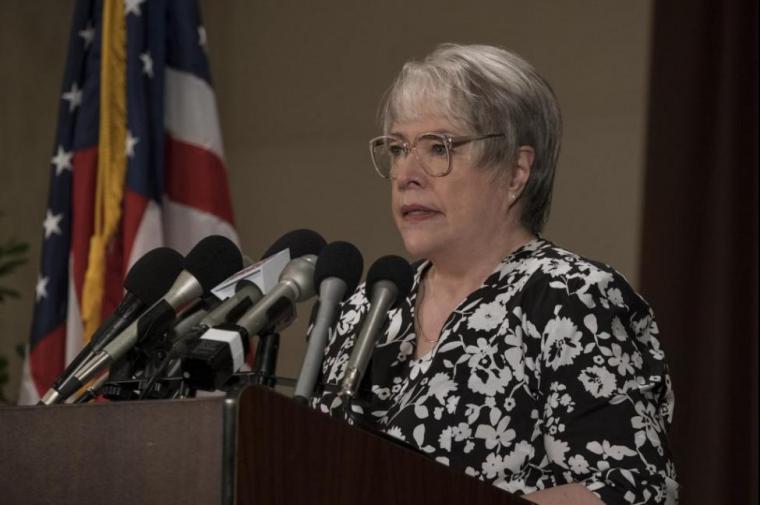 That's especially disappointing considering that the deck doesn't need to be stacked with such braying vehemence, as complexity is built both into Jewell's character and Hauser's portrayal. Best known for playing mouth-breathing, largely comedic oafs in I, Tonya and BlacKkKlansman, Hauser displays previously unimagined depths of feeling here, and he's quietly heartbreaking as Jewell and his mom (a devastating Kathy Bates) are unfairly subjected to public embarrassment and ridicule. Yet the actor is also admirably unafraid of presenting Jewell as something of a weirdo. He talks too much and, to the frequent chagrin of his lawyer and friend Watson Bryant (the topnotch Sam Rockwell), too inappropriately. His conversations are steeped in the humorless earnestness of someone who never realizes he's the butt of every joke. He treats policemen and FBI agents as peers, which only makes him, in their eyes, seem dopier, and guiltier. But he's also stalwart and attentive and brave – a mass of contradictions that form a complicated, utterly real individual whose side you're instinctively on because of how poorly all of his character pieces seem to fit.

If Richard Jewell doesn't come close to being one of Eastwood's masterpieces, it's also not a turkey in the style of last year's two-fer of The 15:17 to Paris and The Mule. It's more like one of Clint's good-within-the-bad flicks, à la Sully. The bad is the villainy and the heavy-handedness and the awkwardness of the setup, which finds both Jewell and his eventual detractors voicing out loud, on the day of the bombing, their desire for something, anything, to happen to make them less bored. (I get the “be careful what you wish for” irony, but when it's handled with this kind of gracelessness, it's no longer irony, just inevitability.) The good is the tension built from the explosion's prelude and composer Arturo Sandoval's low-key score and the presence of the ever-wondrous Nina Arianda as Bryant's gal Friday. (Even if, playing her second Russian in a row after January's Stan & Ollie, I'm starting to forget what Arianda's actual voice sounds like.) And the great, I'm grateful to say, is Hauser's Richard Jewell, a figure eminently deserving of a movie even if the movie itself doesn't come close to deserving him. 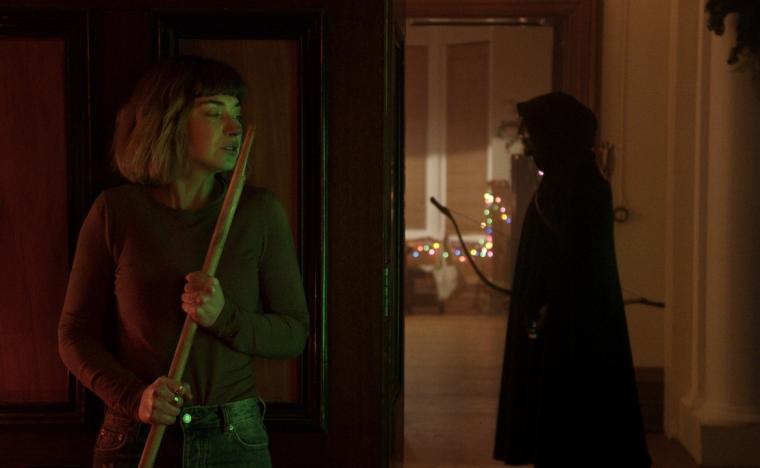 You know that feeling you get when you're at the movies all set to enjoy a trashy horror flick on Friday the 13th, and you gradually realize you're not at a trashy horror flick so much as a grim, grad-school-thesis-project presentation that deconstructs trashy horror flicks through the lens of the #MeToo movement? If so, that might have been you as the only other person at my Friday-afternoon screening of Black Christmas, writer/director Sophia Takal's remake (the second one) of the 1974 sorority-house-slasher-film “classic.”

I take absolutely no issue with Takal's and co-writer April Wolfe's decision to employ the tenets of women-in-peril horror movies to explore and indict college-fraternity rape culture. More to the point: I applaud it. What I do take issue with is that the results are almost no fun at all; a largely and oftentimes enjoyably disreputable genre has been made all too reputable, and the cheesy scares that are about the only things Black Christmas would have going for it are now so weighted with “meaning” that watching the film begins to feel like a particularly hectoring form of punishment. Excepting Cary Elwes' desperately obvious performance as a skeevy professor, the acting (especially by Imogen Poots and Aleyse Shannon) is solid, and at 90 minutes, Black Christmas certainly doesn't have time to wear out its welcome. But there's zero surprise in the narrative and the shocks are PG-13 in the most witless of ways – you may as well be viewing an airline-approved version of Scream with all the gore and jokes snipped out – and the tale's supernatural bent makes no sense at all given Takal's and Wolfe's approach. How can you effectively condemn the mentality and actions of your film's villains when you still allow them to fall back on that timeworn excuse “The devil made me do it”? 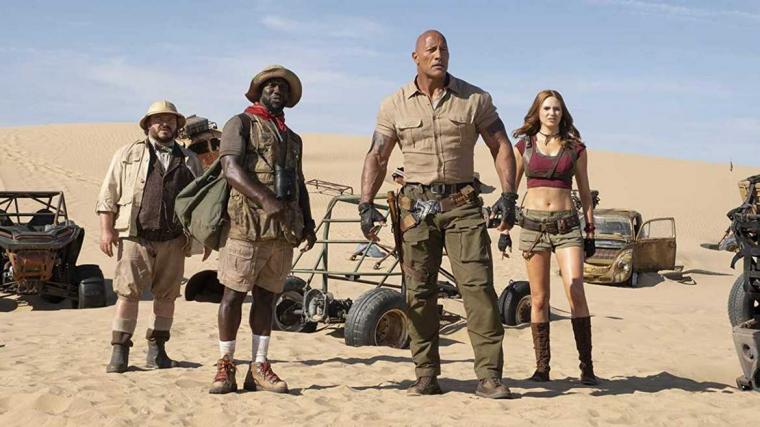 JUMANJI: THE NEXT LEVEL

I'm not sure that much needs to be said about Jumanji: The Next Level aside from the fact that it opened. If you liked the first one – by which I mean the most recent one, as director Jake Kasdan's 2017 monster hit was of course a remake of the seminal Robin Williams adventure comedy from 1995 – it stands to reason that you'll like this one, too. I did like 2017's Jumanji: Welcome to the Jungle and mostly liked Kasdan's follow-up, as well, even if hearing Jack Black speaking in “black voice” isn't nearly as amusing, and is a good deal more problematic, than hearing him talk like a vapid white female teen. (Happily, he does get to do that, too.) But the effects are lively and the humor good-natured and there's a terrific role for Awkwafina as an avatar who goes through several personality-based transmutations. Karen Gillan is again a delight to watch, even if I wish this series let her more frequently show off her comic chops, and it was great to again see Alex Wolff, given that his wrenching performance in Hereditary will forever make me concerned for the guy's emotional well-being.

But if you're a little on the fence about seeing The Next Level, I'll throw out two reasons that you absolutely should. One is Dwayne Johnson's almost movie-length channeling of Danny DeVito, with Johnson finding enormous avenues for laughs in what is undeniably, gloriously, a one-joke role. (I could listen to the actor's Jersey-influenced pronunciation of “Flah-rida” on a loop for hours on end.) And the second, even better reason is Kevin Hart's almost movie-length channeling of Danny Glover. He's a comedic motormouth par excellence, yet I'm not sure that Hart has ever been funnier than he is here grinning with beatific calm and slowing his natural rhythms to quarter-speed, his character so vocally deliberate that the man's meandering reminiscences lead more than one character to their (momentary) demises. Like most everyone, I'd imagine, I'm thrilled that Hart appears to be recovering nicely from his September auto accident. I'll be even more thrilled if, post-convalescence, he decides to take his Danny Glover act on the road. Hell, the tour name writes itself – Kevin Hart: I'm Gettin' Too Old for This Sh--.