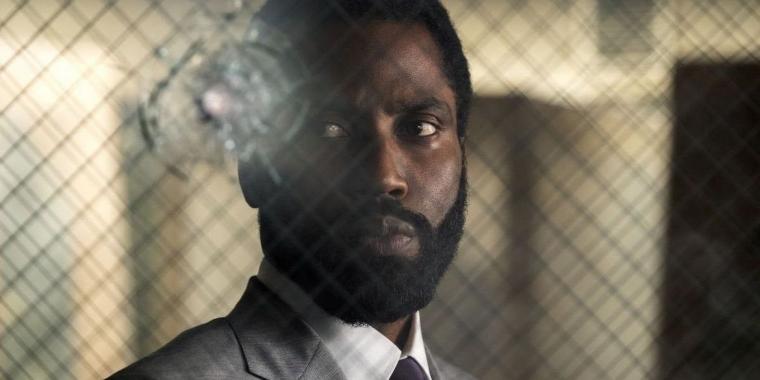 Given its epically convoluted particulars, cagey metaphysics, and dialogue that's frequently (and most likely intentionally) indecipherable, Christopher Nolan's long-awaited action thriller Tenet boasts a narrative that I couldn't spoil even if I wanted to. And I kind of really want to, if only to explain why, after two-and-a-half hours, my brain was practically bleeding from the strain of trying to figure this thing out.

For the most part, I'm okay with movies in which I don't know why things are happening. I may not necessarily understand everything that's going on in, for example, a David Lynch or an Andrei Tarkovsky, but that doesn't mean I can't have fun. What I'm not okay with is not knowing, on the most fundamental levels, what is happening while it's happening. There's a scene in Tenet's final half-hour in which the details of a mission are literally drawn out, step by step, in red Sharpie on a dry-erase board, and I still had no earthly idea what the recruited forces were planning to do, or why they were doing it, or what possible good would result. (Aside from, that is, our armed heroes Saving the World – but only in that generic, meaningless, comic-book way.) And that scene, sadly, isn't an aberration. It's more like a culmination.

Nolan's 2001 masterpiece Memento was a mind-scrambler, too, and so, in their specific ways, were Inception and Dunkirk. (This is where I politely refrain from adding further commentary on Interstellar.) But on a scene-by-scene basis – and, eventually, as a whole – the plotting and character motivations in those offerings made absolute sense. Tenet, though, finds Nolan being willfully perplexing, even impenetrable, and I grew to resent him for so routinely trying our patience for the sake of a few expert set pieces and “How'd they do that?!” visuals that wind up meaning next to nothing. A new Nolan movie is always worth anticipating – never more so than this year. But when, early on in the film, a scientist tells John David Washington's protagonist “Don't try to understand it – feel it,” what it actually felt like was Nolan preemptively forgiving himself, as asking us to forgive him, for his latest not being comprehensible in ways movies inherently need to be for us to at least adequately enjoy ourselves. He shouldn't be automatically rewarded for that ... even if we do kind of need this type of grandly scaled blockbuster entertainment now more than ever.

I should probably back up, as the palindromically titled Tenet oftentimes does, by saying that Washington isn't playing a lowercase protagonist here; in the end credits, and throughout the film, he's referred to only as the capitalized Protagonist. For the sake of your patience and my sanity, I'm gonna keep this simple: The Protagonist is a CIA agent. He learns of an arms dealer (Kenneth Branagh's Andrei Sator) who has found a way to invert time and consequently destroy humankind. With the assistance of his British handler (Robert Pattinson's Neil) and the arms dealer's abused wife (Elizabeth Debicki's Kat), our Protagonist attempts to prevent the apocalypse. Plutonium is involved. So are a number of car chases and, in a possible nod to Nolan's Inception, a pair of mano a mano battles in cramped hallways. Lots of stuff blows up. Action scenes occur in forward and backward motion. This being a Nolan, Michael Caine pops in for a cameo. And as with all of the writer/director's non-Batman flicks, Nolan plays so many tricky, confounding games with the natures of time and reality that Tenet almost begs you to watch it again down the line, this time from a more enlightened, all-seeing, God's-eye point-of-view. Nolan's view, as it were. 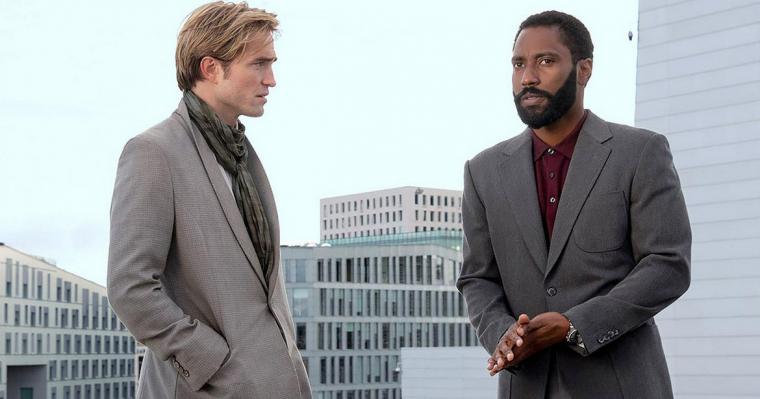 Truth be told, I doubt I'll bother. There are a few exceptional big-budget action sequences – the best being an exquisitely slow one in which a Boeing 747 takes a painstakingly long time to crash into a building near its tarmac. A highway chase involving vehicles speeding and tumbling in both forward and reverse motion is pretty extraordinary, as are the repeats, in the movie's second half, of events that take place in the first, but from different perspectives. As in the 10-year-old Inception, the hallway melees are the finest things about this new movie, too, thanks to Nolan's clever choreography and the genius of editor Jennifer Lame. Despite having nothing in the way of a flesh-and-blood figure to play, Washington is sensationally watchable, and should maybe be first in line when producers start considering replacements for Daniel Craig as James Bond.

Pattinson, meanwhile, has always been outlandishly handsome. Recently, though, in Good Time and High Life and The King and especially The Lighthouse, he's become almost outlandishly charismatic, as well, and might someday be singlehandedly responsible for me returning to Tenet despite my current misgivings. Is it my imagination, or is Pattinson – who provides the film's only true levity, and grins with teasing “I know something you don't” satisfaction throughout – actively flirting with Washington in their scenes together? (And if he is, can you blame him?)

I'm not sure that all this is satisfaction enough even on a first viewing. Ever since The Dark Knight Rises, when most of Tom Hardy's conversation under his Bane mask translated to variants on “Mglmphfghruhdjfjsh,” Nolan's works have been rightly criticized for their muddy sound mixing. (Even if Dunkirk, astoundingly, won an Oscar for it.) But wow does Nolan seem to be going out of his way to make sure we understand as little of Tenet's dialogue as possible. With composer Ludwig Göransson's score assaulting our ears and the aural effects shaking our seats even if we're not sitting in one of those ghastly vibrating cineplex chairs, we would already have a tough time comprehending such basic commands as “Get out!” and “Now!” (On a few occasions, Branagh's heavily accented Russian barks even louder than his accompanying music cues, which is quite the feat.) Nolan, though, ups the ante by also having characters shout over walkie-talkies, and during gunfire, and under face masks like the ones we're wearing just to watch this thing on the big screen, rendering nearly a full third of the characters' verbal communication incomprehensible. I'm reasonably sure someone sitting in my socially distanced periphery could hear me mutter “This is bullshit” through my mask better than they heard most of Tenet's exposition. 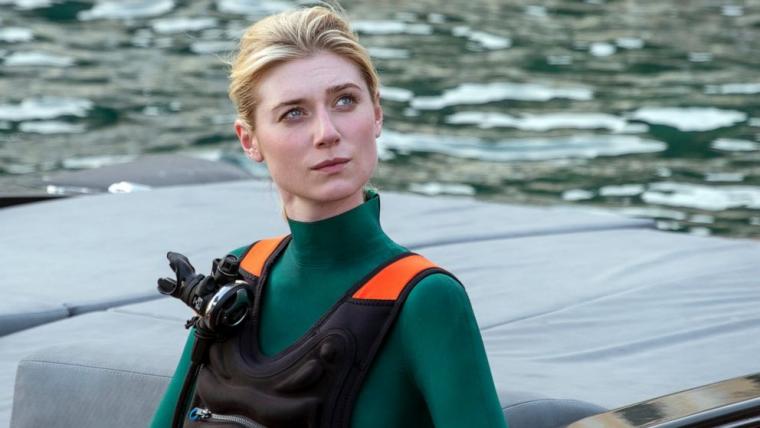 If the film's problems, though, ended with its largely crap sound and unfathomable storyline, I still might've had a pretty good time. Unfortunately, there are so many other problems surrounding those more major ones. Debicki, who's generally a sensationally witty and alert performer (see her in Widows – please), is also perhaps the most statuesque beauty in current cinema; Kat Sator towers over the comparatively runty men surrounding her. Yet in lieu of a personality, Debicki is merely given an estranged son in short pants and knee socks to pine over, and she seems staggeringly miscast as a cowering trophy wife to dumpy, middle-aged Branagh. (Debicki's only solid scene finds her finally exacting revenge on this human turd.) To be fair, Branagh is relatively scary in a Bond-villain sort of way, even if you're bemoaning the tired acting device of his Russian replacing “ing” with “ink” at the ends of words just so we'll know he's Russian. But the two of them – Debicki with her nakedly emotional honesty and Branagh with his well-practiced hamminess – don't appear to be acting in the same movie for an instant, and so despite Andrei holding the fate of the world in his palm, nothing about their relationship, or their relationship in regard to the planet's future, ever seems at stake.

And there are other annoyances. While most of Tenet's action is clearly the result of technical wizardry, some of it most definitely isn't, and the final half-hour features too many shots of extras obviously running backward in real life as opposed to through cinematic magic; these background bits look just as silly as the sight of people running backward always does. The opening scene of theatre attendees being gassed before a shootout should be the film's 007-style pre-credits kicker, but it has no kick, and doesn't have one even when we return to the same scene, in altered form, some two hours later. Our initial introduction to the “inverted time” conceit is, I think, meant to be a mind-bending stunner along the lines of Inception's folding city, but all this protracted sequence made me reflect on was the comparative elegance of that film's climactic spinning top. And while I know no one goes to a Nolan film for the talking (just like we don't go to a James Cameron film for the talking), the auteur just might have benefited from a writing partner – frequent sibling collaborator Jonathan, perhaps? – on this one. After being frisked for firearms at one point, Washington's Protagonist actually delivers the one line I was praying he wouldn't: “Buy me dinner first!” Nolan has a 12-year-old son. Was that kid somehow responsible for the movie's dialogue?

So yeah: This one was clearly not for me … and this is coming from someone who adores more Nolan pictures than he dislikes, and more than he's even ambivalent about. And I'd hardly want to dissuade anyone who's been leery about returning to the cineplex to not return to one for the first Christopher Nolan in three years. Tenet, though, is a slow burn that entirely fizzles out, and its 150-minute running length winds up feeling like an eternity. If that's yet another bit of time-trickery on Nolan's part, I gotta say, it wasn't a trick I enjoyed.