Party with a Purpose: “The Boys in the Band”

THE BOYS IN THE BAND

Despite the bitchiness and anguish inherent in the material, Netflix's new streaming version of The Boys in the Band is one of the very few releases of the last six months, perhaps the only one besides The Personal History of David Copperfield, that feels absolutely suffused with joy. You won't necessarily find it in the characters, and certainly not in most of the things they say and do. But as a filmed reunion for the cast and director of Broadway's 2018 Tony Award winner – a revival of playwright Mart Crowley's iconic examination of urban gay life in 1968 – there's so much love baked into the presentation that you might find yourself grinning even when situations are at their most dire, and they frequently are. Director Joe Mantello's adaptation drips with resentment, recrimination, and venom. It's also bighearted and buoyant and gracefully, nearly exultantly alive – a tale of figurative and literal confinement that comes to seem liberating as hell.

How often, after all, are viewers treated to what The Boys in the Band delivers: a funny, moving, complicated entertainment by a gay author and gay director composed entirely of gay characters (plus one potentially closeted one) portrayed entirely by out-and-proud gay actors? Fifty-two years ago, when the play debuted, this would have been unthinkable. In 2020, it's “merely” novel, and inspiring, and long overdue. Centered on one of the most uncomfortable birthday parties in stage history, Crowley's saga also boasts one of theatre's easiest-to-summarize narratives as a group of Greenwich Village friends gather for a celebration and it quickly turns to shit.

The party's host is Michael (Jim Parsons), a guilt-ridden Catholic with a hangdog expression and an acidic tongue. The birthday boy is Harold (Zachary Quinto), a self-described “32-year-old, ugly, pockmarked, Jew fairy” with a louche demeanor and a compulsion for truth telling. The guests, meanwhile, include Michael's boyfriend Donald (Matt Bomer), the squabbling couple Larry and Hank (Andrew Rannells and Tuc Watkins), cruising singles Bernard and Emory (Michael Benjamin Washington and Robin de Jesús), and a $20 hooker (Charlie Carver) rented for the occasion. Oh, and not invited but there anyway is Michael's straight college roommate Alan (Brian Hutchison), who shows up drunk and in desperate need to talk, and speedily realizes he's picked the worst possible night to do so. 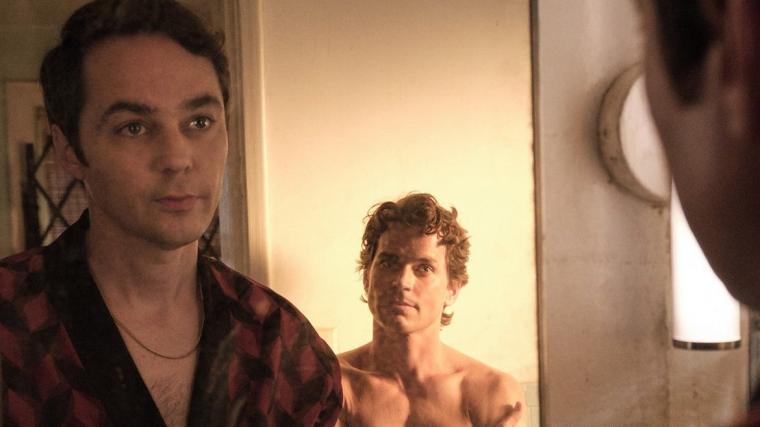 When it was first produced, The Boys in the Band was a considerable sensation that ran in New York for more than two years and inspired a 1970 William Friedkin movie that, like this one, reassembled its stage version's original cast. And with only minimal changes made to the source material (Ned Martel is now credited as a co-screenwriter), there are times, or more accurately lines, in Mantello's Netflix production suggesting that maybe these Band-mates should have been left well enough alone.

Although the script retains the play's time frame, and the production and costume design are marvelous on that front, too much of the dialogue feels coated in mothballs; for considerable stretches, it doesn't sound as though characters are talking in 1968 so much as they're talking in a 1968 play. Their incessant banter is routinely smug and tiresome in that early-Neil-Simon manner, where sentiments appear delivered merely because the playwright found clever punchlines to act as punctuation. Some of the specific plot elements, too, are eyebrow-raising in their artificiality – not because you're thinking “I can't believe people ever acted that way,” but rather, “Did people ever act that way?” Because he mistakes the man for straight, it sort of makes sense when Alan, looking for any excuse to leave, asks Hank to join him in solidarity and ditch this caustic crew of frenemies. Does it make sense, though, given that Alan has known Hank for all of 10 minutes before making this proposal? Wouldn't Alan, despite being soused, consider that maybe Hank wasn't necessarily tricked and was instead there for a reason? (Or is that simply my 2020 reaction to a 1968 truth?)

Much of The Boys in the Band is over- or awkwardly written in this fashion, and the lines that thud can't help but dull the movie's effectiveness. Excepting the overly passive (and consequently kind of forgettable) Bomer, though, the actors play their material with so much relish it may as well be a Chicago-style hot dog. All of them, even Bomer, are excellent in their rapid-fire repartee, and Mantello clearly knows how to position the camera for maximum enjoyment of their routines, particularly when members of the group slide effortlessly into a lightly choreographed rendition of Martha & the Vandellas' “Heatwave,” the one moment in which legitimate joy is evident rather than implied. But with the introduction of the script's most overt plot device – a mean-spirited game, initiated by Michael, in which every party guest is required to call the person they adore most in the world and tell them “I love you” – Mantello's performers begin hitting artfully aching notes of self-loathing and emotional honesty that their previously appealing presences haven't quite prepared you for. Stage monologues recounting shameful or hurtful moments from characters' pasts are pure catnip for actors, and Mantello's devour those morsels and unsparingly ask for seconds.

Fans of The Book of Mormon (and HBO's Girls, and Netflix's animated Big Mouth) know that Rannells is a treasure. Yet even this longtime admirer was knocked out by his gay lothario Larry coming to terms with the man he claims to love actually being the man he loves; Rannell's reading of “It's for you, Hank!!!” might well be the finest dramatic and comedic reading of the actor's screen career. Washington and de Jesús, playing minorities within a group of minorities, have devastating moments of self-reflection and tortured acceptance. (Mantello augments their remembrances with elegant, surprisingly not-intrusive flashbacks.) Watkins gives us unparalleled decency. Hutchison gives us appalling, knee-jerk hatefulness and buried turmoil. Carver, who's like Matt LeBlanc's Joey Tribbiani reincarnated as Jon Voight's Midnight Cowboy hustler, gives us laughs – lots of 'em. Taking on the formidable task of bettering Leonard Frey's Harold in the Friedkin version, Quinto instead positions himself right next to him, and with his voice and bearing oozing contempt, pity, and deep love in equal measure, Quinto creates a figure unlike any I've seen before; he somehow makes languid cattiness electrifying. (Quinto also gets a spectacular entrance, with Mantello's compositions telling us everything we need to know about Harold before his face is ever seen.)

It's Parsons, however, who emerges as the true show-stealer – though, to be fair, his castmates appear more than happy to concede their claims to the title whenever he's around. Michael is an intensely tricky role: so helplessly acerbic, so obvious in his quest to please people, so filled with shame and disgust and envy that you can't ever tell if we're meant to root for Michael or root for the others to kick the crap out of him. Parsons, though, shows us that it doesn't have to be either/or; he, Mantello, and Crowley understand that you can want to murder someone at the same time you want to wrap him in a gi-normous bear hug. Michael is insufferable, but he's endearingly insufferable. And despite the late playwright's sit-com leanings, Crowley's writing is frequently powerful on a gut-punch level, especially when his “boys” begin revealing truths they'd have preferred never to have shared. No one's party mask is stripped away quite like Michael's, and in revealing the saddest, ugliest aspects to his character, Parsons' astounding life force is revelatory. Those who've loved him forever, and maybe only, as The Big Bang Theory's Sheldon might have no idea what they're getting into here. But they'll likely be glad they got there.

Mantello's entire team appears glad to have gotten there. Though deservedly legendary for plenty of understandable reasons, The Boys in the Band is still moderately shaky as drama. But when Michael, in the final minutes, delivers the show's ultimate mission statement – “If we could just learn not to hate ourselves quite so very much … ” – the undeniable importance of the messaging blends with the first-rate presentation and performance in a way to leave you shaken. Its sentiment in 2020 in clear: This is who we were. This, for many, is who we still are. And this is who, one day, we can perhaps both still be and, with perseverance and empathy and luck, never have to be again.