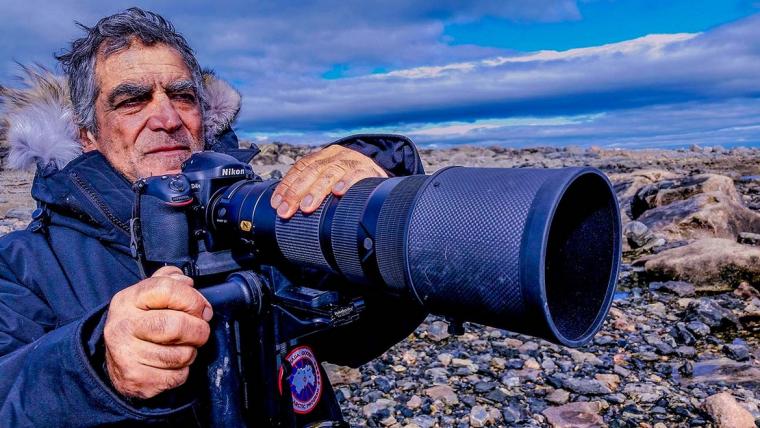 "Picture of His Life" at the Figge Art Museum -- January 23.

Described by CNN as “amazing,” by the San Francisco Chronicle as “wonderful,” and by the Hollywood Reporter as “a fascinating portrait,” Picture of His Life, the 2019 documentary on lauded underwater photographer Amos Nachoum, opens the 2022 season in River Action's QC Environmental Film Series, this January 23 presentation at Davenport's Figge Art Museum a multiple festival-award winner by acclaimed directors Dani Merkin and Yonatan Nir.

Amos Nachoum is one of the greatest underwater photographers of all time, and as he has been fascinated by the most fearsome creatures on Earth, he has developed a unique photographic approach that puts him face to face with his subjects without any protection. Nachoum swam with crocodiles and killer whales, with anacondas and with great white sharks. But one major predator has always eluded him: the Polar bear. He tried before and barely escaped, but in Picture of His Life, as he nears the end of his career, Nachoum is determined to give it one last shot.  As the journey unfolds, the photographer contemplates the series of unspoken events that drove him to the end of the world – a long and painful journey that found the man serving in an Elite Commando unit and witnessing the horrors of war. But where others find fear, as audiences discover in Picture of His Life, Nachoum finds redemption.

The subject of Merkin's and Nir's visionary documentary, Nachoum has led great expeditions for individual adventurers and institutions including Apple, IBM, Microsoft, Discovery Channel, Armani, Disney, and Colombia Pictures. For National Geographic, he was team leader for separate photo expeditions to document the Red Sea, Great White sharks, and killer whales. Nachoum's photographs and essays have appeared in hundreds of publications around the globe, including National Geographic, Time, Life, the New York Times, Condé Nast Traveler, Le Figaro, Terra Sauvage, Airone, Mondo Somerso, Der Spiegel, Unterwasser, and many more. His work has also been included in the books The Living Ocean, The World of Nature, and Oceans, and Nachoum has appeared on National Geographic Explorer, Today, and Good Morning America, in addition to being featured in People, Esquire, and Money magazines.

And while his photography has won him Nikon, Communication Arts, and BBC Wildlife Photographer of the Year awards, Nachoum loves people as much as wildlife, his concern for both inspiring to co-found Israel’s Marine National Park on the Red Sea. Though Nachoum's interest in conservation began with sharks, he looks to bring attention to the most fragile regions of the underwater realm with preservation of the environment foremost in his mind. His favorite way to raise awareness and stimulate passion for the ocean is to help guests experience it firsthand, and for those unable to join Nachoum on his adventures, he brings the oceans to the world through his photography and public-speaking engagements.

Picture of His Life will be presented at the Figge Art Museum at 2 p.m. on January 23, admission is $5, and more information on the QC Environmental Film Series is available by calling (563)322-2969 and visiting RiverAction.org.