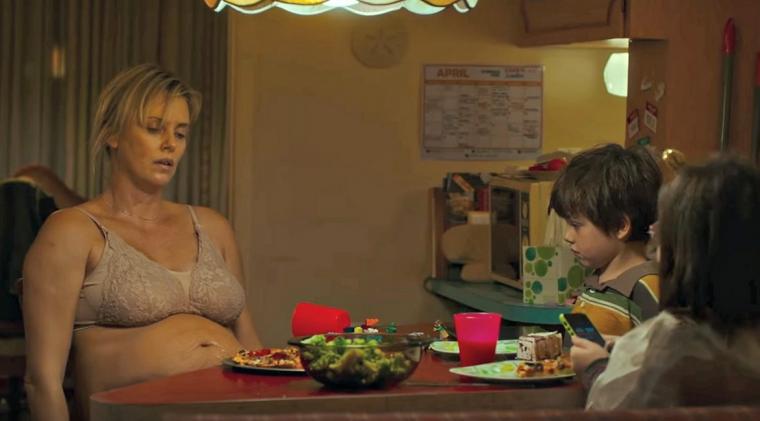 Charlize Theron is nearly always great, and few of her movies have needed her to be great quite as much as Tully, a domestic dramedy that only works – to the extent that it works at all – because of the performer's ferocious, at times truly frightening emotional commitment.

In this third screen collaboration between director Jason Reitman and screenwriter Diablo Cody, who previously teamed for 2007's Oscar-winning Juno and 2011's nasty/funny Theron vehicle Young Adult, their star portrays Marlo, an expectant mother clearly at the end of her rope. “Harried” doesn't begin to describe how overwhelmed Marlo is by life with two pre-teen children (one of whom, although undiagnosed, appears borderline-autistic) and a well-meaning but largely absent husband (Ron Livingston's Drew), and after she gives birth, the woman sinks into a severe postpartum depression. Her suffering is alleviated, however, by the hiring of the frisky, eccentric, 26-year-old night nanny Tully (Mackenzie Davis), and you may consequently expect her arrival to inspire a generically touching, inherently clichéd tale of renewed empowerment, with Marlo – having received much-needed rest and companionship – becoming a Supermom and Superwife with a newfound bestie, to boot. Yet that's not exactly what happens. I feel like an ingrate for kind of wishing it had.

Though the film is still joke-heavy in the Juno/Young Adult manner, Cody deserves props for (mostly) treating her heroine's pain with the gravity it deserves, and God knows Theron plays her role, especially early on, with bottomless sadness. Even when cracking wise, Theron's slumped physicality and red-rimmed eyes suggest premature surrender, and few recent movie moments have been as devastating as the look on Marlo's face immediately post-childbirth, when you don't read relief in her expression so much as abject misery – “What the hell do I do now?” Theron's anguish makes her beaming smiles and uptick in energy, with Tully's arrival, all the more moving, and the spellbinding Davis, playing a variant on Geena Davis' free spirit in The Accidental Tourist, is an exceptional scene partner. Contrived though their relationship may have been, I was actually looking forward to Tully teaching Marlo to love herself and forgive herself and awaken her long-dormant Charlize. 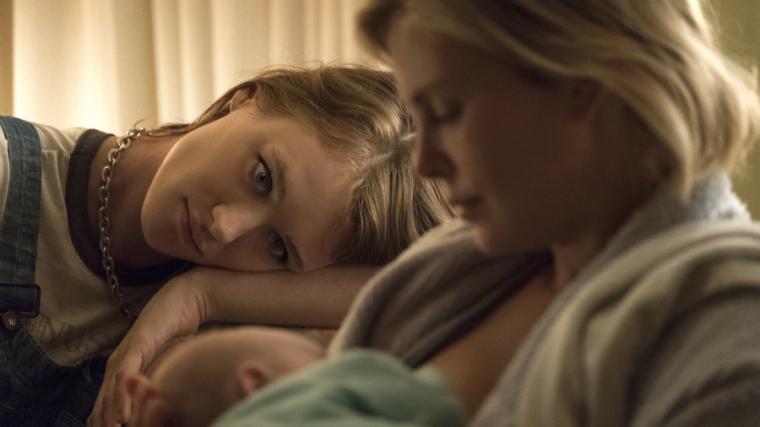 Yet beginning with the film's recurring, pushy mermaid motif, you can sense Cody and Reitman aiming for something more symbolically meaningful than a mere female-bonding scenario, and when this narrative turnaround lands, it lands, sadly, with a thud. I won't spoil the eventual surprise of Tully. But I will say that while it retroactively cheapens everything that came before, it also shifts the material into near-tragic territory that the moviemakers appear unequipped to handle, though their lead most certainly could. (The storyline switcheroo also only works if Marlo's hubby is almost sociopathically lazy and obtuse, which isn't hinted at in Livingston's portrayal of an unmistakably flawed yet fundamentally decent and loving guy.)

Given the strength of the performances – with the ever-underrated Mark Duplass providing a lovely turn as Margo's concerned brother – and the blessed absence of crushing melodrama, it's a pleasure to report that Reitman's latest is at least a marked improvement on his last two releases Labor Day and Men, Women, & Children, both of which were so bad I thought we had maybe lost Reitman to the dark side forever. Happily, we haven't. But the dark side is precisely what Tully appears all too timid about exploring with any real depth, and even the finale that, to me, read as hopelessly grim is treated with kids' gloves – a serio-comic “life is tough but we'll get by” ending unworthy of Charlize Theron's genuine despair. Forget the argument over whether we should be promoting birth control or abstinence with teens. Just show 'em Tully. 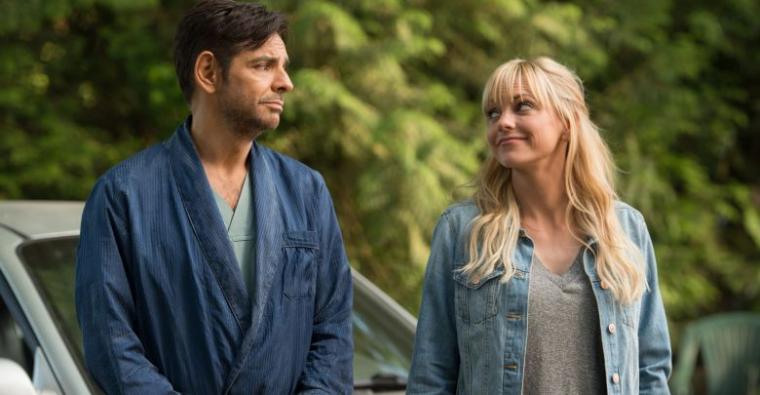 Released in 1987, the Goldie Hawn/Kurt Russell rom-com Overboard is, as my brother and I recently agreed, a weird kind of classic – one of those chipper late-'80s frolics that, like Baby Boom and Adventures in Babysitting, you didn't even have to like very much to enjoy watching a dozen times over on HBO. And while I think one viewing will be plenty regarding director Rob Greenberg's new Overboard remake with Anna Faris and Eugenio Derbez, I still gave in to its minimal yet undeniable charms; the movie is like a needy puppy that keeps licking your face until you finally relent and start giggling.

A gender-swapped take on the original, the movie casts Mexican comedian Derbez as an über-rich asshole who treats struggling single mom Faris abominably, takes a tumble off his yacht, and wakes with no memory of his former life – a situation that Faris cunningly exploits by convincing him that he's her husband and the stepfather to her three daughters. Written by Greenberg, Leslie Dixon, and Bob Fisher, this Overboard is as ridiculous as its forebear, with its goofy plot making even less sense in the Internet age. (Not one person that Derbez encounters notices his resemblance to the missing son of the world's third-richest human?) And it certainly would've been more satisfying if Anna and Eugenio shared anything close to Goldie's and Kurt's chemistry. It's not that they appear unhappy to be playing off one another, it's that they barely seem aware of one another; you could imagine both Faris and Derbez, true equals in the art of mugging, giving these exact same performances regardless of whether their co-star was even in the room. Yet they're still sweet, ingratiating comics who feel perfectly matched to the film's sun-drenched, endearingly unpretentious vibe, and both have delightful individual moments – Faris, whose eyelashes look like they could cut glass, with her wide-eyed relish in making Derbez suffer, and Derbez with his put-upon exhaustion and aghast readings of “Lo-o-ow blo-o-ow!”

While no one will likely mistake this Overboard for any kind of classic, weird or otherwise, it's a peppy and friendly entertainment featuring a winning (and largely Latin American) supporting cast, with Mel Rodriguez earning best-in-show honors among an ensemble that includes Eva Longoria, Josh Segarra, and Swoosie Kurtz. I also dug the one overt callback to the original, when a physician, upon Derbez's hospitalization, says that he's never seen anything like this man's amnesia – “except for once, with that pretty young woman in the '80s.” The gag was only so-so, but the movie earns points for delivering it and not making me wish I was at 1987's Overboard instead. 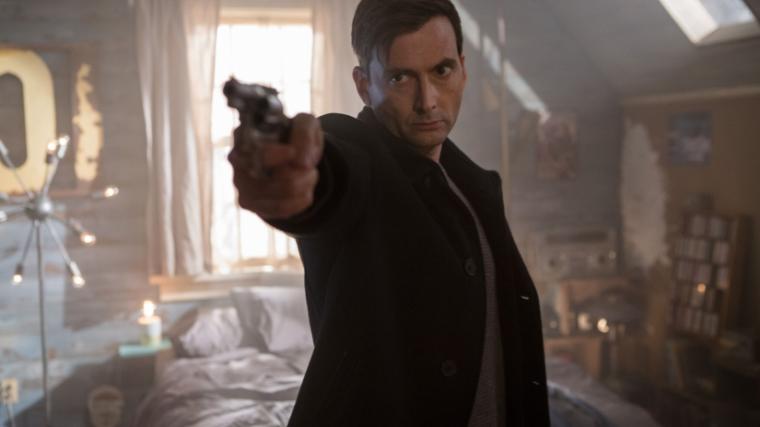 As the serial killer of director Dean Devlin's Bad Samaritan, the marvelous David Tennant gives one of those baroque, slavering psychopath performances in which you can't tell if what he's doing is tremendous or terrible – but trust me, it's terrible. Even when Tennant goes off the rails screaming at his latest victim-to-be and threatening her with a gruesome demise, the young woman gives him a look that can only be read as “Dude, calm down already.” But at least Tennant gives you something to actively focus on (and laugh at) in this noxious, labored, and thunderously stupid thriller – one of those dreadful cat-and-mouse affairs in which you're praying for both animals to be put down as quickly as possible.

Resembling a perfect genetic mash-up of James Franco, Eddie Redmayne, and Timothée Chalamet, Irish actor Robert Sheehan plays an unsuccessful photographer who uses his moolighting gig as a valet to rob customers' houses, and winds up wishing he hadn't after finding a chained-up woman in the home of Tennant's Cale Erendreich – a slick, unfathomably wealthy Christian Grey type who substitutes dismemberment for sex. From the staggeringly senseless plotting to the ludicrous horse-head motif to the Titanic-y penny whistle that underscores the doings of our questionable Celtic “hero,” I hated just about every second of Devlin's sophomore outing as a film director, which proves a considerable comedown from his debut – and his debut was freakin' Geostorm, for Pete's sake. But I hated it most for the insulting waste of Tennant, who at one point is required to make Sheehan's life miserable by hacking the kid's Facebook account – like Facebook isn't scary enough without an Americanized Tennant typing away. The poor guy is even forced into shenanigans involving what must be the two most tired clichés in modern thrillers: the Monologue-ing Killer and the Bomb with the Ticking Red Clock. This latter bit is both clichéd and redundant, as Bad Samaritan itself is a bomb with a ticking red clock.