Its plot is needlessly complicated and its effects are occasionally chintzy and its leads don't display anything in the way of romantic (let alone sexual) chemistry, and Disney's Jungle Cruise is still mostly a hoot – a ride turned into a movie turned back into a ride. Director Jaume Collet-Serra's family adventure may be as self-referential and avaricious as any of the Mouse House's live-action blockbusters, but the film's cheerful spirit and charm prove utterly infectious, and I wound up having more and more fun as the film progressed. While this thing may not hit the manic highs of the better Pirates of the Caribbeans, it's hard not to kind of adore a release that has the wit, at one point, to turn The Rock into stone.

Like most viewers, I presume, I probably would've had a fine time had Jungle Cruise been content to be the African Queen meets Raiders of the Lost Ark hybrid its trailers suggested. Emily Blunt, doing a Katharine Hepburn by way of Karen Allen, plays 1916 botanist Dr. Lily Houghton, who, along with her milquetoast brother MacGregor (Jack Whitehall), recruits Dwayne Johnson's steamboat captain Frank Wolff for an up-river trek through the Amazon in search of a mythical flower with supernatural powers of healing. There are, naturally, impediments on the journey: rapids, waterfalls, cannibals, a German submarine commander with his eyes on the prize. (This obsessive nutjob is perhaps inevitably played by Jesse Plemons, who might be having more fun with a comically exaggerated German dialect than any actor since Cloris Leachman.) Yet because Disney's latest apparently required five screenwriters and/or “story by” contributors and they all apparently needed something to do, there's also a time-consuming, weirdly extraneous side narrative involving the resurrection of a slain 16th-century conquistador (a largely CGI-ed Édgar Ramirez) and his compatriots, one of whom is composed of snakes and the other of bees. Don't remember that in the Disneyland tour.

Then again, I do recall that ride being pleasantly slow moving, which is not a speed Collet-Serra appears at all interested in. Barring the infrequent sentimental detour – and MacGregor's coded confession of his homosexuality is a modestly touching one, if wildly unexpected – Jungle Cruise moves like the dickens, with Blunt and Johnson hastily tossing off wisecracks in between, and usually amidst, the director's admirably kinetic action sequences. He may not possess Gore Verbinski's talent for mousetrap-style slapstick mayhem, but Collet-Serra's three pictures for Liam Neeson (one of which was 2014's rather elegant Non-Stop) obviously had preparatory benefits. The film's pacing is relentless yet never chaotic, and the jokes – especially the skipper's so-bad-they're-awful puns that sound taken directly from the Disney ride – zip by so quickly you barely have time to groan.

It should go without saying that the ever-genial Blunt and Johnson are enjoyable, too, if never quite as amusing as Plemons and Whitehall, the latter of whom is far funnier than the stereotype threatened by MacGregor's bearing and swishy-dandy wardrobe. (Although I smiled a lot during my screening, the only time I genuinely laughed was when Whitehall kept forcing Plemons to repeat his marble-mouthed pronunciation of “jungle.”) I do wish the stars' banter had more Bogie/Hepburn edge and tension; Blunt is always on fire, but has Johnson ever had successful romantic byplay with anyone on-screen? Still, they make an endearing pair, and Jungle Cruise is an endearing spectacle, silly enough to cast Paul Giamatti as a dyspeptic harbormaster and sweet enough to earn its several happy endings. It's a satisfying ride. Glad I was tall enough for it. 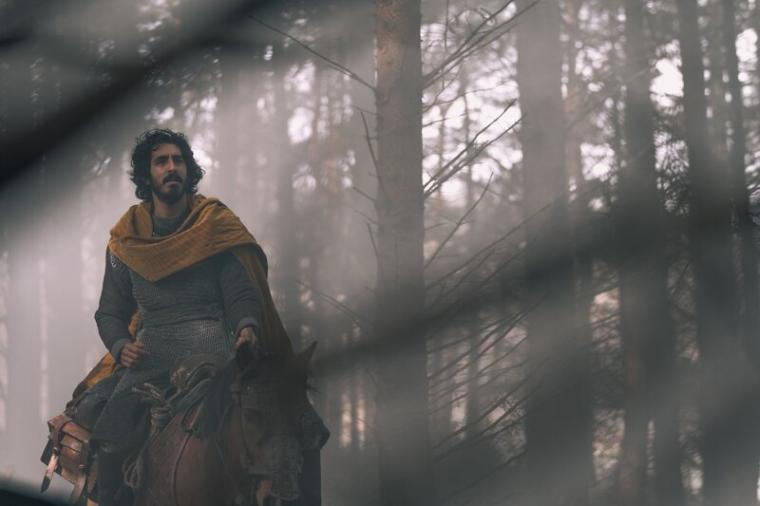 One of the first scenes in writer/director David Lowery's medieval anti-adventure The Green Knight – the scene that sets the film's narrative quest in motion – finds Dev Patel's Sir Gawain at a Round Table feast hosted by his uncle King Arthur (Sean Harris). Before long, we're treated to the arrival of the titular knight, a hulking, ambulatory tree who makes a most unusual challenge, and meets a most unusual fate. It's an odd, evocative, haunting sequence. Yet while it's transpiring, the film-savvy among you may recognize that the knight is played (or perhaps merely voiced) by basso profundo Ralph Ineson, the tortured patriarch of that black-magic freakout The Witch. You may also register that Arthur's wife, Queen Guinevere, is portrayed by Kate Dickie, who was Ineson's equally tortured spouse in The Witch. Lowery's film is barely 10 minutes old, and already we have a pretty strong hint as to what the overall experience is going to be like – and it sure as hell ain't Camelot.

I haven't yet checked in on what audiences, en masse, think ofThe Green Knight, mostly because I'm not quite ready to have my heart broken. But if nationwide response is anything like my alternately hushed and antsy crowd's collective reaction, I'm betting most people ha-a-ated Lowery's movie, and it's not hard to presume why. Deeply meditative, oppressively dark, snail-paced, strange bordering on wacky (A double-cast Alicia Vikander! A talking fox! An unexplained horde of naked giants!), Lowery's Arthurian re-imagining gives you loads to chew on but almost nothing in the way of traditional entertainment, and certainly nothing that summertime audiences accustomed to, say, Jungle Cruise might understandably anticipate. Even its hero, incandescently played by Patel, is a weakling, a drunkard, a coward, a dupe … . The all-around anti-Rock.

Yet if you can get on board with Lowery's deliberate destruction of norms, you might, as I did, find the writer/director's latest absolutely astounding – as enchanting as his 2016 Pete's Dragon, as thematically rich and presentationally unsettling as his 2017 A Ghost Story, and as bizarrely, surreptitiously moving as anything I've seen in years. The Green Knight bends rules, bends expectations, bends time, and never stopped taking my breath away, be it through a horrific battleground of fallen soldiers, a lakeside dive to retrieve a lopped-off head, or a hushed Vikander soliloquy on what the color green actually means. Though based on a 14th-century poem and set in period, The Green Knight is unmistakably modern, and so thrillingly moody and enigmatic that it's bound to piss off as many viewers as it entrances. Either way, I hope you're among them. 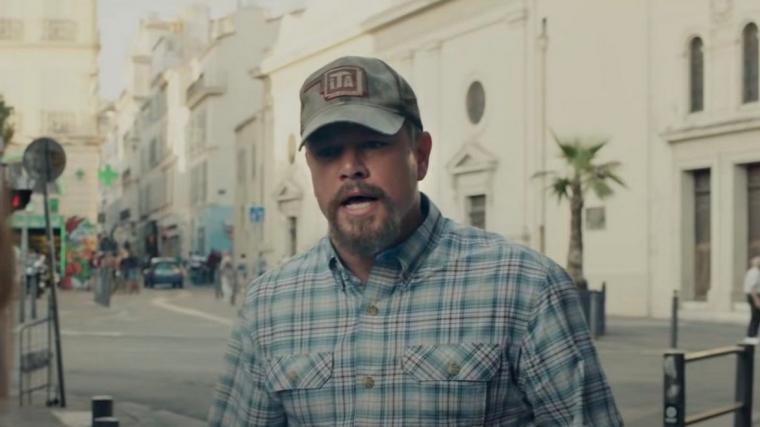 If The Green Knight doesn't slake your thirst for movie heroes who, it turns out, aren't very heroic at all, there's another one on hand in writer/director Tom McCarthy's Stillwater, in which Matt Damon plays a well-meaning regular guy who makes a stupid decision, regrets it, tries to become a better person, and makes an even more stupid, more ruinous decision. Inspired by the real-life, tabloid-magnet story of Amanda Knox, a young (eventually exonerated) American imprisoned in Italy for allegedly murdering her roommate, McCarthy's fictional take sends Damon's Oklahoma roughneck Bill Baker to France hoping to get his accused daughter (the not-entirely-convincing Abigail Breslin) released from jail. Before the film is halfway through its 140 minutes, the guy has failed, critically unprepared as he was to negotiate the country's legal system and realize that 'Murican gumption only gets you so far overseas. Yet the movie remains gripping, if somewhat contrived, to the end, and not merely because of its late-film conceit that finds Baker – much like the star baseball player in Bernard Malamud's book version of The Natural – getting a miraculous second chance and making the same damned mistake all over again.

You could argue that Spotlight helmer McCarthy's drama shoehorns too many narratives into its running length, and you wouldn't necessarily be wrong. Yet none of them were storylines I actively wanted to leave, and barring the rather (intentionally?) vague Breslin, none of them boasted characters I ever tired of. Playing the sort of externally polite, inwardly ferocious man's man whose entire character seemed mapped out in the down-turned baseball cap that nearly covers his eyes, Damon is wholly committed and believable, enacting the prototypical Ugly American Abroad with precise detail whether doggedly tracking down leads or enduring a harsh browbeating from his daughter. (He's such a recognizable type that when a Frenchwoman asks Baker if he voted for Trump and he says no, you're momentarily shocked – until he mentions that, as a convicted felon, he can't vote.) Moussa Maaskri is subtly wily and supremely confident as a detective who refuses his services to Baker but eventually capitulates – after which Baker really wishes that the no had stayed a no. And while the fish-out-of-water and crime-thriller aspects of Stillwater are commendable, the movie's most successful passages involve the makeshift family Baker forms with the magnificent Camille Cottin as a kindhearted theatre artist and Lilou Siauvaud as her adorable grade-school daughter, whose presences grace the film with warmth, soulfulness, and much-needed comedy. It's a hard world for unduly entitled Americans. Would that they all had empathetic French counterparts to help lighten the load.