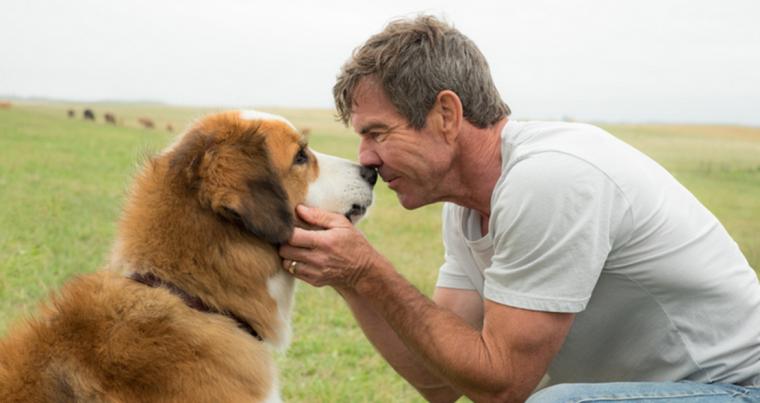 With apologies to my parents’ house cat Sam, who I’m crazy about, I’ve always been more of a dog person, and was totally anticipating a good cry at A Dog’s Purpose even in light of that notorious, upsetting footage of a German shepherd seemingly forced into a scary-looking aquatic stunt. Yet while its trailer never failed to slay me, I actually watched director Lasse Hallström’s family weepie completely dry-eyed, given how tough it is to get misty when your primary emotions are confusion, irritation, and offense.

Regarding the confusion, I direct you to the plot, which finds the adorable puppy Bailey (voiced by Josh Gad) selflessly devoted to his first owner Ethan Montgomery before death and reincarnation lead the canine to another owner, and then another, and then another. If you’re someone who has enjoyed a cathartic bawl at Old Yeller or Where the Red Fern Grows or Marley & Me, A Dog’s Purpose would seem right up your alley. But those movies at least made sense, and even granting Hallström’s latest its narrating-pup premise, this one doesn’t. Why does Bailey recognize human sadness, but not human anger? Why does he have telepathic understanding of his owners’ thoughts, but not those of other animals, including other dogs? Why, when the retriever Bailey is reincarnated as that female German shepherd, does he still speak in the voice of Josh Gad?

The senselessness of the script – one that took all of five screenwriters, including the novel’s original author W. Bruce Cameron, to concoct – extends to its strangely, off-puttingly make-believe world. After Bailey, now in Corgi form, finds himself the pet of lonely college student Maya (Kirby Howell-Baptiste), he’s evidently allowed to sit next to his owner in class, which, you know, wouldn’t happen unless he was a seeing-eye dog. Later, he’s seen at Maya’s feet in an upscale restaurant. By the time the pup was being prominently showcased in Maya’s wedding photos, and making a comedic mess of the proceedings, I was muttering, “Put that bleeping dog in the house!” through gritted teeth, only I didn’t use the word “bleeping.” It’s one thing for Bailey and the post-Baileys to be insatiably beholden to their owners. It’s quite another for the owners to be so ridiculously beholden in return, with Bailey’s favorite human Ethan (played in teen form by K.J. Apa) literally unable to go anywhere – even to a front-seat make-out session – without his trusty pooch in tow. 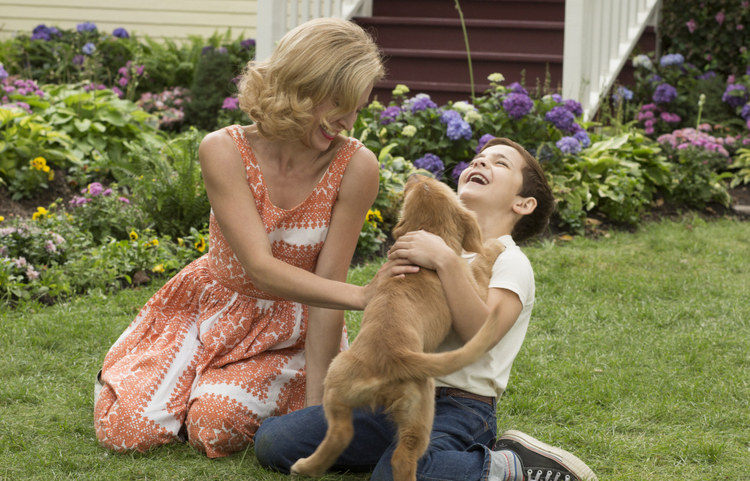 But even though most of A Dog’s Purpose frustrated and annoyed me, I didn’t outright hate the film until it starting proving grossly ignorant about how much shamelessness is way, way too much. Eager as I am to spoil the moment, I won’t reveal the climax of the staggeringly inept kidnapping subplot – a confluence of ridiculous plotting and über-maudlin writing, scoring, and voice-over acting that elicited, in me, inappropriately (albeit deservedly) derisive giggles. In its insulting anthropomorhizing of Bailey, however, the film sinks to new lows in oppressive manipulation.

Apparently, it wasn’t enough for our canine protagonist to perform super-heroics such as saving a girl from drowning and helping a family escape a burning house. (That on-set video not only makes the girl’s rescue hard to watch, but also the scenes of Bailey surrounded by flames and slowly dehydrating in a locked car. You wind up wondering just how much canine “acting” is actually going on here.) Near the end, the dog also has to communicate with owner Dennis Quaid with such innately human motivation and capability that it wouldn’t have been a shock to see the animal literally speaking in the voice of Josh Gad; Hallström’s movie is like Heaven Can Wait with Lassie cast in the Warren Beatty role. There are a few strong portrayals, particularly by Luke Kirby as an alcoholic dad and John Ortiz as a grieving cop, and some warm images courtesy of cinematographer Terry Stacey. But A Dog’s Purpose should still be buried in someone’s backyard. 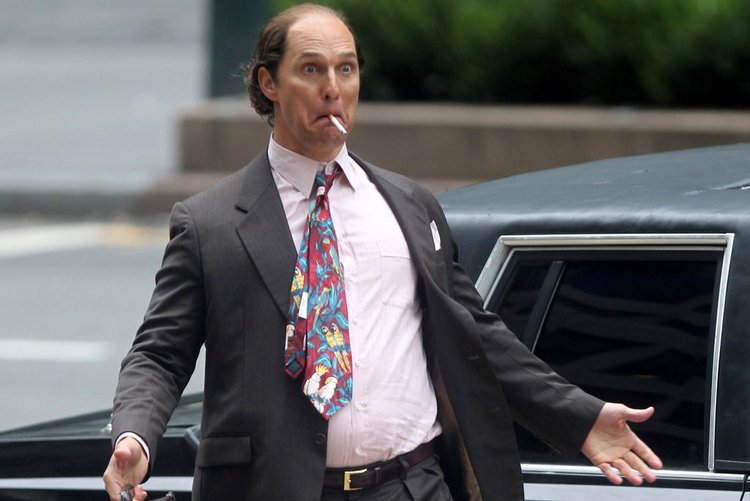 Your enjoyment of director Stephen Gaghan’s Gold will likely depend on how much you can still stand Matthew McConaughey, and I’m afraid that – for the time being, at least – my patience may have reached its end. I should probably specify that I don’t mean McConuaghey in general; he delivered a fine, focused portrayal in Free State of Jones just last summer and contributed some amusing vocal work to the animated Kubo & the Two Strings and Sing. I’m talking about the actor in full “Look at me, Ma!!!” performance mode, the way he frequently was in Dallas Buyers Club and The Wolf of Wall Street and Interstellar and those Lincoln car commercials, where he fills the screen with so much McConaughey-ness that his presence feels almost suffocating. Here, I was frankly amazed that any of his co-stars found air enough to breathe.

With its tale of a gold-mining alcoholic huckster (McConaughey’s Kenny Wells) whose phenomenal discovery in Indonesia results in massive stock-market success before – surprise! – being undone by corporate greed and chicanery, Gold isn’t devoid of interest, even if its basic “We’re gonna get so rich!” narrative is familiar from entertainments as iconic as Wolf of Wall Street and as recent as last week’s The Founder. And if you can ignore Bryce Dallas Howard, who certainly tries hard in her stock role as fretful arm candy, the supporting cast is superb, with Edgar Ramírez soulful yet cagey as Wells’ partner, plus minor figures given major heft via the skills of Corey Stoll, Bill Camp, Joshua Harto, Bruce Greenwood, and Craig T. Nelson. You have to be diligent to appreciate them, though, because McConaughey clearly doesn’t want you watching anyone but him. The externals of Wells are distracting enough, given McConuaghey’s physical transformation through his balding pate, protruding gut, constantly sweaty face, and snaggle-toothed incisor that the actor’s clearly practiced lip curl incessantly showcases. (Wells also wears loud, ugly ties and a pinky ring, and spends so many scenes in tighty-whiteys that I may now have seen Matthew McConuaghey in his underwear more than I’ve seen myself in my underwear.) But when you add his popping, religious-zealot eyes and loopy readings that seem forever accompanied by jazz hands, McConaughey doesn’t act up a storm so much as a hurricane in Gold, and his exhausting efforts eventually overpower everything from the lush greens of cinematographer Robert Elswit’s photography to the unparalleled dryness of Stacy Keach. The only time I truly admired the star here was when, in screenwriters’ Patrick Massett’s and John Zinman’s finest piece of writing, Wells gave a long, rambling, desperately egocentric speech while picking up a shiny trophy. It was an unexpectedly cutting parody of McConaughey’s famed and much-maligned Oscar speech, but I’m not convinced that the actor was in on the joke. 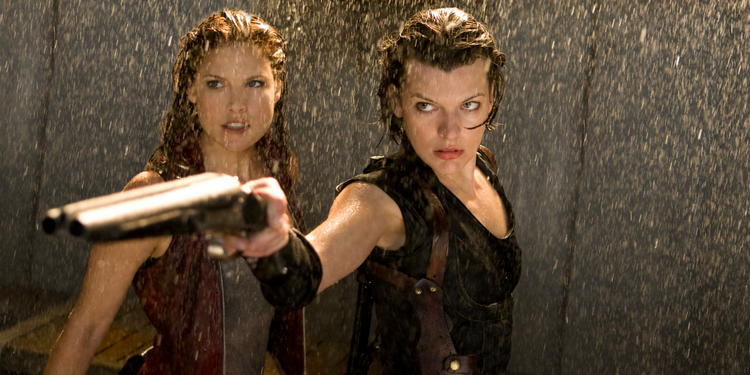 “Sometimes I feel like this has been my whole life,” says Milla Jovovich’s post-apocalyptic Alice in Resident Evil: The Final Chapter, and whenever a new installment in this 15-year franchise is released, I sometimes feel like it’s been my whole life, too. Happily, though, the zombie tedium is kept to a minimum in director Paul W.S. Anderson’s concluding saga, and while I can safely say that I won’t miss the series, there were just enough images and hyper-edited thrills here to keep me diverted. While Alice and her latest rogue’s gallery of support hunt for an undead-annihilating anti-virus, Anderson pulls off queasy shock effects with flesh-eating pond dwellers, mutated junkyard dogs, and a really powerful turbine, and his scenes involving hundreds of zombified hordes are powerful enough to suggest Peter Jackson’s more epic battles, or at least the ambulatory wall of corpses in World War Z. As for Jovovich, her talents will never give Meryl Streep a sleepless night, but she’s become a lithe, commanding action-flick lead with significant gravitas and an effective thousand-yard stare; it feels like the mistake of a lifetime that this series never found a way to incorporate Sigourney Weaver as Alice’s mother. Toward RE:TFC’s end, Iain Glen’s Dr. Isaacs, the eternal thorn in Alice’s side, tells his adversary, “We’ve played a long game, you and I.” They sure have. But it hasn’t been without its ass-kicking charms.