Puzzles: “Jigsaw,” “Thank You for Your Service,” and “Suburbicon” 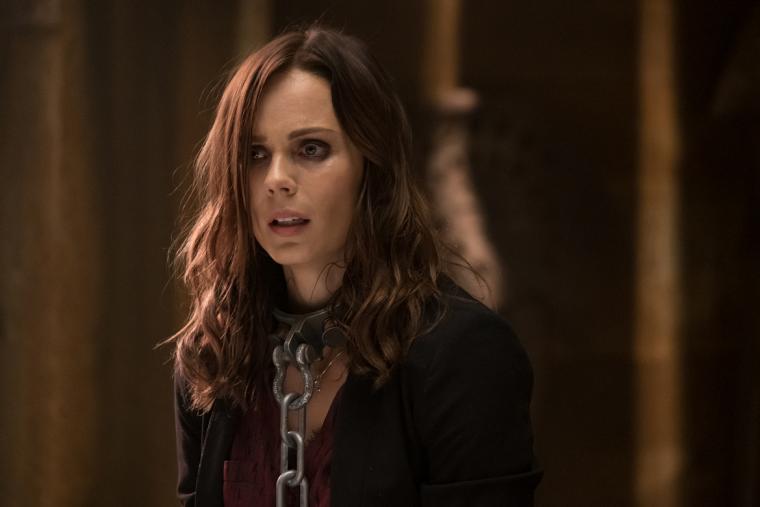 “He came back from the dead?!”

“It wouldn't be the first time.”

In two lines of dialogue, that might be all you need to know about Jigsaw, the eighth – and quite possibly least-offensive – entry in the Saw franchise, and the first since 2010's now laughably titled Saw 3D: The Final Chapter.

If, for some reason, you do need more, that opening query's “he” is John Kramer, a.k.a. Jigsaw, whose cancer diagnosis inspired him to become the world's most snidely moralistic serial killer. That Kramer (portrayed by the gaunt, mellifluously voiced Tobin Bell) died way back in Saw III never impeded the annual erection of insanely convoluted torture chambers that led to the deaths of the criminally negligent, ethically bankrupt, and just-plain-douchey. His death never impeded Bell's participation, either, as every subsequent Saw film has guaranteed appearances by both Jigsaw and his porcelain doppelgänger: a white-faced doll with cheekbone implants and Gene Simmons hair that routinely tricycles its way into view. (Nothing in these movies makes me giggle harder than the actors' panicked expressions upon the squeaky-wheeled arrivals of this mosh-pit Chucky.)

Well, Jigsaw is officially back, and Bell is back, and that string-less marionette on a trike is back – and blessedly, for my tastes, this splatter flick by directing brothers Michael and Peter Spierig is a mild improvement over its seven predecessors, even if that's hardly a compliment. 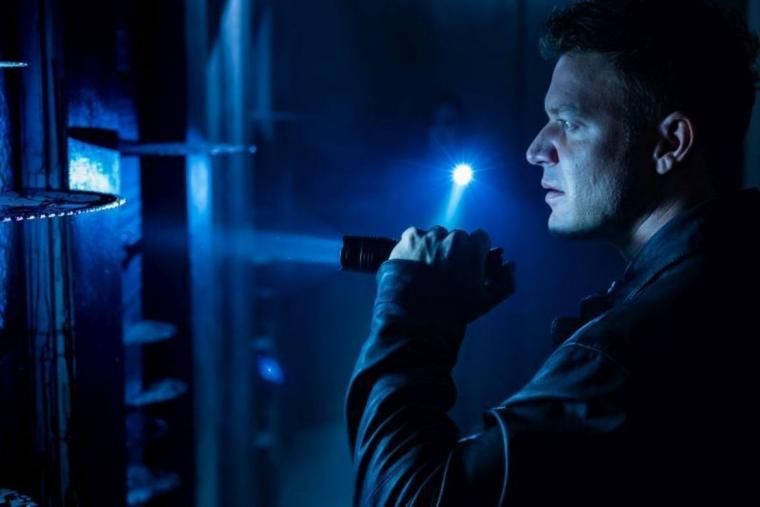 It's difficult to tell, for instance, if this series installment went out of its way to find the least appealing and charismatic actors available or if it's merely accidental. But with the exception of the subtly sinister Bell, just about everyone on-screen is either a profane, shrieking dullard or a profane, sardonic investigator, and while plenty of corpses stack up, it's still not as many as the underwhelming cast had me hoping for. (Callum Keith Rennie plays a chain-smoking, gum-chomping detective with a bad attitude, and after five excruciating minutes in his company, I was ready to do him in myself.)

And even though Jigsaw exudes a professional sheen that largely eluded its forebears (it's the first one that doesn't look like it was shot in someone's basement over a long weekend), far too much is annoyingly familiar. There are the standard Rube Goldberg traps that require Jigsaw knowing precisely how victims are going to behave at every second, and the standard impossibilities regarding the space-time continuum. There's a plot-dependent torture chamber – here it's a barn – that's miraculously hidden from humanity yet roughly the size of a metropolitan airport. There's a ticking red clock. (In the first five minutes!) And there's the climax in which, as usual, everything we witnessed is re-explained through a barrage of exposition, flashbacks, and alternate perspectives that lands with skull-numbing force. By this point in the series, Jigsaw could simply use his movies' bludgeoning finales as his weapons of choice.

Still, I didn't hate Jigsaw, and at times – gulp! – I even came dangerously close to having fun. This was partly because the Spierig brothers' outing is surprisingly easy to watch. While the mutilations and executions are grisly, their presentation, and the characters' suffering, aren't nearly as pornographically protracted as they've been in the past; you aren't left with the discomfiting sense of directors wanting to shove our faces in the cruelty. (When the Spierigs and screenwriters Pete Goldfinger and Josh Stolberg deliver their most outré death – one involving lasers to the head – the results are as funny as they are revolting.) And although the contrivances are typically piled on, I'd readily admit that the heavy-handed wrap-up actually worked for me. Not only did the logic mostly hold together, but the resolution immediately quashed a half-dozen serious complaints I previously had with the film, and answered at least as many burning questions, among them “How do the dead bodies get from the barn to the city so fast?”, and “Why hasn't the tape-recorder-happy killer upgraded to digital?” Jigsaw, and Jigsaw, will no doubt be back. For the first time since the series' 2004 debut, I'm not altogether dreading that. 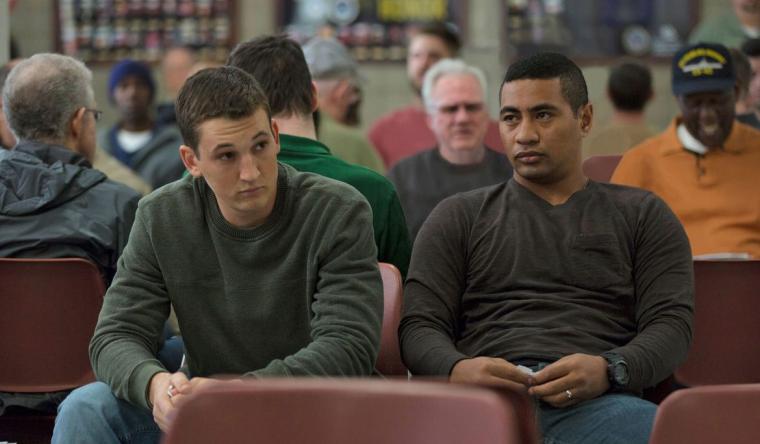 THANK YOU FOR YOUR SERVICE

Writer/director Jason Hall's Thank You for Your Service focuses on Iraq War veterans coping with PTSD, opening and closing on scenes of military combat, and its most devastating moment is still a quiet one in the hallway of a Kansas administrative building. Staff Sergeant Adam Schumann (Miles Teller) and Army Specialist Tausolo Aieti (Beulah Koale) have recently returned from their latest tour, and following the wholly unanticipated suicide of a friend and fellow solider, the men have agreed to seek medical assistance. (Schumann masks his severe depression behind a façade of cheerful amiability; Aieti suffers from hallucinations and significant memory loss.) But while waiting in line at their local veterans-affairs office for health benefits and psychologist appointments – which we learn may take six to nine months to secure – one of their former commanding officers greets the men and exchanges pleasantries before whispering a quick word of advice to Schumann: “Don't let these younger guys see you fold like this.” The officer walks away, yet that horrible word lingers – “fold,” as though seeking assistance of any kind were some sort of humiliating failure of character. Schumann continues to stand in line, but his eyes make it clear that the word, to say nothing of his commander's casual delivery of it, has struck him like a bullet.

At its best, which is often, this insightful and moving drama hits you the same way – not with explosive blasts, but with piercing conversations and non-verbal communication no less aching for being muted. Hall, who also wrote the screenplay for American Sniper, has a far more expansive war-at-home palette to work with here than he did in Clint Eastwood's film. (His script is based on David Finkel's 2013 nonfiction.) And as we watch the soldiers attempt to heal following particularly haunting 2007 experiences, there are subtly wrenching sequences galore: Schumann and Aieti, sporting night-vision goggles, repressing/satisfying their urges; Schumann brushing his teeth with frighteningly violent aggression; Aieti, looking miserable in a food court, letting his pregnant wife talk him through a health-benefit questionnaire. (The radiantly present Keisha Castle-Hughes plays Aieti's wife, and Hall demonstrates equally ample regard for the damaged spouses beautifully played by Haley Bennett and, quite unexpectedly, Amy Schumer.) Hall clearly knows his subject – as much as anything else, it's a movie about the paralyzing, maddening, seemingly endless bureaucracy that veterans must endure – and knows where to find pressure points that other writer/directors could easily miss.

Most heartening of all, though, is Hall's extraordinary empathy, which is evident in everything from the pained, textured performances of Teller and Koale (delivering a true star-is-born turn) to the way his camera briefly lingers, without comment, on those who've returned from combat with missing limbs and are comporting themselves with staggering dignity. (I might forever remember the sight of a legless veteran attempting, with supreme patience, to tie his shoes using the hooks he now has for hands.) The film has flaws, and not all of them are minor ones. Its final third is overwritten and uncharacteristically melodramatic – as is the Sophie's Choice-esque delay in Hall's handling of the ultimate reveal – and while most of the dialogue boasts a scrappy naturalism, Teller narrating the opening in voice-over is a misguided choice, leading us to expect an easy sentimentality the movie almost completely eschews. Yet Thank You for Your Service remains a brutally, sometimes bitterly honest and affecting homecoming tale, and by its end, I wanted to sincerely thank Jason Hall for his service, too – at least to the art of filmmaking.

Did you know that racists suck? And adulterous murderers suck? And the white-bread suburbs of the 1950s weren't necessarily the safe, welcoming environments they were cracked up to be? If you didn't, thank God for George Clooney, because in his latest directorial offering Suburbicon, those facts will be pounded into your consciousness so thoroughly that there's no chance you'll ever forget them. Working with his frequent collaborator Grant Heslov, the co-screenwriters have fashioned a tale of home intrusion, insurance fraud, hateful bigotry, and more from an original script by Joel and Ethan Coen that was reportedly written more than 30 years ago. If only that script had been stashed in the locked drawer of some desk. And the key got misplaced. And the desk had been lost in a fire.

Tonally incoherent from one scene to the next, and with Alexandre Desplat contributing a similarly schizophrenic score, the experience of Suburbicon is damned near agonizing, which was probably inevitable considering the film can't decide if it's a wicked satire, a mournful lament, or some unholy blend of both. Less expected is that Matt Damon would give, simultaneously, his all-time emptiest and least agreeable film performance, that Julianne Moore would ever look this at-sea on-screen, and that Clooney would so blatantly steal iconic imagery from the Coens' Fargo and Burn After Reading. (This isn't homage so much as grand larceny, although nothing about Clooney's work here is grand.) Oscar Isaac, as he generally does, appears to be having a good time, and our young lead Noah Jupe has a touching presence and excellent look, resembling a traumatized, pre-teen Eric Bana. But there isn't one solid laugh, genuine shudder, or even borderline-interesting idea in the whole of Suburbicon's 100 inert minutes. There is, however, a “con” in the title. It's being played on us.