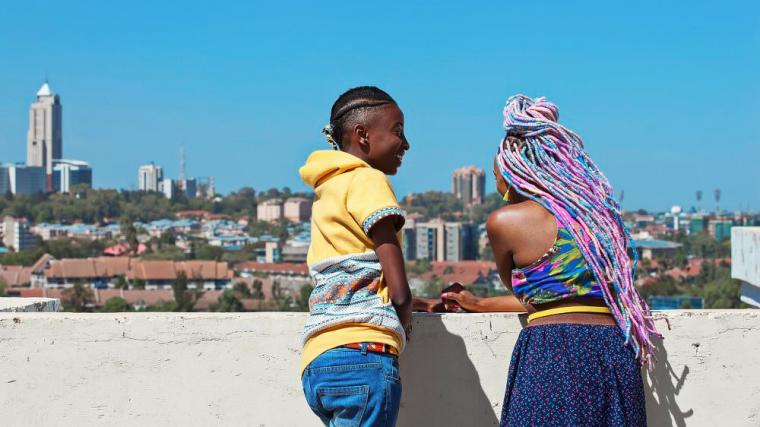 Lauded by the Los Angeles Times for "its transporting sense of place, its striking visual pleasures and its credible and moving performances," the 2018 drama Rafiki enjoys a June 12 Figge Art Museum Screening as part of the Davenport venue's celebration of Gay Pride Month, this acclaimed romance noted for being the first Kenyan film to ever be screened at the Cannes Film Festival.

In writer/director Wanuri Kahiu's Rafiki, a young woman named Kena helps her father John Mwaura run a small convenience store in Nairobi as he campaigns for a local election. Kena lives with her mother, who isn't on speaking terms with John, and before long, she starts flirting with Ziki – a neighborhood girl with colorful hair who also happens to be the daughter of Peter Okemi, John's political rival. Kena and Ziki have a number of romantic dates, and quickly become very close. But because homosexuality is illegal in Kenya, there are tensions about displaying their affection in public, and matters for the young women are made worse when Ziki's mom catches them kissing. They run away together but are found by the town gossip, who brings an angry mob to attack the two girls, and what results in Rafiki is a moving testament to the power of love that inspired RogerEbert.com's Odie Henderson to declare the film "a lyrical ode to finding a kindred spirit amidst an uncaring majority."

Kahiu's movie was banned by the Kenya Film Classification Board "due to its homosexual theme and clear intent to promote lesbianism in Kenya contrary to the law." The Board asked Kahiu to change the ending, as it was too hopeful and positive, but the writer/director refused, which led to the ban of the film. The KFCB warned that anyone found in possession of the work would be in breach of the law in Kenya, where gay sex is punishable by 14 years in jail. This ban consequently raised international outrage by the supporters of LGBTQ rights, and Kahiu sued Kenya's government to allow the film to be screened and become eligible to be submitted as Kenya's entry for Best Foreign Language Film at the 91st Academy Awards. In September of 2018, the Kenyan High Court did finally lift the ban on Rafiki, allowing it to be screened in the country for seven days, therefore meeting the eligibility requirements. After the ban was lifted – even though the movie failed to be selected as Kenya's Foreign Language Film submission – Kahiu's achievement was shown to a sold-out crowd at a cinema in Nairobi.

Rafiki will be screened in the John Deere Auditorium on June 12, admission to the 4 p.m. Film at the Figge event is free, and more information is available by calling (563)326-7804 and visiting FiggeArtMuseum.org.