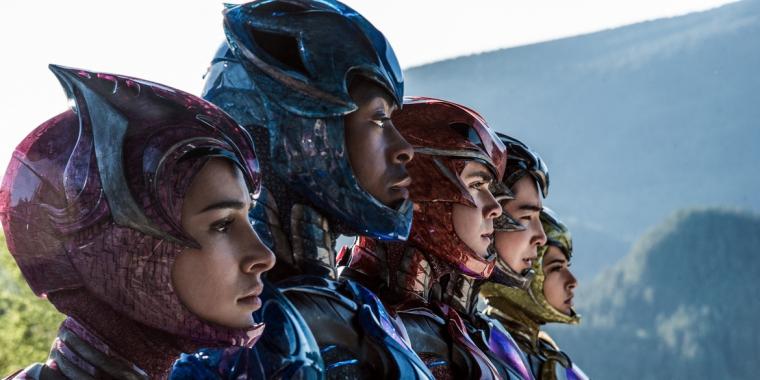 There’s an Emilio Estevez in Dacre Montgomery’s sullen jock, a Molly Ringwald in Naomi Scott’s fallen princess, an Ally Sheedy in Becky G.’s loner misfit, a Judd Nelson in Ludi Lin’s secretly sensitive tough, and an Anthony Michael Hall in R.J. Cyler’s “on the spectrum” brainiac. And before they respectively morph into costumed crime-fighters Red, Pink, Yellow, Black, and Blue – which takes a surprisingly, blessedly long time – these youths prove to be unexpectedly winning company, tossing off screenwriter John Gatin’s friendly jokes with aplomb and selling their teen traumas with impressive sincerity. Once they started battling ambulatory rock piles and a skyscraper-sized gold demon out of Gods of Egypt, I no longer cared about the kids or their movie, and kind of wanted to punch elements that MMPR fans might dig the most, including Bill Hader’s wisecracking robot Alpha 5 and Bryan Cranston’s inter-dimensional, dully grim Zordon. (I did, however, get a giggle from the sight of Bryan Cranston arguing with Cyler’s character Billy Cranston.) Yet for all of its silliness and noisiness, Power Rangers turns out to be better than expected, and I haven’t even mentioned the delirious, hilarious, legitimately scary Elizabeth Banks, who’s so smashingly fun as villainous Rita Repulsa that you practically root for her to vanquish our heroes. Though I would’ve preferred Repulsa turning her malicious attentions on whoever gave her that stupid name. 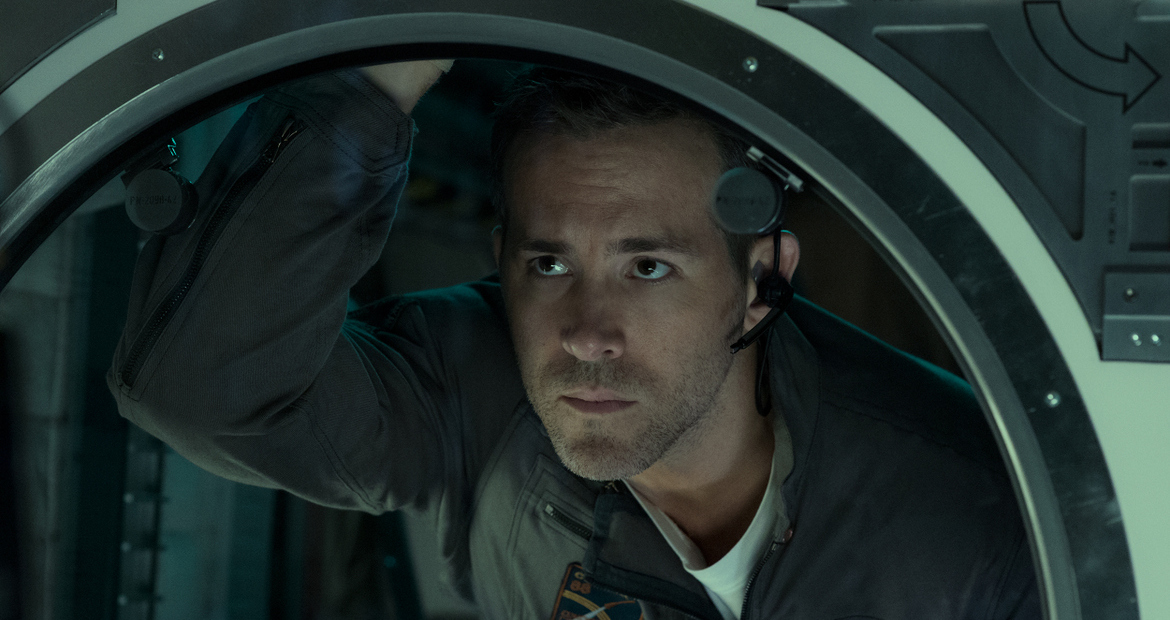 12:10 p.m.-ish: It has the most generic, not-at-all-helpful title of the day’s releases, but I wind up having a great time at Life, which concerns a group of space travelers who attempt to destroy a murderous, shape-shifting creature while it picks them off one by one. Yes, if you’ve seen Alien, you’ve pretty much seen this, and seen it done better. Director Daniel Espinosa’s sci-fi freak-out, though, is still chock-full of tension and surprises, from the sight of an astronaut literally drowning in a spacesuit to the copious blood that, in the film’s zero-gravity setting, doesn’t spill so much as coagulate and float. (Kudos to those responsible for the trailers, which, in a wonderful break from the norm, give away almost none of Life’s shocks or narrative twists.) There’s not much to the movie, and it’s almost distractingly expensive-looking considering it’s just an enjoyably vicious B picture with a nasty bait-and-switch kicker. Yet it’s strong and scary and well-performed by Rebecca Ferguson, Ariyon Bakare, Hiroyuki Sanada, Olga Dihovichnaya, and a very charming Ryan Reynolds. It’s also, for muscial-theatre fans, about as close to a serious-minded Little Shop of Horrors as you could imagine, with the baby alien looking just like little Audrey II, and the grown version a truly mean green mother from outer space. It even has a Seymour, as star Jake Gyllenhaal played that adorable nebbish in a 2015 Little Shop on Broadway! Whatever it offers you, Jake, don’t feed the plant! 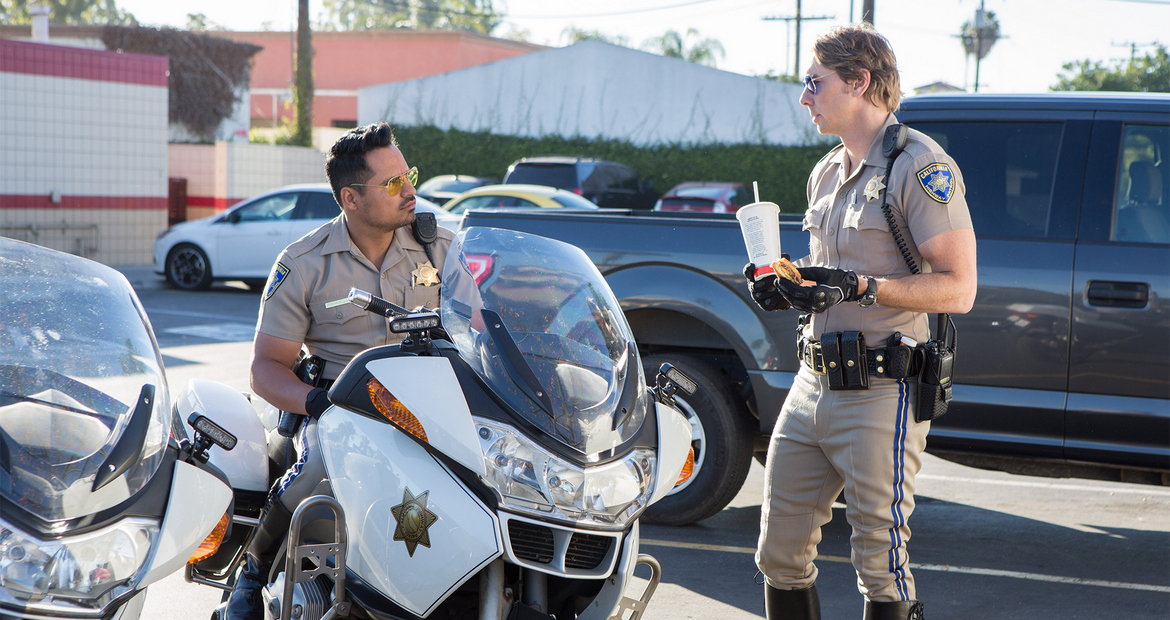 2:35-ish: Speaking of plants, at one point in the action comedy CHIPS, Michael Peña face-plants into the crotch of a naked Dax Shepard, and my fellow audience members, all six of them, appeared to find that pretty amusing. The rest of the time – the interminable 100 minutes of writer/director Shepard’s TV reboot – this noxious buddy flick was the long-sought-for answer to the philosophical riddle “What is the sound of no voices laughing?” I have neither the energy nor the desire to get into the crap-tastrophe of this appalling, incoherent, misogynist, homophobic, devastatingly unfunny tale of California highway patrolmen, to say nothing of the maddening waste of Peña’s talent and inherent likability. But seriously: Screw you, Shepard, for your insulting treatment of Maya Rudolph, Jane Kaczmarek, and Kristen Bell (she’s your wife, for Pete’s sake!); for the Sandler-level odiousness if the built-in Arby’s commercial; and for scoring one of the worst fight scenes in living memory to Aretha Franklin’s “R-E-S-P-E-C-T,” which is clearly a concept that’s utterly foreign to you. The movie is CHIPS; those of us who paid to see it were CHUMPS. 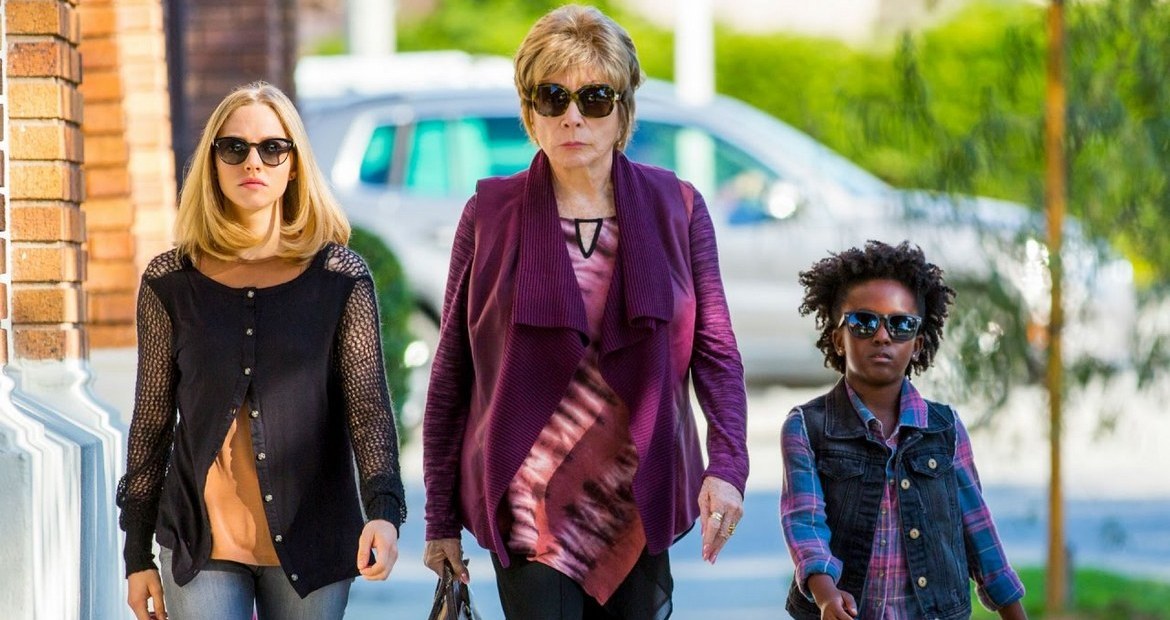 4:40-ish: Director Mark Pellington’s The Last Word, in outline, sounded almost unbearably precious, with Shirley MacLaine’s cantankerous 81-year-old recruiting Amanda Seyfried’s journalist to write her obituary while she’s still alive, and realizing that to get a decent article, she’s gonna need to be a decent person. Cue the familial reconciliations, new embrace of life, spunky at-risk youth for the crone to mentor – and, I presumed, me throwing up in my mouth on a regular basis. Leave it to MacLaine, though, to turn this treacle into something genuinely touching and frequently endearing, which she does, paradoxically, by steadfastly refusing to be lovable. Seyfried, Thomas Sadoski, Philip Baker Hall, and Anne Heche contribute some lovely work. Yet MacLaine, with her wicked wit and blazing directness, so fully scrapes the saccharin off the cliches and predictability that this sitcom art film transforms into something much tougher-minded than screenwriter Stuart Ross Fink’s blueprint. The Last Word is an okay movie with a thunderously fine lead, and worth it just to hear MacLaine’s peerless, gravelly disdain when bemoaning “sarcasm – the wit of the witless.”

6:40-ish: I was gonna make a sarcastic comment here. Shirley’s scared me out of it.