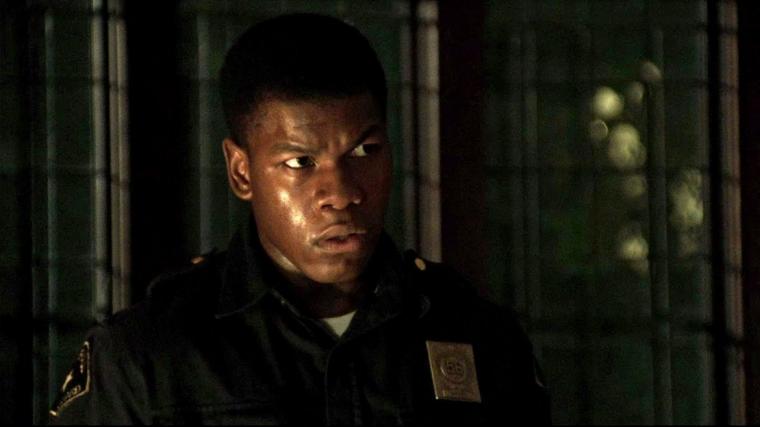 While I’m generally averse to movies whose only apparent goal is to make audiences feel like crap, I’d almost make an exception for Kathryn Bigelow’s Detroit, a relentless bummer so well-executed that I found myself riveted even when I was aching to flee. Arriving almost exactly 50 years after the true-life event it depicts – the notorious Algiers Motel Incident that resulted in the murders of three young black men – this exploration of Civil Rights-era police brutality is both sobering and sickening, with roughly an hour of its 140-minute running length barely distinguishable from racist torture porn. Bigelow, however, is such a wizardly orchestrator of screen violence and chaos, and such a precise technician, that her latest is never less than gripping. Whether you’re on-board with the how and why of the director’s grip will likely be other matters entirely.

Although this eventually proves unfortunate, Detroit is never better than during its opening 20 minutes – a lucid, horrifying retelling of how the July 23, 1967, raid of a Motor City nightclub culminated in a full-scale, days-long riot that eventually claimed more than two-dozen lives, with more than 700 civilians and responders wounded. We may not understand precisely why that particular raid led so directly to street riots, which led to looting, which led to Molotov cocktails, which led to cars and buildings ablaze, which led to the arrival of the National Guard. It’s not clear that Bigelow understands, either. But the cause-and-effect, as evinced here, is never in doubt. Through succinct, elegant brushstrokes provided by the compositions, cinematographer Barry Ackroyd’s quasi-doc imagery, and snippets of pungent dialogue courtesy of Mark Boal (Bigelow’s collaborator on The Hurt Locker and Zero Dark Thirty), we instantly sense the mutual loathing between Detroit’s largely white police officers and its black residents. We also sense just how long these resentments have been festering in what was then America’s fifth-largest city, and when the uprising begins Bigelow creates an end-of-days scenario as inevitable as it is scary through her masterful gifts for action choreography and geographic clarity. As in The Hurt Locker, we’re frequently thrown off-balance, yet somehow always know where we are, why it matters, and just how we got from one set of terrifying circumstances to the next.

It’s a tremendous prologue, and would’ve had even greater resonance if the rest of Bigelow’s film didn’t keep trying to push it out of your brain. Following the climax of that extended opening section, we’re gradually introduced to the figures whose fates will intertwine at the Algiers: the stoic security guard Melvin (John Boyega); the Motown singer Larry (Algee Smith) and his loyal handler Fred (Jacob Latimore); the Vietnam vet Greene (Anthony Mackie); a trio of racist cops (Will Poulter, Ben O’Toole, and Jack Reynor); a pair of sweetly trampy visitors from Ohio (Kaitlyn Dever and Hannah Murray); and a few jocular motel guests (among them Jason Mitchell, Nathan Davis Jr., and Peyton “Alex” Smith). And during their first scenes, Bigelow, Boal, and the performers deliver just enough specificity in terms of character, context, and personality to make you both anticipate and dread their inevitable Algiers encounter. Sadly, though, after the civilians find themselves gathered at the motel, and Melvin and the police arrive in response to a series of “harmless” starter-pistol gunshots, we aren’t given the explosion of differing temperaments all that human detail led us to expect. Instead, it’s an hour-plus of the cops – primarily Poulter’s sociopathic Krauss – threatening, battering, and, in some cases, murdering the rest, and the black and female victims of their brutality having no choice but to endure it. 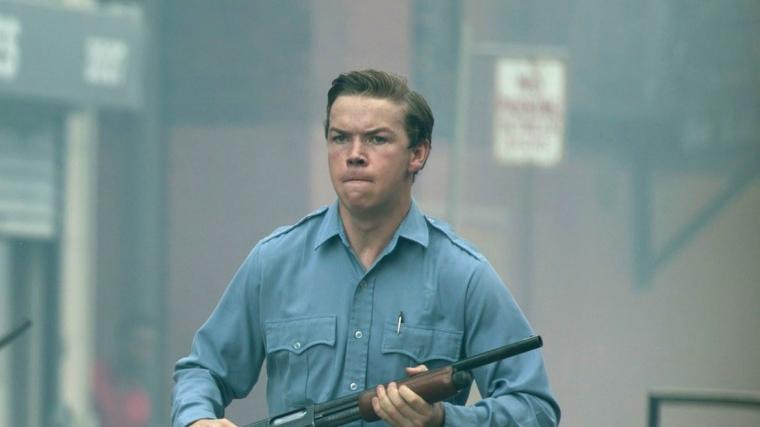 Bigelow and her team aren’t pornographers; they’re not showcasing all this hatefulness and suffering for any kind of turn-on. Yet beyond generating anger and disgust in viewers, it’s difficult to determine exactly what their endgame is with Detroit. God knows that Bigelow can create cinematic tension and anxiety, and historically speaking the story behind the Algiers Motel Incident needed to be told – and maybe, despite her being white, it even needed to be told by Bigelow, as few directors of action films bring such humanity to their works, or such thunderous talent. But the movie’s biggest flaw is that, in tandem with the motel shakedown, everyone on-screen stops being human just when we most need them to be human.

Boyega’s seemingly sensitive Melvin becomes an utter cipher whose motivations remain murky at best. The Algiers’ frightened and confused patrons – who are basically forced to spend half the film with their faces against a wall – become interchangeable victims given nothing to do but beg, weep, shriek, and, under the threat of death, pray. (In one especially gross moment, the top half of Dever’s dress is “accidentally” ripped off, adding sexual humiliation to the litany of abuses.) And the three abhorrent cops may as well be backwoods psychos in an old Tobe Hooper horror flick; Poulter’s deeply unpleasant performance is all about his Satanic eyebrows, and O’Toole and Reynor emerge solely as emotionally absent, dimwitted thugs. Adapted from true events or not (and a postscript indicates that some of the film’s action is based on conflicting testimony and consequently may be inaccurate), Detroit’s central episode is so narratively one-dimensional that I started getting angry at it, and even at those with whom I should’ve had nothing but empathy. Why, for the love of Pete, do none of the victims immediately tell the cops that Jason Mitchell’s character previously shot off that starting pistol, considering it’s clearly the “weapon” that the police are desperately searching for?

There’s more to Detroit after this segment mercifully concludes, with much of it truly great: family members’ reactions to the killing of their children; heated police interrogations; snippets from the trial that found the three cops and Boyega’s security guard standing before an all-white jury; a wrap-up involving the newly impoverished Larry. (Those scenes, with Algee Smith’s Motown croon transforming into a glorious gospel wail, feature some of the simplest, finest direction of Bigelow’s career.) And all throughout the film, you’re aware of the astounding renderings of particular sounds; I could practically feel the broken glass beneath the tires of Detroit’s roving police cruisers, and have never heard anything quite like the musical mix that found Larry’s doo-wop group at the Fox Theater rehearsing backstage while Martha & the Vandellas sang “Nowhere to Run” on-stage. Yet Detroit remained, for me, a strangely and unfortunately soulless experience – a technically adept portrait of an event, and a city, that doesn’t seem much interested in people. 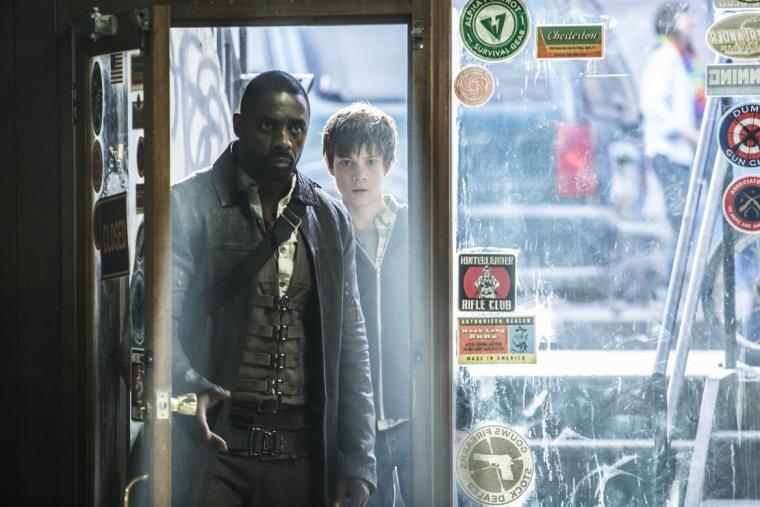 In this superhero-driven movie era, there’s something charmingly retro about the bullets that our sharpshooter hero uses to dispatch adversaries in the adventure fantasy The Dark Tower. And there’s certainly something kick-ass about the hero himself, considering that director Nikolaj Arcel’s Stephen King adaptation finds him played by the über-charismatic Idris Elba, whose Roland Deschain would likely be the new standard-bearer for cool if the movie he was in weren’t such a drag. Not having read King’s much-loved literary series about a Gunslinger, a Man in Black, and the requisite teen-King surrogate – a kid whose last name is Chambers (just like in Stand by Me!) and possesses powers of shining (just like in The Shining!) – I’m not going to join the chorus of book fans currently lamenting how much the mark has been missed. I will say, however, that Marcel’s profoundly silly, deservedly derided achievement certainly feels like an epic novel weirdly squooshed into just over 90 minutes of screen time. There are portals through time and benevolent seers and vicious demons; there are bloodless murders and fish-out-of-water jokes and extensive mythology-building; there’s Matthew McConaughey, looking like a walking ad for expensive vodka and delivering howlers such as “You have the power to resist my magics.” (With an “s.”) But none of it is terribly interesting and even less is memorable, and while the proceedings may have made more sense given another, say, three hours of filmed material, I doubt that Marcel’s apparent lack of visual invention would’ve made the experience any more enjoyable. Let’s just consider The Dark Tower a colossally missed opportunity – one of so very many in the King-adaptation oeuvre – and continue crossing fingers for It.