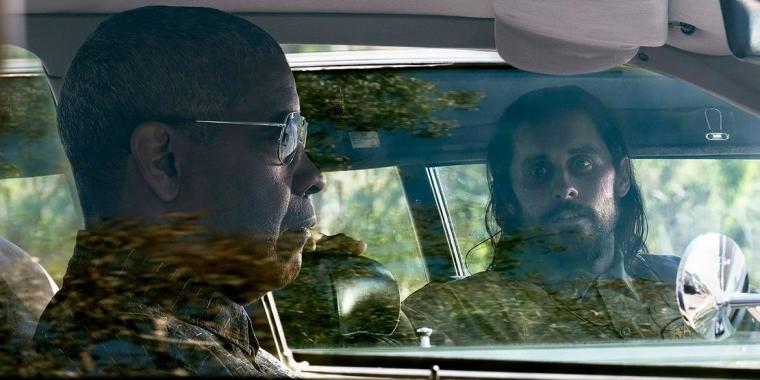 Denzel Washington and Jared Leto in The Little Things

Has late-middle-age paunch ever looked better on an actor than it does on Denzel Washington? Playing The Little Things' Joe Deacon, a former homicide detective now inching toward retirement as a sheriff's deputy, Washington enters scenes led by his gut, and I don't mean instinct. His protruding belly, unhidden in ill-fitting clothes, suggests hard-won confidence and authority, but also more than a hint of complacent resignation – the notion that Deacon quit caring about his appearance, or really much else, years ago. The man may be able to turn on the charm with a quick smile and easy laugh, but his midsection bespeaks a heaviness both literal and figurative, and Washington wears it with such effortless comfort, command, and style that writer/director John Lee Hancock's retro thriller (currently playing at the Davenport cineplex and streaming on HBO Max) is routinely given more gravitas than the film deserves – not that the lack of gravitas isn't entertaining in its own right.

If you were alive and watching movies, specifically R-rated movies, in the 1990s, the news that Washington's latest casts him as a cop on the hunt for a serial killer might inspire a few questions. Questions such as “Seriously?” and “Again?” You may not remember titles including Virtuosity, Fallen, and The Bone Collector, but you'll likely recall that it sometimes seemed as though every other month during that decade found the actor pursuing a cagey sicko in a glossy, violent Hollywood release. (Morgan Freeman took over on alternating months.) That's part of what makes Washington's presence in The Little Things so appealing, given that the film takes place in 1990, and was actually first written in 1993. Hancock's decision not to update the narrative to the present day was perhaps made out of expediency, as the addition of cell phones and GPS tracking would no doubt have resulted in a massive rewrite (and would've probably trimmed this 127-minute movie down to just over an hour). The 1990 setting, though, has its benefits, because even though Hancock's plot would be ludicrously hole-ridden under any circumstances, having it unfurl in the Los Angeles of 30 years ago allows the silliness to be sort of endearing. Web searches and DNA testing are all well and good, but in a serial-killer flick, nothing quite beats the dusting for fingerprints or a buried box of incriminating newspaper clippings.

Returning to the L.A. police station he left under whispered-about circumstances (the buzzwords include “disgrace” and “heart attack”), Washington's Deacon arrives to retrieve some evidence for a hometown crime and stays to assist his replacement – Rami Malek's detective Jim Baxter – in solving a puzzling series of homicides. Naturally, the case is uncannily similar to the one that forced Deacon's “retirement” years before, and also naturally, Deacon and Baxter immediately dislike each other. (Fear not, genre fans; as usual, that feeling won't last.) Yet along with the cops' requisite tense banter, the investigation commences, and eventually leads to the chief suspect being repair-shop employee Albert Sparma. You'll know he's a weirdo because he's played by Jared Leto. You'll know he's a potentially murderous weirdo because, for the role, Leto appears to have surgically removed his eyelids. 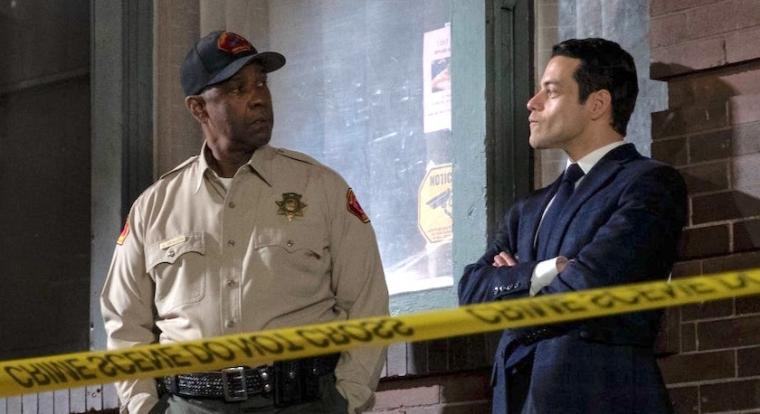 He didn't, of course. That's just Leto's go-to lunatic expression. And The Little Things, as a whole, is go-to like nobody's business. You'll only have needed to see a couple previous cat-and-mouse thrillers of this ilk to immediately recognize the character types: the sardonic coroner (an excellent Michael Hyatt) warily willing to bend the rules; the grumpy police captain (an underused Terry Kinney) fed up with his cops going rogue; the fretful Baxter spouse (Isabel Arraiza) worried that her husband is getting In Too Deep. The narrative fillips, too, are more than familiar: the interrogation that leads to the suspect's lawful but maddening release; the incessantly ringing pay phone; the late-night drive through uninhabited California terrain.

Hancock's outing, however, is still mostly a kick. With the exception of its creepy, nervy prelude that finds a young motorist terrorized by a driver who may or may not be the killer, very little of The Little Things is exciting, and even less of it is surprising. Yet it's an intentional throwback made with unexpectedly resonant professionalism and polish – the overqualified contributors of outstanding work include cinematographer John Schwartzman and composer Thomas Newman – and the film's old-fashioned-procedural nature goes down easily, like the smooth chaser to a harsh drink. Plus, there's always something arresting to look at, primarily because we nearly always get to look at the movie's above-the-title stars – occasionally, and most enjoyably, at the same time.

As Oscar-winning performers go, few are as confident as Washington, and few are as twitchy as Malek and Leto, yet their seemingly mismatched screen personae, as employed by Hancock, create a surprisingly rich blend. Every ounce of Washington appears to be in character here, and his unforced soulfulness and commitment to emotional and situational truth play exceptionally well off Malek's preening-diva act. Baxter appears to know he's outclassed by Deacon – just as Malek himself is outclassed by Washington – yet he's initially too proud, or cocksure, to reveal it. What Malek presents us with, then, is a gifted cop gradually losing touch with those gifts, and as his murder case grows more and more frustrating, Baxter's arc, and his relationship to Deacon, becomes oddly touching. (The comparison to Freeman's and Brad Pitt's partnership in Seven may be obvious, but at least it's earned.)

Leto's portrayal, meanwhile, is plain ol' nasty fun. As opposed to his excruciating Joker in Suicide Squad, Leto isn't acting all over the map this time around, and his creepiness is so controlled that the performer can let his affectless sing-song and apparently lidless eyes do the work while he glides through the movie with efficient, eerie calm; it's a showy role, but in a nice change of pace, not an overstated one. The best, most uncomfortable scene in The Little Things, mostly because it frequently puts its Oscar winners in the same frame, finds chief suspect Sparma getting perverse delight, and an accompanying erection, out of horrific Polaroids while Baxter sits across from him and Deacon stares through a two-way mirror. Deacon phones Baxter and asks, “Does he look like he's enjoying himself?” He sure does. Whenever Leto's nutjob is around, we are, too. 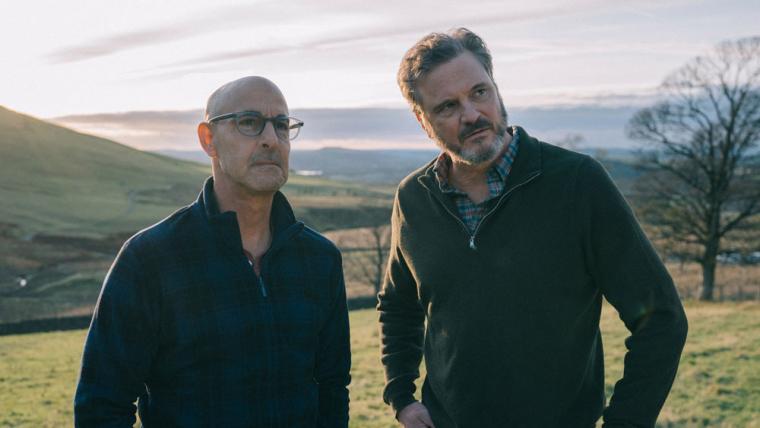 This past weekend, Davenport's cineplex debuted writer/director Harry Macqueen's Supernova, in which a middle-aged gay couple contends with one of the partners' early-onset dementia. The weekend before, we were treated to two movies about young women dying of cancer. The venue's schedule hasn't yet been updated for this upcoming weekend, but if this 2021 trend continues, I'm half-expecting the premiere of a low-key chamber musical based on Ordinary People, or maybe a harrowing adventure involving a waterfall and a boxful of kittens.

I have absolutely nothing against depressing movies. In truth, I frequently love them. But I do prefer it when “depressing” isn't the only arrow in a movie's emotional quiver, and Supernova, beautifully performed though it is, doesn't deliver much beyond its tale's inherent sadness. Macqueen's storyline, to use the term generously, finds Colin Firth's pianist Sam and Stanley Tucci's author Tusker, devoted lovers of several decades, traveling by RV across English landscapes en route to a concert engagement. They drive. They stop for groceries. They drive. They cook and eat and sleep in their makeshift home. They drive. They visit Sam's sister and assorted family members and friends. They drive. They land at an inn. They might drive once more. And through it all, the mood of Macqueen's intimate relationship drama rarely veers from wistfully resigned melancholy – there are loving yet forced conversations and meaningful silences aplenty, but there's still not much in the way of a movie. Expert talents that they are, Firth and Tucci sell everything they're asked to, and we completely believe in the couple's deep affection for one another, the playful repartee they one had and keep trying to recreate, and their loathing at the cruel trick of fate that's causing Tusker to slowly, irrevocably lose his memory. Yet despite the moving acting and those glorious, rolling green hills, Macqueen's work still feels only half-there. It's a film that, perhaps by design, comes off almost solely as a downbeat bedtime story told minutes before those involved drift off to sleep. If only that didn't include the audience. 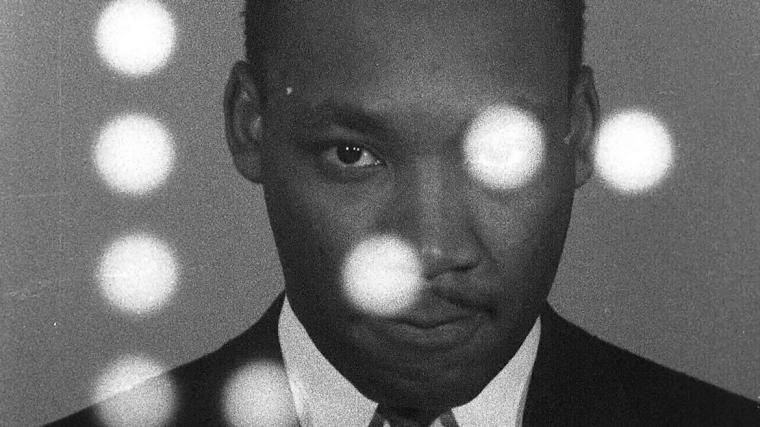 Did you know that a whopping 238 films are eligible for this year's Oscar for Best Documentary Feature? Did you know that, at present, I haven't seen 235 of them? As a onetime documentary hound (Bowling for Columbine and Murderball, respectively, topped my 10-best lists in 2002 and 2005) who has unconscionably lapsed in recent years, this fills me with no end of shame. Not quite as much, however, as the shame that should be felt during director Sam Pollard's MLK/FBI, a bold, stinging doc that explores J. Edgar Hoover's years-long surveillance of Martin Luther King Jr.

Newly available for online rental, the film employs news footage from the 1960s, old-Hollywood film clips, off-screen commentary (the speakers are only seen minutes before the end credits), and declassified documents to confront Hoover's distrust of and hatred for the civil-rights leader, as well as his bureau's attempts to delegitimize King by exposing what Hoover deemed his hypocrisy in regard to Communism and marital fidelity. A dizzying blend of reported information and learned theorizing, the movie is strong, sobering medicine – we're reminded that, as of the mid-1960s, the majority of Americans were more in line with Hoover than with King – and frequently difficult to watch and listen to. That absolutely isn't the case, however, during the many moments in which we're able to bask in King's astounding oratory, with Pollard gracing his documentary procedural with examples of the murdered reverend's peerless eloquence during televised speeches. (We even get King relaxed and funny in a talk-show appearance.) The bracing, formidable MLK/FBI is like a glass of ice-cold water thrown directly into your face. King's presence, and his words, are like the the soothing hands that arrive just in time to warm it.