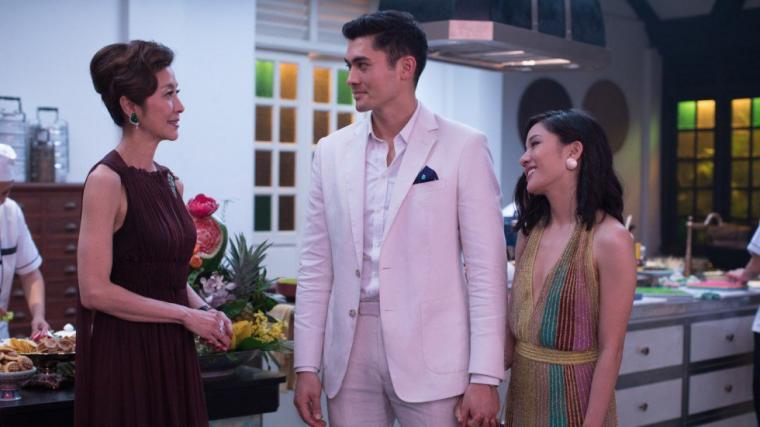 It's also, at least in movie form, unabashed rom-com fodder, which has become so rare outside the worlds of independents and streaming services that Crazy Rich Asians' formulaic premise almost feels novel. Constance Wu plays Rachel Chu, a New York University professor happily in love with middle-class businessman Nick Young (Henry Golding). Having spent the last year together, Henry asks Rachel to accompany him to Singapore to finally meet his family – principally his mother Eleanor (Michelle Yeoh) – and attend the wedding of two childhood friends. Rachel excitedly accepts the invite, but expresses surprise when, at the airport, she and Nick are immediately directed to their first-class suite complete with sleeping quarters and unlimited champagne. She's further surprised when her former college roommate Peik Lin (Awkwafina) reveals that Nick Young is the Nick Young – scion of China's wealthiest family of developers. And surprise turns to shock when the women make their way to the Young home hidden deep in the Singapore woods and discover the estate to be roughly the size of New Hampshire. Rachel, it turns out, has been dating the son of – wait for it … – Crazy Rich Asians!

As we learn, though, the film's title doesn't refer solely to Nick and his parents. Far from it. There's Nick's cousin Astrid (the splendid Gemma Chan), an impossibly glamorous, impossibly kind benefactor whose self-consciousness about her wealth causes her to hide costly purchases from husband Michael (Pierre Ping). There are the soon-to-be-wed Colin and Araminta (Chris Pang and Sonoyo Mizuno), the latter of whose bridal shower, with dozens in attendance, includes an all-expenses-paid shopping spree on a private island. There's Nick's fellow groomsman Bernard (Jimmy O. Yang), an obnoxious playboy who hosts Colin's oceanic bachelor party aboard a cargo ship. There are Peik Lin's parents (Ken Jeong and Koh Chieng Mun), whose home décor is nouveau-riche gaudiness in extremis. (Their entryway, Rachel is informed, was modeled on Donald Trump's bathroom.) And there are all manner of Young relatives and female friends of the bride whose outfits, bling, and attitudes suggest monetary comfort that Rachel and her working-class mom (Tan Kheung Hua) have never known, with the fabulously well-off women more than eager to make Rachel feel crappy about that. 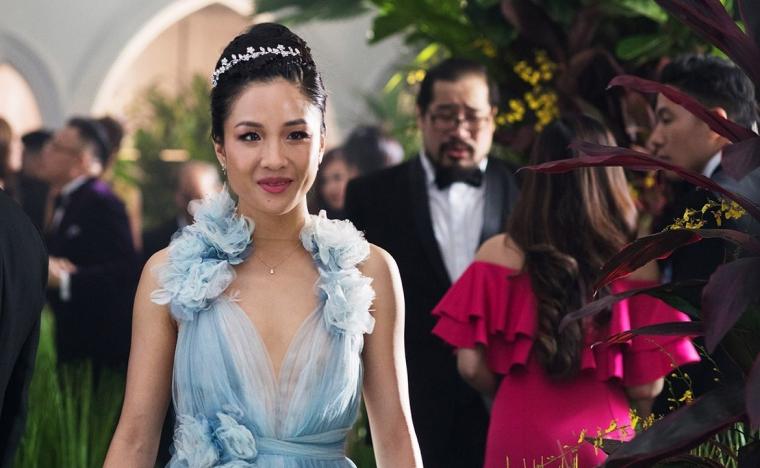 Adding Nick's old-world grandma (Lisa Lu), his gay-fashionista cousin Oliver (Nico Santos), his bitter ex-girlfriend Amanda (Jing Lusi), and the sexy stranger Charlie (Glee's Harry Shum Jr.) who shows up during the end credits, that's an awful lot of significant figures to squeeze into one 110-minute movie, and their collective presence can make Crazy Rich Asians feel somewhat bloated. That would likely be a bigger detriment than it is if bloat weren't the film's central motif. All throughout, however, we're invited to marvel at the grotesquely enticing luxury on display, and marvel we do. On more than a few occasions, especially when cinematographer Vanya Cernjul panned over the acreage of Eleanor's jungle manse, I found myself unable to stop giggling at the bold, wildly colorful extravagance on display. (Colin's and Araminta's wedding, meanwhile, is said to cost $30 million, and while witnessing the heart-stoppingly beautiful ceremony, damned if you're not convinced that every last penny is visible on-screen.) The characters' über-richness is itself comedic here, and the already empathetic Constance Wu, who stars on the sitcom Fresh Off the Boat, grows even more so when you sense how negligible Rachel feels in her unfamiliar surroundings. She's as shell-shocked by the milieu as we are.

Eleanor, as the plot demands, is ready to take advantage of Rachel's discomfort by convincing the young woman that she's not an appropriate match for her well-bred son, and the role could easily have been that of a cartoon harridan accessorized with pursed lips and withering bon mots. Yeoh, though, portrays her matriarch with such extraordinary dignity and subtle panic that she transcends stereotype, which couldn't have been easy to do in a movie so unashamedly mired in stereotype. Several cast members take their one-dimensional parts and run with them; Santos is a hoot as Rachel's sweetly sarcastic ally (eyeballing her in an eyesore of a party gown, Oliver accurately states that she looks “like a slutty Ebola virus”), while Awkafina is brashly hysterical as the token Wacky Best Friend, not stealing her scenes so much as waving a gun at them and taking them by force. Yet despite their (and others') comic skill, Chan's poignancy, and the endearing Wu, Yeoh is the only performer to suggest true interior life, along with the potential costs – emotional, generational, historical – of her son turning his back on family. Yeoh is funny when she needs to be, as she is in the sharp, satisfying prelude that effectively establishes Eleanor's power and willingness to use it. But she also lends the film legitimate real-world tension, and Crazy Rich Asians needs all the real-world anything it can get.

You'll have to jump through several hoops of contrivance to buy that Rachel could've been so blind to Henry's wealth for a full year in which, apparently, not one paparazzo ever snapped a pic of the pair dining together in mid-town Manhattan. (Lord knows the burg's Asian community, as we're shown, is well-aware of Henry's true identity.) Screenwriters Peter Chiarelli's and Adele Lim's dialogue, particularly in the film's first half, relies far too heavily on exposition delivered as inorganic sitcom banter. (“I'm so Chinese that I'm an economics professor with a lactose intolerance.”) And while Wu and Golding make a dashing couple, I never quite believed in their characters' romance, which has been designed as so blandly stable that their portrayers wind up sharing more chemistry with Awkwafina and Pang than they ever do with each other. All that being said, though, Crazy Rich Asians certainly delivers the goods in terms of visual appeal and comedy, which is great, and Asian screen representation, which is phenomenal. And I practically got my money's worth simply through the mouth-watering shots of the varied Chinese delicacies on display. In one scene, our leads and the marrieds-to-be enjoyed an outdoor lunch of steamed dumplings and seafood and beer, and I found myself distracted by a weird rumbling sound accompanying the images. It was my stomach growling. 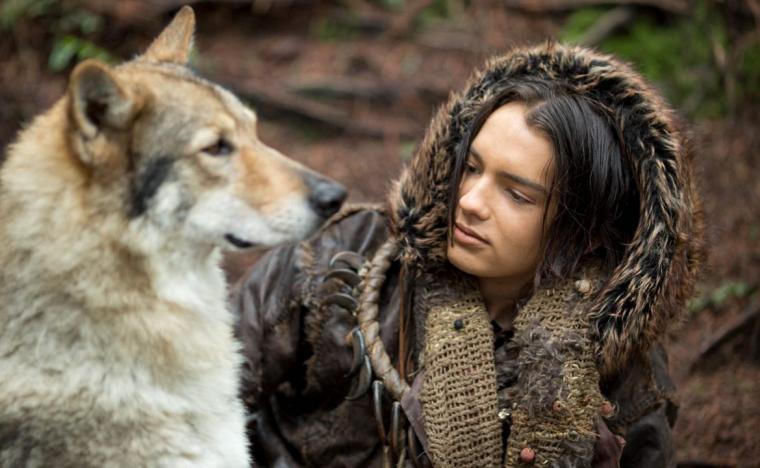 A prehistoric tale of a boy and his furry companion set in Europe some 20,000 years ago, director Albert Hughes' Alpha features loads of computer-animated animals, birds, and insects sharing the screen with an actual wolfdog that, on occasion, shares performance duties with a CGI stunt double. Almost creature for creature, the generated effects are rather obvious and unconvincing, especially when viewed against the reality of the film's majestic (Canadian) exteriors. And I'm opening with this information just to get it out of the way, because this Ice Age adventure is otherwise terrific – thrilling, moving, scary, and the finest survival drama of its type in years. It's like 2015's The Revenant without the Oscar-baiting portentousness, or 2012's The Grey if the wolves were on our side.

Separated from his gruff yet tenderhearted father (the deeply emotional Jóhannes Haukur Jóhannesson) and their tribe after a hunting expedition leaves the boy literally, and seemingly fatally, trapped between a rock and a hard place, the teenage Keda (Kodi Smit-McPhee) must navigate his way back home with an initially wary, eventually devoted wolf as his only companion. That description might make Alpha sound hopelessly mawkish, and there are certainly moments, particularly during a few of the more improbable rescues, in which Hughes too nakedly lays on the sentiment. There aren't many, though. Because beginning with Hughes' decision to have all the dialogue subtitled – with screenwriter Daniele Sebastian Wiedenhaupt inventing a prehistoric language specific to the film – the movie is far more earthbound, and tougher-minded, than its trailers and family-friendly promotional tagline (“how mankind discovered man's best friend”) indicated.

On more than one occasion, Keda remarks on how badly someone (or some animal) smells, and cinematographer Martin Gschlacht's images of hirsute hunters and bodily decay exude such mangy authenticity that you all but wince at the odors, too. Yet there's a sense of visceral tactility in everything from Keda's swollen purple foot to his emaciated face to the maggots he and his traveling companion are forced to eat, and the widescreen landscapes are as gorgeous as the ordeals are harrowing. You ache right along with the marvelously expressive Smit-McPhee, but you also share in Keda's infrequent triumphs and nearly ceaseless awe. Those unfortunate CGI critters aside, Alpha is a technical stunner and an aural wonder, and oftentimes frightening as hell, with one lightning-quick leap from the darkness producing a jump-scare that horror-flick aficionados will relish. But Hughes' outing proves just as touching as it is tension-filled, and the tenuous rapport that develops between Keda and the wolf he names Alpha is filled with grace notes that almost blindside you with their sweetness. In perhaps the most memorable example, Keda whips a stick at his unwanted “pet” in an attempt to discourage the animal from following him; the wolf consequently takes the stick in his mouth and returns it to the boy, initiating history's very first game of fetch. It's corny, yes, but also irresistible, just like the whole of Hughes' unexpectedly edgy, undeniably heartfelt achievement. 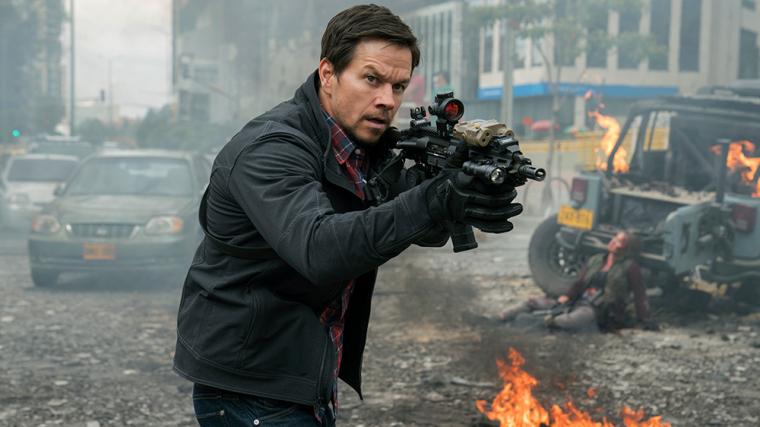 Working for the third time with director Peter Berg, Mark Wahlberg was a fraudulent, speechifying pain in the ass in 2016's Patriots Day, but was at least semi-ignorable thanks to the subtler, lived-in portrayals of the film's excellent supporting cast. In his fourth go-around with Berg, however, as the star of the action thriller Mile 22, Wahlberg is pretty much the whole show, and upon exiting this repellant exercise in paranoid lunacy, I couldn't tell if it was the movie or simply Wahlberg himself I felt more inclined to punch. Without question, I found this hyper-violent drivel about an elite CIA unit and its attempts to protect a double agent (Iko Uwais) from assassination endlessly insufferable, a beyond-tiresome assemblage of bullets, explosions, fist fights, broken glass, screeching tires, screeching characters, and Deep State conspiracy-mongering without a brain in its over-edited head. But playing the team's ruthlessly remorseless leader James Silva – a purported genius from childhood with no family or moral compass – Wahlberg is so thunderously overbearing that he eradicates whatever nominal fun might've been found in Berg's more fevered set pieces, John Malkovich's dry wit, or Uwais' considerable martial-arts skills. Nattering away at 1,000 words per minute, with the F-bomb dropped between every five, and forever fiddling with a rubber band on his wrist that I wish had found its way to his throat, Wahlberg is at his absolute snarkiest, most egomaniacal, and most unendurable in Mile 22, his loathsome creation made all the worse by the finale's promise/threat of sequels. (God please spare us from Mile 22 2.) Describing what may be wrong with the motor-mouthed Silva, one character suggests that the man is manic-depressive, while another opts for bipolar and another guesses that he's an intense narcissist. Finally, a dissenting voice is heard from: “He's just an asshole.” At least someone else said it.