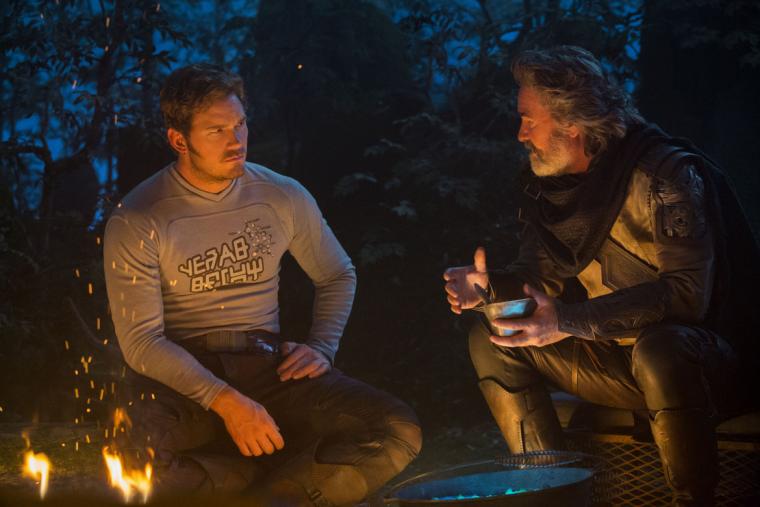 Chris Pratt and Kurt Russell in Guardians of the Galaxy Vol. 2

GUARDIANS OF THE GALAXY VOL. 2

After a brief prelude set in 1980 Missouri, Guardians of the Galaxy Vol. 2 flash-forwards 34 years, catching up with our motley crew of space travelers not long after we last saw them. This may be the film’s single most-unexpected aspect, because with the action unfurling over the course of only a few days, it’s the first time since 2011’s Captain America: Winter Soldier that a Marvel Studios movie is also a period piece. Granted, three-years-ago may not scream “period.” But in this case, it definitely is, given that writer/director James Gunn’s continuation feels so 2014 that it’s almost as if its audience has been in hyper-sleep for the past 33 months, and is awakening just in time for a new Guardians to start. I really wish I meant that as a compliment.

Fear not, fans: There are compliments to come, and Heaven knows patrons at my screening appeared to have a blast, roaring at the unchecked honesty of Dave Bautista’s Drax and chuckling at the song selections and “Aw-w-w!”-ing whenever Baby Groot’s eyes welled with tears. (All told, Vol. 2 is an awfully welling-with-tears adventure; even Bradley Cooper’s rasping Rocket sheds one.) Yet partly because of the filmmakers’ and performers’ invention, and partly because so many of us were previously unacquainted with these particular Marvel figures, the chief pleasure of 2014’s Guardians of the Galaxy was its surprise. The narrative, origin-story tenets, and adherence to Marvel formula may not have boasted much, but the film still kept you on your toes by frequently knocking the wind out of its own sails. Give or take a Deadpool, few genre blockbusters before or since have so routinely undercut their own earnestness – all those heroic closeups, noble speeches, and soaring music cues – with appreciatively snarky, moment-deflating humor. (It’s impossible to imagine similar self-parody in the current DC universe.) Guardians may have built to an inevitable end-of-days finale, but happily it also never stopped reminding us of its inherent silliness – that we weren’t meant to make that big a deal out of its easy-listening tunes and heavily armed raccoon and tri-syllabic tree. 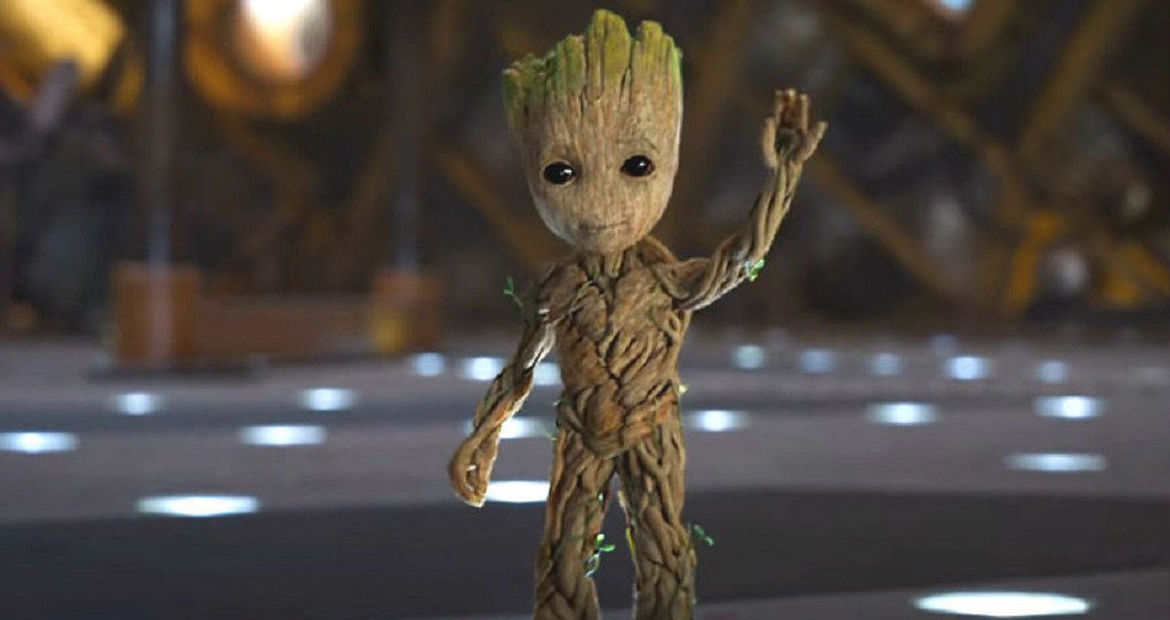 Vol. 2 has a similar insouciance, and in a couple of sequences – namely, when Baby Groot can’t understand a simple directive about what to steal, and Chris Pratt’s Peter Quinn tries in vain to locate some tape – the film hits heights of brilliantly protracted absurdity that recall The Simpsons’ Sideshow Bob forever stepping on rakes. The trouble is that we now know the formula, and know the characters, and that crucial element of surprise is gone. You could, of course, say the same of most follow-ups. But it’s important to remember that, its sci-fi and comic-book qualities aside, the Guardians series is primarily a comedic one, and gags simply don’t play as well when you can easily guess their punchlines. (After the horror of Zoolander 2, my brother challenged me to name legitimately great comedy sequels, and between us, we couldn’t even come up with five.) For the most part, Vol. 2 is pleasant enough, and as previously mentioned I was surrounded by people who found it a total kick. Yet my only laughs came from the beaming weirdness of Pom Klementieff’s empath Mantis, a new addition to the franchise, and a few bits with Baby Groot, whose introduction here finds him enacting the gopher from Caddyshack if the critter preferred ELO to Kenny Loggins. The rest of the time – even when Bautista was stealing every scene he was in – I watched Gunn’s outing with mild interest at best, waiting with decreasing interest for something truly unpredictable to happen.

I was still waiting when, after 130 minutes, the title card promising Vol. 3 hit the screen, but there were certainly occasional diversions before then. Although it’s a shame that Zoe Saldana’s Gamora is stuck in a blah subplot involving her bitter sister (Karen Gillan’s Nebula), the rest of the returning cast performs their expected sitcom shtick with a fair degree of flair, even though I really wished the terminally unwelcome Michael Rooker’s first scene didn’t find his blue-skinned grump shirtless. (I already have enough grim memories from the actor’s cinematic oeuvre.) Kurt Russell employs his full, charming Russell-ness in the role of Quinn’s birth father, and there’s a lovely satiric poke at Field of Dreams when Quinn transforms a blob of glowing energy into the baseball that he and his long-lost dad can finally toss back and forth. A race of space beings led by an imperious Elizabeth Debicki resembles a cadre of Oscars the series has probably lost the hope of winning; an early siege, to amusing effect, mirrors the look, sound effects, and fawning arcade appreciation of a high-scoring game of Galaga.

But for my money, the film’s perks still aren’t enough to outweigh the crushing sentimentality of the oft-repeated “family is everything” theme (one that feels surgically inserted in the wake of Fast & Furious success), or the unmitigated blandness of the plotting, or the tonnage of characters with daddy issues (does every comic-book devotee feel unloved by Pop?), or the score’s constant barrage of Looking Glass and Jay & the Americans and The Midnight Special suggesting a two-hour-plus plug for the movie’s soundtrack. Or, yet again, the resounding genre familiarity, with the finale boasting our umpteenth universe-swallowing baddie and ticking red clock and pair of he-men punching the crap out of each other. To paraphrase a pop hit slightly too outdated for the Guardians of the Galaxy Vol. 2 repertoire, it’s the same old song, and with the exact same meaning since we’ve been gone. 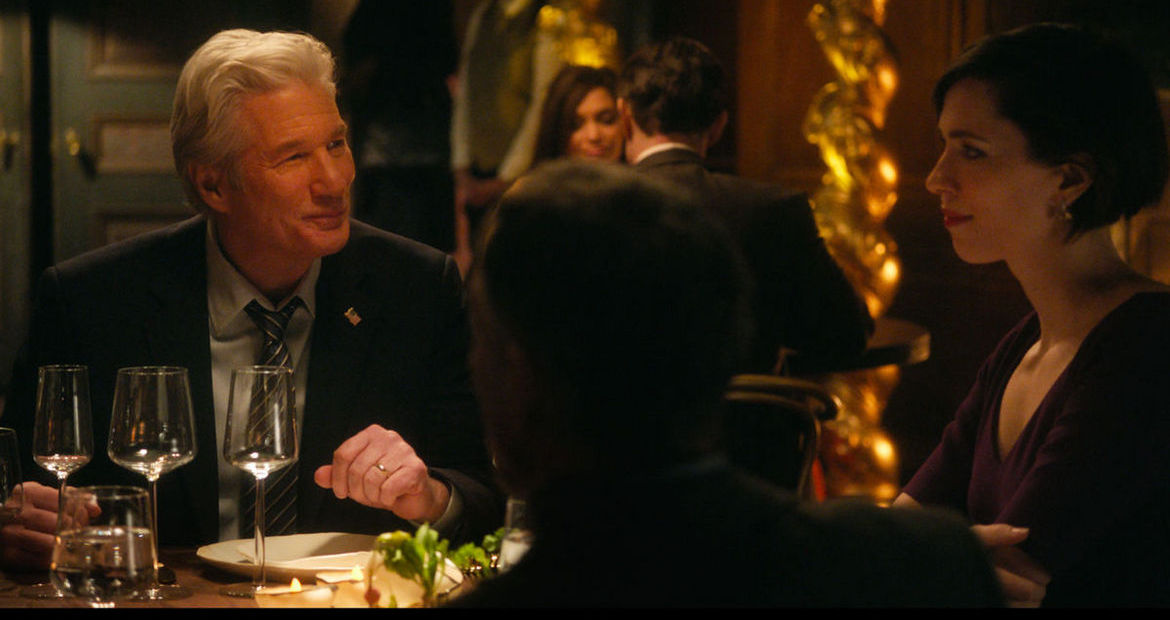 For some serious counter-programming to Guardians of the Galaxy Vol. 2 (and we’re talking deadly serious here), I would guide you to writer/director Oren Moverman’s family-dispute saga The Dinner. I would guide you there, that is, if the movie itself weren’t so resoundingly terrible. In outline, this chamber drama based on Herman Koch’s novel would appear relatively straightforward: Two couples – an aspiring governor and his wife (Richard Gere and Rebecca Hall), and the politician’s estranged, struggling-novelist brother and his wife (Steve Coogan and Laura Linney) – meet at an impossibly posh French restaurant to wrestle over a dilemma involving their sons, the kids’ responsibility for a brutal hate crime, and the event’s subsequent exposure on YouTube. Even if four-character melodramas aren’t exactly your bag, this sounds kind of fun, right? Potentially bitchy and nasty and boasting four performers you’ve probably enjoyed under even less-intriguing circumstances?

It is those latter things, but fun the film definitely isn’t, unless your definition of “fun” is somehow inseparable from “grossly contrived,” “profoundly confused,” and “gouge-your-eyes-out irritating.” Three of the headliners fare moderately well, with Gere sleek and unexpectedly empathetic as a congressman with an actual moral compass, and the great Hall and Linney spitting out thunderously vicious criticism behind veneers of surface politeness. (A couple supporting performers are solid, too, with Michael Chernus quite sweet as a put-upon maître d’ and Adepero Oduye believably beleaguered as the assistant who keeps handing Gere a cell phone.) But even though it’s only May and he’s only playing the character as written, I don’t think it’s too soon to predict that Coogan’s turn as an incessantly twitchy, blabbering megalomaniac will go down as the most thoroughly unappealing screen portrayal of 2017. While excruciatingly great pains are taken to explain that Coogan’s character is likely suffering from a hereditary mental illness, that doesn’t excuse Moverman from making the guy such a consistently noxious presence, one who can’t let three words from another pass without interruption and holier-than-thou moralizing. (Linney’s acting is never more magical – supernatural, even – than when she’s pretending screen hubby Coogan is irresistible.) And Moverman himself, an Oscar nominee who displayed considerable behind-the-scenes talent in The Messenger and Rampart, appears to be nearly as unhinged. From the maddeningly undeveloped flashbacks to the affluenza-shaming detours to the Gettysburg interlude that seems to last longer than the actual Battle of Gettysburg, The Dinner is lousy with giant swings resulting in even bigger misses, and I’m relatively sure the final shot would’ve led to half-empty sodas being thrown at the screen if I wasn’t the only one there, and if I had a soda. As if Moverman’s pretension here weren’t already apparent in his restaurant that’s roughly the size of the orgy mansion from Kubrick’s Eyes Wide Shut, he even gives the film’s loathsome individual sections French-menu title cards: “apéritif,” “appetizer,” “digestif,” and so on. Where was the title card for the vomiting course?