Saints and Sinners: “Infidel” and “The Devil All the Time” 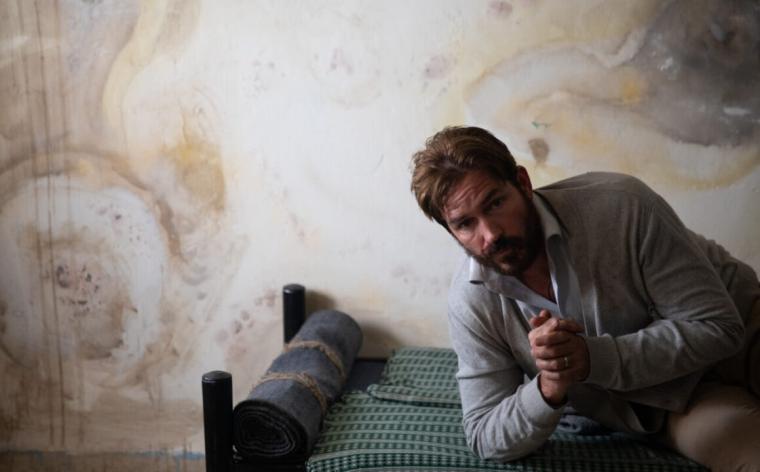 Blessedly, we're running out of months left to go in 2020, which means we're also running out of time for this year's movies to deliver a sequence so off-the-charts meta that it needs to be seen to be believed. But I think we may have landed on a winner in writer/director Cyrus Nowratesh's Infidel, where, not long into the film, a deeply religious man travels to Cairo for an interfaith forum on live TV, and winds up telling untold millions of Muslim viewers, “We love Jesus Christ. He is God. And he wants to be your God.” Not the wisest of ideas, as is made evident by the guest's subsequent kidnapping and torture by aghast Middle Easterners. What makes the scene almost canonically nutty, though, is that the guy espousing his unshakeable love for Christ is none other than Christ himself.

Okay, that's not entirely accurate. He's actually an American blogger named Doug Rawlins. But the actor portraying him is Jim Caviezel. And no matter how many Thin Red Lines or Person of Interests Caviezel makes, he's always going to be identified as He Who Was Jesus in Mel Gibson's The Passion of the Christ – which makes his casting in Nowratesh's political thriller so on-the-nose it may as well be a nostril.

Caviezel is current cinema's go-to guy for super-humanly devout figures, and also, apparently, for devout journalists in Nowratesh releases, having last appeared as one in the filmmaker's 2009 The Stoning of Soraya M. Yet while his performances are generally decent or better, Caviezel has a tendency to fall into self-righteous stoicism when he's not ably supported by his material, and Nowratesh's otherwise competent Infidel script tends to fall apart every time it mistakes Rawlins' sanctimoniousness for piety. Rawlins' wife Elizabeth (Claudia Karvan), who works for the U.S. State Department, hits the nail square on the head when she calls her husband “preachy” and tells him that his quiet belligerence “weirds people out.” But the faith that Caviezel projects here isn't weird so much as tiresome. Although you don't want to witness Rawlins' eventual abuse (first in Egypt, then in Iran), you also wouldn't mind if this dreary martyr just lightened up on the platitudes once in a while. 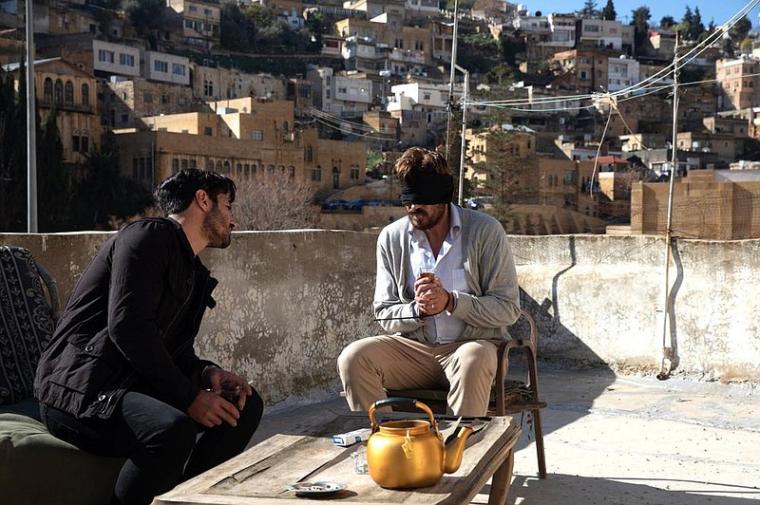 Still, Infidel – which primarily concerns Elizabeth's efforts in finding her missing spouse and bringing him back to the states – isn't bad, even though there was every reason to expect it to be. Not having extensively researched the movie prior to seeing it, I was taken aback, or perhaps more accurately appalled, at the opening-credits reveal of sensationalist supreme Dinesh D'Souza as one of the film's executive producers, and his production company D'Souza Media responsible for its distribution. For my money, one of the biggest perks to cineplexes being closed for so long was the complete absence of Dinesh D'Souza titles, and I readied myself for an “entertainment” as ham-fisted in its conspiracy theories and noxious sense of entitlement as his far-right screeds 2016: Obama's America and Hillary's America: The Secret History of the Democratic Party. Thanks to Nowratesh's professionalism, however, Infidel isn't hysterical. It's maybe as close as a D'Souza project will ever get to subtle.

Nearly every time you feel the movie veering toward uncomfortable religious hagiography or outright anti-Muslim bigotry, Nowratesh course-corrects with a welcome grace note – an effective bit of action-thriller choreography, an impressively shot locale, a cynical punchline delivered by MVP co-star Hal Ozsan – that lightens the collective load. (Even the first-rate Karvan's frequently eerie resemblance to Emma Thompson helps make this potentially dismal sit a diverting one.) And rather miraculously for a D'Souza production, narrative shoes that seem poised to drop with a huge thunk! instead land quietly, and in sometimes unusual places. Despite our early understanding of Elizabeth as someone who has lost her faith and desperately needs to finds it, nothing that happens over the course of the film suggests that she ever does, or ever will – and this is a woman married to Jim Caviezel, for God's sake! With its tale of staunchly pro-Christian affirmation and devotion under unimaginable duress, Infidel's targeted demographic will no doubt be engrossed and moved. Yet in its admirable willingness to see those with differing viewpoints as equally worthy of consideration and empathy, this unexpectedly gripping work holds up just fine for a general audience of heathens, too. 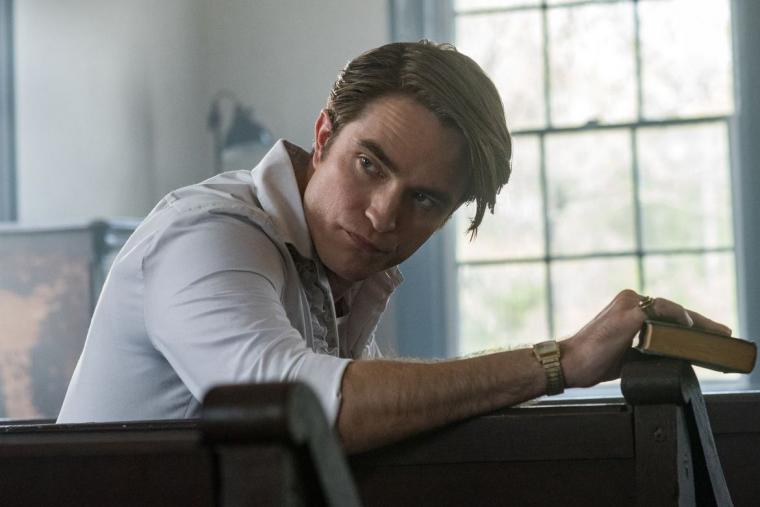 THE DEVIL ALL THE TIME

It was recently announced that the superhero sequel Wonder Woman 1984 that was originally scheduled for early summer, and then moved to August, and then scooted to October, would now, and for now, be making its debut on Christmas Day. Clearly, these are dark times for comic-book-movie fans. Leave it to Netflix, though, to attempt to perk up their spirits, because in writer/director Antonio Campos' recently released The Devil All the Time, the Marvel and DC brigades can enjoy a feature that employs the actors presently playing Spider-Man, Batman, and the Winter Soldier! Of course, viewing the film does mean you'll have to watch Spider-Man shoot a woman in the throat, and watch Batman molest a teenage virgin, and watch the Winter Soldier receive a hand job in the front seat of his car, but you know … . Beggars can't be choosers!

And I hope Netflix audiences do choose to check out Campos' and co-screenwriter brother Paulo Campos' repellant yet transfixing Gothic potboiler, even if, initially, just for the dirty pleasures of seeing Tom “Spider-Man” Holland, Robert “Batman” Pattinson, and Sebastian “Winter Soldier” Stan embrace their nasty sides. I'm not going to enter the obscene rabbit's hole of trying to explain the plot, which would require hundreds more words than I have patience for, and that basically boils down to “poverty + religion + serial killers = bad times for all.” (The 2011 Donald Ray Pollock novel the film is based on is apparently 272 pages long, which suggests the presence of about five new narrative incidents and three new characters per page.) What I will say, though, is that even though the Devil All the Time material is upsetting as hell, I couldn't take my eyes off this thing. Director Campos comes through with such arresting imagery, and there's such detached comic wryness in Pollock's off-screen narration, and the performers attack their roles with such committed relish, that the movie's deliberately paced 135 minutes seemed to go by in a flash.

You probably won't want to get too attached to any of the sinners or saints in the Campos brothers' rural Ohio and West Virginia, given that even with an ensemble boasting familiar presences Jason Clarke, Riley Keough, Mia Wasikowska, Haley Bennett, Eliza Scanlen, Harry Melling, musician Pokey LaFarge, and the It clown Bill Skarsgård, characters tend to violently vanish from this '40s-'60s period saga long before you're ready to see them go. But even the minimal time spent in their company is worthwhile, and with the screenplay featuring one horrific twist after another, the deliriously cascading syllables of Pattinson's readings might offer the biggest twists of all. Playing just about the worst of sinful preachers, his voice sounds like a grating whine mixed with a croak mixed with a squeal, and it would all be much too much if Pattinson's dark-comic confidence wasn't so enthrallingly enjoyable. I'm looking forward to his Batman, but certainly wouldn't complain if Pattinson decided, after hanging up his cape, to play the devil all the time.