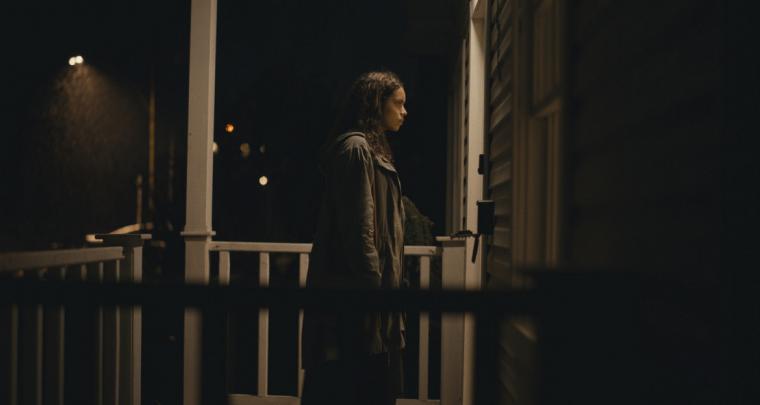 A couple weeks ago, in my review of The Invitation, I opened by saying that the fright flick felt like a bunch of different fright flicks – none of them good – rolled into one. Writer/director Zach Cregger's Barbarian feels a bit like that, too, except in this instance, the quality is significantly higher, and not all of the complimentary/competing movies are horror movies.

Yes, there are doors that mysteriously open and close, and dimly lit treks down creaking stairs, and an unseen, lurking … something … that appears to be up to no good. But if you randomly walked into any five minutes of Cregger's film, you could easily be fooled into thinking it was actually a horror parody, or a #MeToo-themed indictment, or a satiric revenge thriller, or even – no kidding – a pretty excellent rom-com. I'm not convinced that all of these mini-features are entirely successful, and I don't think they coalesce in a way that benefits Barbarian as a whole. (Given the movie's current 93-percent freshness rating on Rotten Tomatoes, I'm clearly in the minority on that.) Still, this unexpectedly clever, presentationally adventurous little shocker is worth seeing, and hints that Cregger might one day be (if he isn't already) a significant genre talent in the vein of Jordan Peele and Ari Aster.

As Barbarian opens, it's a rainy night in a run-down Detroit neighborhood, and Tess Marshall (Georgina Campbell), in town for a job interview, has just shown up outside her Airbnb. After some hassles with the security code and her discovery that the front-door key is missing, she considers leaving until the door opens, and a groggy young man (Bill Skarsgård's Keith Toshko) asks what she's doing there. The rental home, it turns out, has been double-booked, and rather than leave Tess to fend for herself, Keith invites her inside to call the rental agent, or see about hotel accommodations, or simply get out of the rain. As a single young female facing a total stranger in unfamiliar surroundings, Tess knows this is a bad idea. Yet she also seems like someone who can take care of herself in tough situations, and this Keith guy appears harmless enough, so in she goes, with Creggers' camera panning from the house's exterior to its interior in a way that implies Alice entering Wonderland. Lewis Carroll, however, this definitely ain't.

Generally speaking, I'm grateful whenever characters in horror movies behave like they've actually seen a horror movie. Tess, in truth, perhaps missed a few. (She wanders around an unilluminated basement way longer than any sane person should.) But the first 20-or-so minutes of Barbarian are enormously satisfying not only because Campbell and Skarsgård share crackling chemistry, but because Tess' and Keith's wary yet not unfriendly getting-to-know-you suggests that they both recognize the slasher-flick conceit of their unusual circumstances. They consequently act accordingly. Tess, taking no chances, photographs Keith's driver's license and makes sure that with every room she enters, she locks the door behind her. Keith, noticing the untouched cup of tea he prepared for Tess and wanting to put her at ease, opens a bottle of wine in her presence so she'll know he hasn't slipped her anything. Campbell and Skarsgård performed this delicate, apologetic pas de deux with such winning charm and near-romantic playfulness that I was silently, and uselessly, praying that Cregger's film wouldn't turn into the fright fest we were promised. But then, of course, it did. And then, astonishingly, it didn't. 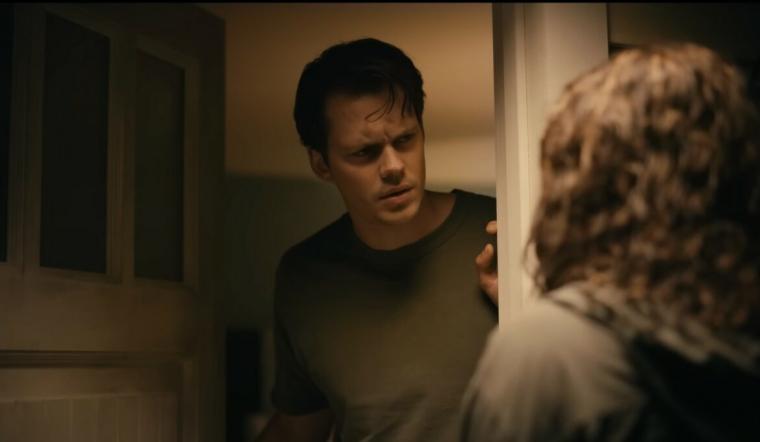 I'm not sure how much more I can detail without getting into serious spoiler territory. Avoiding specifics, though, I will say that if you saw the trailer and think you have a handle on what kinds of hidden-catacombs terrors will transpire, that trailer only touches on maybe the first 30 of Barbarian's 105 minutes. You might not even know that Justin Long is in the movie – and in a major role, to boot! In one of the stranger narrative detours in recent releases, the events in Detroit are, after the opening half-hour, completely abandoned for a seemingly extraneous plotline involving Long's AJ Gilbride, a smarmy Hollywood actor who's just been fired in the wake of a sexual-harassment allegation. How this connects to the happenings at the Michigan Airbnb I'll leave to your imagination. I also won't get into the extended flashback set roughly 40 years ago, which basically serves as the rental property's origin story. You can pinpoint a number of Cregger's influences regarding its horror angle: The People Under the Stairs, The Descent, Parasite. But the writer/director's chief inspiration appears to be, of all things, Pulp Fiction. The chronology shifts, the genres change, the unrelated characters become intertwined, and just when you think you're on solid ground, your bearings are lost yet again.

It would be wonderful to say that Cregger's experiment was a home run. Unfortunately, while the Justin Long business yielded some of the bigger laughs I've enjoyed this year, AJ is such an odious, overripe cartoon that his presence nullifies any chance of genuine fright; it's hard to fear for a figure you're more than ready to see die a hideous death. The #MeToo element is dropped into the mix with such lack of subtlety that the film briefly threatens to turn into a grad-school thesis paper. And even when Cregger's script is following a more-or-less-standard blueprint, too much is left unresolved, and even forgotten about. Was the double-booking of the Airbnb truly an accident? Is there a supernatural presence opening and closing all those doors? Are Tess and Keith the first guests to ever book the place?

These and a bunch of other redacted questions – none of them satisfyingly answered – bothered me more and more as Barbarian progressed, and went on to follow me during the drive home. But Campbell and Skarsgård and the film's first third are absolutely worth watching, and Cregger is most certainly a talent to keep an eye on, and there are some classic throwaways for horror-flick fans, as when Keith grins and innocently asks Tess, “Do I look like a monster to you?” That's awfully scary/funny coming from the dude who played Pennywise in It. 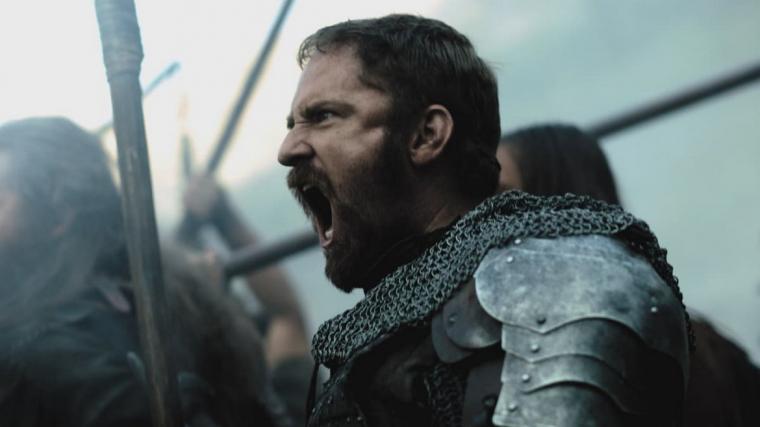 The highest compliment I can pay writer/director Petr Jáki's über-violent historical drama Medieval is that, over the course of its two hours and five minutes, I never once yawned. Let me stress what a staggering compliment that actually is, because I'm the type whose eyes instinctively glaze over at the prospect of watching 15th-century European rulers whom I've never heard of warring over rights to the throne and tracts of lands and the fates of countless dirty-faced peasants and … . And I'm boring myself just typing this. (A Braveheart fan I am abjectly not.) But Jáki's English-language Czech epic, which concerns the ascent of the apparently legendary Bohemian military commander Jan Žižka, proved to be a fairly decent time, and might be a lot of brain-splattering fun for those who dig this sort of thing.

Right off the bat, Jáki did several things I was grateful for. He allowed his globally diverse cast to converse in their natural voices, meaning that instead of everyone speaking with imposed Czech accents – or, more predictably and annoyingly, the standard British so often employed for works set in any European region – we got to hear a pleasing, non-distracting assortment of Czech, British, German, Danish, and American dialects. (The first words of voice-over we hear come from that Cockney great Michael Caine.) He gave us Ben Foster as Žižka, the actor's natural gravity and thousand-yard stare ideal for tortured-hero duties. He avoided an overabundance of laborious setup before plunging us into a ferocious battle sequence – and given the reams of history covered, this thing could've been deathly talky. And best and most surprisingly of all, Jáki gave us jokes, starting with a terrific one involving the safety of Caine's Lord Boreš, whom the performer wisely played as a sage and lovable crank.

As for the rest of the film, due to my inherently short attention span regarding anything involving swords and suits of armor and no access to indoor plumbing, I don't remember much beyond Jáki's film being almost upsettingly gory. (I really hoped that the one image that lingered wasn't going to be that of Žižka's teenage nephew whimpering and bleeding out while dangling from a pike, but alas … .) All told, it's a pretty generic piece of filmmaking, with Til Schweiger, Matthew Goode, Sophie Lowe, and others delivering the exact portrayals you expect from their introductions, and even the bloody combat too incoherently edited to offer much excitement. Yet Medieval's narrative was unexpectedly engaging on a scene-by-scene basis, there's a fair amount of grim humor peppered throughout the gravitas, and Jan Žižka does effectively feel, now, like a historical figure I'm glad I'm aware of, and one eminently deserving of his own movie. I wish it had been a more memorable movie, but hey – I didn't yawn! That in itself might ultimately make the experience memorable.