“Screw”-ed: “The Turning” and “The Gentlemen” 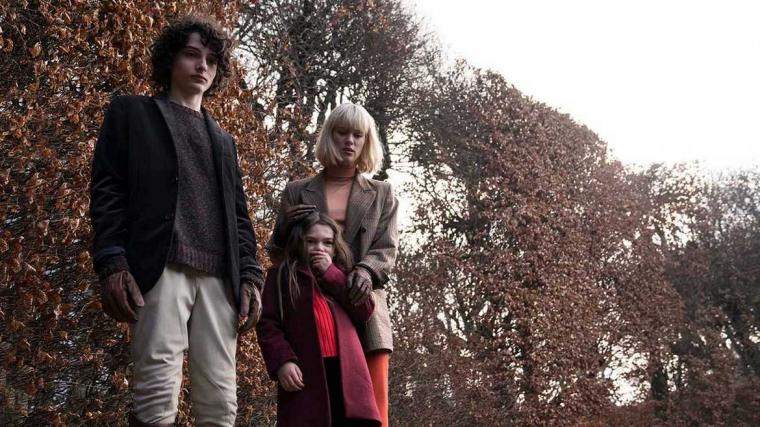 Finn Wolfhard, Brooklynn Prince, and Mackenzie Davis in The Turning

It's based on Henry James' seminal The Turn of the Screw, the 1898 horror novella that helped shape the genre and inspired adaptations for film, television, stage drama, radio, opera, and even ballet. It stars Mackenzie Davis, the beautifully down-to-earth performer from Terminator: Dark Fate and Tully and that classic Black Mirror episode “San Junipero.” It co-stars two talented, in-demand youths: Finn Wolfhard, familiar from Stranger Things and the Its, and Brooklynn Prince, who headlined the 2017 Oscar nominee The Florida Project at the ripe old age of six. And with its suitably shivery décor and apparitions, it's directed by Floria Sigismondi, a visual stylist with a long résumé who has helmed videos for, among many others, David Bowie, Justin Timberlake, Marilyn Manson, and Pink.

And yet, this past weekend, The Turning became only the 21st wide-release movie – though the second in three weeks (after The Grudge) – to ever receive an “F” grade from audiences as reported by CinemaScore, the market-research firm that has been polling crowd reactions for more than two decades. Why was the grade for this timeless haunted-house tale so abysmal? And why, despite the film's considerable strengths, was it kind of deserved?

Though the setting has shifted from the late-19th century to 1994, the better to account for the modernity of the dialogue and the absence of cell phones, Henry James' original story hasn't much changed (up until the ending, that is). Again, a young woman (Davis' Kate Mandell) is invited to a mansion's vast estate and hired as live-in teacher to a pair of orphans: Miles (Wolfhard), who's around 13, and Flora (Prince), who's around eight. A strict housekeeper (Barbara Marten's Mrs. Grose) explains that the children's previous caretaker, Miss Jessel, disappeared under mysterious circumstances, and that there also used to be a riding instructor, Quint, who met an untimely demise. Flora seems bright and well-adjusted; Miles, recently sent home from boarding school, seems bright yet supremely maladjusted. And while Miles' troubling behavior and the kids' penchant for practical jokes would make Kate's new career path trying enough, they're nothing compared to Kate's growing certainly that she's losing her mind – just as her hospitalized mother (Joely Richardson) did – once she starts seeing spectral visions of Miss Jessel and Quint on every reflective surface of the house.

While this is all pretty standard ghost-story stuff in 2020, there's nothing remotely offensive about it, and you'd be hard-pressed to condemn The Turning's performances. Davis, as always, brings a luminous naturalism and empathy to the proceedings, and she's completely matched in that regard by Prince, who's so irrepressibly, comically buoyant and unpredictable early on that traditional Gothic thrills seem less unlikely than impossible. (Prince has an incredibly rare pre-teen gift for making all of her scripted dialogue sound unrehearsed.) Marten is effectively inscrutable and spooky; Richardson is raw and unrecognizable; Wolfhard, though in danger of seeming over-exposed (he's also a lead in the forthcoming Ghostbusters reboot), plays messed-up-horny-teen to the subdued hilt. Director Sigismondi, meanwhile, does particularly fine work with her images of the ephemeral undead, which tend to appear and disappear like smoke from a pipe. 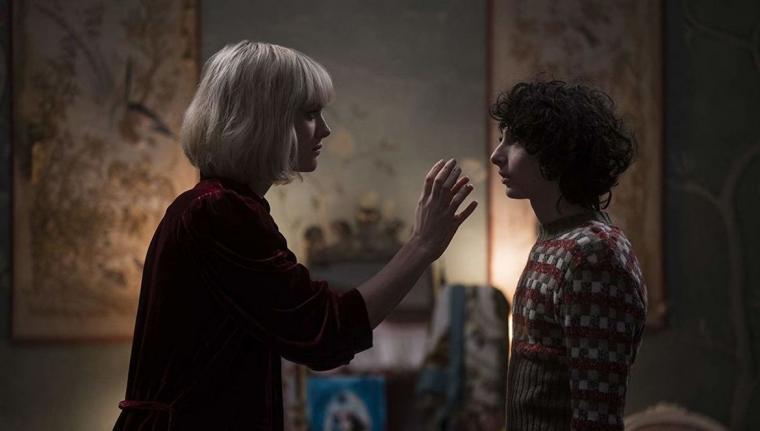 None of these elements hint at an eventual “F” grade, and there are also satisfying nods to the mid-'90s grunge scene and a nice in-joke when, asked by Mrs. Grose if she's ever been a governess before, Kate sardonically replies, “Not since the 1800s.” But while you can get away with a lot in a movie – especially a horror movie – designed for mass consumption, there are three things an audience won't easily forget or forgive: stupidity, pretension, and a terrible ending. The Turning, I'm sorry to say, is saddled with all three.

The stupidity comes, primarily, from Kate's refusal to simply get in her car and drive away from the supernaturally plagued estate. I know, I know: “Get out of the house!!!” is a command that has been issued by scare-flick crowds, and ignored by scare-flick heroines, since the dawn of horror. The Turning, however, truly tests your patience for genre stubbornness. On her first night in the mansion, Kate is already seeing ghosts, hearing loud bangs in unoccupied rooms, and enduring the leering ickiness of Miles, who, at 13, already seems primed for rhythm-guitar duties in a KISS cover band. By day two, the spirits continue to pop up, Mrs. Grose has let the “passive” drop from her passive-aggressive hostility, and Kate is awakened by a bedside visit from Miles, who halfheartedly explains his touching of her (“There was a spider on you”) and steals a kiss before exiting. And then, not a few hours later, Kate falls victim to a hideous prank initiated by both Miles and Flora, suggesting that the adorable little girl might be just as monstrous as her brother. Kate's decision to remain is tossed off with some backstory involving her mother and a promise she made to Flora in the first hours of meeting her – this despite Kate also witnessing Flora's screaming fear over leaving the grounds and Miles crushing the head of a Koi with his boot heel. But Mackenzie Davis' evident intelligence works against her here. Under this film's conditions, no one would conceivably stick around, and Kate's unconvincing choice to do so makes her seem like both a masochist and a grade-A moron.

Pretension rears its ugly head through two narrative detours that audiences traditionally hate: the old dream-within-a-dream trick, and an extended fantasy sequence that we realize is fantasy only after the fact – a nonsensical trek down a meaningless rabbit hole. As for the terrible ending, which is also rife with presentational pretension, it may be the most actively galling horror-movie finale in recent memory. It's not just that the climax doesn't give us closure; it actually feels like a good 15 or 20 minutes of movie got misplaced, and, unable to find them, Sigismondi opted instead to simply tack on the closing credits and call it a day. (The film's “action” continues over those credits, and because I was fool enough to remain in my seat 'til the bitter end, I can assure you that the final minutes do nothing to make the overall experience better, or even comprehensible.) Maybe The Turning doesn't deserve its “F,” but as I recall from school, a “D-” wasn't anything to celebrate. 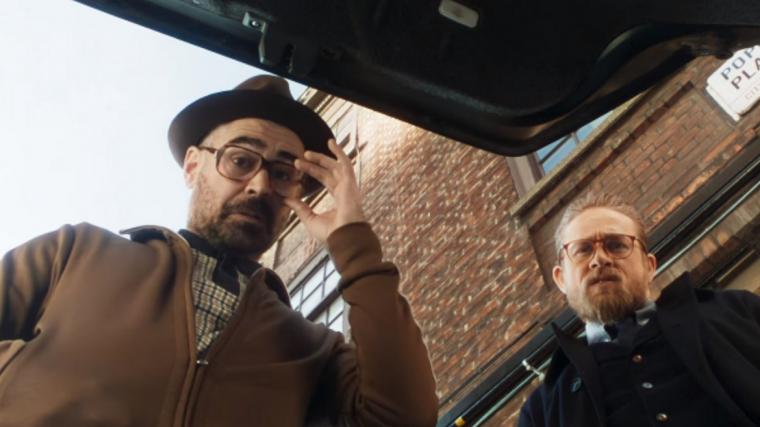 After the dismal Disney blandness of his Aladdin last summer, I wanted nothing more from Guy Ritchie, quite possibly forever, than for him to return to his cinematic beginnings of the Lock, Stock, & Two Smoking Barrels and Snatch variety, treating us to the enjoyably seedy, frequently unintelligible exploits of British lowlifes who connive and kill and battle over who can spit out the C-word with the greatest venom and frequency. Is it possible that Ritchie himself felt the exact same way? The writer/director's serio-comic crime thriller The Gentlemen is a return to those disreputable entertainments of yore, but also, it appears, a rebuke to the entire notion of multiplex-friendly do-goodery. It's one thing for him to cast Matthew McConaughey as a hardcore investor in weed (surprise, surprise) and the typically dyspeptic Eddie Marsan as a noxious tabloid publisher who does unspeakable and blessedly unseen things with a hog. But why else would Ritchie cast Charlie Hunnam, his heroic King Arthur from 2017's Legend of the Sword, as a small-time enforcer with a corpse in his freezer? Or Crazy Rich Asians sweetheart Henry Golding as a profane killer with anger issues? Or Michelle Dockery – Lady Mary, no-o-o-o-o!!! – as a Cockney tough talker who's a crack-shot with a gold-plated paperweight?

All told, it should probably go without saying, I had a terrific time at Ritchie's latest, especially after 20 minutes had passed and it became clear(er) who the (too-)many characters were and what, precisely, their roles were in this labyrinthine game of drug lords looking to control an English empire of subterranean marijuana farms. Ritchie's obvious yearning to provoke, as it often does, comes off as too self-consciously naughty; the hard-R repartee is somewhat exhausting, and while it's nearly always a pleasure to see Jeremy Strong on-screen – especially, nowadays, in HBO's Succession – I could have done without his affected feyness as an ultra-powerful American dandy. The writer/director's self-references are also a bit much, given that the ale on tap at the local pub is branded “Gritchie,” and the set dressing includes the poster from Ritchie's 2015 non-blockbuster The Man from U.N.C.L.E. (I half-expected a Madonna cameo … though I totally get why there wasn't one.) But the plot is satisfyingly twisty and the minor bits are enormous fun, particularly when a bunch of gun-toting goons enter a room like circus clowns spilling out of a Volkswagen. Plus, amongst an acting ensemble in which everyone in The Gentlemen seems to be having a blast playing uncontested scumbags, two performers especially stand out. Hugh Grant, grinning like the Cheshire Cat behind tinted shades, is riotously funny as a louche, motor-mouthed Cockney investigator whose tactics, including baldly hitting on Hunnam, imply that journalists might exist comfortably in the ninth circle of Dante's Hell. (No comment.) And Colin Farrell, as an inspirational bad-ass known only as Coach, is hilariously low-key perfection, sweetly desperate to make amends and, at one point, swatting a knife out of an assailant's hands as if telling the guy, “I don't have time for this nonsense.” Thank goodness that Guy Ritchie, on occasion, still does.